Objective: To study the relation between cracked teeth with different cusp inclination and maximum resistance strength.

Materials and Methods: Seventy maxillary premolars were randomly divided into four groups. Groups 1, 2 and 3 were made into models of cracked teeth with different buccal and palate cusp, respectively, while group 4 was the control group (untreated). Compression testing for the four groups was carried out using an electronic universal testing machine. The maximum resistance strength when the teeth cracked was recorded.

Cracked tooth, known as cracked tooth syndrome, is the incomplete fracture of premolars or molar dental crown (sometimes the pulp is also affected due to the fracture) [1]. Epidemic studies have shown that cracked teeth have become the 3rd major cause of tooth loss, after dental caries and periodontal disease in developing countries [2]. The clinical symptoms of cracked teeth become more severe as the crack depth increases. When the crack is comparatively deep, the prognosis is often poor. When the crack is slight, symptoms are not obvious. Thus, the prevention of crack teeth is extremely important. Currently, studies from home and aboard are focused on the symptoms of patients and treatment methodology while basic studies on root causes and pathogenesis, which have serious impact, are overlooked. In the present study, the compression test was carried out using an in vitro model of tooth cracking. The effect of different cusp inclinations on fracture and the risk of high inclination cusps are evaluated.

According to Geurtsen et al. the lower molars were the most susceptible to crack formation, followed by maxillary molars and mandibular premolars which are the least susceptible [2].

The surgical clinic of Xuzhou Stomatological Hospital Affiliated to Xuzhou Medical University provided 70 teeth from 18-25 year old patients, that were removed for orthodontic purposes and who had signed the informed consent.

The cusp inclination of teeth in vitro was measured using RVG digital X-ray film. The average buccal cusp was 49 ± 1.6°, while the average palatal cusp was 40 ± 1.9°. The 95% confidence intervals of buccal cusp and palatal cusp were (48.6°, 49.3°) and (39.7°, 40.3°), respectively, according to statistical analysis. To decrease deviation, 40 teeth, which fell into the 95% confidence intervals, were selected among the 70 teeth collected. The soft tissue and calculus were removed from the surface of the teeth, and were immersed in normal saline at room temperature for future use.

Treatment for teeth in vitro

Teeth were grouped as followed: the first 3 groups consisted of cracked teeth, separated by degree of buccal cusp and palatal cusp inclination. Group 4 was the control group (Table 1).

Table 1. Grouping of teeth according to cusp inclination. 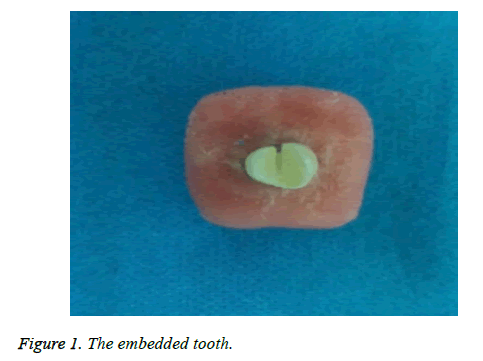 We carried out biting inspection on the plaster casting of cracked teeth preserved in the laboratory, using silicon rubber. The contact points of cracked teeth in the biting inspection were complex. The general rule was that the contact point in biting was usually in the 1/3 mid-bottom part of the tooth slope. By measuring and analyzing the distance among tooth slopes, a 3.5 mm-diameter stainless steel loading head was selected. The loading head would touch the buccal and palatal cusp and the contact point was around the 1/3 mid-bottom part of the tooth slope.

SPSS16.0 software was used for data analysis (to compare the maximum resistance strength among each group). Single factor t-test was used for comparisons between groups (α=0.05).

Table 2. Rounds of comparison of the maximum resistance strength among all groups.

The relation between cusp inclination and resistance strength 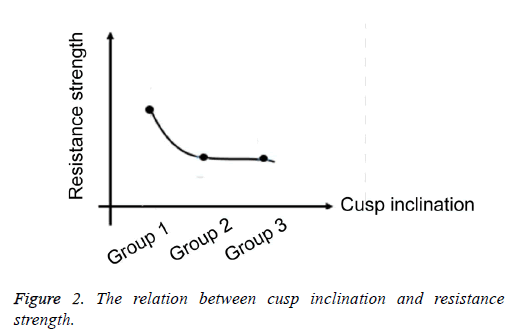 Figure 2: The relation between cusp inclination and resistance strength.

In the present study, the RVG parallel projection method and a caliper were used to measure the anatomic shape of teeth, from which there were no differences with measurement by digital X-ray film. Thus, the measurements we obtained are consistent with those by Hailiang et al. [8]. Compared with CT, RVG digital imaging is easier to operate, cheaper and more frequently used clinically. With parallel projection technology, the distortion rate is lower. It was therefore feasible for measuring cusp inclination in this study.