Guava is most popular and commonly available plant all over the India. This study is about the evaluation of in vitro antioxidant activity of Psidium guajava Linn. The leaves and bark of the Psidium guajava Linn. are used for study of the antioxidant activity. Ethanolic extract of these leaves and bark is used for this evaluation study. Nitric oxide and DPPH methods are used to evaluate free radical scavenging activity.

Modernisation has made many changes and modifications in the lifestyle of society, resulting in drastic increase of several disorders and diseases. Various studies have reported that consumption of good diet (vegetables, fruits) is necessary in reducing the riskfactor of many dieases [1-3].

Plants have been used for medicinal purpose from ancient times. Among many countries, India is one of the richest ancient repositories of medicinal plants. From the time of immortal Medicinal plants are used in treatment of many diseases, they are considered safe and effective. These remedies are in syn. with nature, which is biggest advantage.

Traditional medicines have deep roots in culture of ancient heritage. Ancient scholars believed that herbs are only solution for many health related problems.

The constituents of guava include vitamins, tannins, phenolic compounds, flavonoids, essential oils, sesquiterpene alcohols and tri terpenoid acids. Some of the therapeutic activities of Guava leaf extract are analgesic, anti-inflammatory, antimicrobial, hepatoprotective and anti-oxidant, due to the presence of phenolic group.

Leaves and bark were used for the ethonolic extraction to identify the antioxidant activity from the plant which was collected during the month of july 2010 from vaageswari college of pharmacy, Karimnagar, Telangana under the guidance and authentication of Dr. Jayaraman, director of Plant aatomy centre (PARC), Tambaram, Chennai. A voucher specimen No. PARC /2010/594 has been deposited for further reference.

Shade dry and coarsley powder the Leaves and Bark of Psidium guajava Linn.. Concentrate around 300 gm of powdered medication with ethanol by cold maceration method, after 72 hrs of maceration filtration was followed [4,5]. After entire extraction, the concentrate was focused by refining off the dissolvable and afterward utilizing vaccum flash evaporator. The concentrate was dissipated to dryness under diminished weight. Using high polarity solvents like chloroform, petroleum ether, ethanol the yield was extracted. After which the fractions where evaporated. Its colour and consistencies were also observed Under vaccum. Percentage yield was calculated on air dried basis [6,7].

Oxidation is one of the important biological processes for the production of energy in living organism. Living organisms uses oxidation for the production of energy to fuel biological processes [8-10]. A variety of physiological and biochemical lesions increasingly deteriorate degenerative diseases such as aging, cancer and coronary artery disease due to free radicals Despite of anti-oxidant defence and other defence mechanism in human these systems are insufficient to prevent the damage entirely. Antioxidants are the substances that can inhibit or restrict oxidative cellular oxidizable substrates.

About 0.1 mM DPPH crystalline solid was taken in test tube, slowly dissolve the crystalline using organic solvent like methanol to form a solution.

The ethanolic extraction, standard (vitamin c) and control (without the test compound but with an equivalent amount of methanol) with a different concentration (50,100,200,400,800,1000 μg/ml) of about 3 ml each were taken in test tube [11,12]. To this ethanolic extract add 1 ml of DPPH solution slowly. Shake the concentrate solution and enable it to remain at room temperature for about 30 min and the absorbance was measured at 517 nm using a spectrophotometer. The IC50 value (half of inhibitory focus in μg/ml) was compared with standard solution i.e., vitamin C. Free radical scavenging activity is identified by the decrease in the absorbance of the reaction mixture [13-15].

The percentage inhibition of DPPH radical was calculated using the formula,

Nitric oxide was generated by sodium nitroprusside and measured by Griess reaction. Sodium nitroprusside (5 mM) in standard phosphate buffer saline solution (0.025 M, pH: 7.4) was incubated with different concentrations of ethanolic extact (50, 100, 200, 400, 800, 1000 μg/ml), Vitamin C as reference standard (50, 100, 200, 400, 800, 1000 μg/ml) and dissolved in phosphate buffer saline (0.025 M, pH: 7.4) and the tubes were incubated at 250C for 5 hr [16-19]. Control experiments without the test compounds but equivalent amounts of buffer were conducted in an identical manner. After 5 hours, 0.5 ml of incubation solution is removed and diluted with 0.5 ml of Griess reagent (1% sulphanilamide, 2% O-phosphoric acid and 0.1% naphthyl ethylene diamine dihydrochloride). The absorbance of the chromophore formed during diazotization of nitrite with sulphanilamide and its subsequent coupling with naphthyl ethylene diamine was read at 546 nm. All the determinations were performed in 6 replicates. Percentage inhibition of nitric oxide radical was calculated by using the formula:

A positive remark for saponins, Flavonoids, Phenplic compound and Steroids were identified using phytochemical test in the Psidium guajava leaf (Tables 1-5, Figures 1 and 2). 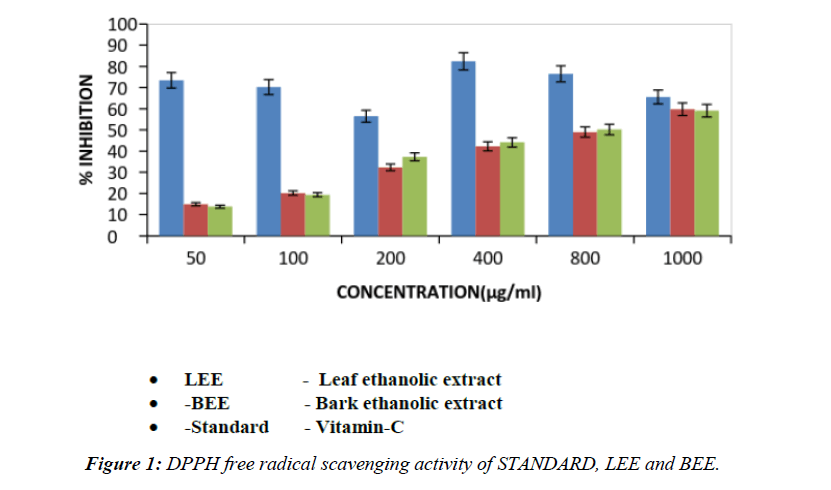 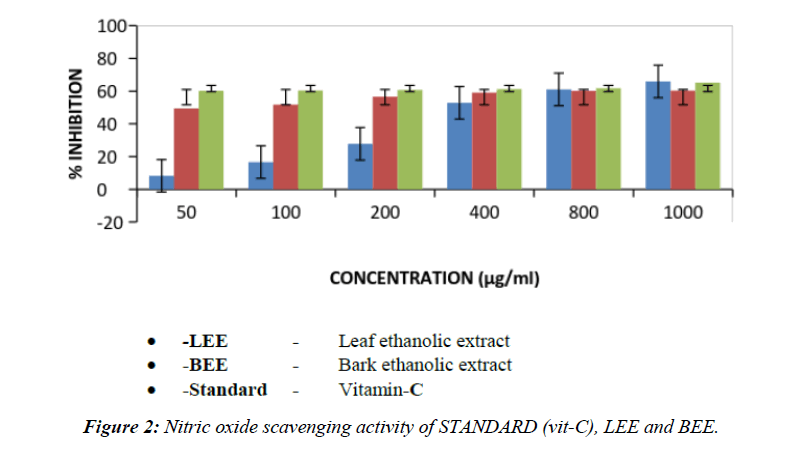 Psidium guajava Linn. is classified under family: Myrtaceae. It is a widely spread throughout the India and possess some therapeutic activities like antiseptic, antihelmintic, wound healing and in inflammatory conditions [20,21]. Some of the studies suggest that it contain of high amount of of ethanolic extract substances. Hence the present research emphasis on isolation of ethanolic extract and its evaluation for antioxidant activity. The young leaves juice is used to treat the imbalances of the digestive function. It is also said to be a remedy for the toothache.

Mammalian cells produce nitric oxide in form of free radicals, which is involved in the regulation of various physiological reactions [22]. Under aerobic conditions nitric oxide is very unstable species. Nitric oxide when undergoes metabolism, produce nitrate and nitrite as an end product through intermediates. It is estimated by using the Griess reagent and in presence of test compound which was the scavenger.

In the present research, sodium nitroprusside in standard phosphate saline buffer at 25°C was incubated to produce nitrite. It was estimated that due to the presence of ethanol, free radical scavenging property can be produced using the above method.

DPPH assay is considered as a valid method to evaluate scavenging activity of antioxidants, since the radical compound is very stable and do not have to generate as in other radical assays. DPPH radicals react with suitable reducing agents and then electrons become paired off and the solutions loses colour stoichiometrically with the number of electrons taken up. such reactivity has been widely used to test the ability of plant extract to act as free radical scavengers. DPPH assay of ethanolic extract showed a dose dependent increase in the percentage of inhibition of free radicals [23,24]. The ethanolic extract fraction was found to show a good antioxidant potential.