In house developed SEVATB ELISA for ruling out tuberculosis in suspected cases of Extra Pulmonary Tuberculosis, a six month Retrospective study in a tertiary care hospital.

An increasing trend was observed in extra pulmonary tuberculosis during last decade due to HIV infection [1]. EPTB constitutes almost 15-20% of all cases of tuberculosis while it is more than 50% in HIV positive individuals [2]. Many factors such as difficulty in a reliable test, drug administration for long duration, nonresponse to treatment, HIV infection and recently multi drug resistant and extensively drug resistant tuberculosis are contributing for lack of success in its management and control. Main challenge in EPTB is the difficulty in precise diagnosis as it has number of ways of presentation as per the involvement of organ. It has been observed that most of the patients with EPTB have generalized symptoms like fever, weakness, loss of appetite, etc. Many times patient may come with repeated fever i.e. pyrexia of unknown origin and mostly disease in obscure site [2]. These are conditions where clinicians are really in stressful dilemma in confirming diagnosis as well as starting ATT treatment. The existing gold standard test for confirmation of tuberculosis is AFB screening in specimen samples of EPTB cases. However procuring specimen samples is difficult in all EPTB cases as these cases have atypical presentations, and may yield poor positive yield. Another diagnosing aid, X-ray cannot differentiate soft tissue abscess and swelling due to tuberculosis. Improved version of culture media like BACTEC and MJIT are not much popular as they require expert personnels and are costly to maintain in resource limited hospitals. Due to lack of standard diagnostic protocol for extra-pulmonary tuberculosis and number of obstacles for reaching exact diagnosis result in involuntarily delays for starting ATT treatment. It is also equally important to consider diagnosing possibility of EPTB with AFB negative cases. HIV positive patients with AFB negative tuberculosis are generally more immnunocompromised and mortality rates are more in them demanding alternative approaches of diagnosis. All these reasons demand a sensitive, reliable, simple, cost effective test, and it should not depend on the immune response of subject in particularly immunocompromized HIV cases for diagnosis of extra-pulmonary tuberculosis. In our earlier study we have demonstrated usefulness of SEVA TB ELISA in diagnosing TB infection as a adjunct test in addition to other laboratory investigations [3]. In this study we evaluate study the usefulness of SEVA TB ELISA negativity in ruling out TB infection and solving the dilemma of clinician whether to start or not ATT in suspected EPTB cases. 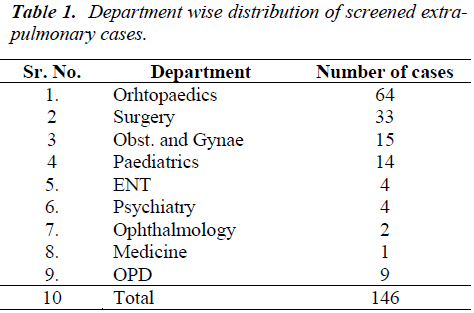 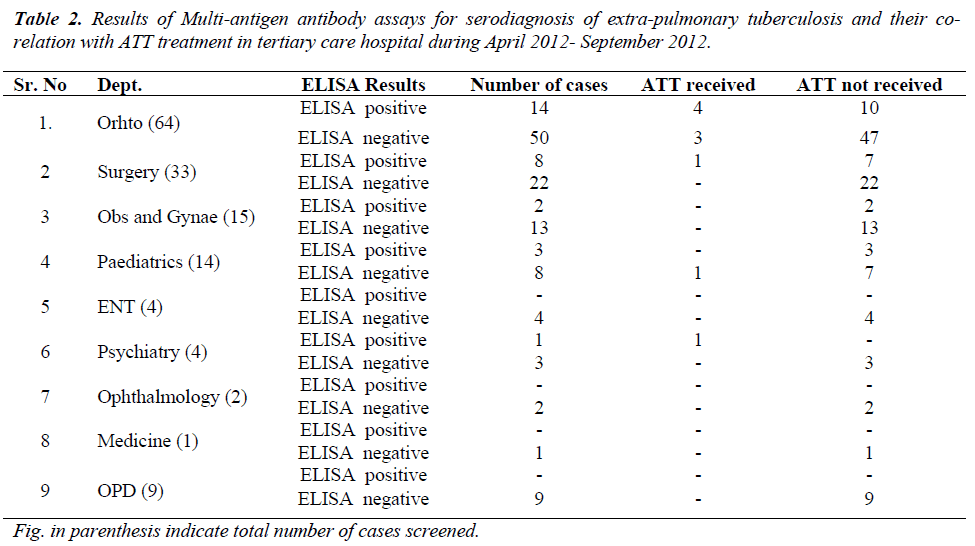 Table 2: Results of Multi-antigen antibody assays for serodiagnosis of extra-pulmonary tuberculosis and their corelation with ATT treatment in tertiary care hospital during April 2012- September 2012.

Thus SEVA TB ELISA showed 96% co-relation with ELISA negativity and absence of ATT. A total of total 108 cases out of 112 (table-3) which were suspected for extra-pulmonary tuberculosis were found to be ELISA negative and did not receive ATT. Thus SEVA TB ELISA helped clinician to rule out suspicion and not to start ATT thus preventing toxic effects of ATT in these suspected clinical cases. Only four ELISA negative out of 112 cases were treated with ATT on strong clinical grounds and other laboratory investigations. Six ELISA positive cases received ATT showing 100% co-relation with ELISA positivity and ATT treatment, and 28 cases did not receive ATT though they were ELISA positive.

Table 3: Summarized data of all department showing ELISA negativity and positivity with its co-relation with ATT

Taking into the account of the reported data [1], to minimize risk from emerging threat of EPTB morbidity and mortality; most effective way out would be early diagnosis and early start of ATT treatment. As there is no gold standard test for confirmation of EPTB infection, clinician has to relay mainly on patients disease history and symptomatology, followed by some laboratory investigations like X-ray, MRI, FNAC, cytological study of aspirated biological fluids. As all these procedures are painful, patients are not ready to undergo such procedures. Moreover results of bacillary culture fluids by BACTEC, MJIT are also questionable due to low bacillary density or wrong specimen collection in inaccessible body parts and are not cost effective. Similar is the case with other investigations like PCR, gamma interferon assays, demanding expertise personnel to carry out besides increased cost. In absence of standard recommended test for diagnosis of EPTB, patients were treated on the basis of clinical symptomatology like weight loss, fever, chronic cough, weakness etc, Clinician also tries short term treatment with higher antibiotics, and if symptoms are not relieved then they go for ATT and such cases were named as response to treatment, on failure of high version antibiotics trial.

Simpler serological tests can be answer for all these problems faced in diagnosis of EPTB in smaller hospitals along with other laboratory investigation and strong clinical suspicion. Serological test is not dependent on site of infection and easy to interpret. Over two decades, Jamanalal Bajaj tropical Disease Research Centre is actively involved in screening of pulmonary cases and extra-pulmonary cases with in house developed SEVA TB ELISA. Earlier studies from our laboratory reported diagnostically important antigens that are ES-31, ES-41, ES-38and ES-43 and detection of their antibodies by penicillinase and more user friendly peroxisdase ELISA [4]. A cocktail of ES 31 and ES-41, ES-38 had shown improved sensitivity when compared with single ES-31 antigen [4]. In house developed SEVA TB ELISA was shown as an important adjunct test in confirming tuberculosis infection of both pulmonary and extra pulmonary cases [3,5]. In this retrospective study we have evaluated usefulness negativity of SEVA TB ELISA in ruling out TB in suspected cases of EPTB and not putting the subject on ATT thus preventing toxic effects of ATT and trauma to the patients.

In present study, ELISA has shown (108 out of 112 ELISA negative) 96% correlation with ELISA negativity and not receiving ATT treatment in suspected subjects of EPTB. ELISA has helped the clinician in a way out from in dilemma, whether a suspected case need to put on ATT or not. Thus SEVA TB ELISA assisted in decreasing active disease case load and also prevented unwanted toxic effects by therapeutic trial in suspected people. SEVA TB ELISA has been helpful as adjunct test for clinicians to rule out tuberculosis and relieving stress for both patients and treating clinicians. However 4 ELISA negative cases, one case was of pediatrics with diagnosis of bilateral pleural effusion and protein energy malnutrition was of tuberculosis Category 1 and treated with ATT. Possible cause of ELISA negativity may be low protein levels, while 3 of orthopedics cases received ATT treatment on ground of clinical history and MRI findings and needed to be followed up for response to treatment.

Data has also shown 100% co-relation with ELISA positivity and ATT treatment, 6 ELISA positive subjects receiving ATT treatment. 28 SEVA TB ELISA subjects which were positive but were not advised ATT and need to be follow up in coming years for development of disease if any. This populace may be having latent tuberculosis infection. It has been documented that almost 5-10% of subjects with latent TB may develop in to active disease in future [6]. Thus SEVA TB ELISA can detect tuberculosis infection well in advance so that one can be monitored for development of disease and also recommended for repeated checkup in future.

Diagnosis of extra-pulmonary tuberculosis is often difficult to establish, especially in resource limited areas, and as patients attending to MGIMS, Sevagram are from rural set up. As signs and symptoms are well in advanced state and the patients insist for prompt treatment. Symptomatology of EPTB is nonspecific and microscopic examination for acid fast bacilli lacks sensitivity, and to obtain samples for histopathology, invasive procedures are more complex and costly [7]. As a result of these difficulties misdiagnosis of EPTB is common in all resource limited countries. Xang [8] reported the misdiagnosis of tuberculosis infection and increasing unnecessary burden on health system. As result of unnecessary treatment in falsely diagnosed cases, leading to more adverse condition of the patients [7]. SEVA TB ELISA can be useful investigation in hand with other clinical investigations not only in diagnosing disease but also in ruling out suspicion of presence of extra pulmonary tuberculous infection.