Purpose: RNA interference (RNAi) of survivin gene can induce cancer apoptosis. In the current study, combined survivin shRNA (small hairpin RNA) and radiotherapy is expected to enhance the efficacy of radiotherapy in human lung cancer in vitro and in vivo.

Methods: The pGenesil2 expression vectors containing survivin shRNAs was used to transfect A549 human lung adenocarcinoma cells and nude mouse grafts, followed by 5 Gy X-rays radiation. The MTT assay was performed to determine cell proliferation. Flow cytometry was used to detect the apoptosis of A549 cells. Tumor volumes were measured. Quantitative real-time PCR and Western blotting were performed to detect both mRNA and protein levels of survivin and caspase-3 in both A549 cells and nude mouse grafts.

Conclusion: Combined survivin shRNA and X-ray radiation can enhance the efficacy of radiotherapy by promoting the apoptosis of lung adenocarcinoma via upregulation of caspase-3 in vitro and in vivo. Combined survivin-targeted genotherapy and radiotherapy may be a potential strategy for treating lung cancer.

Radiotherapy is an alternative method for treatment of lung cancer in clinic. The efficacy of such method is limited due to either low radiosensitivity or radioresistence of cancer cells. Survivin, a member of the Inhibitor of Apoptosis Protein (IAP), is considered as a radioresistence factor [1,2]. Survivin has few expressions in normal mature tissues and is highly expressed in embryonic tissues and mitotic cells [3]. It is also detected in the majority of cancers and resists apoptosis by regulating cancer cell mitosis, where suppressing survivin expression leads to an anti-tumor effect [4].

RNA interference (RNAi) of survivin gene can knockdown the survivin expression to induce cancer apoptosis [5-7]. Survivin siRNA can induce the apoptosis of A549 human lung cancer cells by activating caspase-9 [8]. Use of survivin siRNA can even reverse the cisplatin-resistance of human lung adenocarcinoma in vitro and in vivo; meanwhile, downregulation of Lung Resistance-related Protein (LRP) and bcl-2 as well as upregulation of caspase-3 protein is observed [9].

In recent years, inhibition of survivin gene using siRNA is found to improve the radiosensitivity of human Non-Small Cell Lung Cancer (NSCLC) cells, thus survivin knockdown is a promising strategy for the targeted therapy with an improved radiosensitivity [10]. Inhibition of survivin is an effective way to enhance the radiosensitivity in glioblastoma and laryngeal squamous cell carcinoma and oral squamous cell carcinoma [11-13]. However, more studies are needed to investigate the function of combined survivin RNAi and ionizing irradiation therapy as well as the underlying mechanisms in vitro and in vivo.

The current study constructed the small hairpin RNA (shRNA) of survivin gene into the eukaryotic expression vector pGenesil2, and then treated human lung adenocarcinoma in vitro and nude mouse grafts by combining survivin shRNA with ionizing irradiation therapy. The survivin inhibitory effect of shRNA interference, an improved radiotherapy efficacy and the pro-apoptotic mechanism were investigated. The current study intended to provide experimental evidence for a new way to improve the effects of radiotherapy by combining with survivin shRNA interference in lung cancer.

The hairpin shRNA of survivin was designed. Briefly, according to the cDNA sequences of survivin in the NCBI GenBank (NM_001168), a 19-nt sequence was designed: GAAGCGTCTGGCAGATACT, followed by BLAST to confirm the specific sequence homology. Afterwards, two single-strand 69-nt oligonucleotides to construct the hairpin shRNAs were synthesized by Sangon Bio. Inc. (Shanghai, China). The hairpin shRNAs were constructed as follows: BamHI+Sense sequence+Loop (9 nt+Antisense sequence +TTTTTT (terminator)+KpnI+HindIII; the forward sequence was 5'-GATCCGAAGCGTCTGGCAGATACT TTCAAGAGA AGTATCTGCCAGACGCTTC TTTTTTGGTACCGGAAA-3', and the reverse sequence was 5'-AGCTTTTCCGGTACCAAAAAA GAAGCGTCTGGCAGATACT TCTCTTGAA AGTATCTGCCAGACGCTTC G-3'. The BamH I and Hind III restriction sites were used for the ligation with the plasmid pGenesil2. The Kpn I site that pGenesil2 did not carry was added for identifying the success of constructs. The forward sequence and reverse sequence annealed to form a double strand, which was ligated with the linearized plasmid pGenesil2 by restriction sites BamH I and Hind III using the T4 DNA Ligase, forming the expression vector pGenesil2- Survivin shRNA. The pGenesil2-Survivin shRNA was transformed into E. coli DH5α, followed by sequencing (Sangon Bio. Inc. Shanghai, China). The sequences were certified to be the same as they were expected. Scrambled shRNA control is synthesized in Sangon Bio. Inc. (Shanghai, China).

A549 cells were seeded into 24-well culture plates (Corning Costar, Lowell, MA) at a density of 1 × 105 cells per well, 0.5 ml in each well. Cells were tested in five separate groups: normal control with no treatment, scrambled shRNA control, pGenesil2-survivin shRNA (survivin shRNA group), 5 Gy Xrays radiation (5 Gy group) and combined pGenesil2-survivin shRNA+5Gy X-rays radiation (Combined group), 4 wells for each group. When cells grew to 80% confluence, transfection was performed using LipofectamineTM 2000 according to the instructions, 10 μg of plasmids were used and the ratio between plasmid and liposome was 1: 2.5. High-glucose DMEM containing 10% FBS was refreshed 6 h after transfection, and then cells were cultured for 24 h. X-rays irradiation was administrated using the Philips X-ray Deep Therapy machine at 200 kV and 10 mA, using 0.5 mm Cu and 1 mm Al plates at 50 cm skin distance. A dose of 5 Gy was delivered at a rate of 0.287 Gy/min. The selection of dose and dose rate followed the report from the United Nation Scientific Committee on the Effects of Atomic Radiation (UNSCAR) in 1986 [14,15]. Cells were cultured for 24 h. Then cells were tested by the MTT assay and flow cytometry (BD FACSCalibur, Becton Dickinson Co., Franklin Lakes, NJ).

A549 cell grafting in nude mouse and treatment

Nude mice underwent aseptic injection with 0.2 ml of A549 cells at a concentration of 5 × 107/ml into the armpit. When tumors grew to 5-8 mm diameter, the day was defined as 0 d for the following experiment. Mice were divided into four separate groups: scrambled shRNA control, pGenesil2- Survivin shRNA (Survivin shRNA group), 5 Gy X-rays radiation (5 Gy group) and combined pGenesil2-Survivin shRNA+5Gy X-rays radiation (Combined group), 5 mice in each group. In as aseptic isolator, each nude mouse underwent in situ injection with 40 μg of expression vectors, which were coated with 100 μl of DMEM and 10 μl of liposome 20 min prior to injection. After 24 h, nude mice were anesthetized. The tumor parts were exposed to 5 Gy X-rays radiation. The irradiation condition was described above. The tumor sizes of Length (L) and Width (W) were measured with a Vernier calliper at the predetermined day, and the tumor volume (mm3) was calculated according to the formula L × W2/2. At the 18th day, mice were sacrificed, the tumor masses were removed by surgery and stored for the detection of mRNA and protein.

A549 cells and 0.1 g of nude mouse tumor masses were added to 500 μl of lysis buffer (10 mmol/L Tris HCl, pH 7.4; 1 mmol/L EDTA, pH 8.0; 0.1 mol/L NaCl; 1 μg/ml aprotinin; 100 μg/ml phenylmethanesulfonyl fluoride) to extract the total protein. The Coomassie Blue method was performed to quantify the total protein. Proteins were separated on 12% gel using the SDS PAGE with a loading of 50 μg per lane. Proteins were electroblot to a nitrocellulose membrane (Bio Rad, Hercules, CA). The membrane was blocked using 1X TBST buffer containing 5% non-fat milk overnight at 4ºC. The primary monoclonal antibodies against either survivin, caspase-3 or β-actin were added, and incubated at room temperature for 1 h, respectively. The membranes were washed three times by 1X TBST buffer, 10 min for each time. The horseradish peroxidase conjugated secondary antibodies were added at 37˚C for 1 h. After washed, the Enhanced Chemical Luminescence (ECL) method was used to visualize the blots. The X-Ray film was exposed and the pictures were photographed using a gel image processing system (UVP EC3 600 Imaging System, UVP LLC, Upland, CA). The protein levels were presented as the relative interest protein/β-actin grayscale ratio, which was analysed using the software Image- Pro® Plus. Version 6.0. (Media Cybernetics, Inc., Silver Spring, MD). 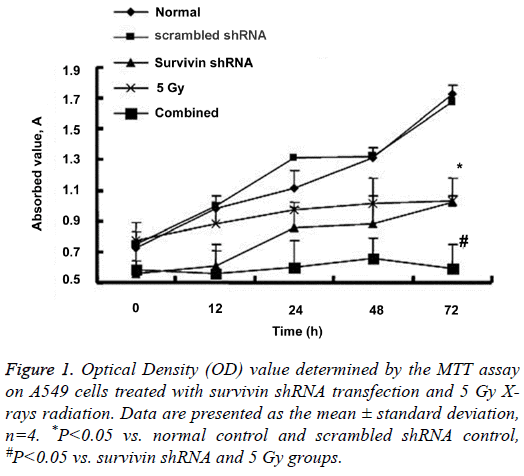 Figure 2 and Table 1 show the results of tumor growth. The tumors in all groups were enlarged in a time-dependent manner. The tumors in the scrambled shRNA control grew up to about 50-fold at 18 days versus those at 0 day. By comparison, each therapeutic treatment lowered the tumor growth markedly, and the order for the effects of lowering tumor growth was: the combined>Survivin shRNA>5 Gy>scrambled shRNA control, and the differences were statistically significant at the time points of 6, 12 and 18 days (P<0.05 or P<0.001). In particular, the tumor volume at 18 days in the combined group was only about 5.7-fold versus that at 0 day. Use of Survivin shRNA enhanced the effects of radiotherapy on lowering tumor growth. 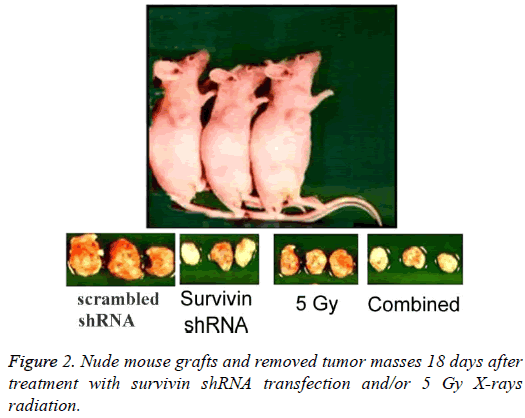 Figure 3 shows the results of A549 cell apoptosis detected by flow cytometry with the PI/AnnexinV-FITC double staining. The order for the apoptotic percentage in each group was: the combined>Survivin shRNA>5 Gy>scrambled shRNA control=normal control and the differences were statistically significant (P<0.05 or P<0.01). Particularly, the apoptotic percentage in the combined group (19.12 ± 3.48%) was about 3-fold versus the scrambled shRNA control (6.77 ± 1.04%). 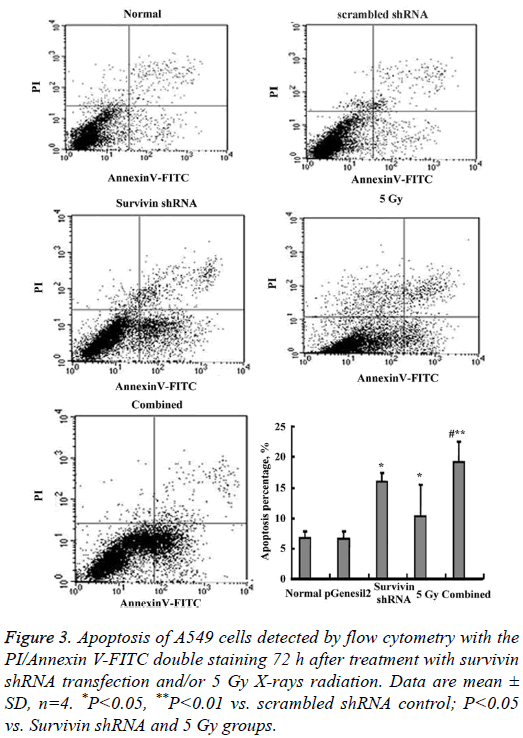 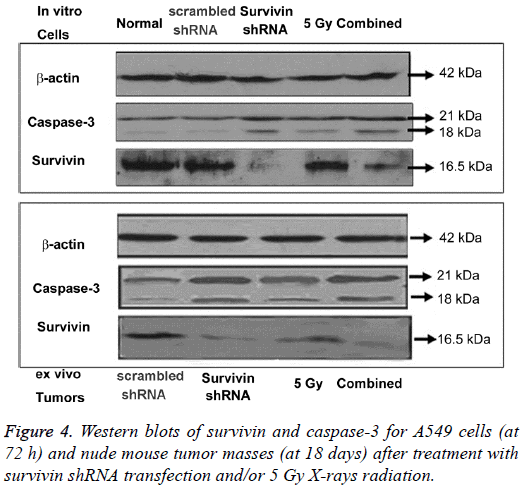 Figure 4: Western blots of survivin and caspase-3 for A549 cells (at 72 h) and nude mouse tumor masses (at 18 days) after treatment with survivin shRNA transfection and/or 5 Gy X-rays radiation. 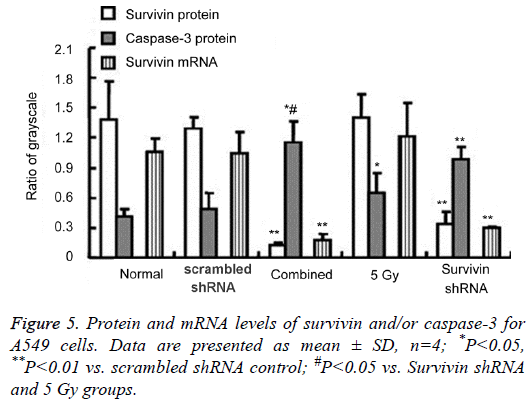 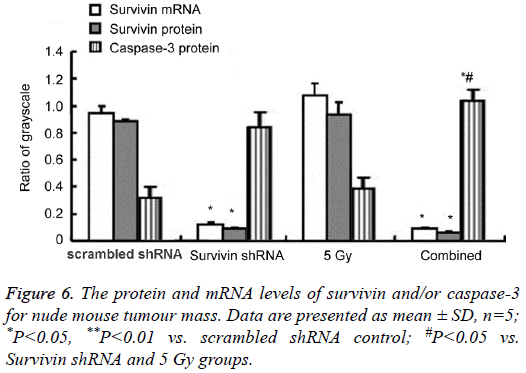 Tumor mass is a hypoxic focus, resulting in a therapy resistance. How to enhance the radiosensitivity of tumor mass is the interest of research. Survivin plays a role in promoting cell proliferation [16,17] and is highly expressed in tumor mass. Its inhibitor to knockdown the survivin is sufficient to induce the apoptosis of tumor cells [6,7]. Thus, survivin has become a hotspot target for anticancer therapy [18-24].

To find the molecular evidence upon the ability to induce apoptosis and inhibit proliferation, we detected survivin and caspase-3. The 5 Gy X-rays alone led to an increased level of survivin in vitro and in vivo. This is consistent with the previous results [19]. The reason for this may be that the cells or tumor mass trigger the radioresistant signaling pathways long time after irradiation to increase the expression of survivin that repairs the radiation damage and promotes cancer survival. The Survivin shRNA alone and the combined therapy were observed to reduce the survivin gene expression in both cells and tumor masses. The use of survivin shRNA contributes to such effects because the survivin shRNA expression can act for a long term in cells or tumor masses. These results suggest that the ability of survivin to inhibit apoptosis and promote cell proliferation can be knockdown by survivin-targeted RNA interference, in particular for the combined therapy [11,12].

Survivin can directly inhibit the activity of caspase-3 the apoptosis effector and thus the blocking of survivin gene by a targeting inhibitor can induce cancer cell apoptosis [20-24]. In the current study, the expression levels of caspase-3 increased in both the 5 Gy, survivin shRNA and combined groups, in particular the combined therapy. This finding can exactly explain the apoptosis results of A549 cells detected by flow cytometry. Upregulation of caspase-3 resulting from use of survivin siRNA is involved in the reversion of cisplatinresistance of human lung adenocarcinoma [9]. In addition, survivin siRNA activates caspase-9 that induces the apoptosis of A549 human lung cancer cells [8]. Considering the cascade of caspases, the findings in the current study are consistent with these previous reports.

In conclusion, survivin-targeted shRNA can knockdown effectively the survivin gene in A549 human lung adenocarcinoma cell lines and the nude mouse grafts. Combined genotherapy and radiotherapy can enhance the anticancer effect of 5 Gy X-rays by inducing cancer cell apoptosis via activation of caspase-3. Combined survivintargeted genotherapy and radiotherapy is potential to become one of the effective methods for the treatment of lung cancer.