The aim of this study was to observe the impact of a Lumbosacral Plexus Block (LPB) on sex hormones in female rabbits, in order to elucidate LPB-induced menstrual changes. The blood of selected adult female rabbits was sampled for Estrogen (E), Progesterone (P), Human Chorionic Gonadotropin (HCG), Gonadotropin Releasing Hormone (GnRH), Follicle Stimulating Hormone (FSH), and Luteinizing Hormone (LH), before and after estrus, in order to comprehend the hormonal changes. The level of E in the treatment group was significantly higher than the control group (P<0.05) before and during estrus, but not after estrus (P>0.05). There was no change in the level of P, HCG, GnRH, FSH, and LH between the groups, at any point in the estrous cycle. Thus, LPB increased E before and during estrus, but had no effect on estrogen after estrus. Although LPB also increased the menstrual blood volume, it did not change the menstrual cycle.

The Lumbosacral Plexus Block (LPB) shows good efficacy for treating chronic lumbar and lower limb pain disorders [1-11]. However, owing to the anatomical characteristics of the lumbosacral plexus, women of reproductive age show increased menstrual quantity and/or menstruation prolongation, after LPB; some patients even need curettage to stop bleeding in clinics. The causes of bleeding by vascular dilation and uterine endometrial delayed healing are still unclear, but may be related to female hormone levels. Although this is common in clinics, no reports have been published on the subject. Thus, we used estrous female rabbits, which show menstrual cyclical changes of the vulva similar to those of humans, to investigate the effect of LPB on female hormone levels.

A total of 12 adult New Zealand female rabbits with fixed estrous cycle, weighing 3.5-4.0 kg, were selected and randomly divided into the treatment group (T) and the control group (C; n=6 in each). The LPB was performed on Group T. This study was carried out in strict accordance with the recommendations in the Guide for the Care and Use of Laboratory Animals of the National Institutes of Health. The animal use protocol has beens reviewed and approved by the Institutional Animal Care and Use Committee (IACUC) of Guizhou Orthopedics Hospital.

Treatment of the animals

Pre-experiment: The right waist fur of three rabbits were shaved, before they were placed in the left lying position; the needling site was positioned 1.5 cm laterally away from the right side of the spinous process of spine-iliac connection, and then one needle was used to puncture 2-2.5 cm, so as to break through the intertransverse ligament and enter the intergroove of right greater psoas muscle. Radiography was used to confirm the position accuracy and 1 ml of iohexol was injected. Then computed tomography was performed to check the distribution of the contrast agent within the intergroove of right greater psoas muscle, and the depth was recorded. The remaining three rabbits were then selected and underwent positioning using the same method, using the average depth obtained in the first time experiment, during which the sense of breaking through should also be reviewed. Thereafter, 2.5 ml and 5.0 ml of Methylthioninium Chloride (MC) were injected, in the first set of three rabbits and set of three rabbits, respectively. The rabbits were then euthanized using propofol and dissected to observe the location and distribution of MC. The confirmed distribution of MC within the intergroove of right greater psoas muscle, enabled the visualization of the distribution of LPB, and allowed for the consistency of the two positioning methods to be confirmed.

Treatment methods: Each rabbit was placed on its lateral side with the treatment side upward. The limbs and head had been treated by a pain specialist for 2 weeks. Each rabbit was shaved and the lumbosacral area was disinfected. Further, one No 6.5 needle (3.5 cm in length) was used to puncture through the skin, subcutaneous tissue, erector spinae, lumbar 5-6 transverse ligament, and lumbar quadrate muscle, until it finally penetrated the intergroove of greater psoas muscle. Thereafter, 2.5 ml of the above formulation liquid was then administered as a bolus. The injection started from the end of estrus, and was administered once a day, to the left and right side alternatively, until the next early estrus. No treatment was performed during estrus, and each rabbit was injected 8 times on average (range: 5-10 injections).

SPSS17 was used for statistical analysis, and data were expressed as mean ± standard deviation. Student’s t-tests were used for intergroup comparison and statistical significance was set to P<0.05.

Changes in the levels of female hormones

A human hormone test kit was used to evaluate the hormone level of the female rabbits. Changes in the level of female hormones following the LPB are shown in Tables 1 and 2. The level of E in the treatment group was significantly higher than that in the control group before and during estrus (P<0.05), but not after estrus (P>0.05). There was no change in the estrous cycle.

In comparison to the control group, the level of GnRH was significantly lower than during estrus (P<0.05), but significantly higher before and after estrus (P>0.05).

The levels of P, HCG, FSH, and LH were all within the normal range, and there were no significant difference in their levels between group T and group C.

The uterine tissue in group C was normal, with clear intimal and muscular layers and structures (Figure 1A), while the mucous membrane was mildly thickened. The number of glands was also mildly increased. Glandular morphology and distribution were normal. Stromal cells exhibited normal size, shape, and number. No degeneration, necrosis, inflammatory cell infiltration, fibrosis, or other lesions were observed (Figures 1B and 1C). 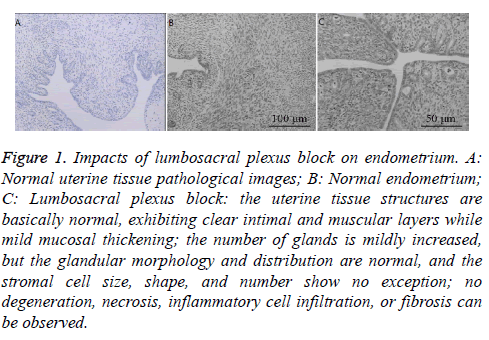 Figure 1: Impacts of lumbosacral plexus block on endometrium. A: Normal uterine tissue pathological images; B: Normal endometrium; C: Lumbosacral plexus block: the uterine tissue structures are basically normal, exhibiting clear intimal and muscular layers while mild mucosal thickening; the number of glands is mildly increased, but the glandular morphology and distribution are normal, and the stromal cell size, shape, and number show no exception; no degeneration, necrosis, inflammatory cell infiltration, or fibrosis can be observed.

Although ovarian tissue was normal in group C (Figure 2A), the follicular development and differentiation were poor in group T. Further, the generation of ovarian follicles was moderately decreased and follicular atresia was mildly increased. LH was still normal, with no abnormality of follicular development and differentiation, degeneration, necrosis, inflammatory cell infiltration, fibrosis, or other lesions in group T (Figures 2B and 2C). 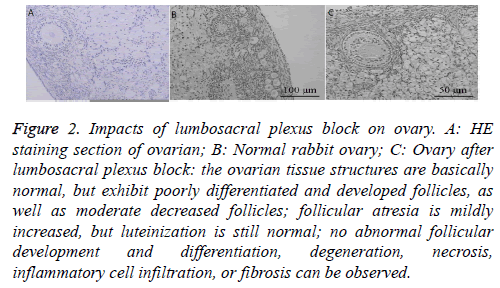 Figure 2: Impacts of lumbosacral plexus block on ovary. A: HE staining section of ovarian; B: Normal rabbit ovary; C: Ovary after lumbosacral plexus block: the ovarian tissue structures are basically normal, but exhibit poorly differentiated and developed follicles, as well as moderate decreased follicles; follicular atresia is mildly increased, but luteinization is still normal; no abnormal follicular development and differentiation, degeneration, necrosis, inflammatory cell infiltration, or fibrosis can be observed.

LPB is one of the methods used to treat chronic pain in the lumbar region and lower extremities [1-5,11-13]. However, LPB often leads to a prolonged menstrual period and increased menstrual volume in women of reproductive age. Thus, LPB is often interrupted, with some patients even needing curettage to stop excessive bleeding, which could result in a mental burden due to recurrent chronic pain [14]. We conducted this study to elucidate the cause of excessive bleeding, in order to reduce this mental burden on patients with chronic pain who want to undergo LPB.

LPB did not significantly increase or decrease FSH and LH in female rabbits, suggesting that it had no effect on hormone secretion. However, the level of E significantly increased before and after estrus after the LPB was performed. Furthermore, GnRH, which is inhibited by elevated E, reflectively reduced during this period, when compared with the control group. E plays an important role in the menstrual cycle, regulating the hypothalamus and pituitary feedback loop and secretion of GnRH, and promoting follicular development in association with FSH. Elevated levels of E can induce hyperplasia of endometrial glands and stroma, thicken the intimal membrane, and increase menstrual flow [15-18]. The inner genitalia is mainly dominated by sympathetic and parasympathetic nerves [19,20], among which the sympathetic nerve separates front the anterior abdominal aortic plexus, and is composed of the II-IV sacral parasympathetic nerves. In the pre-experiment, the contract agent reached the lesser femoral trochanter from the lumbosacral region along the greater psoas muscle, suggesting that the LPB inhibited the II-IV sacral parasympathetic nerves. Thus, the sympathetic nerves will be relatively active, resulting in the suppression of the reproductive system, which led to the increase in E, but no change in the level of P. The pathological results demonstrated poor follicular development and differentiation with a moderate decrease in follicles and mild increase in follicular atresia. This also confirmed that the reproductive function was inhibited. The pathological results also showed that LH was normal. Hence, LPB had no impact on the generation of ovarian LH, which is also why the level of E was not obviously increased after estrus.

A few limitation of this study must be noted. This study involved animals and had a small sample size. Further, the estrus of female rabbit is not the same as the menstrual cycle in humans. Moreover, the relation between the blood volume of the menstrual cycle with the level of hormones still needs further study.

LPB increased E before and during estrus, and induced poor follicular development and differentiation, moderate reduction of ovarian follicle, and mild increase of follicular atresia. However, it had no effect on E after estrus or on the menstrual cycle as a whole. LPB-induced increases in the level of E could cause changes to menstrual flow. However, the reason for menstrual change following LPB still required further study.

This study was supported by the Guizhou Provincial Science and Technology Department (No: Qiankehe LS (2012) 052).