Impact of sewage on physico-chemical water quality of Tawi River in Jammu city.

Pure water is on of the priceless, indispensable and primary drivers of public health. Drinking water quality is an issue of concern for human health in developing as well as in developed countries all over the world. Quality supply of drinking water to the public is very essential for health and welfare, whereas, deteriorated water quality poses a key risk to health and human well-being. Despite massive outlays for drinking water and sanitation in India, access to safe drinking water remains a challenge. Modernization has led to production of wastes which corrode our environment, and as the day go on development increases and leads to addition of more and more harmful products in our environment. Our water bodies suffer most, large amount of sewage water (waste-water) is being released from towns, urban and rural areas. River Tawi being one of the important river in Jammu and Kashmir has been degraded in recent years which has serious impact on the water availability especially in Jammu city. Water samples were analysed for various physical and chemical parameters. It was found that the various input sights of sewage that enters into River Tawi badly effect the quality of water and make it unfit for domestic use. The overall study shows that sewage intrusion from Gujar Nagar to Prem Nagar affects the quality of the river water and raises values of certain parameters like pH, DO, EC, temperature, etc.

Drinking water, in adequate quantity and safe quality, is a vital requirement for life and a determinant of standard of living. Poor or no access to safe water supply can result in many diseases including diarrhea1, fluorosis, cholera, hepatitis. These diseases potentially constrain human resource development and productivity, especially of the poor. The National Water Policy 2002 reflects the significance attached to drinking water by stating, “adequate safe drinking water facilities should be provided to the entire population both in urban and rural areas. Irrigation and multipurpose projects should invariably include a drinking water component, wherever there is no alternative source of drinking water. Drinking water needs of human beings and animals should be the first charge on any available water”. However, around 22 per cent of households in India lack access to safe drinking water sources, like tap, hand pump and tube well (Census 2001). Hence, significant efforts are being made by the central and state governments for increasing the coverage of households with adequate and safe drinking water supply, along with sanitation services, which coincide with the Millennium Development Goals (UNDP 2003). Prevention of river pollution requires monitoring of physico-chemical parameters. So, physico-chemical parameters were taken for analysis of water quality of river Tawi.

Water samples from the sites were collected and taken to lab for physico-chemical analysis. Dissolved oxygen, ph, and water temperature was done on site. The methods were followed as per standards laid by APHA [1].

Tawi river originates from the lapse of Kali Kundi glacier and adjoining area southwest of Bhadarwah in Doda District. Its catchment is delineated by latitude 32°35'-33°5'N and longitude 74°35'-75°45'E (Table 1). The catchment area of the river up to Indian border (Jammu) is 2168 km² and falls in the districts of Jammu, Udhampur and a small part of Doda. Elevation in the catchment varies between 400 and 4000 m (Figure 1).

Table 1: Geographicalcoordinates of the sites. 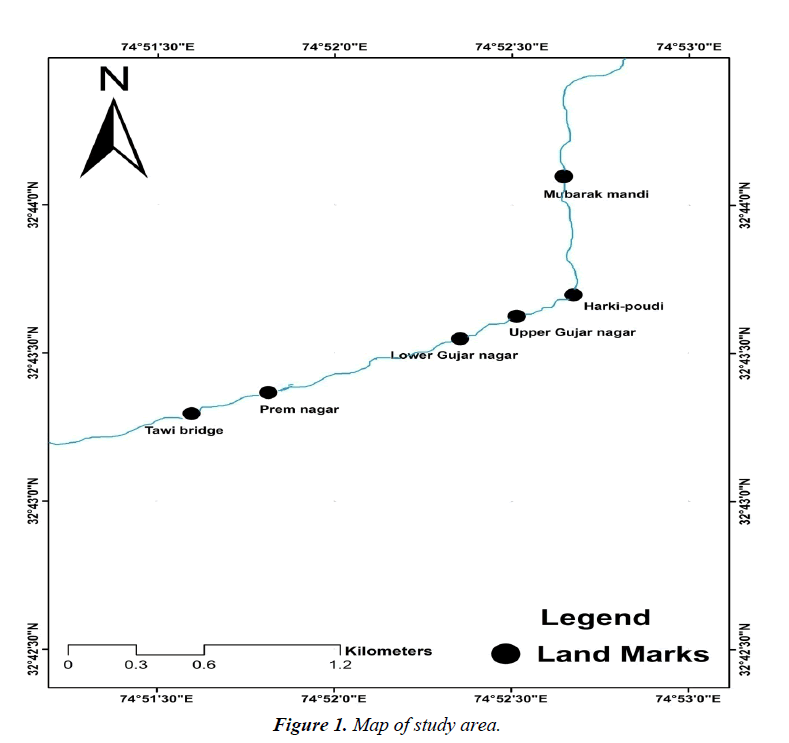 In the present study water samples were collected from the various stations of river Tawi for analysing the physicochemical analysis of water and to study the impact of waste water on the quality of water.

Temperature of water is basically important because it effects bio-chemical reactions in aquatic organisms. The average temperature of the water in the present study ranged from 18 to 21oC and that of air range from 24-26oC (Figures 2 and 3). 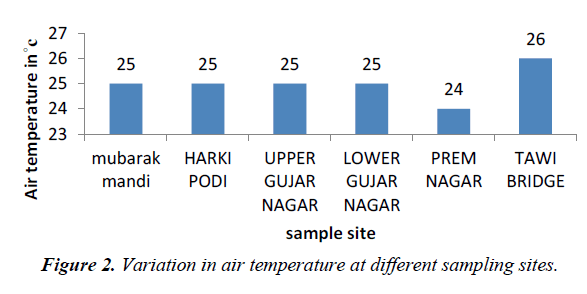 Electrical conductivity is a measure of water capability to transmit electric current and also it is a tool to assess the purity of water. Its value depends on the concentration and degree of dissociation of the ions as well as the temperature and migration velocity of the ions in the electric field. Thus, as concentration of dissolved salts increases conductivity also increases. It depends upon the presence of ions, their total concentration, mobility, valence and temperature. EC of our water sample range from 272.1- 434.1 ms-1 (Figure 4).

TDS originate from dissolution or weathering of the rocks and soil, including dissolution of lime, gypsum and other slowly dissolved soil minerals. Dissolved mineral gases and organic constituents may produce aesthetically displeasing color, taste and odour (Figure 5). According to WHO and Indian standard, T.D.S. value should be less than 500 mg/L for drinking water which can be extended up to 1500 mg/l in case of non-availability of any other alternate source, and value of TDS in our water sample range from 151.8-245.8 mg/l. TDS concentration in water vary considerably in different geological regions owing to differences in solubility in minerals (WHO, 2006).

Turbidity is the cloudiness of a fluid caused by individual particles that are generally invisible to the naked eyes. The measurement of turbidity is key test of water quality. Turbidity measures of light on the suspended particles in waters using nephlometric turbidity unit (NTU) and 5 NTU is usually acceptable for drinking (WHO, 2006). In surface waters, the turbidity depends on the type of steam bed, velocity of waters, channel depth, type of bank and shape of channel [2]. In the present study the turbidity value ranges between 72-95 (Figure 6).

Figure 6: Variation in turbidity of water at different sampling sites.

Dissolved oxygen is an important water quality parameter in assessing water pollution. Oxygen is fixed in water either due to the direct dissolution from the atmosphere or a result of primary production (Figure 7). Dissolved oxygen of our water samples ranges between 3.2-9.0. 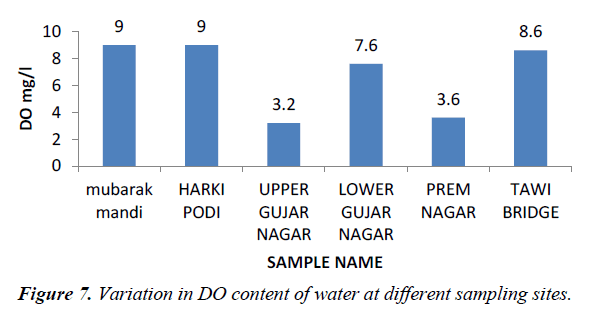 Figure 7: Variation in DO content of water at different sampling sites.

Hardness is an important parameter in decreasing the toxic effect of poisonous element. The hardness of our water samples was found to be in the range of 135-215 mg/l (Figures 8 and 9). The acceptable limit of total hardness (as CaCO32-) is 200 mg/l (as CaCO32-) which can be extended UPTO 600 mg/l (as CaCO32-). 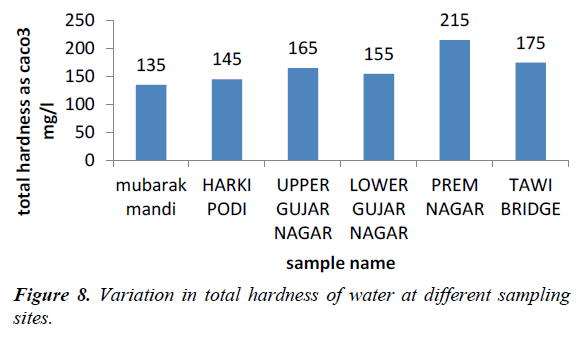 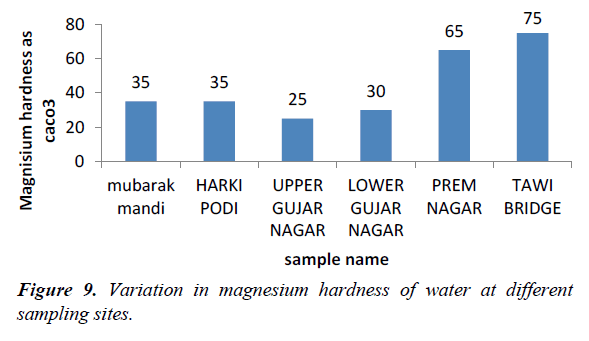 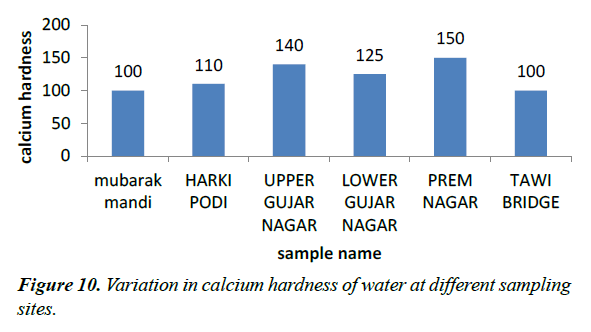 Alkalinity is a measure of the ability of water to neutralize acid. The constituent of alkalinity in natural system include mainly CO3 2-, HCO-3 , and OH? and other constituent which may contribute to alkalinity are H2BO 2-, HPO4 2- and HS?. These compounds result from dissolution of mineral substances in the soil and atmosphere. The acceptable limit for alkalinity (as CaCO3 2-) is 200mg/l and in absence of alternate source, the alkalinity value up to 600 mg/l is acceptable (Figure 11). Total alkalinity of our water samples range from 32.5-105 mg/l.

In the present study CO3 2- and HCO3- are discussed with total alkalinity because they are the main component of alkalinity. Carbonate is absent in all the samples we collected and analysed, so alkalinity of our water samples is only because of bicarbonate.

Nitrate concentration is responsible for several diseases as hypertension, cancer and birth defect. Presence of nitrate in concentration is greater than (5 ppm), reflecting unsanitary conditions in surface waters range between (0-18 ppm) and not exceed (5 ppm) in unpolluted waters (Figures 12 and 13). In the present study water samples from different sampling stations showed nitrate concentration between 0 and 0.35 mg/l. These are the permissible level as per the drinking water standard. 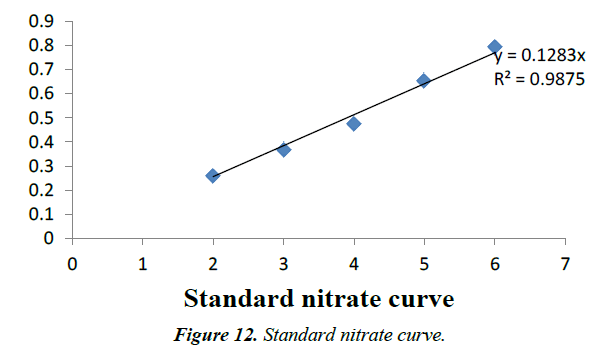 Sulphate ion does not affect the taste of water, if present in low concentrations. It is naturally occurring anion found among all kinds of water bodies. It may undergo transformation to sulphur and then sulphur oxide depending upon the redox potential of water. Sulphate cannot readily be removed from drinking water, except by expensive process such as distillation, reverse osmosis or electrodialysis. The sulphate ion concentration in the present investigation varied from 10-44.33 mg/l which indicates that sulphate level in the upper gujar nagar area is above concentration recommended but WHO 2006 for the surface waters, also the concentration level on other sites of study are in the permissible level (Figures 14 and 15). 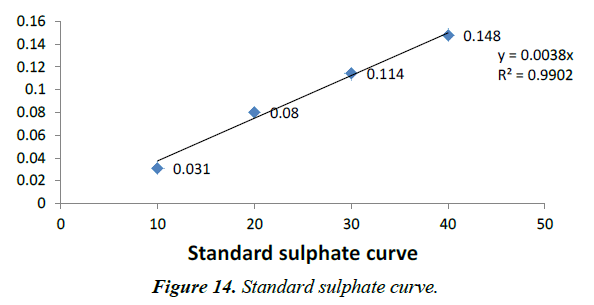 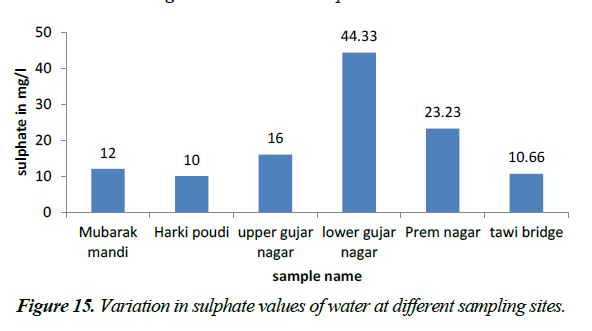 Sewage generated from various sources that has impact on the water quality of river Tawi. The sewage input is mainly from upper gujar nagar to prem nagar but there is high input of sewage in the gujar nagar area.

Water temperature was low at Mubarak mandi and high near prem nagar because of input of sewage from various sources. The high temperature recorded from water samples may result from discharge of sewage water directly from outlet points.

Hydrogen ion concentration (pH) is used as an indicator for acidity in water. pH values recorded from water samples shows that pH of water was slightly acidic at all sites while as pH was neutral at Tawi bridge. It was also recorded that input of sewage has impact on the pH of the water.

Alkalinity of water is due to the presence of bicarbonates of calcium and magnesium [9]. The higher alkalinity values of sewage water samples at site V may be due to high concentrations of bicarbonates and non-carbonates including hydroxides, silicate, borate and organic ligands [10].

Hardness of water is equivalent to concentration of total inorganic salts which are able to precipitate when it is heated and it negatively affects the solubility of soaps in water [11] high values of total hardness in water was at site V which is caused by dissolved calcium, to lesser extent by magnesium, which is as equivalent quantity of carbonates (WHO, 2006).

Nitrate is highly oxidized form of nitrogen compound and is commonly present in surface and ground waters. Since it is final product of aerobic decomposition of organic nitrogenous matter [9]. Unpolluted natural waters usually contain only minute amount of nitrate. In surface waters, nitrate is a nutrient taken up by plants and assimilated into cell protein. Nitrate concentration in surface and ground waters is usually low but can reach high levels as a result of leeching or runoff from the agricultural fields or contamination from human or animal wastes as a consequence of the oxidation of ammonia and similar sources (WHO, 2006). Nitrate concentration is responsible for several diseases as hypertension, cancer and birth defect. Presence of nitrate in concentration is greater than (5 ppm), reflecting unsanitary conditions [12]. In surface waters range between (0-18 ppm) and not exceed (5 ppm) in unpolluted waters [13]. Nitrate concentration of the sampling sites is within the permissible limit. Sulphate is an abundant ion in the earth’s crust and its concentration in water can range from few milligrams to thousand milligrams per litre [9].

Sulphate occurs naturally in minerals and are used commercially and principally in the chemical industry. They are discharged into water in industrial wastes and through atmospheric deposition; however the highest level usually occur in ground waters (WHO, 2006). Concentration of sulphate in waters range from (3.7 ppm) in surface waters to (30 ppm). The sulphate ion concentration in the present investigation varied from 10-44.33 mg/l which indicates that sulphate level in the upper gujar nagar area is above concentration recommended but WHO 2006 for the surface waters, also the concentration level on other sites of study are in the permissible levels [14,15].

Hydrogen concentration of water is slightly acidic at almost all sites. Water samples showed high Electrical Conductivity values, which indicate high salinity at all sites. Alkalinity in the sewage water was within standard and permissible limits. Concentration of Calcium and Magnesium do not exceed the recommended and standard values. Low dissolved oxygen concentration was recorded in sewage water samples, as a result of organic matter at most of the sites. The most effected site in our study area is prem nagar area the reason for that is input of high level of sewage from hotels residential areas. Raised values of certain parameters like ph, DO, EC indicate that pollution intrusion to river Tawi. The overall study of the river Tawi shows that the sewage intrusion from gujar najar area and the prem nagar area effects the quality of water of river Tawi. To protect this water ecosystem, there should be proper management and planning of deposition of municipal sewage and domestic sewage for health, hygiene and sustainable environment.