Impact of prenatal stress and adulthood stress on immune system: A review

Prenatal stress is reported to increase the risk of nervous, endocrine and metabolism diseases, immune dysfunction. The influence of prenatal stress on immune system is complicated, which include the changes of immune cells, cytokines, immune organs, hematopoietic stem cells. The mechanism accepted is that prenatal stress cause secretion changes of stress hormones like adrenaline and glucocorticoids which lead to cascade response of systematic modifications. This paper reviews the influence of main long-last hormone, glucocorticoids on immune systems, and further discover the alteration of the central immune organs, the bone marrow and thymus, which is one of the reason that prenatal stress cause prolonged influence in immune function of offspring. As the inner environment of prenatal offspring owns many specific aspects compared with the adults, the affects of prenatal stress are different from adult stress. However, parts of the body response are similar. So it may be helpful to further study of prenatal stress by comparing these two.

Prenatal stress can cause modifications in immune system of offspring. At present, various stress factors are studied, including social, environmental factors and so on [1]. Because of the existence of complicated factors, experimental results are varied.

The comparison between prenatal stress and stress in adulthood show great similarity. It may suggest there may be an analogous mechanism in prenatal stressed offspring and can provide more research directions for further study and preventative health interference before the birth of fetus [2]. It is proved that long-term stress suppresses immune function, including reduce proliferation of lymphocytes and diminish body resistance against tumors or infection [3].

Stress in adulthood can cause increase of monocytes, neutrophils and B cells in spleen and redistribution of myeloid cells and lymphoid cells while decrease total number of T cells and B cells. These were referred to reduction of thymic lymphocytes exported and impaired function of immune organs including thymus, spleen and lymph nodes [4], but increase the myeloid cells for compensation. In experiments of chronic GCs stress, increased neutrophils was found in the blood with delayed apoptosis [5] while apoptosis of thymocytes increased, including thymus atrophy that lead to suppression of cellular immune and decrease of spleen nucleated cells. The thymus is sensitive to stress which can decrease lymphocytes by suppressing the process of maturation [6,7]. Glucocorticoids can break normal balance in T cells by shifting towards Th1 predominance which contributes to higher risk of autoimmune disease.

For the lymphocytes, proliferation capability to mitogen varies in different conditions [9-11], while lymphocyte cells were mostly reported deceased. Although both CD4+ and CD8+ cells decreased due to prenatal stress, the ration of CD4+/CD8+ is elevated [12]. As offspring grows up, the T cell subsets that depends on the output from thymus is decreased [13-15]. This transformation may increase the risk of immune incompetence state, tumors and various diseases.

For humoral immune function, gestational stress was proved to lead to low level of immunoglobulin in offspring [16,17] while elevate sensitizing immunoglobulin E which is considered as a marker for the early occurrence of atopic disease in children [18]. When confronting immune challenges, prenatal stressed offspring presented incomplete recovery pattern of slow speed [19].

However, the impact on humoral immune function is less important for the immune dysfunction in offspring compared with cellular immune. It may mean the thymus or bone marrow is affected heavier than lymphonodes and spleen where is main production of B cells.

In adulthood, chronic stress can cause elevation of serum anti-dsDNA IgG2a and IFN-γ while decrease the production of IL-4 and IL-10, which may increase the risk of autoimmune diseases by breaking the balance of Th1/Th2. These alterations may be due to the increase of serum corticosteroids [20,21]. Some exposure factor like transportation stress can alter both serum concentration by effect on expression of IL-2, IL-6 and IL-10, and the receptors in thymus of these cytokines [22].

Glucocorticoids are generated during prolonged stress. For immature immune system of intrauterine fetus, elevated glucocorticoids can reduce its ability of selfprotection, especially cellular immune[23,24]. Glucocorticoids can influence the process of maturation and growth of leukocyte, and down regulates cytokines include IFN-γ, TGF-β, TNF-α, IL-12 by Th1 cells which modulate cell immune responses [25], while up regulates expression of IL-4,10,13 secreted by Th2 cells which modulate humoral immune responses. Glucocorticoids can also suppress the growth of splenic immune cells and reduce the percentage of CD8+ cells by inhibiting generation of IL-2 [26].

Prenatal stress is suspected to raise risk of allergic diseases in offspring later in life through the elevated Th1 proinflammatory cytokines in the interface of fetalmaternal barrier [27,28]. As the pro-inflammatory cytokines increase in stressed pregnant women [29,30], a modulating response can be aroused and the elevation concentration of cytokines may inhibit the production of the corresponding cytokines in the fetus[31,32]. As a result, the production of IFN-γ and IL-6 which will be increase in adult stress is in a low level at birth, while other cytokines like IL-1β and IFN-γ increase significantly, which are important for immune imprinting offspring.

Moreover, IL-2 was found to be in low expression and IL-5 was increased in prenatal stressed offspring [33].

Influence on bone marrow and thymus

Long term stress in adulthood can reduce the amount of bone marrow lymphoid cells markedly, among which precursor subsets of both T and B cells decrease parallelly [34,35]. Therefore, the output of pre-T-cells from bone marrow decreases. Moreover, repeated stress alters trafficking of leukocytes and redistribution of immune cells in peripheral blood and bone marrow. Along with reduction of bone marrow T, B cells myelopoiesis increased with elevated circulating neutrophils and monocytes for compensation [36]. The lymphoid cells of thymus were migrates from bone marrow. As high secretion of glucocorticoids stress increase precursor-T cells apoptosis in bone marrow, migration of pre-T cells was reduced [37]. Function of stem cell can also be affected by stress, including loss of proliferation and reconstruction capability, diminishment of self-renewal ability, increase apoptosis and final exhaustion of function [38-40].

For prenatal stress, placenta can protect fetus partly from the effects caused by prenatal stress, adaptive responses can be kept normal for short term but deleterated in long term [41,42]. As fetal stem cells are more plastic than adults', the pro-inflammatory factors of mother can influence the expression of integrin and chemoattractants which are important for the implant of hematopoietic stem cells [43]. Glucocorticoids and inflammatory factors can induce apoptosis of hematopoietic cell. In development process of fetal bone marrow, persistent stress can influence the signaling among immune constitutes which may affects the immune activation of stem cells and progenitor cells [44]. Dysfunction of bone marrow hematopoiesis can lead to decrease of cells and cause diseases [45].

As fetus liver is main hematopoietic organ, alteration of hepatic immune response which is susceptible to prenatal stress, can influence innate immune function [46,47], especially profound impact on T and B lymphocytes. Evidence shows that prenatal stressed fetus had lower level of hepatocytes. In offspring suffered prenatal stress, hematopoietic migration and maturation of stem T cells was delayed. All these can weaken the immune response of central and peripheral immune system which continue to adulthood [48,49].It is showed that neutrophils separated from umbilical cord blood of prenatal stressed neonates showed low resistance against pathogens and tended to fas-induced apoptosis [50]. 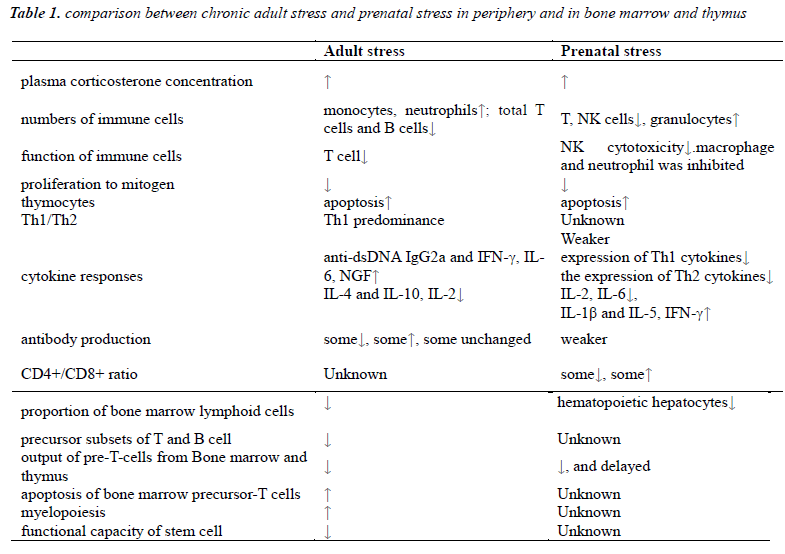 Table 1. comparison between chronic adult stress and prenatal stress in periphery and in bone marrow and thymus

Haemopoietic microenvironment, which may be affected by stress states, is important in maintaining the normal function of stem cells.The influence may lead to alteration in hematopoietic stem cells, progenitor cells or the environment around.

The stromal cells are a main part of bone marrow haemopoietic microenvironment . It provides nutrition and modulative factors to assists maturation and differentiation of precursor cells. Stromal cell was reported to be able to detect the physiological mechanical signals and vulnerable to environment harms, physiological mechanical stress can cause its dysfunction and impact the proliferation and multipotential differentiation of adult stem cells [51].

Nervous system, which is also an important part of microenvironment, can adjust the distribution of bone marrow niches [52,53], modulate of immune cells migration and reciprocal expression of immature progenitors [54]. As bone marrow harbours the ability of systemic regulation, the mature body is enabled to overcome the harm and maintain homeostasis. For fetus, haemopoietic system is immature, and stromal cells, stem cells in the fetal circulation are always in constant migration, so haemopoietic system may be more susceptible to stress. However, the effect of prenatal stress on bone marrow is still far from clear.

For the thymus, haemopoietic microenvironment can modulate migration of bone marrow T cells onto the thymus. For one part of microenvironment, thymic stromal cells would participate in selection, development and maturation of T cells. The regulation of haemopoietic progenitors from stromal cells is through the function of cytokines which facilitate the formation of cell and contacts of cell to extracellular matrix. The alteration of involved cytokines can affect the regulating function of haemopoietic microenvironmen. For adult, thymus is always atrophic and mature and the stress can cause little change.

However, the fetal thymus is still immature for the early years after birth. Evidence shows that prenatal stress can affect the size and morphology of the thymus. The elevated cortisones caused by prenatal stress can alter the thymic microenvironment and elevate the thymocytes ratios of CD4 SP /CD8 SP [55]. As the microenvironment constituted by T-regulatory cells, suppressive myeloid cells which are susceptible, the maturation of cytotoxic Tlymphocytes (CTL) may be affected. Pathological stats such as tumor cells are more feasible to attack the body. Furthermore, nervous system impact by chronic stress can also cause disturbance and decrease of thymocytes. Different from the bone marrow, fetal thymus was reported to be affected heavier in prenatal stress compared with adult stress in which bone marrow was affected heavier.

Special immune barrier in the fetus

The microenvironment formed in fetal-maternal interface is special in fetus. The microenvironment is modulated mainly by cytokines decidua cells secrete. With presence of glucocorticoids, the decidual tissues can suppress the function of T cells. Prenatal stress also causes damage to amniocytes and cytotrophoblast[56], which are also parts of microenvironment of fetal-maternal junction, and this lead to change of innate immune function of offspring [57]. However, the exact influence and the mechanism is under discovery.

Impact that prenatal stress and adult stress exert on immune system was compared in this paper, including alteration in immune cells, cytokines, hematopoietic stem/progenitor cells and microenvironment. For the adult stress, chronic stress is studied for its long-lasting effect. The effect is systematic, and the neuroendocrine system and immune system co-react with each other. Similarly, chronic prenatal stress will cause dysfunction of several systems in offspring. The prenatal stress leaves offspring prolonged immune disturbance, the origin can be the modification of nervous axis and haemopoietic cells, including stem cells and haemopoietic microenvironment. The placenta is also important in the protective and regulatory mechanism. However, there is stills plethora of questions about the mechanism about the modification of immune system, and the influence on immune imprinting is not quite clear. More researches and epidemiological surveys are necessary for further understanding about prenatal stress.