Fifteen New Zealand white rabbits (Qingdao Institute for Food and Drug Control, China; aged 5-6 months, weighing 2.6-3.0 kg, female/male-unrestricted) were all fed for 2 weeks under the same experimental conditions. This study was carried out in strict accordance with the recommendations in the Guide for the Care and Use of Laboratory Animals of the National Institutes of Health. The animal use protocol has been reviewed and approved by the Institutional Animal Care and Use Committee (IACUC) of Qingdao University.

Treatment of the animals

All rabbits received intramuscular injections of 400,000 U of penicillin, 30 min before surgery, and were anesthetized by intramuscular injection of 10 mg/kg ketamine hydrochloride. Room temperature was held constant at 24-26°C. After successful general anesthesia induction, 20-25% of the initial dose was supplemented according to the need for satisfactory anesthetic effect [12,13]. Each rabbit was then placed in the prone position, with limbs fixed on the operating table. Occipitocervical fur was removed, skin was disinfected using povidone iodine and draped with towels, and longitudinally incised from the occipital protuberance to the 4th spinous process (about 7 cm in length). Following local anesthesia with 2% lidocaine, tissues were incised and separated by layers. The skin, subcutaneous tissue, and paraspinous process muscles and ligaments were pulled aside using an automatic retractor to expose the venous plexus for bilateral amputation with cautery (Figure 1). After surgery, the tissues were disinfected and the muscles and skin were closed in layers. Routine postoperative administration of penicillin 400,000 U × 3 d was performed, and the recovering rabbit was kept at constant room temperature and fed under standard conditions.

Figure 1: Images of experimental animals during and after surgery. (A and B) Intraoperative exposure and ligation of the venous plexus; (C) Placement of electrophysiological stimulating and receiving electrodes.

Preoperative somatosensory evoked potentials and motor evoked potentials, as well as Magnetic Resonance Imaging (MRI), were performed. (1) Spinal cord signal intensity: T1 weighted imaging (T1WI) and T2 weighted imaging (T2WI) signal intensities were measured from clear images obtained in the sagittal plane from the upper atlantal edge to the lower axial edge. Relative Signal Intensity (SI) within the spinal cord was assessed as follows: SI (r)=(Ss-Sn)/Sn13, where Ss was the signal intensity within the spinal cord and Sn was the background noise signal intensity within the same view field. (2) Spinal cord area: Images were located and measured from the upper atlantal edge to the lower axial edge, and the spinal cord area at this level was calculated; ECP was performed 2, 6, and 12 h after surgery. MRI was performed immediately at 8 and 48 h after surgery. Meanwhile, the rabbits were monitored for movement during recovery, and the hind limbs were evaluated 1, 3, and 7 d after surgery using the Tarlov scale.

Grade 4: Can walk with only mild difficulty.

All data were expressed as ͞x ± s, and SPSS 16.0 (SPSS, Chicago, IL, USA) was used for statistical analysis. The spinal cord area and relative signal intensity were measured at different time points before and after surgery. The ECP signals, including amplitude and latency data, were analyzed using the least significant difference t-test, with P<0.01 indicating statistical significance.

There was no significant difference in the spinal cord area or T1WI and T2WI relative signal intensity between the two groups at different time points before and after surgery (P=0.12, P>0.05, Table 1 and Figure 2).

There was no significant difference in ECP signals, including amplitude and latency results, at different time points before and after surgery (P=0.09, P>0.05, Table 2 and Figure 3). 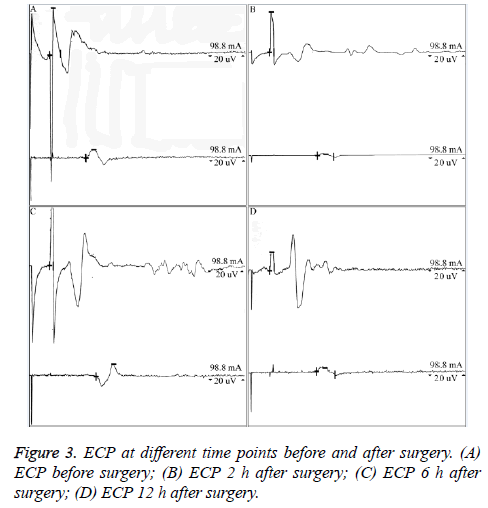 There was no motor dysfunction in the bilateral hind limbs at different time points before and after surgery, and all rabbits had a grade 5 Tarlov score.

There are a variety of treatment methods for irreducible atlantoaxial dislocation, including anterior, posterior, or anteroposterior joint approaches [14,15]. Because compression on the medullary spinal cord is mainly from the front, an anterior transoral or transnasal odontoid resection can achieve decompression [16,17]. Ai et al. applied the transoral approach to complete an anterior release as well as reduction and decompression assisted by plates [18-20]. In anterior dislocation of the atlas, the anterior longitudinal ligament, intrinsic cervical muscles, and contracted lateral mass joint capsule can affect surgical reduction. Cutting of all ligaments, muscles, and the capsule, aided by heavy cervical traction and instrumental probing, can assist in anatomical reduction of the atlantoaxial joint.

Wang et al. performed transoropharyngeal release, followed by posterior pedicle screw fixation [21]. However, transoral posterior pharyngeal surgery is associated with more complications, making perioperative management difficult [22]. Posterior surgeries for atlantoaxial dislocation include the Gallie method, the Brooks method, and the Magerl method [5,6,8]. The Gallie method and the Brooks method use steel wire for fixation, with obvious disadvantages. The wire fixation technique is difficult, and can prolong the operative time. As the spinal cord is easily damaged by the steel wire, these methods are rarely used alone. Goel et al. proposed reduction fixation after posterior transarticular process release, and achieved initial positive clinical results [10,11]. The advantage of this approach is that it can directly achieve reduction and fusion through surgical release, while requiring no anterior or posterior joint surgery. This method is especially suitable for patients with various types of arch deficiency. However, this method also requires transection of the posterior atlantoaxial joint venous plexus, thus increasing the possibility of significant intraoperative bleeding. Furthermore, whether complete bilateral transection can affect local circulation or even spinal cord function is still unclear.

The venous plexus lateral to the posterior atlantoaxial joint lies in the rear part of the joint as well as between the upper edge of the axial isthmus and the lower edge of the posterior atlantal arch, and comprises a rich network of prominent, bead-like vessels. The valveless venous plexus has thin walls, and haemostasis can be difficult after an injury. Batson described the vertebral venous plexus as composed of the plexus lateral to the posterior atlantoaxial articular dura mater and the extraspinal canal venous plexus [23]. This network can buffer the intracalvarial venous drainage caused by body flexion and changes in thoracic abdominal pressure, and can adjust intracranial pressure by transmitting respiratory effects and cardiovascular pressure changes, thus balancing the pressure in the venous system.

In this study, we examined the impact of ligating the posterior atlantoaxial venous plexus on spinal cord function in rabbits. The results revealed no significant difference in the spinal cord area or T1WI and T2WI relative signal intensities at different time points before and after surgery. There was also no significant difference in ECP signals, including amplitude and latency, in the experimental animals at different time points before and after surgery. In addition, there was no hind limb motor dysfunction at different time points before and after surgery, with all Tarlov scores graded 5. The Tarlov score, MRI signal area, T1WI relative signal intensity, and T2WI relative signal intensity in this study were correlated with each other. The results of this study showed that ligating the venous plexus will not affect the blood supply between the upper atlantal edge and the lower spinal cord edge, and will not cause spinal cord injury.

There are some limitations in this study. The sample size was small and the observation period was relatively short. Therefore, a long-term, large-scale observational study is required.

By calculating and analyzing the spinal cord area and the T1WI and T2WI relative signal intensities in the sagittal plane before and after ligating the posterior atlantoaxial joint venous plexus, as well as monitoring ECP signals (including the amplitude and latency), we can conclude that ligating the venous plexus does not affect the blood supply from the upper atlantal edge to the lower axial edge, and does not cause spinal cord injury.