Glial fibrillary acidic protein (GFAP) is the primary intermediate filament protein as a marker for the identification of astrocytes in the central nervous system in vertebrates. This present study was performed to identify GFAP-immunoreactive neurons in invertebrate (moth) by the light microscopy immunohistochemistry and immunoblotting. Our results indicated the presence of GFAP-like positive cell processes and cell bodies in the developing stages. The amount of GFAP immunoreactivity was maximized in the 3rd instar larva but diminished it, approaching to 5th instar. This changed amount of GFAP was also confirmed by immunoblotting with developing stages. GFAP immunoreactivity was also observed in both axons within nervi corpora cardiaci (NCC) I +II and corpora allata (NCA). We suggest that this glial filament protein may be conserved in the evolution of the invertebrate nervous systems and that it may be used as a label for some types of glial cells and as neurotransmitter of neuromodulator in the moth.

Glial cells regulate physiological and biochemical processes in the nervous system [1] and are implicated in the guidance of neuron outgrowth during development [2].

Glial fibrillary acidic protein (GFAP) is an intermediate filament (IF) protein and is expressed in the central nervous system in astrocyte cells. It is involved in many cellular functioning processes, such as cell structure and movement, cell communication, and the functioning of the blood brain barrier. It was first isolated from human multiple sclerosis plaques [3] and it has been biochemically characterized by the use of polypeptide analysis and immunogenic determinations [4].

To identify the sites of GFAP production and and its release is obviously necessary for investigating the regulatory mechanism for GFAP secretion. Localization of the source of GFAP in the brain has been studied by employing a variety of methods such as the observation of histological changes in the neurosecretory cells (NSCs). GFAP-like immunoreactivity has been shown in enteric glia [5], Schwann cells of unmyelinated peripheral nerve fibers [6,7], lens epithelium [8], adult brain of lizards [9], and in the visual system of the crab [10]. Filaments of morphological structure similar to the intermediate glial filament have been reported in the glial cells of many mammals, birds, reptiles, fishes [11], and in some invertebrates such as crab [10] and zebra fish [12] and snail [13]. Primary role of GFAP in vertebrate is confined in astrocytes, as a cytoskeleton stabilizer but also found in several invertebrates [14,15,16,17].

Paula et al.[13] confirmed that molecular weight of GFAP in the snail, Megalobulimus abbreviatus, particularly in cerebral ganglia and subesophageal mass, by immunohistochemistry and immunoblotting was about 55kDa. In this paper, we firstly describe and confirm the appearance of GFAP-immunoreactive cells in the embryonic brain of Bombyx mori and its immunoreactive distribution at developing stages as well as its molecular weight by immunblotting.

Cold-treated eggs of Bombyx mori were hatched about 10 days after incubation at 27-28°C with relative humidity of 60-70%. Larvae were reared on an artificial diet (mostly mulberry leaves) under a long-day photoperiod regimen (17 hrs light-7 hrs dark).

About 500 brains from each stage of Bombyx mori were homogenized in 100? of 2% NaCl with a glass-glass homogenizer cooled in an ice bath. The homogenate was allowed to stand for 1 hr in the ice bath, heated for 2 min in boiling water, rapidly cooled, and centrifuged at 10,000xg for 10 min. The resultant supernatant was mixed with a buffer containing 2% SDS, 10% (v/v) glycerol, 0.001% (w/v) bromophenol blue, and 100mM Tris- HCl (pH 6.8), and heated in boiling water for 4 min. This sample was electrophoresed according to the method of Laemmli on a 12% polyacrylamide slab gel (80X70X1 mm) and then were transferred to HybondTM nitrocellulose membrane (Amersham Pharmacia Biotech). The nitrocellulose membrane containing the immobilized proteins was first blocked with non-fat dry milk (5%) plus BSA (1%) in Tris buffered saline containing Tween (TBS-T) for 90 min. After the blockage, the membrane was washed twice in TBS-T under constant stirring for 3 min. The membrane was incubated with the monoclonal antibody mouse anti-GFAP (Millipore) under constant strirring for 2 h at room temperature. The membrane washed again with TBS-T. The secondary antibody used was an anti-mouse HPR (1:1500) which was incubated with the membrane for 90 min at room temperature and washed. The GFAP was detected using the chemiluminescence ECLTM (Amersham Pharmacia Biotech) and a HyperfilmTM (Amersham Pharmacia Biotech) diagnostic film.

Components immunoreactive to the GFAP antibody in the Bombyx brain extract were resolved by SDS-polyacrylamide gel electrophoresis (PAGE) and immunblotted (Fig. 4). 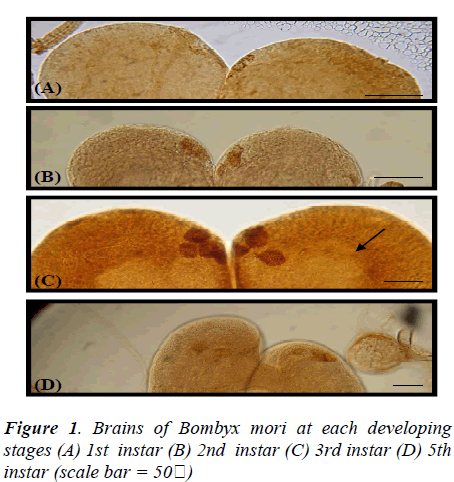 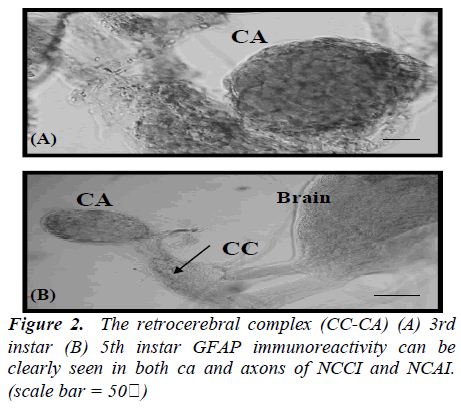 Figure 2. The retrocerebral complex (CC-CA) (A) 3rd instar (B) 5th instar GFAP immunoreactivity can be clearly seen in both ca and axons of NCCI and NCAI. (scale bar = 50°) 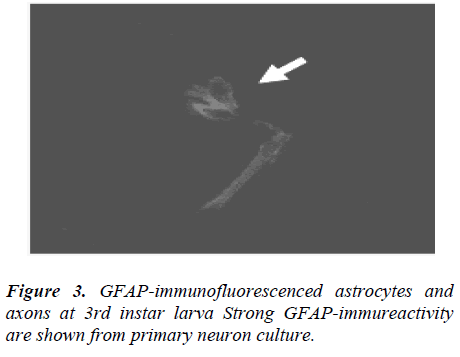 Figure 4. Immunoblotting with GFAP protein on 3rd and 5th instar larval brains, respectively. While developing stages, the amount of GFAP protein is decreased.

The brain extracts of each stage (500-brain equivalent each) were loaded and immunoblotted with the monoclonal antibody mouse anti-GFAP. The amount of GFAP immunoreactivity was maximized in the 3rd instar larva but diminished it, approaching to 5th instar. Comparing with two bands, there are surely difference between two larval stages.

GFAP is a classical marker for astorcytes in the vertebrate central nervous system, even though it has also been detected elsewhere in vertebrates [5,7,11,19].

GFAP is not strictly confined to astrocytes in the vetebrate central nervous system. GFAP-like immunoreactivity has been shown in enteric glia [5], Schwann cells of unmylinated peripheral nerve fibers [7,11], lens epithelium [8], and Kupffer cells in the liver [19]. Recently, it was shown that GFAP is also expressed by other cell types in CNS, including ependymal cells. GFAP has also been located in rat kidney glomeruli [20] and skin keratinocytes [21], osteocytes of bones, chondrocytes [22] and stellate-shaped cells of the pancreas and liver. Due to various distribution of GFAP expression in various locations, GFAP is thought to help to maintain astrocyte mechanical strength, as well as the shape of cells but its exact function remains poorly understood, despite the number of studies using it as a cell marker. In insects, intermediate filament-like proteins were biochemically identified within the olfactory dendrites in the antennae of two types of silkmoths [23]. More than one form of GFAP has also been observed in Xenopus [24] and axolotl [25], it has been suggested that GFAP may exist in more than one form in animals that retain radial glia throughout life [25].

The distribution in the Bombyx brain-CC-CA complex of GFAP nerves in CA might suggest that GFAP acts as a neurotransmitter or neuromodulator that affects the CA activity to synthesize and release the juvenile hormone, in addition to being simply released to haemolymph from CA. Furthermore, it is speculated that GFAP production from NSCs might be involved in the control of the CA activity. This also suggests that GFAP immunoreactivity produced in the brain neurons are transported via the axons within NCC I+II and NCA I to the corpora allata that appears to be a main accumulation and release site for the GFAP immunoreactivity in some brain cells produces. We found a similar molecular weight of 51kD from Bombyx mori brains with monoclonal antibody mouse anti- GFAP and Paula et al. [13] confirmed 55kDa from snails. These results suggest that GFAP has not only been conserved in vertebrate evolution, but also appear to be expressed in the nervous system of some lower and higher invertebrate.

In this paper, we could conclude that GFAP probably can be functioned and presumed as neurotransmitter of neuromodulator in the central nervous system as well as conservative evolution even though there is no direct evidences nor related functions between vetebrates and invertebrates.