A 70-year-old Japanese man complained of macrohematuria. He was diagnosed with high grade urothelial carcinoma (UC), G3, and underwent transurethral resection of bladder tumor (TUR-BT) twice. UC containing a chordoid component was found in the TUR-BT tissue samples. Total cystectomy combined with nephroureterectomy was performed because of deep muscular invasion into the bladder, in addition to intensive ureteral and prostatic invasion. Histopathological findings from the bladder tumor revealed an invasive UC with an adenocarcinoma component, combined with peculiar chordoid features associated with abundant myxoid matrix. The chordoid component metastasized to the right kidney, invading the prostate and right ureter. Chordoid component was detected in approximately 50% in total tumor extent Immunohistochemical analysis indicated that, although the chordoid component showed similar staining results to those of chordoma (namely, it was positive for CAM5.2 and cytokeratin 19 and focally positive for epithelial membrane antigen, carcinoembryonic antigen, and S100 protein), the UC and chordoid components were both negative for vimentin. In contrast, both chordoma and extraskeletal myxoid chondrosarcoma demonstrate positivity for vimentin, which is histologically similar to the present case. The patient had come to see us, before 11 months. A follow-up assessment showed no recurrence or distant metastasis 8 months after twice TUR-BT and five months since total cystectomy. But unfortunately, the patient dropped out from our follow-up data, because he did not come to our hospital. Thus, pathologists and clinicians must consider that a chordoid component may represent the malignant characteristic of UC.

Urothelial carcinoma (UC) commonly occurs in the urinary bladder. Distinct subtypes of UC have been recognized, as described in the Japanese general classification [1], such as squamous, glandular or trophoblastic differentiation, and nested, microcystic, micropapillary [2,3], plasmacytoid [4], and sarcomatous variants [5-7] However, UC with chordoid features is rare, with only 12 cases reported in USA [8] in the English literature. Myxoid matrix-rich UCs have been reported [5,9] to harbor an invasive characteristic [9]. We encountered one such rare case of UC associated with chordoid features containing an adenocarcinomatous component. Moreover, we believe this chordoid component may represent the malignant characteristics of UC, which include deep mural invasion, rapid tumor growth, vascular invasion and distant metastasis.

Immunohistochemical analysis of the chordoid component has been performed in order to compare it with the welldocumented results for chordoma and extraskeletal myxoid chondrosarcoma (EMC) [10-12], both of which have histological components that are somewhat similar to the chordoid features observed in the present case.

The patient was a 70-year-old Japanese man who experienced macrohematuria. Cytological assessment of a urine sample demonstrated the presence of malignant cells of high-grade UC. Accordingly, transurethral resection of bladder tumor (TUR-BT) was performed. After a second TUR-BT, total cystectomy combined with right nephroureterectomy was performed, because of extensive ureteral surface invasion of UC approximately 12 cm towards right kidney.

The resected tissues were fixed in 10% formalin solution and then embedded in paraffin. Dewaxed sections were stained with hematoxylin and eosin. Immunohistochemical staining was performed with Ventana BenchMark GX (Roche Diagnostic Co. Ltd., Tokyo, Japan), following the manufacturers protocol. The antibodies used are listed in Table 1.

Table 1: Antibodies used in this study.

Written informed consent was obtained from the patient, and his identity was strictly protected.

With regard to the TUR-BT tissues, both the usual papillary UC (Figures 1A and 1B) and the partially adenocarcinomatous component (Figure 1C) contained approximately 50% of chordoid features in total tumors of both TUR-BT and total cystectomy (Figures 1C and 1D) upon histological examination. Then approximate size of bladder tumor was 7 × 7 × 2.5 cm. The chordoid features contained abundant myxoid matrix, and the tumor cells were arranged in a cord-like pattern. Using a higher magnification, the tumor cells of the chordoid pattern were observed to be embedded in the basophilic matrix. These tumor cells were positive for cytokeratin CAM5.2 (Figure 1E), and had a high MIB-1 antibody labeling index (LI). With respect to M*IB-1, approximately 20% nuclear positivity was found; however, in some sections, a LI of more than 50% was observed (Figure 1F). The tumor in the extirpated urinary bladder was deeply and irregularly ulcerated (Figure 2A, arrow), and histologically classified as UC associated with a chordoid component, with invasion into the prostate. The cut surface was markedly hemorrhagic and necrotic. 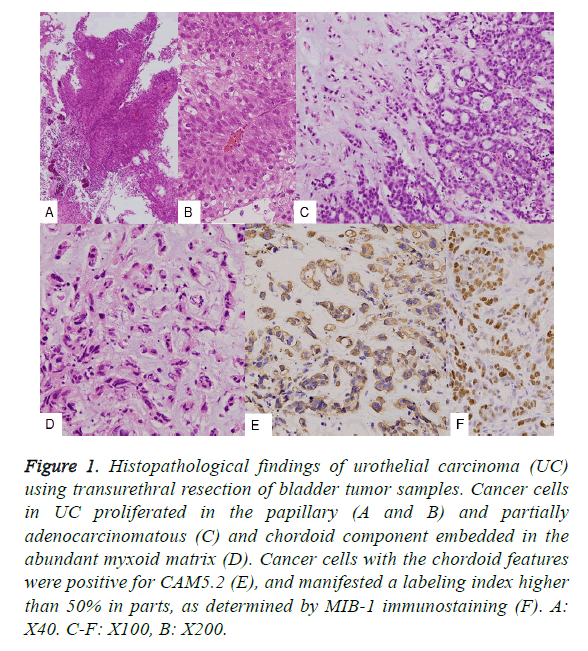 Figure 1: Histopathological findings of urothelial carcinoma (UC) using transurethral resection of bladder tumor samples. Cancer cells in UC proliferated in the papillary (A and B) and partially adenocarcinomatous (C) and chordoid component embedded in the abundant myxoid matrix (D). Cancer cells with the chordoid features were positive for CAM5.2 (E), and manifested a labeling index higher than 50% in parts, as determined by MIB-1 immunostaining (F). A: X40. C-F: X100, B: X200. 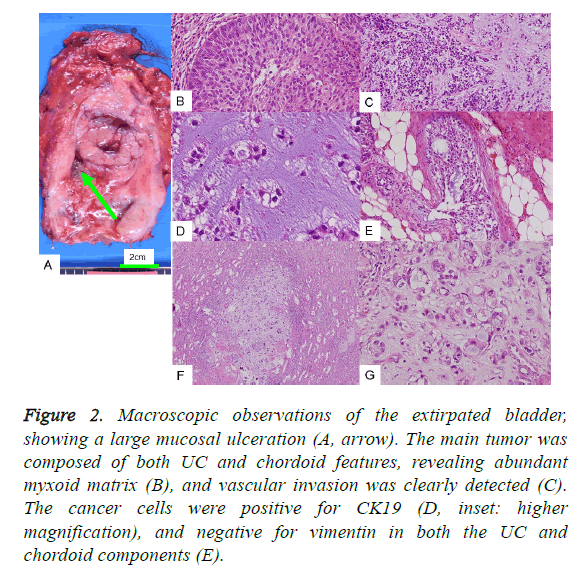 Figure 2: Macroscopic observations of the extirpated bladder, showing a large mucosal ulceration (A, arrow). The main tumor was composed of both UC and chordoid features, revealing abundant myxoid matrix (B), and vascular invasion was clearly detected (C). The cancer cells were positive for CK19 (D, inset: higher magnification), and negative for vimentin in both the UC and chordoid components (E).

The cancer cells of the foremost UC lesion proliferated into both the muscular and subserosal layers. Particularly abundant basophilic material was found partly embedded in the cancer cell cords (Figure 2B), and obvious vascular invasion was found in the urinary bladder (Figure 2C). Immunohistochemical examination revealed UC associated with a chordoid pattern, positive for both CK7 and CK19 (Figure 2D), but not p63. The characteristic findings were that cancer cells of both UC and chordoid components were negative for vimentin (Figure 2E). In the current case, focal expression of Epithelial Membrane Antigen (EMA), Carcinoembryonic Antigen (CEA), and S100 protein was detected, which is observed in chordoid sarcomas (Table 2). GFAP and CD10, observed in both UC and choroid sarcomas, were both negative, whilst CD57 was positive.

Table 2: Immunohistochemical results of the tumors.

Furthermore, the extirpated kidney revealed metastasis of myxoid focus containing cancer cells of an irregular cord pattern (Figures 2F and 2G). Invasion was also detected in the resected prostate. It is interesting that the resected kidney also contained three renal tumor nodules (each 1-2 mm in size), in addition to the metastasis of chordoid pattern of UC. The three renal tumor nodules were histologically confirmed as two nodules of clear cell renal cell carcinoma, each 2 mm in size, and also as angiomyolipoma. Such a combination of high grade UC with renal cell tumors is rare. Unfortunately, the patient did not come to see us after five months of total cystectomy. But the clinical course was so good, with no recurrence or distant metastasis.

The chordoid features in the present case are rare and were previously shown to have an unfavorable prognosis8. The immunohistochemical features of the present case are partially similar to those of chordoma; however, they are completely different from those of EMC, as shown in Table 2 [10-12]. In the present case, the chordoid component showed a similar staining pattern to UC, except for the focal positivity for CEA, EMA, and S100 protein. These immunopositive reactions are common with chordoma [12]. In addition, chordoma is negative for CK7 and positive for vimentin, but UC and its chordoid component were positive for CK7 and negative for vimentin as shown in Table 2. Although chordoma is a benign tumor [12], it has similar staining patterns to those of the chordoid component of bladder cancer, as shown in Table 2. EMC is only positive for both vimentin and S100 protein, and is negative for the remaining markers [10,11] as listed in Table 2. This case showed a high grade of malignancy, metastasizing to the kidney and invading the ureter and the prostate. Recently, 12 similar cases were reported from USA in one report [8]; however, no other reports of similar cases written in the English language have been found thus far. Of the 12 cases, 8 occurred in men and 6 occurred in women. Only 1 of the patients underwent nephrectomy [8]. Lymph node metastases were found in 6 of the 8 cases. Generally, these cases were high-grade malignancies in terms of clinical staging. Myxoid matrix-rich UC has been reported to have an unfavorable prognosis associated with invasion [9].

With regard to carcinosarcoma of the bladder, its monoclonal origin has been clearly demonstrated [13-16]. An identical point mutation of the TP53 protein was found in each of the sarcomatous and carcinomatous sections in the identical case16. Thus, high grade UC and chordoid pattern probably have the same origin, which is likely to be common pluripotent progenitor cells [15]. In one study, the chondrosarcomatous component in a case of carcinosarcoma of the urinary bladder was revealed to have metastasized to the kidney and lymph node [17]. Moreover, chondrosarcoma in urinary carcinoma has been shown to manifest a poor prognosis [18]. The predominant point is that the chondrosarcomatous pattern signified a poor prognosis, as with the chordoid component in the present case.

Thus, chordoid features in high grade UC should be considered as an unfavorable prognostic factor, and clinicians and pathologists must perform careful evaluations when these patterns are found in cases of bladder cancer.

The author(s) declared no potential conflicts of interest with respect to the research, authorship, and/or publication of this article.