Objective: To study the effect of Wnt/β-catenin signaling pathway on hypoxia induced proliferation and invasion in lung cancer cell line A549.

Results: The results demonstrated that hypoxia could promote A549 cells proliferation and invasion. The mRNA and protein level of HIF-1α and β-catenin was upregulated by hypoxia treatment, whereas β- catenin siRNA could block these processes.

Lung cancer is the most common malignant tumor, and frequently seen in China. According to the World Cancer Report 2014 issued by the World Health Organization (WHO), the incidence rate and mortality rate of lung cancer have boosted in the world, and rank first in all malignant tumors [1]. Among all types of lung cancers, Non-Small Cell Lung Cancer (NSCLC) occupies almost 80%, but the 5 y survival rate is only 13% [2,3]. Besides, NSCLC is also the most common form of lung cancer with the highest mortality rate due to its poor prognosis in spite of the promotion and application of neoadjuvant therapy and individualized comprehensive therapy [4,5]. Abnormal proliferation and distant metastasis have been considered as the major factors leading to NSCLC-related death, which renders a great significance to the in-depth research into the molecular mechanism for ameliorating the clinical treatment and prognosis of patient with lung cancer. During the rapid growth of solid tumors, contradictions lie between the rapid proliferation and retarded peripheral vascular growth of tumor cells in a short time, which could result in insufficient nutrition and oxygen for tumor cells, thereby generating an ischemic and hypoxic microenvironment in focal tissues of tumor [6-8]. Furthermore, hypoxic microenvironment will affect cell proliferation, angiogenesis, invasion and metastasis of tumors [9-11]. Studies have shown that Wnt/β-catenin signaling pathway is involved in the proliferation, differentiation, metastasis and invasion of tumor cells [12,13], but no literature has reported the effect of Wnt/β- catenin signaling pathway on the proliferation, invasion and metastasis of NSCLC A549 cells under the hypoxic environment. Thus, in this study, we aimed to investigate the potential mechanism of Wnt/β-catenin signaling pathway through discovering the effects of Wnt/β-catenin signaling pathway on NSCLC A549 cell proliferation and invasion under the hypoxic microenvironment in an in-vitro experiment.

Cell culture: Lung cancer A549 cells were cultured using the RPMI-1640 medium supplemented with 10% fetal bovine serum, 100 U/ml penicillin, 100 μg/ml gentamycin and phenol red in an incubator (37°C, 5% CO2 and saturated humidity), and digested using 0.25% trypsin for subculture. When the cell infusion reached about 70-80%, cells were starved using the serum-free culture medium followed by 24 h of culture in an incubator in a low concentration of O2. Thereafter, detections of relevant indicators of A549 cells were carried out. In this experiment, regular condition for culture was set as 37°C, 5% CO2 and 20% O2, while the hypoxic condition was set as 1% O2.

Preparing the growth curve under different culture conditions through CCK-8: Lung cancer A549 cells in 3rd subculture in logarithmic phase were collected for regular digestion, and then seeded on the 96 well plate at density of 1 × 104/ml (200 μL/well), in which we set a well for blank control, where only 200 μL medium was added. In this experiment, cells were seeded on two plates. Thereafter, cells were cultured in the hypoxic incubator and regular incubator followed by CCK-8 detections respectively at 3, 6, 12 and 24 h in 5 experiment wells and 1 blank well, where 20 μL CCK-8 was added for 2 h of incubation. Then, plates were taken out for detection the absorbance (A) at wavelength of 450 nm with a microplate reader. The growth curve was then prepared with the time (h) as the x-coordinate and A value as the ycoordinate.

RNA extraction and real-time PCR: Expression of Wnt/β- catenin was detected through RT-PCR in following steps: cells in each group were washed using pre-cooled Phosphate Buffer Saline (PBS) three times on ice; in each well, 1 ml TRIzol RNA extraction reagent was added for extracting the total RNA according to the instructions; A260/A280 ratio was also detected via ultraviolet spectrometry to calculate the RNA concentration, which was carried out in triplicate. Afterwards, through reverse transcription of the extracted RNA, cDNA was prepared for following PCR with the primers synthesized by Shanghai Tsingke Biotech Co., Ltd. The primer sequences are shown as follows: β-actin, forward primer 5'- ATGGGGAAGGTGAAGGTCG-3', reverse primer 5'- GGGTCATTGATGGCAACAATATC-3'; HIF-1α, forward primer 5'- CGUACUGCACUCCAAAUATT', reverse primer 5'- UAUUUGGAGUGCAGUAGCGTT-3'; β-catenin forward primer 5'-GCTGCTGTTTTGTTCCGAATGT-3', reverse primer 5'-GCCATTGGCTCTGTTCTGAAGA-3'. Real-time quantitative PCR was carried out in 20 μL reaction system supplemented with 10 μL mixture, 1 μL probe primer and 2 μL cDNA, and in following conditions: initial denaturation at 95°C for 3 min; 35 cycles of 48°C for 30 s and 72°C for 1 min; extension at 72°C for 10 min. PCR products were loaded for 1.5% agarose electrophoresis followed by imaging using gel imager and scan of gray value in triplicate.

Western blotting assay: After regular culture or hypoxic culture for lung cancer A549 cell lines, the adhering cells in 6- well plate were washed using cold PBS three times on ice followed by the treatment of RIPA buffer. Cell lysate was then collected using a cell scraper and transferred into a 1.5 ml EP tube. Following 30 min of lysis on ice, the lysate was centrifuged at 12000 rpm for 10 min and the supernatant was preserved at -20°C. After the measurement of protein concentration via BCA method, 5×loading buffer was added into the tube for evenly mixing the proteins that were later placed in 95°C water bath for denaturation. The 12% SDSPAGE was prepared in advance, and in each well, 30 μg protein samples were loaded for aggregation of proteins under 80 V. The aggregated proteins were then separated under 100 V and transferred on a PVDF membrane. After membrane was blocked using 5% skimmed milk for 1 h, rabbit anti-human polyclonal antibodies of HIF-1α (1: 800) and β-catenin (1:1000), and the mouse anti-human monoclonal antibody of β- actin (1:3000) were added onto the membrane for incubation at 4°C overnight. Membrane was then washed three times (5 min/ time) on a decoloring shaker, and incubated with HRP-labeled goat anti-mouse or anti-rabbit IgG for 1 h at room temperature. Membrane was washed three times (5 min/time) again using the Tris-Buffer Saline+Tween 20 (TBST), and treated with ECL reagent for reaction at room temperature for 1 min followed by color development.

Detecting the invasion capability of cells via Transwell invasion experiment: Before this experiment, all reagent and instruments were placed on ice in advance, and Transwell chambers were placed in the 6-well plate. Fifty μL Matrigel (diluted with serum-free medium, 1:2) was coated on the surface of membrane for 20 min of incubation at 37°C. After the Matrigel dried completely, the plate was placed in the incubator for 4 h. The next day, lung cancer A540 cell lines in logarithmic phase were starved in serum-free DMEM for 24 h followed by digestion with 0.25% EDTA-trypsin. Sequentially, cell suspension was prepared with the serum-free DMEM, where the cell density was adjusted to 4 × 105/ml, and the cell viability was above 95% through trypan blue staining. In the upper chamber, 200 μL serum-free cell suspension was added; while in the lower chamber, DMEM supplemented with 10% fetal bovine serum was added (600 μL/well). Afterwards, chambers were delivered to the incubators for regular culture or hypoxic culture for 24 h. Chambers were then washed three times using PBS to remove the medium, and wet cotton swab was used to collect the cells that failed to pass into the upper chamber. Those cells were fixed in 4% paraformaldehyde for 20 min. Chambers dried completed at room temperature, stained using crystal violet for 20 min, and delivered under the inverted phase contrast microscope for counting the cells passing through the membrane. Five visions were selected for cell count under the microscope (400X), and the average served as the results.

All data were presented as mean ± standard deviation, and statistical analysis was performed using SPSS 19.0 for oneway ANOVA. p<0.05 suggested that the difference had statistical significance. 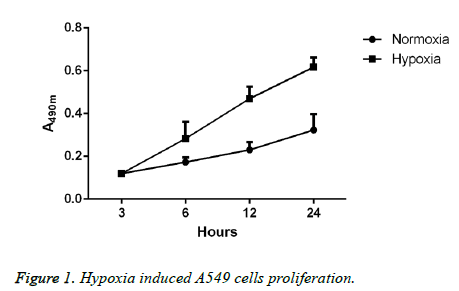 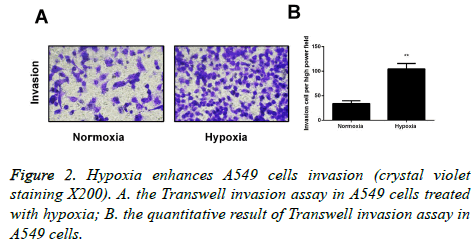 After 24 h of culture under the hypoxic or regular environment, RT-PCR and Western blotting assay were performed to detect the mRNA and protein expressions of β-catenin. Results showed that compared with the cells in regular environment, mRNA and protein expressions were obviously increased in A549 cells in the hypoxic environment, and the differences had statistical significance (p<0.05), suggesting that hypoxia can activate the Wnt/β-catenin signaling pathway (Figure 3). 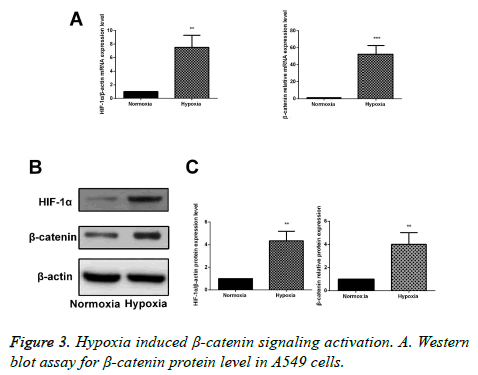 After transfection of A549 cells with β-catenin siRNA and β- catenin-NC for 48 h, we carried out the RT-PCR and Western blotting assay to measure the mRNA and protein expressions of β-catenin, and found that compared with the cells in the β- catenin-NC group and blank control group, a significant decrease was identified in expression of β-catenin in cells of β- catenin siRNA group. Differences had statistical significance (p<0.05; Figure 4). 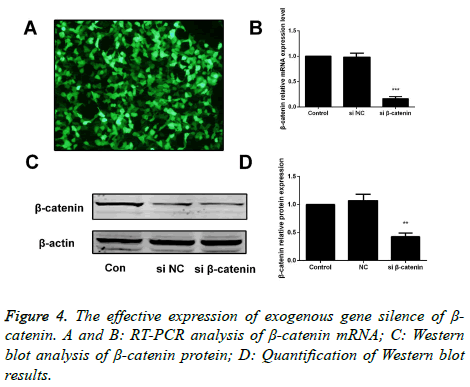 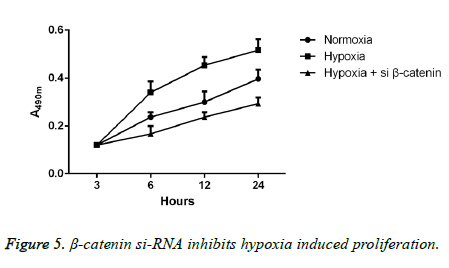 Figure 6: β-catenin si-RNA attenuates hypoxia induced A549 invasion (crystal violet staining X200). A and B: Transwell assay detect the invasion abilities of A549 and quantification of the results.

At present, lung cancer is one of the malignant tumors severely threatening the health of human beings with the highest morbidity and mortality rate in the world; thus, research to discover the pathogenesis and searching for effective treatment have been one of the hotspots attracting wide attention [14,15]. In healthy people, variations in oxygen concentration show a critical regulatory effect on metabolism, proliferation and differentiation of cells [16]. To adapt to the stress responses to hypoxic metabolism, tumor cells could activate a series of signaling pathways, including the pathways promoting the peripheral angiogenesis, enhancing cell metabolism and migration, or facilitating the abnormal proliferation, metastasis and drug resistance [17,18]. Under the hypoxic environment, these biological events could not only alter the biological features of the tumor cells, but also result in the instability in genome of tumor cells, thereby leading to the malignant transformation of tumor, or even metastatic invasion and migration. Lung cancer is one of the most common solid tumors, and during the tumor growth, it is always accompanied by rapid abnormal proliferation, which will result in the insufficiency of local blood supply, and furthermore, the ischemic and hypoxic microenvironment, where survived tumor cells are inevitably exacerbate the hypoxia in the microenvironment. Under the hypoxic and ischemic condition, tumor cells can alter the surrounding environment through autocrine or paracrine, thereby accelerating the growth and progression of tumor. This process is also frequently accompanied with some variations of their own features, e.g. stronger local infiltrative and distant invasive ability, which are conducive to the metastasis of tumor cells.

Wnt/β-catenin signaling pathway is widely involved in the cellular information regulation, and plays vital roles in cell proliferation, tissue repair, embryonic development and development and progression of tumors, including lung cancer [19]. β-catenin, an intracellular multifunctional protein and the core regulatory element in Wnt signal pathway, mainly participates in regulation of intercellular adhesion. Normally, in normal, mature tissue cells, β-catenin in cytoplasm can bind with the E-cadherin on cell membrane to promote the intercellular adhesion, but downstream target genes can hardly be activated due to the insufficiency of free β-catenin in cytoplasm. When Wnt signal pathway is activated by the stimuli to cells, Wnt ligand, binding with the Frizzled/LRP receptor, can activate the Dsh through phosphorylation, thereby isolating the β-catenin from APC/Ax- in/GSK-3β; the accumulation of β-catenin would further enter the nuclear to combine with the TCF/LEF complex, thereby activating the transcription of downstream target genes, through which Wnt signal pathway can regulate various biological events, like cell proliferation, apoptosis, mobility and differentiation [20,21]. Research has reported the close correlations of β-catenin with the development and progression of a variety of tumors, including liver cancer [22], gastric cancer [23] and lung cancer [24]. All these studies have shown that β-catenin is highly expressed in the above tumor tissues. In liver cancer cells, Wnt/β-catenin signaling pathway can promote the invasion and metastasis of cells through enhancing the hypoxia-induced epithelial-mesenchymal transition, and the expression of β- catenin is negatively correlated with the survival duration of patients after resection [25,26]. Also, in colorectal cancer cells, hypoxic environment can facilitate cell growth and invasion through activation of Nur77-β-catenin loop [27]. Nevertheless, there remain no literatures reporting the mechanism of Wnt/β- catenin signaling pathway in regulation of proliferation and invasion of lung cancer cells in hypoxic microenvironment.