Objective: To investigate the role of Wnt/β-catenin signaling pathway on hypoxia induced proliferation and invasion in osteosarcoma cell line SaOS-2.

Methods: Cultured SaOS-2 cells were treated with hypoxia for 24 h. The proliferation rate was detected by CCK8; the mRNA and protein expression levels of β-catenin were detected by RT-PCR and Western blot; the effect of hypoxia on invasion ability of SaOS-2 cells was detected with Transwell method. Furthermore, β-catenin siRNA was used to investigate the role of β-catenin on hypoxia induced proliferation and invasion.

Results: The results demonstrated that hypoxia could promote SaOS-2 cells proliferation and invasion. The mRNA and protein level of β-catenin was upregulated by hypoxia treatment, whereas β-catenin siRNA could reverse these processes.

As one of the primary solid tumor in bones with extremely high malignancy, Osteosarcoma (OS) mostly strikes the population aged between 10 and 24 y old, and is usually characterized by the features such as hidden onset, rapid growth rate, excessive proliferation of tumor cells and distant metastasis and invasion [1,2]. In recent years, with the promotion and application of neoadjuvant chemotherapy and individualized comprehensive therapy, the treatment for OS at an early stage have gained significant efficacy, but patients with advanced bone tumors still suffer from the recurrence and distant metastasis; hence, in-depth research on the abnormal cell proliferation and the molecular action mechanism of distant invasion and metastasis is of great clinical significance for improving the clinical efficacy of OS and prognosis of patients [3]. During the rapid growth of solid tumor, contradiction lying between fast proliferation of tumor cells and internal blood supply of tumor gives rise to the formation of hypoxic-ischemic environment in local tissues of tumor, further impacting the growth, angiogenesis, invasion and metastasis of tumor cells [4]. The study showed that Wnt/β- catenin signal pathway is closely associated with the proliferation, differentiation, invasion and metastasis of tumor cells [5]. However, there remains no literature reporting the effect of Wnt/β-catenin signal pathway on the proliferative activity, invasion and metastasis of human SaOS-2 cells in OS in hypoxic environment. In this study, we investigated the effect of in-vitro hypoxic environment on the proliferation and invasion of human SaOS-2 under the in-vitro hypoxic environment, and explored the potential action mechanism of Wnt/β-catenin signal pathway in this process.

Cell culture: Human SaOS-2 cell lines were cultured in a cell incubator (37°C, 5% CO2 and saturated humidity) using the Dulbecco's Modified Eagle Medium (DMEM) containing 10% Fetal Bovine Serum (FBS), 100 U/ml penicillin and 100 μg /ml gentamicin. Then cells were digested using 0.25% trypsin and passaged. When 70 to 80% of cells were fused, cells were starved using serum-free medium followed by incubation in a hypoxic incubator, during which detection for associated indexes of SaOS-2 cell was carried out in different periods (8, 16 and 24 h). Culture conditions in normal circumstances were 37°C, 5% CO2 and 20% O2; while the oxygen concentration in hypoxic circumstances was 1% O2.

Preparation of growth curves under the different culture conditions via CCK-8 detection: After the 3rd generation human SaOS-2 cell lines in logarithmic phase were regularly digested, those cells were inoculated onto a 96-well plate in a density of 1 × 104/ml with 200 μL in each well, and replicate wells were set as control (only 200 μL medium was added into the wells). In this experiment, a total of 2 plates were used for inoculation, and placed into the hypoxic incubator and normal incubator, respectively. CCK-8 detections were carried out in 5 wells and 1 replicated well respectively at 8, 16 and 24 h after culture in following steps: In each well, 20 μL CCK-8 reagent was added; after 2 h of incubation, the plate was taken out and placed into the microplate reader to detect the Absorbance value (A) at the wavelength of 450 nm, and growth curves were prepared with time (d) as the horizontal ordinate and value A as vertical ordinate.

RNA extraction and real-time PCR detection: RT-PCR was applied to detect Wnt/β-catenin expression in following procedures: Pre-treated cells in each group were rinsed for 3 times using the pre-cooled Phosphate Buffer Saline (PBS) on ice; in each well, 1 ml Trizol RNA extraction solution was added to extract the total RNA in cells according to the instructions of kit; A260/A280 ratio was detected via ultraviolet spectrophotometry to calculate the concentration of RNA, and the detection was performed for 3 times. According to the reverse transcription kit, reverse transcription was carried out to prepare the cDNA using the extracted RNA for PCR cyclic amplification. Primers used for PCR in following sequences were synthesized by Invitrogen (Shanghai): GAPDH, upstream primer 5'- ATGGGGAAGGTGAAGGTCG-3', downstream primer 5'- GGGTCATTGATGGCAACAATATC-3'; β-catenin upstream primer 5'-GCTGCTGTTTTGTTCCGAATGT-3', downstream primer 5'-GCCATTGGCTCTGTTCTGAAGA-3'. Reaction conditions were set as follows: pre-denaturation at 95°C for 3 min; a total of 35 cycles of 94°C for 30 s, 48°C for 30 s and 72°C for 1 min; extension at 72°C for 10 PCR products were used to perform 1.5% agarose gel electrophoresis followed by grey scan using gel imaging system and this procedure was repeated for 3 times.

Western blotting detection: After human SaOS-2 cell lines were cultured under the normal and hypoxic environment, cells attached to the surface of 6-well plate were washed using precooled PBS on ice for 3 times and then added into the lysate of Radio-Immunoprecipitation Assay (RIPA); cell lysate was then collected by cell scraper and transferred to 1.5 ml EP tubes followed by lysis on ice for 30 min . Then EP tubes were placed into a centrifuge for centrifugation at 12,000 rpm for 10 min. Supernatant was then preserved at -20°C while the sediment of cells was discarded. Thereafter, the sample was loaded onto the gel for electrophoresis at 80 V to aggregate the proteins which were then isolated under the voltage of 100 V and transferred onto the membrane. After being blocked using 5% skimmed milk for 1 h, the membrane was incubated using rabbit anti-human β-catenin (1:1000) and mouse anti-human monoclonal antibodies at 4°C overnight and washed for 5 min on a decoloring shaker using Tris-buffered saline-Tween 20 (TBST) for a total of 3 times. Membrane was then incubated using HRP-labeled goat anti-mouse or anti-rabbit IgG for 1 h and washed for 5 min using TBST for a total of 3 times. Thereafter, ECL reagent was added onto the membrane for 1 min of reaction at room temperature followed by exposure under X-ray, photographic fixing and imaging development.

Detection of cell invasion capability via Transwell cell invasion experiment: Before experiment, Matrigel was melted at 4°C. 40 μL diluted Matrigel was spread on the surface of polycarbonate microporous membrane and the volume ratio of Matrigel to the serum-free medium was 1:3. Then the medium was placed into an incubator for coagulation at 4 h for later use. In the next day, human SaOS-2 cell lines in logarithmic phase were starved in serum-free DMEM culture solution for 24 h, and digested using 0.25% Ethylene Diamine Tetraacetic Acid (EDTA). Thereafter, single-cell suspension was prepared using serum-free medium, in which cell density should be adjusted to 4 × 105/ml and cell vitality reached above 95% via the detection of trypan blue staining. In each upper Transwell chamber, 200 μL serum-free cell suspension was added, while in each lower Transwell chamber, we added the DMEM culture medium containing 10% FBS with 600 μL in each well followed by 24 h of culture in an incubator under normal circumstances and hypoxic environment. After culture, Transwell was taken and the medium was removed by washing using PBS for 3 times. In upper Transwell chambers, cells that failed to pass through the membrane were scrapped gently using wet cotton swabs and fixed in 4% paraformaldehyde for 20 min. Thereafter, Transwell chambers were dried at room temperature followed by further staining using crystal violet for 20 min. Then cells that passed through the membrane in 5 microscopic fields (central, left, right, upper and lower fields) were counted under the inverted microscope (400X) and the average of cell count was calculated.

All values were expressed by mean ± standard deviation. Oneway Analysis of Variance (ANOVA) was carried out on SPSS 12.0 software for statistical analysis. p<0.05 suggested that the difference had statistical significance. 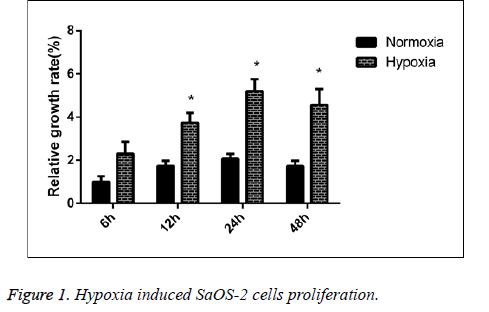 According to the results of Transwell invasion experiment, it was found that compared with the cells cultured under normal circumstances, the invasion capability of cells that were cultured in hypoxic environment for 24 h was significantly enhanced (Figure 2). 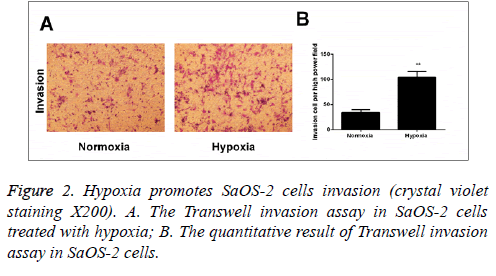 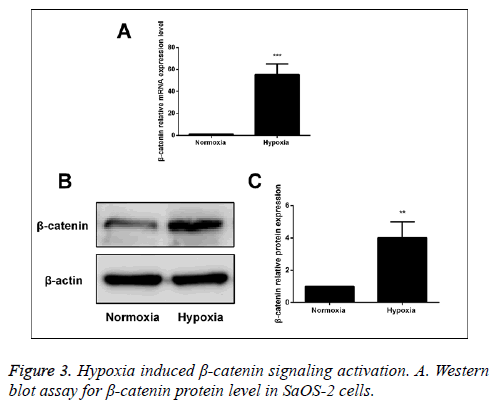 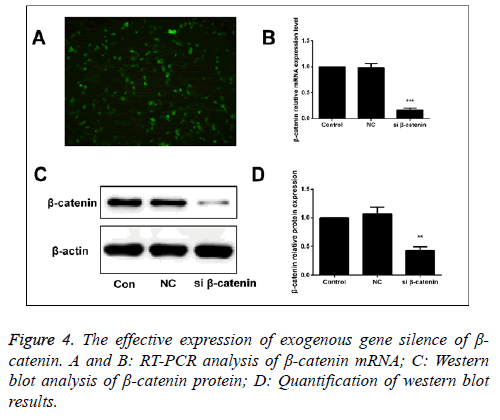 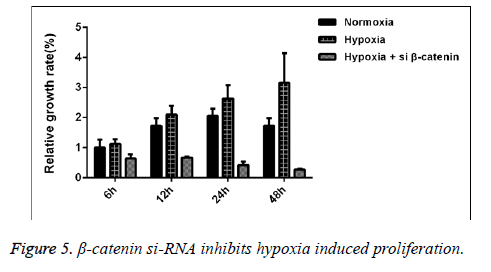 In Transwell migration experiment, we found that after 24 h of culture under hypoxic environment, the invasion capability of SaOS-2 cells in the β-catenin-NC group (hypoxic environment) was significantly increased compared with the normal group, while that of cells in β-catenin siRNA group was obviously inhibited (Figure 6). 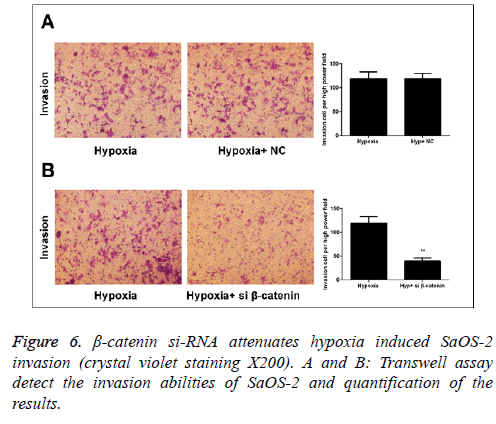 OS, frequently seen in children and teenagers in clinical practice, is a kind of marrow stromal cells-sourced bone tumor with high malignancy, and usually characterized by various biological characteristics, such as high malignancy, rapid growth in local tissues, susceptibility to distant invasion and metastasis in an early stage and recurrence. The occurrence and development of OS are caused by co-regulation multiple factors and procedures, and currently there remains no effective treatment methods [6]. In recent years, with the development and application of new diagnostic and therapeutic methods in clinical practice of orthopedics, great achievements have been gained in the treatment of OS, but no increase has been identified in 5-year survival rate of OS patients. The essential cause is that among the patients who are clinically diagnosed as OS, 80% of them have experienced the distant metastasis, most of which are pulmonary metastasis, which is also the major cause of death for OS patients in advanced stage [7]. In addition, during the formation and growth of OS, abnormal proliferation of tumor cells is often accompanied, while the infinite proliferation of local tumor tissues is always associated with the retarded angiogenesis, finally resulting in insufficient blood supply in the solid part of tumor and formation of hypoxic-ischemic microenvironment [8,9]. Previous studies have indicated that the hypoxic microenvironment of tumor can intervene the process of occurrence and development of tumor via affecting the proliferation and invasion of tumor cells [10-12]. Thus, indepth research on the abnormal proliferation of OS cells under the hypoxic microenvironment and the potential molecular mechanism of invasion and metastasis can determine the specific target for effective prevention and treatment to search for new intervention strategy, which is of great significance for improving the clinical efficacy of OS and also the key to the treatment of OS and amelioration of clinical prognosis.

Being widely involved in the in-vivo cellular information regulation, Wnt/β-catenin plays an important role in cell proliferation, tissue repair, embryonic development and tumorigenesis and development (including OS) [13,14]. Research has shown that β-catenin is closely associated with occurrence and development processes of multiple tumors, mainly including the esophagus cancer [15], liver cancer [16], gastric carcinoma [17] and OS [18]. All these studies have revealed that β-catenin is highly expressed in these tumor tissues. Additionally, the study has identified the activation of Wnt/β-catenin signal pathway under the hypoxic microenvironment in tumors, and the activated Wnt/β-catenin signal pathway, via regulating the activity of downstream target genes, can intervene a series of biological events, such as cell proliferation, differentiation, apoptosis and invasion, finally affecting the occurrence and development of multiple tumors [19]. However, there are few studies investigating the effect and molecular mechanism of Wnt/β-catenin signal pathway in the occurrence of OS under the hypoxic microenvironment.

In conclusion, we, in this study, preliminarily confirmed that the hypoxic microenvironment in human SaOS-2 cells can activate the Wnt/β-catenin signal pathway to facilitate the abnormal proliferation and distant invasion and metastasis of tumor cells, which is conducive to further understandings about the pathogenesis of OS. Thus, with the great clinical significance and a good application prospect, in-depth studies on the roles and regulatory mechanism of Wnt/β-catenin signal pathway in the occurrence and development of OS are necessary for targeting blockage of the relevant molecules in Wnt/β-catenin signal pathway to inhibit the abnormal proliferation, invasion and metastasis of tumor cells. This will provide more new ideas and evidence for the specific treatment of OS.