Diagnosing tumor at early stages is very critical for treatment and understanding the disease pathogenesis. Analyzing and detecting tumor earlier helps us in deciding the course of actions for therapy. But analyzing multimodal cancer data and its sub-types is a very difficult and sensitive task and need classification methods with high accuracy. Also the data may be nonlinear and time sensitive. Hence a higher order neural network models called Pi-Sigma artificial neural network and functional link artificial neural network based on glowworm swarm optimization algorithm is proposed for dealing with multimodal cancer data. The performance of the proposed methods is tested with data from publicly available domains and the results show that the higher order neural networks with glowworm swarm optimization performs better than conventional neural network.

Higher order neural networks are successfully applied in many applications [3,10]. PSNN architecture is a higher order neural network developed by Shin and Ghosh [7]. It is a feed forward neural network with single hidden layer. The output layer has the product unit which calculates the summation and passes onto the activation function. This activation function should be able to handle nonlinear data. Shin and Ghosh defined PSNN as a neural network where polynomial of input variables is formed by a product (“pi”) of several weighted linear combinations (“sigma”) of input variables (Figure 1). 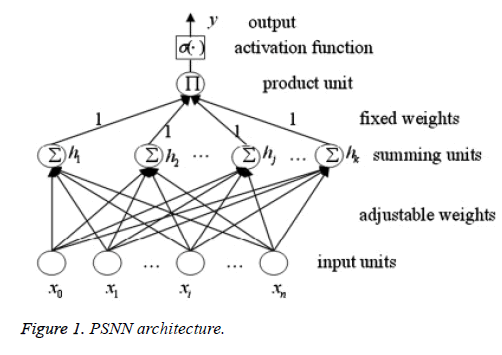 PSNN has good learning rates, low computational complexity and need less memory compared to other neural networks [10]. Also their accuracy is fairly good. The output of PSNN can be calculated as,

where β is the nonlinear activation function, Wkj and Wj are adjustable weights, Xk is the input data, N is the number of input, and K is the number of summation units which reflects the network order. When we add summing units network order increases by 1. Here the weights from summing layer to the output layer are fixed to unity. Hence learning rate and tunable weight values are greatly reduced. Summation units use linear function for more accurate training. Output layer utilizes sigmoid functions.

Artificial neural networks have been successfully used in variety of applications and it is an important tool in pattern recognition and nonlinear data processing. Traditional methods like Multilayer perceptron’s (MLP), radial basis functions (RBF) are widely used but the computational cost is very high. The presence of hidden layer increases the cost of computation in these methods. To reduce the computation cost FLANN [8] is proposed with no hidden layer. Since the hidden layer is removed the computational complexity is reduced and the speed of convergence is increased (Figure 2). 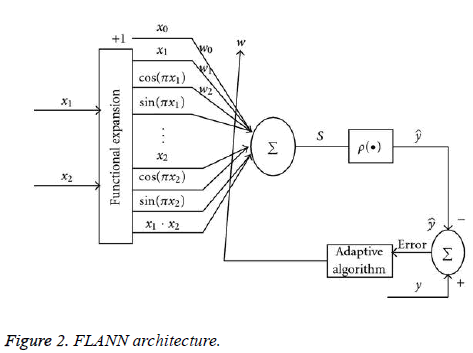 For functional based neural network models, the output was calculated as follows:

Output error is calculated as

The weight matrixes are updated next using the following relationship:

where k is the time index and S is the momentum parameter.

GSO is a swarm intelligence optimization algorithm based on the behavior of glowworms [2]. It is based on the idea of glowworms changing intensity of luciferin emission and thus glows at different levels. In GSO a group of glowworms are distributed across search space. Luciferin is a luminescence quantity carried by the glowworms. Higher value of luciferin represents higher fitness value and better is its current location. A glowworm is attracted by its brightest neighbor within its domain. In each iteration, position of glowworms and their luciferin value changes [2]. GSO algorithm has two steps namely luciferin-update and movement phase. In luciferin – update phase the position of glowworms and value of the objective function at a time is taken into account. Here two constant values called luciferin decay constant and luciferin enhancement constant are set for calculating the luciferin value of a glowworm. That is, if position of glowworm at time t is xi(t), and its corresponding value of the objective function at glowworm i’s location at time t is J(xi(t)). The luciferin level associated with glowworm i at time is given by eq (6)

The position of glowworm i is updated using eq (9)

Where st is the step size. Then the range of neighborhood range is updated using eq (10).

where β is a constant parameter and nt is a parameter used to control the number of neighbors . Glowworms move only in direction of line of sight of its neighbors.

In the proposed approach, the FLANN and PSNN architecture is transformed into objective functions. The weight and bias values of the higher order neural network are fed into the GSO algorithm for finding the optimal weight parameters. The weights are tuned by the GSO algorithm based on error values. The weight set of PSNN and FLANN and the RMSE is calculated by training the network with the multimodal cancer dataset. Then the fitness of weight set w is computed from the sum of the root mean square error obtained from each instance of the dataset as 1/RMSE. The root mean square error (RMSE) is given as,

Where yt are the predicted values for n different predictions for t times. The error function can be calculated as,

where Oj(t) represents the final desired output at time (t-1). At each time (t-1), the output of Yj(t) is calculated. The process continues until maximum number of iterations is reached or stopping criterion is reached.

Based on the GSO algorithm, each glowworm represents the solutions with a particular set of weight vector. The GSO algorithm [2] used for training the PSNN/FLNN is summarized as follow:

Calculate the luciferin value of the glowworms L using eq. (6).

Position of the glowworm is updated using eq. (9)

Step-5: Glowworms are ranked by their fitness and find the best one.

Step-6: If stopping criteria is reached, then go to step-7. Else go to step-4.

7. The weight changes and updating of weight values by using the PSNN/FLANN-GSO algorithm can be computed by,

8. IF the stopping criteria like training error or maximum no. of epochs are satisfied, then Stop.

The proposed technique is implemented using MATLAB on a system having the configuration of 256 G RAM and 2.8 GHz Intel i- 5 processor. A 256 GB RAM was preferred for doubling up the SSD storage which can be utilized if the proposed method is extended for online streaming based medical applications. Here a comparative analysis has been done between PSNN, PSNN-GSO with FLANN, FLANNGSO. 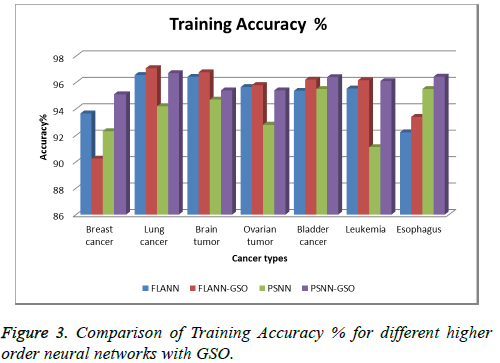 Comparison of computational cost for both PSNN and FLANN with and without GSO is done. Results show a decrease in cost values when classification in higher order networks is done with optimization techniques (Tables 3 and 4 and Figures 4 and 5). 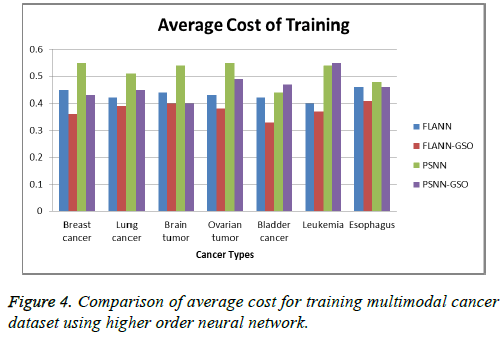 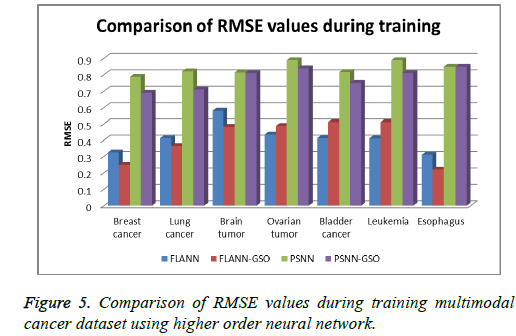