It has been shown that low grade inflammatory state is associated with cardiovascular risk. High sensitive C-reactive protein (hs-CRP), a non specific inflammatory marker has been shown to be increased in metabolic syndrome a risk state for the development of cardiovascular disease and type-2 Diabetes mellitus. Obesity is a predisposing condition to metabolic syndrome. Therefore, this study was intended to measure hs-CRP levels in obese females to assess their risk status. 55 healthy adult obese females with BMI>23kg/m2 were taken as cases and 55 age matched healthy adult non-obese females with BMI<23kg/m2 were taken as controls. Anthropometric measurements (Waist circumference, Hip circumference & Waist to Hip ratio) and biochemical estimations (blood glucose, high sensitive C - reactive protein & lipid profile) were carried out. There was significant increase in Waist circumference, fasting blood sugar, Total cholesterol, Triglyceride, VLDL, LDL levels and hs-CRP levels in obese females as compared to controls. Blood glucose levels & lipid profile were within the reference range in both obese and non obese females. hs-CRP did not show any correlation with blood glucose or lipid profile. hs-CRP behaved as an independent inflammatory marker in obesity. Therefore, hs-CRP might be an early novel marker of inflammation, for identifying the obese females who are at risk for obesity related co-morbidities.

Obesity is a chronic disorder prevalent in both developed and developing countries. It has been found that, in India 55% of women between the age group of 20 and 69 years are overweight [1]. Obesity is one of most significant contributors to morbid conditions like metabolic syndrome, type-2 Diabetes mellitus and cardiovascular disorders (CVD) [1]. It has been shown that proinflammatory molecules contribute to the development of complications in obesity [2]. hs-CRP a non specific inflammatory marker is synthesized by liver in response to stimulation by proinflammatory cytokines derived from several sources including adipocytes [4]. It is seen that hs-CRP is increased in metabolic syndrome, a risk state for the development of cardiovascular disease and type-2 Diabetes mellitus. Therefore, this study was intended to measure hs-CRP levels in healthy obese females who are at risk for metabolic syndrome. Also, there are very limited studies on the role of hs-CRP in female obese individuals.

The study was conducted on patients attending the Endocrinology Department at M S Ramaiah Medical College, Bangalore in South India. The study was conducted after taking the required Ethical clearance from the Institute and all women who signed the informed consent participated in the study. Two groups of normotensive, normoglycemic adult females of the age group 20-70yrs were selected. Group-I as cases comprised of 55 women with BMI>23kg/m2 and Group II - 55 non-obese women as controls with BMI<23 kg/m2 as per WHO standards for Asians [9].Women aged between 20-70 years were included. Subjects with history of diabetes mellitus, endocrinal disorders, smoking, hypertension, cardiac diseases, bronchial asthma, acute or chronic inflammatory diseases, autoimmune diseases, on medications like steroids, antipsychotic drugs, women with menstrual disorders, PCOD & all known parameters that may affect CRP or lipid profile were excluded from the study. Weight, Height, Waist circumference & Hip circumference; BMI (body weight in Kg/height in m2) and Waist to hip ratio (WHR) were calculated were recorded in non-obese and obese group.

Values were expressed as Mean ± SD. Statistical comparisons were carried out by student‘t’ test and ANOVA tests. Correlations were done by calculating Pearson’s correlation coefficient. All statistical analysis were done at 5% level of significance using SPSS software, version 16. 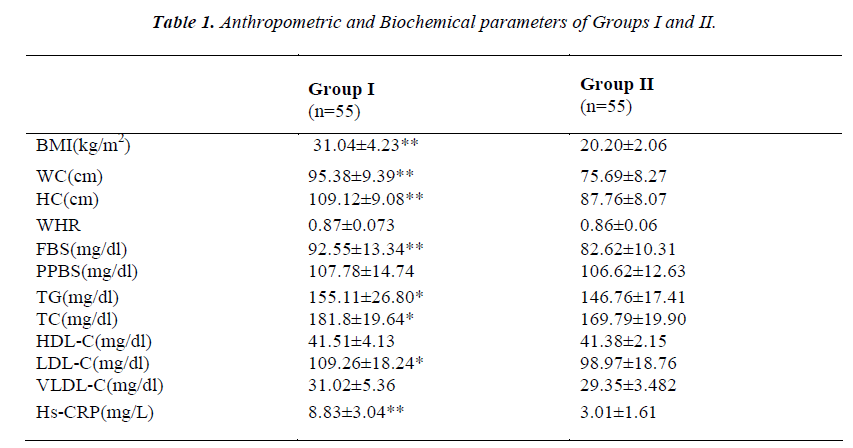 Table 1: Anthropometric and Biochemical parameters of Groups I and II. 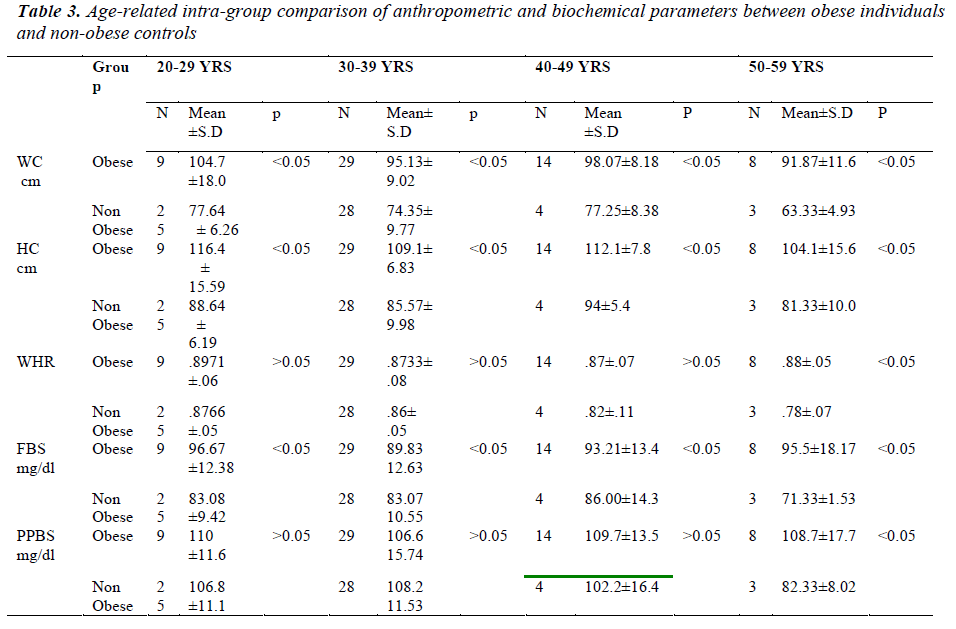 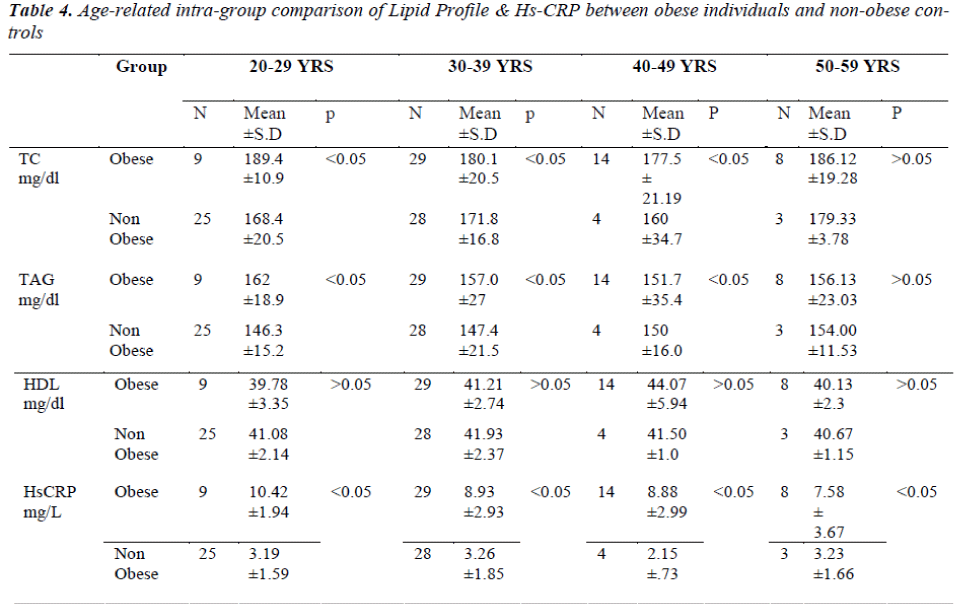 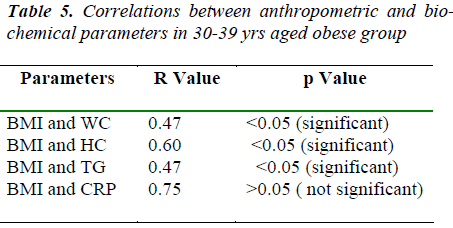 In obesity, there is altered glucose metabolism, which may be due to significant reduction in the insulin sensitivity [20].The fasting and postprandial blood sugar levels were within normal limits in obese. However fasting blood sugar levels higher in obese persons when compared to non-obese controls shows that obese are predisposed to develop metabolic syndrome. The lipid profile, which included Total Cholesterol, triacylglycerol, HDLC, LDL and VLDL, were within normal limits showing that obese subjects in this study were not dyslipidemic. However, Total Cholesterol, triacylglycerol, LDL and VLDL were increased in obese compared to non-obese. This shows that obese individuals with higher BMI tend to have altered lipid profile levels.

Though, the FBS, PPBS, lipid profile & hs-CRP were increased in obese females, there was no positive correlation between hs-CRP and other biochemical parameters. Therefore, hs-CRP behaves as an independent marker in obese females. It can also be noted that all biochemical parameters of this study are with in the reference ranges and only hs-CRP being increased i.e. even before dyslipidemia & insulin resistance sets in, there is an onset of inflammation which can be identified by the measurement of hs-CRP.

Thus hs-CRP can be an early novel inflammatory marker in the healthy obese females. Interventional measures like change in nutritional habits and increase in physical activity in order to lose weight and improve insulin sensitivity also reduce hs-CRP levels [22]. Thus, hs-CRP can also be used as a tool for assess the prognosis in obese females also.

Major limitation of this study is that, this is a cross sectional study with small sample size. Therefore a. prospective study is required to stratify the risk category among obese. Moreover study of pro-inflammatory molecules like adipokines- TNF-a, leptin & resistin in overweight and obese subjects along with hs-CRP may help to elucidate the role of inflammation in obesity.

The present study suggests that obesity is associated with pro-inflammatory changes as evident by increase in hs- CRP levels in apparently healthy obese women. Thus, in normal, healthy, obese individuals the CRP levels can be used as a non specific marker for inflammatory processes and an independent marker of cardiovascular disease, type 2 diabetes and metabolic syndrome.

We are thankful to Dr Vasudha K.C and my colleagues in the department for their help, support and co-operation during this research work. I am extremely thankful for the statistical analysis done by Mr. Shivakumar, MSRMC, Bangalore.