Heterotopic Calcification: A cause for Zygomatico-coronoid Ankylosis

Zygomatico coronoid ankylosis is a rare type of extra articular ankylosis. The most common cause is Jacobs Disease, which is due to osteochondroma of the coronoid process. In this pa-per we present a case where in the zygomatico-coronoid ankylosis is due to heterotopic ossi-fication, secondary to surgical trauma from previous operations. A literature search does not show any similar reported case. Brief review of possible prophylactic modalities for het-erotopic ossification is discussed.

Temporo-mandibular joint ankylosis was classified into two types, intra articular or true ankylosis, and extra ar-ticular or false ankylosis. Fibrous or bony adhesion be-tween the coronoid process and the zygomatic arch is a rare cause of extra-capsular/extra-articular ankylosis. It may follow facial fractures caused by gunshots, treated and untreated fractures of the zygomatic complex with or without concomitant fracture of the coronoid process, chemical burns, mandibular fractures, infections involving the infratemporal space, local surgical complications, ex-tension of intracapsular ankylosis and due to the enlarge-ment of the coronoid process.

The mechanisms by which the ankylosis between the zy-goma and the coronoid develops are unclear, since het-erotopic bone is rarely encountered in the maxillofacial region. It may result from metaplastic changes in connec-tive tissue elements that do not ordinarily have osteogenic potential, following trauma, infection or surgery.

A 52-year-old female was referred to our unit with a his-tory of difficulty in opening the mouth. The patient had a history of fall when she was around four years old. She also had history of two previous surgeries for TMJ anky-losis of the left joint. In both instance the patient had only partial improvement of mouth opening immediately after surgery which reduced to preoperative levels within few months. Clinical examination showed slight asymmetry of the face with mouth opening of 5 mm (Figure 1). Intraoral examination showed a stable occlusion, few missing teeth and no further abnormalities. 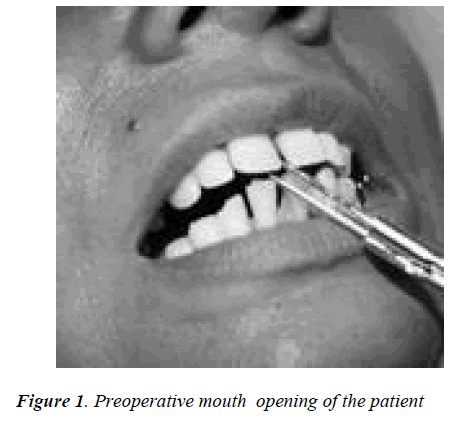 Orthopantomograph revealed probable re-ankylosis of the left joint, also a radio-opaque mass was noticed over the left zygoma. The left coronoid process was enlarged, de-formed and in continuation with the bony mass over left zygoma (Figure 2). A computed tomography scan showed an irregular bony outgrowth from the superior portion of the left coronoid process which was irregular in outline with a homogeneous bony texture. The coronoid process ex-tended high up into the left infratemporal fossa and im-pinged/united with the temporal surface of the zygoma which also showed bone formation on its lateral aspect. On careful examination of the C T scan, two islands of bone, one big and one small were seen in between the zygoma and the coronoid process which were fused to these bones (Figure 3a, 3b, 3c). It was felt that the zygo-matico-coronoid fusion was completed by these islands of bones. The other finding on C.T was malformed left con-dyle, ankylosed on to the periphery of glenoid fossa espe-cially on the lateral aspect. With the patient under general anesthesia after awake fiber optic nasoendotracheal intub-ation, the bony mass was exposed through a modified Al- Kayat/Bramley incision [3]. It was evident that the en-larged coronoid had fused with the mushroom-shaped bone over the zygoma (Figure 4a). 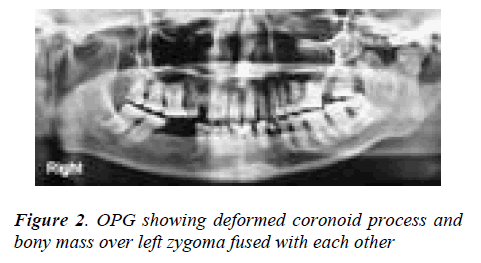 Figure 2: OPG showing deformed coronoid process and bony mass over left zygoma fused with each other. 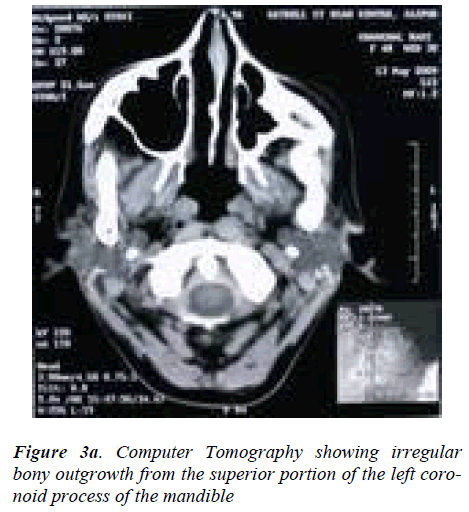 Figure 3a: Computer Tomography showing irregular bony outgrowth from the superior portion of the left coro-noid process of the mandible. 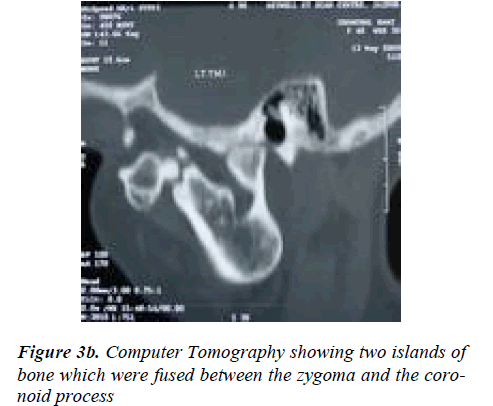 Figure 3b: Computer Tomography showing two islands of bone which were fused between the zygoma and the coro-noid process. 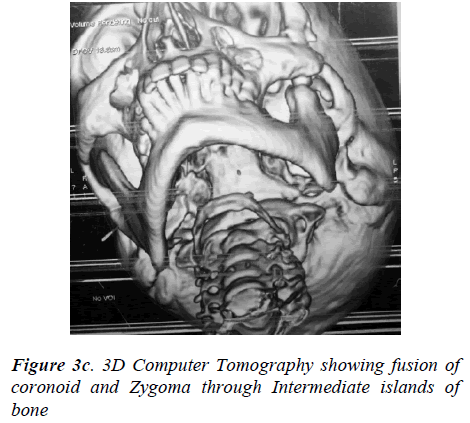 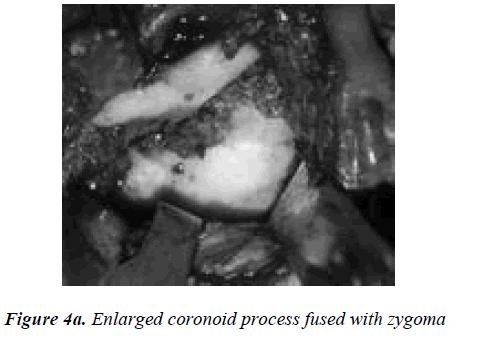 The temporomandibular joint was also affected. A fissure bur was used to separate the left coronoid process from the ramus. Further separation of the coronoid process from the inner aspect of the zygoma was achieved by means of bur and osteotome. Coronoid process and the fibro-osseous mass were then removed in one piece. A 1.5 cm gap was also created between the left condyle and the glenoid fossa. Contralateral coronoidectomy was done to achive a mouth opening of 39mm (Figure 4b). The patient was started on physiotherapy the first day after surgery and was discharged with an interincisal opening of 36 mm after five days. In the first month, the inter incisal opening was stable around 35 mm, but the mouth opening in-creased to 37 mm at 8 weeks after surgery. The overall histopathological picture of the excised bone was sugges-tive of hypertrophy of bone. 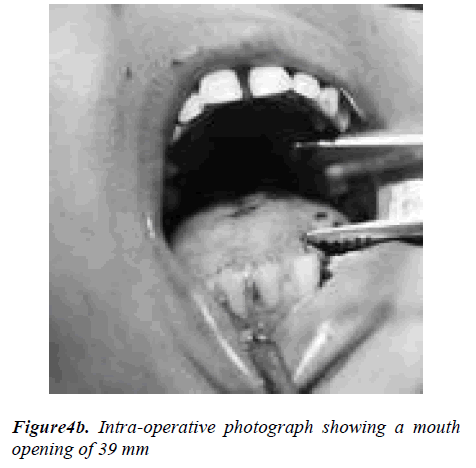 Figure 4b: Intra-operative photograph showing a mouth opening of 39 mm.

The most common cause for zygomatico-coronoid anky-losis reported in the literature is Jacob’s disease, which is osteochondroma of the coronoid process that leads to the formation of a pseudo joint and sometimes fusion between the zygoma and the coronoid process. History of two pre-vious surgeries of the area, radiographic presence of sepa-rate islands of bone between the zygoma and coronoid process and histopathologic examination ruling out osteo-chondroma leads to heterotopic ossification as the prob-able cause of ankylosis in our case. Heterotopic ossifica-tion (HO) is defined as the process by which trabecular bone forms outside of the skeletal structure, occupying space in soft tissue where it does not normally exist. Fur-thermore, though the new bone often abuts existing skele-tal structure, it does not interfere with the configuration of the periosteum [4].

The heterotopic ossification (HO) of muscles, ligaments and tendons is a potential complication following trauma, elective surgery, neurological injury and severe burns. The etiology of HO can be divided into neurological, ge-netic and traumatic. Though the etiology has been classi-fied, the exact pathophysiology of HO remains unknown. Prostaglandin activity, specifically PGE-2, as well as hy-percalcemia, tissue hypoxia, alterations in sympathetic nerve activity, prolonged immobilization and imbalances between parathyroid hormone activity and calcitonin have all been shown to contribute to HO formation [5]. These factors lead to the improper differentiation of pluripotent mesenchymal stem cells into osteoblastic precursors. HO characterized by inflammation and cell death can result in local alterations in pH and matrix that promote the deposi-tion of calcium in the form of hydroxyapatite crystals. Growth factors such as BMPs stimulate mineralization and bone formation via their effects on osteoblast progeni-tor cells.

Indomethacin and meloxicam works by inhibiting pros-taglandin-mediated (specifically PGE-2) bone remodeling and also by directly inhibiting the differentiation of osteo-progenitor cells [6]. Studies by Cooley and Goss [7] in 1958 and later those by Craven and Urist [8] in 1971 demonstrated the effects of irradiation therapy on bone growth and repair. A dose of 7-15gy is used for the pre-vention of HO following bone fracture or manipulation secondary to trauma or operative treatment. Combination of NSAIDs and RT has also been used.

It is possible that the overexpression of certain bone mor-phogenetic proteins (BMPs) may have an influence on the formation of ectopic bone. Current research suggests that local and some forms of systemic delivery of Noggin, an extracellular peptide that binds and antagonizes BMPs is effective in combating formation of heterotopic bone in animal models [9].

Based on the assumption that local hypoxia has a role in the development of HO, a study by Kociæ et al [10] has suggested that the use of pulsed electromagnetic fields (PEMF) could prevent HO by increasing the rate of circu-lation and oxygenation of soft tissue surrounding a trau-matic or surgical site.

Oxidative stress occurs when the production of free radi-cals are created at a faster rate than that at which they are eliminated [4]. Large quantities of free radicals are pro-duced both as a result of the ischemia/reperfusion syn-drome and the so-called disuse phenomenon. The ische-mia/reperfusion syndrome is a result of isometric muscle contractions (secondary to muscle hypertonia and contrac-tures) effectively occluding the muscle's arterial supply and inducing a state of ischemia. Drawing on the theory of the involvement of hypoxia in the pathophysiology of HO, studies have examined the use of allopurinol and N-acetylcysteine (A/A) as free radical scavengers to prevent ectopic bone formation.

The uniqueness of our case is that the fusion between co-ronoid and zygoma is by separate islands of bone which could be a result of heterotopic ossification secondary to surgical trauma of previous surgeries. A literature search did not show any previously reported similar case. Not much consideration is given for HO in maxillofacial re-gion; hence it can easily get ignored. We should keep it as possible outcome of surgical trauma and prophylactic measures should be taken in special circumstances.