Introduction: Sudden cardiac death has a tendency to increase among elite athletes. It has been reported that endurance exercise increased serum concentrations of cardiac biomarkers in elite athletes although it is unclear whether is clinically significant or is a part of the physiological response. Lately, the theory of myocardial stunning is attractive since there is no permanent cellular damage and is transient nature. This prompts us to evaluate the significance of Hsp27 and GP-BB as sensitive and specific biomarkers of myocardial stunning in elite male water polo players.

Materials and Methods: A prospective and experimental study included 20 elite male water polo players, randomly divided into two groups that matched for age, length of active practicing water polo and level of physical stamina. Blood samples for testing were obtained at the following time points: baseline, 1, 30 and 60 min following exercise as well as for control group.

Conclusion: Serum concentration of Hsp27 could be important indicator of the risk assessment and prevention of developing heart damage in water polo players or for athletes in general. Positive correlation between Hsp27 and GP-BB indicating the reversibility damages of structural and contractile proteins in myocardial cells. Further investigation is needed to investigate connection to oxidative stress as a significant part of metabolic exhaustion of myocardial cells.

Endurance exercise is associated with transient elevations of heat shock proteins (Hsp) expression, body temperature, hormones, and oxidative stress [1]. The effect of prolonged exercise on cardiac muscle integrity and function is less well known [2]. At present, the risk of myocardial damage by endurance exercise is under debate because of reports on exercise-associated increases in cardiac biomarkers which are typically elevated in patients with acute myocardial infarction and chronic heart failure [3]. Emerging evidence suggests that prolonged exercise may be associated with cardiac fatigue or cardiac damage, although the clinical implications remain obscure [4]. So, the theory of stunning is attractive on the basis that it does not result in necrosis and permanent cellular damage and is transient in nature [2].

Hsp play critical roles in body self-defence under a variety of stresses, including endurance exercise, through regulation of folding and functions of relevant cellular proteins [5]. These ubiquitous and conserved proteins can be found inside and outside the cell [6]. Although initially characterized as intracellular chaperones, subsequent studies pointed to the presence of Hsp in the extracellular space [7,8]. Extracellular Hsp have consequently been ascribed novel functions (such as outside-in signalling), expanding their canonical role of maintaining homeostasis in the cell to that of the whole organism [9].

Hsp27 is a member of a small Hsp family, 27 kDa molecular weight, highly specific for cardiovascular cells such as cardiomyocytes and endothelial cells [10]. Intracellular Hsp27 maintains cellular homeostasis through involvement in cytoskeletal architecture and dynamics [11,12]. So, it has been demonstrated that over-expression of Hsp27 can protect the integrity of the microtubules and the actin cytoskeleton in cardiac myocytes and endothelial cells exposed to ischemia [13,14]. Also, Hsp27 can be secreted outside the cell and can be found in a soluble form in the circulation. Its extracellular concentration is proportional to its intracellular concentration [15]. Recently indicated that extracellular concentration of Hsp27 are implicate in the regeneration of endothelial barrier [16]. According to literature Hsp27 is a part of protective mechanism through its over-expression even in the absence of other protective procedures [17].

Endurance exercise is associated with transient cellular damage of cardiomyocytes as we mentioned before. Our assumption is that this is a metabolic exhaustion of myocardial cells. In recent years, special attention has been drawn to glycogen phosphorylase isoenzyme BB (GP-BB) as a specific serum marker of myocardial ischemia [18]. GP-BB is released from cardiac cells during myocyte damage [19]. Moreover, human studies suggest a higher sensitivity of GP-BB compared to other cardiac markers. GP-BB is not dependent on cellular death and necrosis for release, and thus is a true marker of ischemia [20].

Subject of our interest is water polo sport as the oldest continuous Olympic team sport. Water polo is a physically demanding sport; action is continuous, and players commonly swim three kilometres or more during four periods of play [21-23]. Water polo is a sport involving extremely intense exercise training that might be expected to result in major cardiac adaptations. Therefore, in this study we examined if this extremely strenuous sport was hazardous to cardiovascular health of young male water polo players. 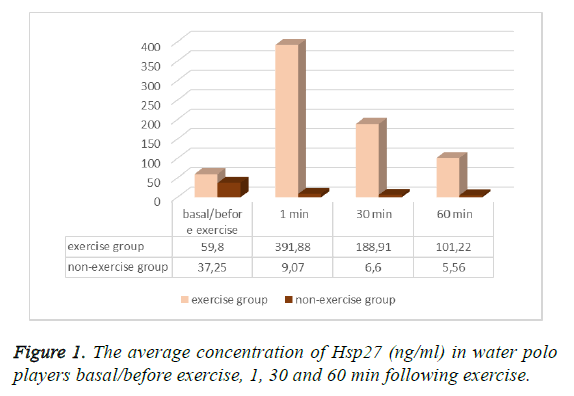 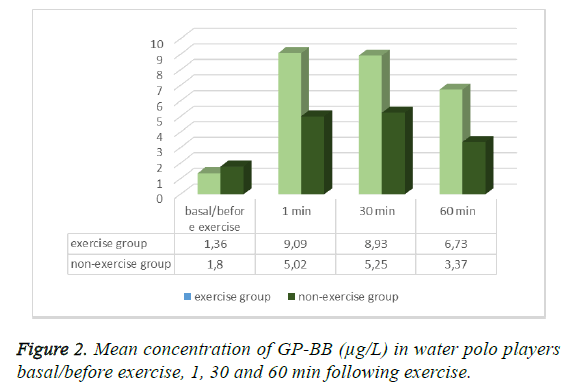 Although serum concentration of GP-BB were higher in exercise compare to non-exercise group, statistically significant difference were only for concentrations obtained for 60 min following exercise (t=2.677; p<0.025).

Mutual these two groups of analysed water polo players did not differ in mean value of diastolic and systolic blood pressure as well as heart rate frequency basal/before training.

The question whether endurance exercise is associated with structural or functional damage of the human heart is of utmost importance for physicians involved in the medical care and guidance of endurance athletes. If myocardial damage occurs with prolonged exercise, this would result in the release of myocardial cellular proteins into the general circulation, where it can be detected [24]. Recent studies, particularly emphasize the importance of the process labelled as myocardial stunning caused by ischemia or coronary vasospasm [25] which is transient in nature and does not result in necrosis and permanent cellular damage [2].

It is now well established that prolonged exercise results in an increase in expression of stress proteins in many organs including cardiac muscle [25]. Intensive and regular exercise results in increased basal Hsp concentration which is directly dependent on the intensity, duration and type of exercise. The increase in basal Hsp concentration suggests that this protective system is functional in maintaining cytoskeletal structures, redox potential and accelerating the biogenesis of mitochondria [26]. According to the literature all analysed water polo players had increased serum concentrations of Hsp27 basal/before exercise as a part of preconditioning through regular training program.

Importantly, evidence also exists to suggest that exercise induction of stress proteins can provide myocardial protection [27]. So, Hsp27 has been shown to occur in relatively high concentrations in heart tissue [25,26] as intracellular protein. Also, the presence of Hsp27 has been detected in human serum, with elevations observed after extreme exercise [28,29]. Secretion of Hsp27 from cells can occur independent of cell death due to increased permeability of cell membranes [30]. Indeed, immediately after exercise obtained significantly increase serum concentrations of Hsp27 in water polo players in comparison to the concentrations before exercise.

Strenuous exercise consists of aerobic and anaerobic phases and that including lactate and lactate phases. This means that induces intense metabolic stress of myocardial cells. Osbakken and Locko employed stress-redistributed thallium scans and reported possible evidence of myocardial perfusion defects in trained athletes after 40 ± 7 min of fatigue limited sub maximal bicycle exercise [34]. This perfusion defects are the basis for the generation of minimal myocardial damage or disruption of endothelial barrier. Our results indicate this myocardial damage through increasing GP-BB concentrations at the first minute following exercise as a marker of early ischemia or vasospasm. Transient nature of this damages or vasospasm is confirmed by decreasing its concentration in 30 and 60 min after finishing strenuous exercise. Meanwhile, increased serum concentration of Hsp27 immediately after exercise point on disrupted endothelial barrier. In the next 30 and 60 min, the concentration is reduced in order to restore the functional endothelial barrier. Additionally, serum concentrations of Hsp27 as cardioprotective marker significantly positively correlated between the measurement intervals. Moreover, serum concentration of Hsp27 as cardioprotective marker and GP-BB as an early marker of ischemia were in significant positive correlation 1 and 30 min following training.

Concerning the structure of water polo players motion during game, 35% of overall time the players is in quasi-horizontal phase (all swimming at all levels of intensity during game), whereas the remaining 65% of the time in quasi-vertical phase (vertical position achieved by leg work known as water polo cycling) [35]. Myocardial blood flow is stopped or greatly reduced during systole based on contractile force so that during exercise coronary perfusion in diastole increases due to a dramatically increased intravascular pressure [36]. So, endurance exercise induced significantly higher values of SBP, DBP and HR in water polo players immediately after, more precisely in the first minute. GP-BB concentrations were in significant negative correlation to SBP in 1 and 30 min after exercise, in period of existing myocardial perfusion defects. Concurrently, Hsp27 is a powerful cytoprotective protein responsible for maintaining myocardial cytoskeletal conformation and cellular homeostasis, thereby enhancing cell survival ability in ischemia [27]. In the absence of hypoxia, they act as molecular chaperons with a significant role in normal myocardial cell function. So, in the period of recovery and establishment of normal coronary perfusion following strenuous exercise, 30 and 60 min, Hsp27 concentration were in significant negative correlation only to SBP.

In summary, serum Hsp27 could be important indicators of the risk assessment and prevention of developing heart damage in water polo players or for athletes in general. Positive correlation between Hsp27 and GP-BB indicating the reversibility damages of structural and contractile proteins in myocardial cells. Further investigations are needed to investigate connection to oxidative stress as a significant part of metabolic excretion of myocardial cells.