Physical inactivity is a serious growing health problem. Epidemiological studies have shown that a sedentary lifestyle will contribute to the early onset and progression of atherosclerotic cardiovascular disease and is associated with a doubling of the risk of premature death. Exercise favorably affects lipoprotein metabolism. The protective effect of exercise is by increasing circulating HDL. Hence there is a need to study the effect of exercise on the levels of High Density Lipoprotein (HDL), Apolipoprotein A-I (apo A-I) and Lecithin cholesterol acyl transferase (LCAT) activity. A total of 100 subjects were studied, aged 30-50 years. Group I consisted of 50 athletes who were involved in regular physical exercise. Group II consisted of 50 age and sex matched healthy controls with sedentary life style. LCAT activity was assessed by measuring the difference between esterified and free cholesterol by using digitonin precipitation method. Apolipoprotein A-I was measured by immunoturbidemetric method using semiautoanalyzer. Total cholesterol and HDL cholesterol were measured by CHOD-POD method. Triglyceride was measured by GPO-PAP method. LDL and VLDL were calculated by formula. The levels of TC, TC / HDL and LDL / HDL were significantly increased in Group II in comparison with Group I. The levels of HDL, LCAT and Apolipoprotein A-I were significantly increased in Group I compared to Group II. Individuals engaged in regular physical activity had higher HDL, LCAT activity and Apolipoprotein A-I levels and lowered levels of atherogenic lipid components. This might help in preventing cardiovascular disease development in these individuals.

Physical inactivity is a serious growing health problem associated with the risk of premature death by atherosclerosis and cardiovascular disorders [1-4]. Physical exercise and fitness are considered as key factors affecting overall risk of cardiovascular disease. It is an effective intervention for prevention and treatment of coronary artery disease (CAD) as well as for rehabilitation of coronary patients [5,6]. Regular physical activity as well as a single exercise session can positively alter cholesterol metabolism by increasing the production and action of several enzymes which enhance the reverse cholesterol transport. The precise mechanisms are unclear, but evidence indicates that other factors including diet, body fat, weight loss, hormone and enzyme activity interact with exercise to alter the rates of synthesis, transport and clearance of cholesterol from the blood [7]. Exercise favorably affects a number of cardiovascular risk factors such as obesity, insulin resistance, and blood pressure. It also has a beneficial effect on the lipid profile. The latter may be a significant contributor to the protective effect of exercise partly by lowering the concentrations of triglyceride-rich lipoprotein (TRL) and low-density lipoprotein (LDL), especially atherogenic small LDL. However, the most distinct and sustained effect of exercise on lipoproteins is the increase in circulating HDL, both as HDL cholesterol concentration and the number of HDL particles [8-10]. LCAT is the enzyme that generates almost all of the cholesterol esters in plasma and plays a key role in reverse cholesterol transport and is activated by Apolipoprotein A-I [11]. It promotes reverse cholesterol transport by maintaining a free cholesterol gradient between HDL and peripheral tissues [12].

Thus there is need to study the effect of physical activity on HDL Cholesterol, LCAT and apo A-I levels.

A total of 100 subjects were studied, aged 30-50 years. Group I consisted of 50 athletes who were selected from the military training academy. They were involved in regular exercise amounting for expenditure of approximately 5 kilo calories/ min for 2hours/day for a period of one year. Group II consisted of 50 age and sex matched healthy controls, with sedentary life style. Athletes were tested during the “off season” period, i.e., at ≥ 2 months after or before training period. The amount of exercise during this period was relatively low, aiming to sustain rather than increase physical fitness. Neither athletes nor controls had exercised for at least 24 hours before the tests. The study was conducted in the Department of Biochemistry, BIMS, Belgaum. All the participants belonged to the middle income group. All the experiments have been examined and approved by institutional ethical committee and with the Helsinki Declaration of 1975, as revised in 2000.

After obtaining informed written consent, 5ml of overnight fasting blood sample was collected from all the participants under aseptic conditions. The blood samples were centrifuged and serum samples were used for measuring various parameters.

The LCAT activity was indirectly measured as the difference between esterified cholesterol and free cholesterol.

The effect of physical exercise on plasma HDL levels has been demonstrated in a number of interventional studies. The present study aimed at determining whether exercise could induce an increase in HDL cholesterol levels and also to know the mechanism behind increase in HDL cholesterol levels. The major finding of the study was that physical exercise was associated with increments in plasma concentrations of HDL cholesterol. Higher levels of HDL Cholesterol in those involved in regular exercise was an expected finding and was consistent with other cross-sectional and interventional studies.

In our study we found that the levels of TC, TG, LDL and VLDL were significantly lower in athletes compared to controls (Table 1). The levels of HDL, LCAT activity and apo A-I were significantly higher in athletes compared to controls (Table 1). Study by Beata Olchawa et al (2004) showed that higher levels of HDL Cholesterol in athletes might be a consequence of increased formation of HDL from apo-A-I and cellular cholesterol, enhanced flow of cholesterol along the RCT pathway, and hence increased functionality of RCT [16].

Study by Halle.M showed that increase in physical fitness improved the lipoprotein profile and reduced the incidence of cardiovascular events [17].

Our data and those from other studies indicate that changes in lipoproteins, particularly an increase in HDL, can be achieved with regular exercise. This is important in the prevention of coronary heart disease. Epidemiologic studies suggest that a high HDL may protect against coronary heart disease. Although there is no definitive metabolic evidence as to why a high HDL protects against atherosclerosis, possible mechanisms have been suggested. A possible benefit of a high HDL level follows from the role of HDL as a carrier of free cholesterol removed from tissues, with esterification of this cholesterol under the action of LCAT. Physical exercise may influence physiological effects that enhance the formation of Apolipoprotein A-I [16] which activates LCAT enzyme [19]; hence there might be increased HDL formation and activity of LCAT. This is supported by the positive correlation between LCAT activity and apo A-I (Figure 1), HDL and LCAT activity (Figure 2), HDL and apo A-I (Figure 3) as observed in our study. 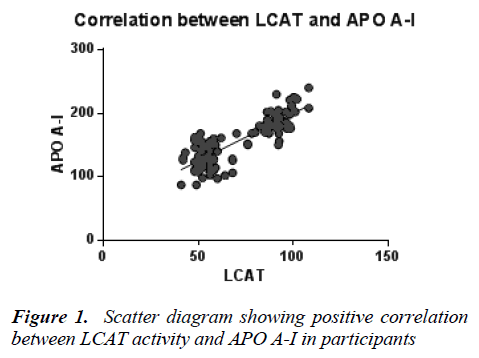 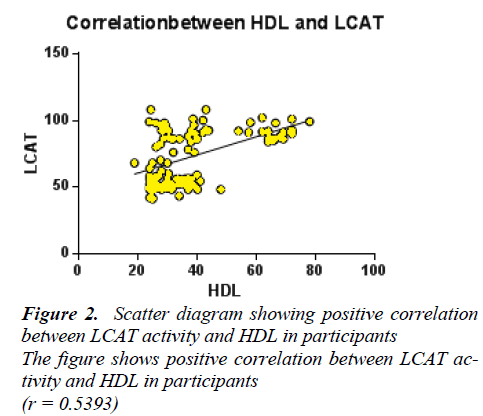 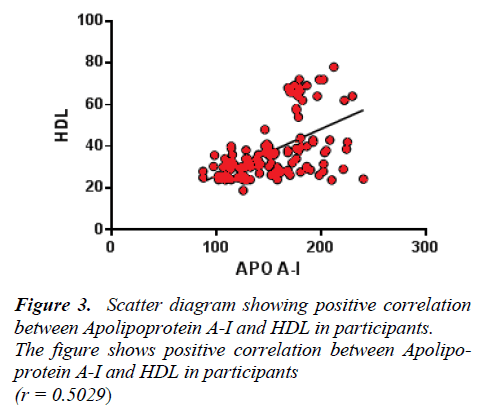 In our study we have found that physical exercise increases LCAT activity, levels of HDL and Apolipoprotein A-I and decreases LDL / HDL ratio and Total Cholesterol / HDL ratio which is considered as the atherogenic index. The raised HDL, LCAT, apo A-I and reduced atherogenic index reduces the incidence of atherosclerosis in subjects involved in regular physical activity. Thus engaging in regular physical activity which contributes to physical fitness helps to decrease the incidence of cardiovascular diseases by increasing the HDL Cholesterol levels.

Study concluded that individuals engaged in regular physical exercise had higher HDL-C, LCAT activity and Apolipoprotein A-I levels and lowered levels of atherogenic lipid components which might help in preventing cardiovascular disease development in these individuals.