This study was undertaken to verify the efficacies of phytochemical extracts of citrus fruit peels obtained from Citrus sinensis, Citrus reticulata, Citrus limonum, Citrus aurantifolia and Citrus vitis against isolates of tomato rot bacteria. Results of this study provide the much needed less hazardous, cheap and readily available means of controlling or managing bacterial diseases of postharvest tomato fruits to reduce the huge economic losses often incurred by tomato fruits dealers and farmers. Solvent extracts were characterized for presence of constituent active compounds, flavonoids, tannins, terpenes, cardiac glycosides, anthraquinones, saponins and alkaloids. Pseudomonas spp., Klebsiella spp. and Escherichia coli were isolated from rotten tomato fruits using McConkey, Blood and Peptone Sucrose agar media. Isolates were subjected to sensitivity test with 10%, 20%, 30% and 40% concentrations (volume by volume) of the different extracts, respectively. All the concentrations showed different degrees of growth inhibition on the test organisms. The study confirmed that phytochemical extracts from peels of citrus fruits are efficacious against tomato fruit rot bacteria and therefore have a good promise for sustainable control of bacterial rot disease of tomato fruits.

Studies conducted in different parts of the globe have revealed that over 800 million people in developing countries of the world are without adequate food supply, yet more than 10% of the food produced globally is lost due to plant diseases caused by the various plant pathogens such as viruses, bacteria, fungi, nematodes, insect pests, etc. [1]. Recent findings by Shuping and Eloff [2] from their study on the use of plant extracts to protect plants and food against fungal pathogens has confirmed the results of earlier reports (Kavitha and Satish) [3] that the crucial role which phyto-pathogens play in profitability, quality and quantity of crop production is mostly attributable to the ability of phyto-pathogens to evolve evasive and persistent mechanisms with which they evade and resist plant defences and thus cause diseases and quality losses amounting to billions of US dollars annually. The resultant drastic reduction of consumers’ confidence and low profitability are manifestations of plant diseases due to these phyto-pathogens.

Until recently it was thought that organo-chemical pesticides were making positive impact in the control and management of both plant diseases and microbial contaminations in the different agricultural commodities. Unfortunately, it has now been found that the world annual crop harvest is still under serious threat by pests resulting in economic losses to the tune of nearly 300 billion US Dollars annually [4]. Another serious challenge in fruit farming has been the emergence of resistant sibling species of phyto-pathogens, besides the most worrisome hazardous effects of synthetic pesticide applications on the life-sustaining systems by residual toxicity [5,6]. It was the realization of the numerous undesirable attributes of chemical pesticides such as high and acute toxicity, long degradation periods, accumulation in the food chains, non-eco friendliness and pest-resistance, that led to the ban of a large number of synthetic organo-chemical pesticides in some parts of the western world in recent years [7]. It is this ban that spurred the on-going global exploration and exploitation of plants for safe, less toxic, readily biodegradable, ecosystem friendly, readily available and cheap phytochemical alternatives which can be adopted for sustainable control and management of pathogens of crop diseases such as tomato rot bacteria, fungi, etc.

Earlier studies have however, shown that besides being ecofriendly, phytochemical extracts have proved efficacious against many plant pathogens as well as enhancement of plants’ productivity variables [8-15]. Even in the recent study by Abiodun et al., on efficacy of selected plant extracts in the management of tomato early blight disease caused by Alternaria solani, the application of the extracts revealed a significant influence on early blight severity, number of fruits produced, fruit length and fruit weight [16].

It is in reconsideration of these rich antimicrobial efficacies exhibited by plant extracts against food poisoning bacteria besides other potentials that several researchers across the globe are demonstrating various plant products for use against phytopathogens [17].

It is believed that exploitation of naturally available phytochemicals that have shown good promise to retard the activities of these undesirable micro-organisms may be more a realistic and ecologically sustainable method for protecting plants and their produce (fruits and seeds) against diseases [18].

Collection and processing of the citrus fruits species

The species of citrus fruits and the tomato fruits used in this study were obtained from the open markets of Umudike in Ikwuano Local Government Area and Obehie in Ukwa West, Abia State, respectively.

The fruits were first washed in clean water and dried, peeled off as thin as possible. The peels of each species were spread on white cardboard sheets on the laboratory benches and air-dried for three weeks, avoiding contamination in the process. They were then ground into powder using a cleaned and adequately sterilized grinding machine into air-tight containers ready for phytochemical extraction.

Extraction of sterile phytochemicals from the citrus fruits

To extract the volatile oils from the powdered citrus fruit materials, 100 g of the powder was fed into the Soxchlet extractor or apparatus (2 L), and 500 ml of Diethyl Ether was added and mixed. The mixture was heated and the citrus oil exhaustively extracted at a temperature range of between 60-80ºC for six hours. The extract was then left overnight at laboratory temperature (37.8ºC) for the remaining ether in it to evaporate. The procedure was repeated with the different powdered fruit materials prepared from peels, seeds and pulp of Citrus sinensis, Citrus limonum, Citrus aurantifolia, Citrus reticulata and Citrus vitis. The stock extracts were then preserved in an air-tight glass bottles at 4ºC.

Phytochemical screening of the extracts

The extracts were screened for active compounds, alkaloids, flavonoids, saponnins, tannins, etc., using the characterization methods for plant extracts as described by Harbone et al. [19] for alkaloids, phenolics, and tannins and Sofowora for flavonoids [20], Obadoni and Ochuko for saponins, etc [21].

Tomato fruits obtained from the Open Market were washed, put in peptone water and incubated overnight at 37ºC to concentrate the organism(s) if present. Sub culturing was done on McConkey, Blood agar and Peptone Sucrose Agar (PSA, for isolation of Pseudomonas spp.) the next day. The Agar plates were then incubated overnight. Pure isolates were identified as prescribed by Baker 1980 [22] (Figures 1-3). 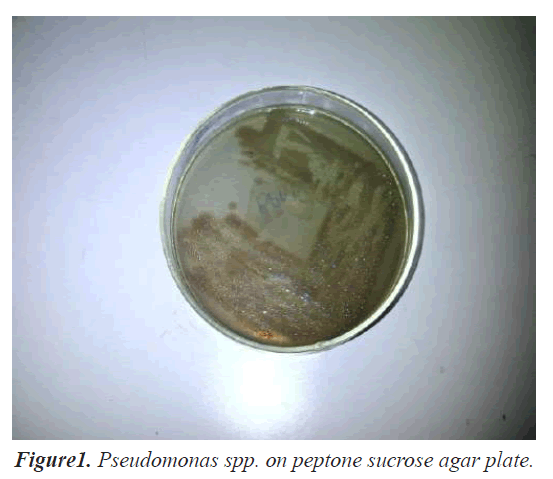 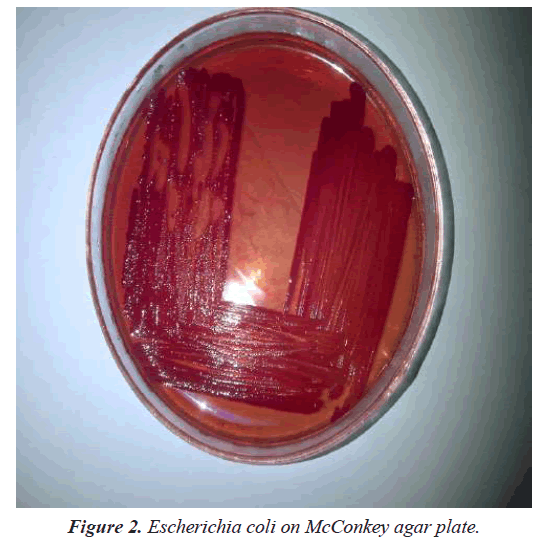 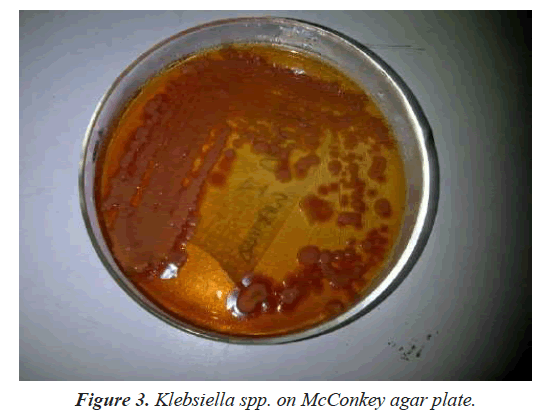 Using the Agar well diffusion method, the activity of each phytochemical extract on the isolated bacteria was determined. Sterile pipettes were used to dispense four different concentrations 10%, 20%, 30% and 40% volume by volume, of each phytochemical extracts into the well made on nutrient Agar plates upon which the organisms have been cultured. The plates were incubated overnight at 37ºC and thereafter observed for zone(s) of inhibition. The diameter of each growth inhibition zone was recorded in mm (Table 1).

The results of the qualitative analysis of the phytochemical extracts from the peels of the different citrus fruit species revealed their respective active constituents. The active compounds commonly detected in almost all the extracts were alkaloids, flavonoids, tannins, while saponins, terpenes and anthraquinones were scanty. Citrus sinensis were rich in alkaloids and flavonoids and less tannins and terpenes, while Citrus limonum had more flavonoids and tannins with alkaloids and terpenes. Similarly, Citrus aurantifolia peels contained more alkaloids and tannins with little flavonoids, cardiac glucosides, terpenes and anthraquinones. Citrus vitis and Citrus reticulata had more of flavonoids and little alkaloids, saponins and tannins. The most common active compound found in the peel extracts of all the citrus fruit species was tannins (Tables 2 and 3).

Table 2: Result of qualitative analysis of the phytochemical extracts.

The result of the sensitivity test against the bacterial isolates showed that peel extracts from the different species of citrus fruits produced varying levels of growth inhibition for the different concentrations. The four concentrations (10%, 20%, 30% and 40%) of the extract from Citrus aurantifolia (lime) tested against Pseudomonas spp. exhibited different diameters of inhibitory zones of 1 mm, 1 mm, 2 mm and 3 mm, respectively.

A test performed with concentrations of Citrus sinensis (sweet orange) peel extracts against the three bacterial isolates was positive for all the organisms tested. The effect of 10% concentration was mild (with a zone of 0.5 mm) against Pseudomonas spp. and Klebsiella spp. but negative against E. coli. Forty percent (40%) concentration of this extract was more efficacious producing inhibitory zones of 2.5 mm, 2.5 mm and 3 mm, against Pseudomonas spp., Klebsiella spp. and E. coli, respectively.

The organisms did not respond to the concentrations of the peel extract from Citrus vitis (grape), except Pseudomonas spp. which produced a zone of 1.5 mm and 2 mm for 30% and 40%, and 0.5 mm each for 40% concentration against Klebsiella and E. coli.

The findings of this study have demonstrated the respective efficacies in growth inhibition of the phytochemical extracts against different bacterial isolates from rotten tomatoes. Extract from Citrus reticulata proved very efficacious even at lower concentrations against Pseudomonas spp., implying that it can be used in the treatment of postharvest tomato fruits against infections by Pseudomonas spp. Similarly, extracts from peels of Citrus limonum exhibited efficacy at small concentrations against Klebsiella spp. and can therefore be used in to prevent postharvest tomato fruits from infections by Klebsiella spp. It was generally observed that the growth inhibitory activity of the phytochemical extracts increases with increased concentration of the extract.

Although Escherichia coli and Klebsiella spp. are not normally associated with tomato fruit rot disease, they may have been found in tomato fruits as a result of contaminated water used for irrigation, or organic manure used as fertilizer or as a result of washing the fruits, poor handling and storage, etc. This observation agrees with earlier findings reported by Falomir et al., which reported that fresh vegetables normally carry non-pathogenic epiphytic microorganisms arising from contamination during growth, harvest, transportation and further poor handling of the produce [29]. It was also stated that most of the reported outbreaks of gastrointestinal disease linked to fresh produce such as tomato fruits have been associated with bacterial contamination, particularly with members of the Enterobacteriaceae family of which Escherichia coli and Klebsiella belong.