Mammalian target of rapamycin (mTOR) plays an important role in regulating protein synthesis. This paper discusses the effects of glutamine and electrical stimulation on protein content and the mTOR pathway in C2C12, providing theories on how glutamine improves sports performance and recovery. After 5 days of differentiation, C2C12 myotubes were incubated in 4 mM or 10 mM doses of glutamine for 48 hours, and then stimulated to contract for 90 mins at 15v, 3Hz, and 30ms. After electrical stimulation, samples of Es and Gln+Es were harvested at 0, 6, 18, and 24 hours. The BCA Protein Assay Kit was used to measure total protein content (μg/ cm2). The expression of mTOR and S6K1 were measured by RT-PCR. The expression of p-S6 and myosin heavy chain (MHC) were measured by western blot. The results showed that total protein content, mTOR, p-S6, MHC expression of Gln were greater than that in Con (P<0.05). Compared with the protein content found in Con, that of Es18 and Es24 increased significantly (P<0.01). When the expression of mTOR and p-S6 were compared, it was apparent that Gln+Es and Es had similar trends, which was a decline in protein followed by a subsequent rise. The difference was that Es reached the peak in 18 hours, while Gln+Es did so in 6 h. The MHC expression in both Es and Gln+Es changed stable with a similar trend, decline followed by rise. Electrical stimulation and glutamine promote expression of MHC through the mTOR pathway, increase protein synthesis, and promote the rise of protein content and muscle recovery.

An impressive 40%-50% of the body consists of skeletal muscles, which have a very important role in maintaining quality of life. Proteins are constantly being synthesized and degraded in these tissues [1], which becomes more complicated when the body is engaged in exercise [2]. Many factors affect this process, including exercise and the nutritional supplementation [3-5]. The influence of exercise on skeletal muscle function has always been a significant topic for discussion in the field of sports medicine research, prompting the need for more studies about different types of exercises. Glutamine is synthesized mainly in skeletal muscle and is the most abundant conditioned essential amino acid [6-9]. When athletes are exercising or training, reasonable supplementation of glutamine is very important for improving motor function. However, the body only requires a limited amount of glutamine. Too much supplementation can cause excessive metabolism, increasing the burden of the liver. At present, the key to supplementing glutamine is the determination of dose under different conditions and at different times. The mTOR pathway is the main metabolic regulator of skeletal muscle protein synthesis. Both appropriate exercise and glutamine supplementation can promote protein synthesis, but the mechanisms of action are still not completely clear. Moreover, there has been very little research into the relationship between glutamine supplementation and the mTOR pathway. Our experimental scheme involved using electrical stimulus (15v, 30ms, 3Hz, 90 min) and glutamine supplementation (10 mM, 48 h), culminating in the detection of the total protein content and expression of mTOR/S6K1 mRNA and p-S6/MHC protein. Consequently, this method researched the effects of electrical stimulation and glutamine supplementation on protein content and the mTOR pathway, as well as provided a theoretical basis for sports injury and recovery.

Total RNA was extracted from C2C12 myotubes using the PrimeScriptTM RT reagent Kit, according to the manufacturer’s instructions. The reaction conditions were 37°C for 15 min, 85°C for 5s, and 4°C for 30 min. The cDNAs corresponding to various genes were amplified using the SYBR premix Ex Taq II and quantified at 95°C for 3 min, followed by 45 cycles of 95°C for 5s, 60°C for 25s, and 72°C for 30s, ending with 72°C for 5 min. mTOR forward was 5'- ATGGCGGATGATCTAAAGCGA -3'; mTOR reverse was 5'- GGCACTGTCGTTAGCCACT -3'. S6K1 forward was 5'- CCATCACACACCACGTCAAG -3'; S6K1 reverse was 5'- TTGCGTACCAGGAAGACTTTG -3'. All samples were analyzed at least three times. The expression of each transcript was measured by the 2-ΔΔCt method, using the threshold cycle (Ct) value. GAPDH transcription was used as an internal control. The amplification of specific transcripts was further confirmed by melting curve analysis.

The presence of p-S6 and MHC proteins in the C2C12 cells after glutamine incubation and electrical stimulation was detected by Western blot. Briefly, cells were washed with cold phosphate buffer saline (PBS) and directly lysed with Laemmli sample buffer. The samples were then run on 6% SDS-PAGE, followed by transfer to a nitrocellulose membrane (Bio-Rad-USA). The membrane was blocked for 1.5h at room temperature with 5% BSA and 0.05% Tween-20 in phosphate buffer saline. Next, the membrane was incubated with anti-MHC (1:1000, proteintech, 10799-1-AP), anti-p-S6K1 (1:2000, CST, 9204S), or anti-β- actin (1:1000, Santa Cruz Biotechnology Inc) overnight at 4°C. The membrane was washed and incubated with rabbit-peroxidase- conjugated secondary antibody at room temperature for 2 h and the immune-reactive bands were visualized using a chemi-luminescence detection system (Imuno-Star, Bio-Rad). Relative band intensity was quantified using Image J software after normalizing with β-actin band intensity.

Our study required differentiated C2C12 myotubes, in order to ensure stability during experimentation. From days 1 to 7, the protein content increased significantly, compared with that of the previous day (P<0.05) (Figure 1A). To observe the myotube states, we took photos of different days (Figure 1B). On day 0, there were no myotubes present. On day 1, there were a few small myotubes. Days 3 and 5, showed many big myotubes and on days 7 and 9, the myotubes were much longer and thicker than the previous days. There was no difference between days 7 and 9. We therefore decided to add glutamine after 5 days of differentiation. 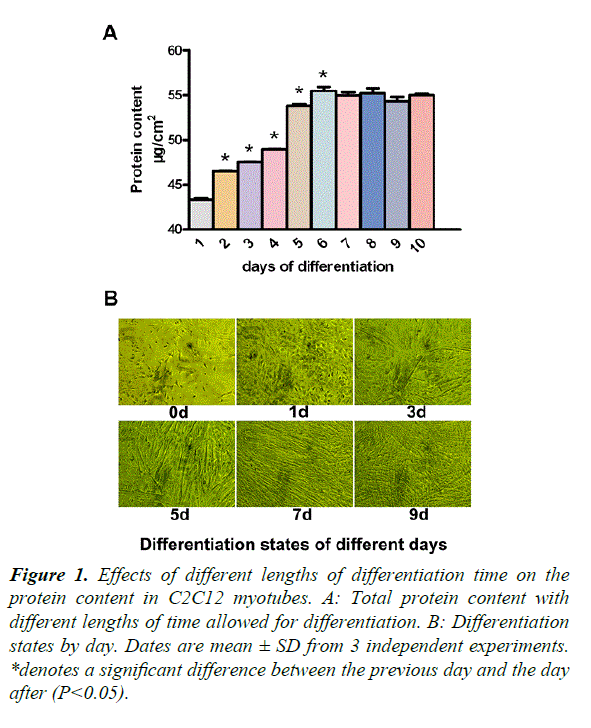 *denotes a significant difference between the previous day and the day after (P<0.05).

Generally, our culture medium had 4 mM glutamine, but we needed to increase the concentration of glutamine, which has high protein content. Results showed that, when comparing protein content, from 0 mM to 20 mM, the 4 mM, 2 mM, and 0 mM groups decreased significantly (P<0.05/0.01), and the 10 mM group increased significantly (P<0.05). So we decided to add the glutamine in a concentration of 10 mM (Figure 2). 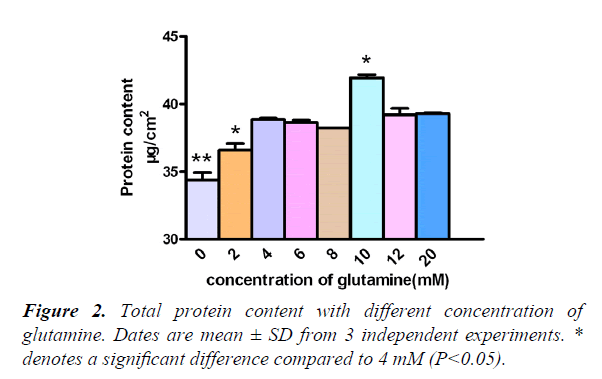 Protein metabolism includes both synthesis and degeneration and the mTOR pathway plays a large role in this process. The total protein content of Gln cells was greater than that of the Con (P<0.05). Glutamine supplementation was shown to promote protein synthesis and inhibit degeneration, which was consistent with the results of previous studies [1-10]. Compared with the protein content of Con, that of Es6 decreased significantly (P<0.01), but Es18 and Es24 were found have significantly increased (P<0.01). The trend of changing protein content in Es was similarly observed in Gln+Es, but the overall level was higher in the latter. Gln+Es6 was also significantly higher than Es 6 (P<0.05) (Figure 3). This demonstrates that glutamine supplementation can help to maintain and encourage the growth of C2C12 myotubes followed by electrical stimulation. 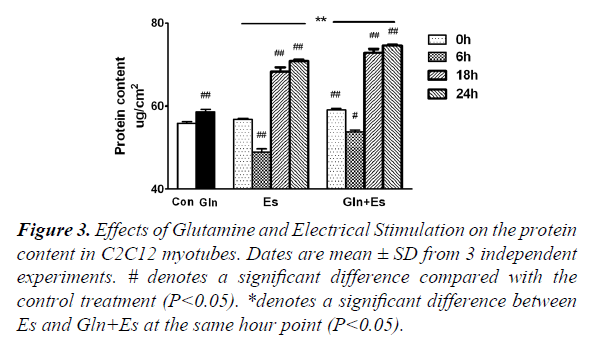 Figure 3. Effects of Glutamine and Electrical Stimulation on the protein content in C2C12 myotubes. Dates are mean ± SD from 3 independent experiments. 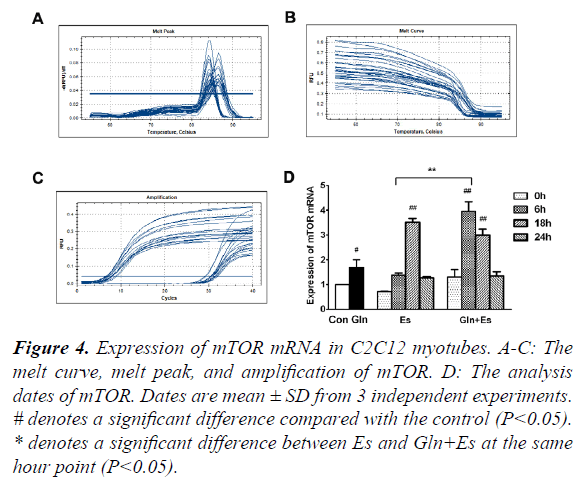 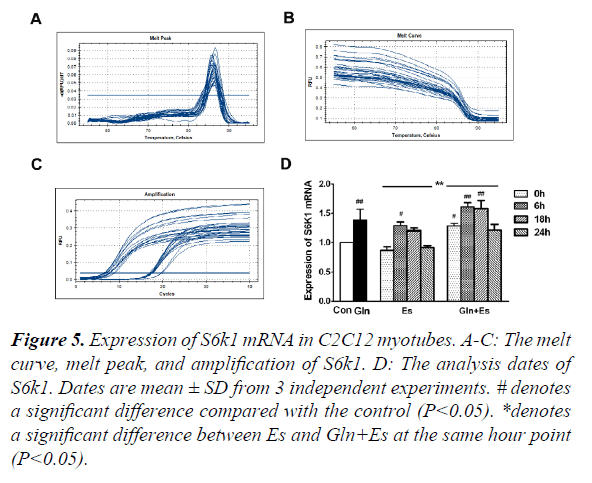 Expression of p-S6 and MHC in C2C12 myotubes

In order to further observe the downstream of mTOR and the expression of contractile proteins, we used the western blot to indicate the p-S6 and MHC (Figure 6A) and quantified the results (Figure 6B and C), which showed that the changes in p-S6 were similar to the changes of mTOR. The MHC changed stablely. This showed that glutamine supplementation promoted MHC by mTOR passway in C2C12 myotubes after electrical stimulation. 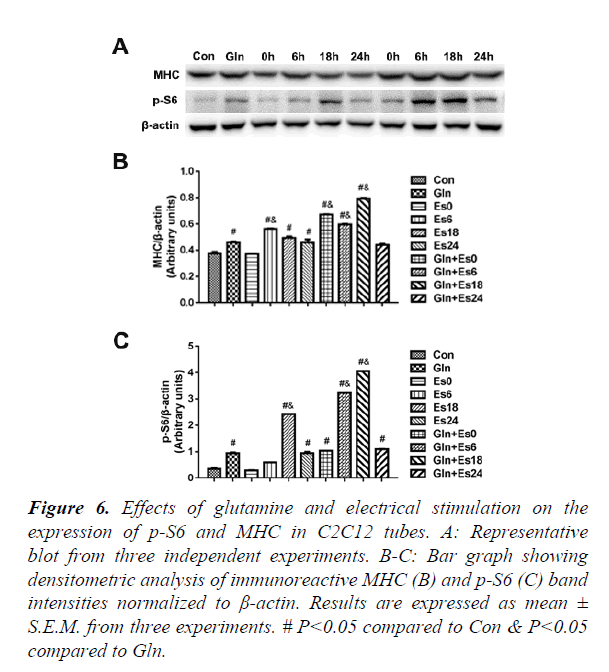 Figure 6. Effects of glutamine and electrical stimulation on the expression of p-S6 and MHC in C2C12 tubes.
A: Representative blot from three independent experiments.
B-C: Bar graph showing densitometric analysis of immunoreactive MHC (B) and p-S6 (C) band intensities normalized to β-actin. Results are expressed as mean ± S.E.M. from three experiments.

A great quantity of energy is consumed in skeletal muscle during exercise. Excise strain can result in the functional disorder of normal membranes and an increase in protein metabolism [10]. As time goes on, the total protein content increases. In long-duration and high intensity exercise, the muscle stretching and overload leads to the degradation of muscle protein and a negative balance of nitrogen.

Glutamine is an important carrier of the nitrogen flow and a precursor to protein synthesis. When the body synthesis of glutamine cannot meet its own needs, exogenous glutamine supplementation should be used as and when required [11,12]. Consequently, exogenous glutamine plays a very important role in maintaining normal function during exercise. Our conclusion, which is consistent with many others, is that glutamine can promote protein synthesis and inhibit protein degradation [13-16]. At this point, amino acids function, not only as a substrate for newly synthesized protein, but also as a “trigger” (signaling molecule) for the initiation of protein synthesis [17]. It has recently been shown that glutamine may have a positive influence on the downstream protein synthesis in mTOR activation in a HeLa cell model [18,19]. However, the precise role played by glutamine in regulating the skeletal muscle mass is not fully understood. The mechanism by which muscle contraction affects the mTOR pathway is also unclear [20,21].

In our study, total protein concentration in Gln was greater than seen in Con, which showed that glutamine supplementation could promote protein synthesis and inhibit protein decomposition. Additional electrical stimulate immediately induced degradation of skeletal muscle protein, 18 h later the cells began to recover and homeostasis was restored. Notably, the protein content of Gln+Es6 was significantly higher than Es6. This suggests that glutamine supplementation maintains and increases the activity of C2C12 myotubes after electrical stimulation. When the body undergoes high intensity exercise for a long time, muscle movement deformation and overload causes an increase in muscle protein degradation and a negative nitrogen balance. Because the glutamine precursor is an important carrier of the nitrogen flow and protein synthesis, exogenous glutamine should be supplemented when the body’s own synthesis of glutamine cannot keep up with its needs. Therefore, glutamine supplementation is important for the exercising body to maintain normal function.

Similar to protein concentration, the Gln expression of mTOR and p-S6 had similar trends, which was a decline in protein followed by a subsequent rise. The difference was that Es reached the peak in 18 hours, while Gln+Es did so in 6 h. This showed that glutamine supplementation might stimulate an earlier expression of mTOR and p-S6 in C2C12 myotubes after electrical stimulation. Amino acids are necessary as a precursor for protein synthesis, but they can also be used as signaling and regulating factors in protein metabolism, such as when they are used as ingredients of mRNA expression. The acting mechanism of the mTOR pathway on muscle contraction is unclear. Many factors may be associated, such as hormones, calcium ion content, mechanical contraction-electric, local hypoxia and nutritional status [22]. Studies have shown that a mixed solution of EAA + CHO further strengthened the mTOR signaling pathway during the recovery period of exercise, and led to increased muscle protein synthesis [23]. Clearly, exercise combined with proper nutrition enhances the effects of the mTOR pathway.

MHC is closely related to skeletal muscle contractility and myosin ATP enzyme activity. Many studies [24,25] have failed to elucidate when exactly MHC significantly changes after exercise. MHC generated similar maximal Ca2+ activated force and cardiac contractile activation differently through modifications of myofilament proteins [26-28]. The MHC expression in both Es and Gln+Es changed stable with a similar trend, decline followed by rise. This showed that glutamine supplementation might increase MHC expression by mTOR passway in C2C12 myotubes after electrical stimulation. These results suggest that electrical stimulation is required for this particular glutamine-mediated event in the protein synthesis pathway.