Spinal cord injury is a common form of trauma in clinic, which is mainly caused by the initial injury and secondary injury [1,2]. The initial injury usually appears passively in a short time, leading to irreversible neurological damage. In addition to the initial injury, the spinal cord injury part may further appear a series of secondary pathological changes, including tissue ischemia, edema, lactic acid accumulation, electrolyte changes, inflammatory state changes, free radical changes, disorder of energy metabolism, and cell apoptosis [1,2]. Current study suggested that spinal cord cell apoptosis is one of the main mechanisms of spinal cord injury [3-5]. It was considered that apoptosis related signaling pathway plays an important role in spinal cord injury [6]. It was found that multiple signaling pathways involved in the process of spinal cord injury, including PI3K/Akt pathway, MAPK pathway, JAK/STAT signaling pathway, and so on. JAK/STAT1 pathway could be activated by extracellular cytokines and growth factors, so as to affect cell proliferation, differentiation, apoptosis, and immune regulation [7,8]. Some scholars revealed that JAK2/STAT3 signaling pathway plays an important role in neuron apoptosis model [9,10]. JAK2 and JAK3 were found in non-phosphorylation status in normal spinal cord tissue. Ginkgolide B is a kind of lipid material extracted from ginkgo biloba that plays a protective effect to cerebral hemorrhage caused by neuron injury through inhibiting nitric oxide synthase system [11]. Clinical research showed that ginkgolide B had a protective effect for Alzheimer’s disease and other cognitive impairment diseases. Moreover, It was confirmed in vitro that ginkgolide B can protect spinal cord neurons through suppressing cPLA2 activation [12-14]. In this study, we constructed rat spinal cord injury model and applied ginkgolide B treatment, aiming to explore the molecular mechanism of ginkgolide B neural protection.

Experimental animals: Male SD rats weighted 230-260 g were applied for experiment. All the rats were purchased from Shandong University. Rats were used for all experiments, and all procedures were approved by the Animal Ethics Committee of Jining No.1 People’s Hospital.

Acute spinal cord injury model construction and ginkgolide B treatment: After anesthesia, the rat was incised on back midline. T10 spinous process was treated as the central, and the spinous process and spinous layer of T9-T11 were also exposed [15,16]. At 30 min after surgery, the rats in ginkgolide B group received ginkgolide B intraperitoneal injection at 4 mg/kg daily for 14 continuous days.

The rat was anesthetized at different time points to open the thorax. Left ventricular and aorta were perfused by normal saline. T10 segment was collected and fixed by 4% paraformaldehyde for paraffin section. The left spinal tissue was stored in liquid nitrogen.

The slice was stained by TUNEL reagent according to the manual (Beyotime). Under the microscope, 4-6 visual fields were randomly selected for cell counting. Apoptotic index=(TUNEL positive cell/total cell) × 100%.

Spinal tissue protein was separated by SDS-PAGE and transferred to PVDF membrane. After blocked by 5% skim milk, the membrane was incubated in phosphor-STAT1, Bcl-2, and Bax antibodies. Total STAT1 and GAPDH were selected as internal reference. The membrane was detected by chemiluminiscence and the image was disposed using Image J.

All the data analysis was performed on SPSS17.0 software. The data depicted as mean ± standard deviation. T test and ANOVA were applied for data comparison. P<0.05 was considered as statistical significance. 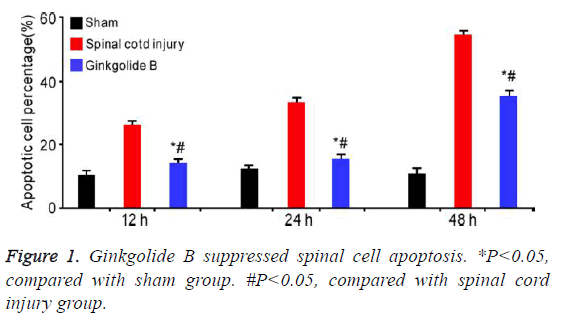 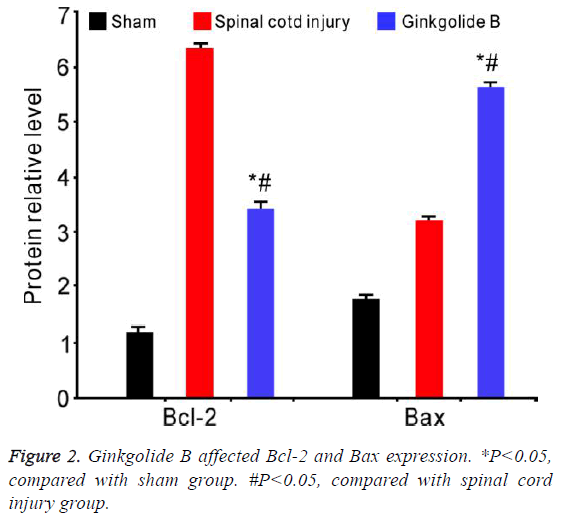 We collected spinal tissue for section and HE staining. The results demonstrated that compared with spinal cord injury group, the cell number in spinal gray matter markedly elevated in ginkgolide B group at 12 h, 24 h, and 48 h (Figure 3, P<0.05). 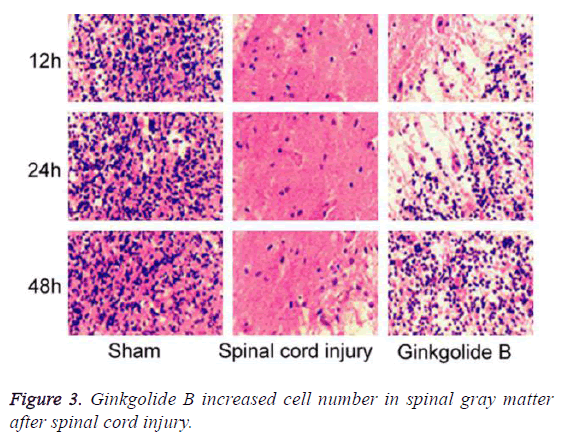 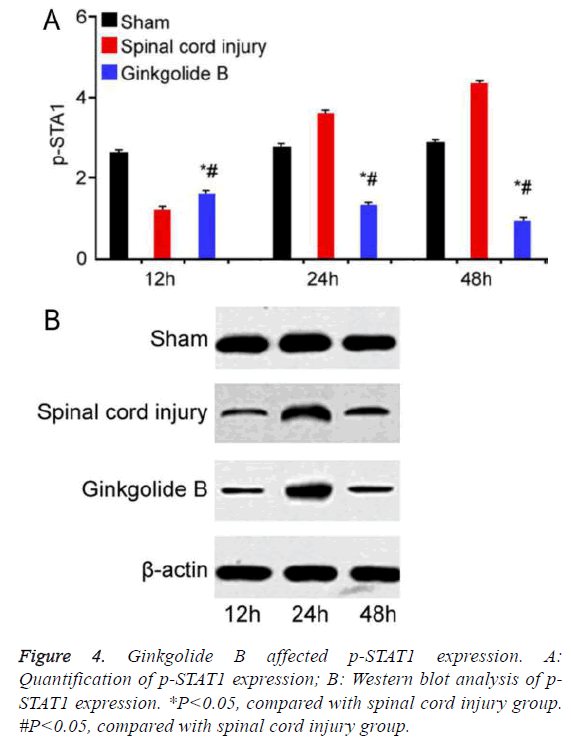 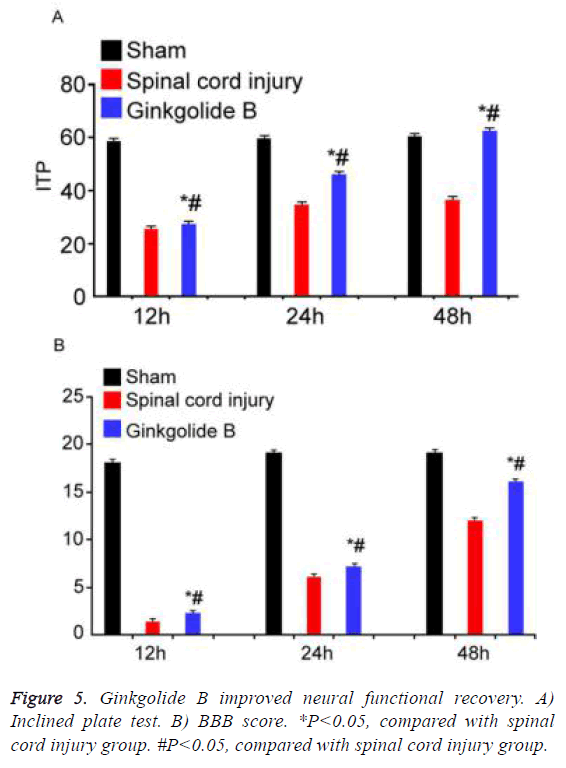 This work was supported by Yantai science and technology planning project (NO. 2016WS040).