Mesh repair of the incisional hernia is a standard procedure and associated with lesser recurrence rate as compared to primary suture repair. Intraperitoneal mesh migration is a rare cause of recurrence after onlay mesh repair. Hereby, reporting a rare case of intra-peritoneal migration of polypropylene mesh and its adhesion to bowel wall following onlay mesh repair of incisional hernia.

Incisional hernia is hernia of the anterior abdominal wall, occurring through previous surgical incision. During mesh repair of incisional hernia, mesh is placed at various sites or planes using onlay, inlay or underlay technique [1]. In onlay technique, mesh is placed anterior to rectus sheath with or without primary closure of hernia defect. Incidence of intra-peritoneal mesh migration following onlay repair is very rare as compared to inlay or underlay techniques. Also, with invention of various types of mesh e.g. dual mesh, composite mesh and biological mesh, chances of bowel adhesion with mesh are minimal [2].

A 54 year old female presented in surgical O.P.D with complaints of swelling over anterior abdominal wall at previous surgical scar since one year and pain since 4 months. In her surgical history, she had undergone laparotomy through infra-umblical midline incision 8 years back for appendicular perforation following which she developed incisional hernia after five years. Patient was operated for incisional hernia and onlay mesh repair was done after closure of midline hernia defect with polypropylene suture. Three years after this surgery, patient developed recurrence of the incisional hernia. 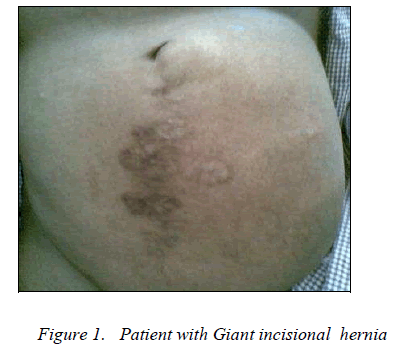 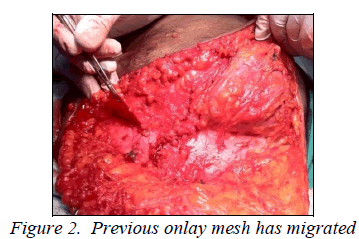 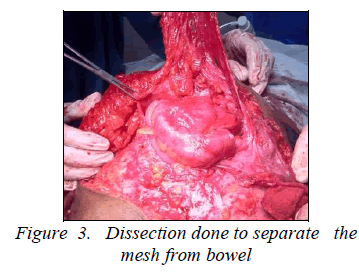 Figure 3: Dissection done to separate the mesh from bowel. 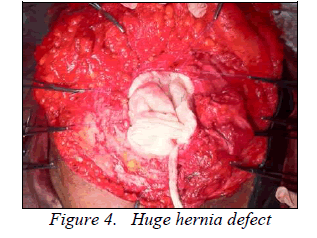 Patient was then operated in our institution and during surgery it was found that a hernial sac was present occupying left lower quadrant of abdominal wall and mesh was displaced to the right side with polypropylene suture of previous surgery. On further dissection it was discovered that mesh has got migrated to peritoneal cavity in the midline region and was densely adhered to ileum at two sites. Bowel was then freed from mesh which resulted in serosal tear, which was repaired later and previous mesh was completely removed. Hernial sac then opened, adhesion between omentum, bowel and sac was separated and hernial content reduced to peritoneal cavity. Then hernia defect with sutured peritoneum, which was 12cm x 8cm, was repaired with polypropylene mesh. Mesh was laid between musculo-aponeurotic layer and subcutaneous fat and overlapped beyond the defect margin for about 4cm and sutured with polypropylene. Suction drain was kept and wound closed in layers. Postoperative period was uneventful and patient recovered without any complications.

Hernias are among the oldest known affliction of humankind and surgical repair of hernia is among the most common general surgery procedure performed today. Despite of various competent methods, technical aspects of hernia repair continue to evolve [2].

In 1958 Usher et al developed polypropylene mesh, Marlex, and used it in large hernia repair. The use of mesh significantly reduced the incidence of recurrence following repair. However, this is not without complication, the most common being infection and migration of mesh [1,3]. With use of presently available dual mesh, made up of expanded PTFE with impregnated silver carbonate and chlorhexidine and composite mesh which is made up of more than one type of material, incidence of bowel erosion and mesh migration have reduced [1].

Our case illustrates certain important points. The literature reports very few cases of mesh migration and visceral erosion and that to after underlay or pre-peritonial mesh repair [4,5]. This case clearly demonstrates that mesh migration can occur even after onlay or overlay mesh repair.

We feel that above mentioned complication in our case was probably due to repair of hernia defect under tension before laying onlay mesh during previous surgery. This might have resulted in cut through and give away of suture. Furthermore, improper placement of stay sutures, to keep the mesh in place, would have lead to mesh migration [6,7]. Lastly, anatomically the rectus sheath is deficient posteriorly below the arcuate line and hence, after repair there is no fascial layer between the mesh and bowel, thereby predisposing to mesh migration.

Hence, we recommend that incisional hernia repair should be totally tension free, mesh should be anchored to fascial or musculoaponeurotic layer adequately with nonabsorbable suture and lastly, there must be some tissue layer in form of omentum or peritoneum between abdominal viscera and mesh.