Methods: A total of 1371 subjects were recruited for the study. These subjects were divided into three groups according to the category of diseases. In Group 1, 842 patients who bear coronary atherosclerosis were involved. Group 2 consisted of 369 patients suffering from cerebral atherosclerosis. And the remaining 160 patients with acute pancreatitis (AP) made Group 3. The effects of gender, lifestyle conditions (such as cigarette smoking and alcohol consumption), and age on Hcy levels were individually investigated for the three groups.

Conclusions: Our research results further strengthen the prevalent viewpoint that male patients suffering from the eHcy associated diseases bear higher Hcy levels than female patients, which may provide explanation why male population has higher prevalence of eHcy associated diseases. The results of this study also indicated that different genders may have different Hcy control targets, which means that the normal range of Hcy levels 5 ~ 15 μmol/L may not be suitable for both genders.

It has been strongly evidenced by previous laboratory and clinical studies that eHcy is an independent risk factor for thrombotic vascular diseases, such as cardiovascular diseases [1-9], ischaemic stroke [1,2,10,11] and acute pancreatitis (AP) [12-15]. Over the past decades, a lot of efforts have been paid to illustrate the underlying mechanisms how eHcy influences the progress of these diseases. Previous studies have suggested that eHcy promotes atherosclerosis (the pathogen of the above diseases) through several mechanisms including endothelial dysfunction, smooth muscle cell proliferation, the activation of coagulation factors and platelets, oxidation of low-density lipoprotein, and the activation of inflammatory [16-18].

Generally, the enhancement of eHcy concentration can be attributed to minor genetic abnormalities or/and nutritional deficiencies of essential cofactors including folic acid, vitamin B6 and B12. Previous studies have disclosed that men have higher levels of Hcy than women [19-21]. However, to date this phenomenon has never attracted enough attention in clinic and still remains to be elucidated.

Over a long term of clinical observation, we investigated the effects of factors like gender, lifestyle conditions (such as cigarette smoking and alcohol consumption) and ages, on Hcy levels. The results of this study may provide answers to the following two questions: 1. Is there an obvious disparity of Hcy levels between different genders in Chinese population? 2. Among lifestyle conditions, ages and gender, which was the most important factor that affects the Hcy levels? Answers to these questions hopefully assist to find new therapeutic regimens for the reduction of the plasmatic Hcy concentration of and the prevalence of diseases associated with eHcy.

Clinical data on the subjects were collected from 2012 to 2015. General characteristics of the studied population are presented in Table 1. The study was approved by the ethical committees of Henan Provincial People’s Hospital. Due to the retrospective nature of the study, informed consent was waived. Information about the medical history, tobacco habits and alcohol consumption of each individual was obtained from the reports at admission.

Venous blood samples were drawn and collected in ethylenediaminetetraacetic acid (EDTA) tubes. Blood samples of all the patients were taken within 24 hours after admission to the hospital. Plasma levels of Hcy were measured on an automatic biochemical analyser (AU5400, Olympus Optical Co, Sizuoka, Japan).

The effects of tobacco smoking, alcohol consumption and gender on Hcy levels were investigated using T test and Chi- Square test. A P value of <0.05 (two-tailed) was considered to be statistically significant.

The influences tobacco smoking and alcohol consumption on Hcy levels

The male patients in each group were divided into two subgroups, one subgroup without smoking or drinking habits, and the other one with both smoking and drinking habits. As is shown in Table 2, the Hcy levels of male patients among all the three groups had no significant divergence.

The influence of gender on Hcy levels

The influence of ages on Hcy levels 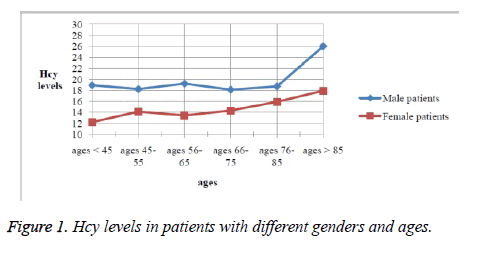 Figure 1: Hcy levels in patients with different genders and ages.

Previous research reported that eHcy was an independent risk factor for thrombotic vascular diseases. Hence, proper control of Hcy levels helps to reduce the prevalence of eHcy-related diseases. The well-known factors that can influence Hcy levels include the activity of the enzymes such as methylenetetrahyrdofolate reductase (MTHFR), dietary intakes of methionine, folate and Vitamin B12. Lifestyle conditions such as cigarette smoking, excessive coffee and alcohol consumption also play important roles in modulating Hcy levels.

Previous research discovered that lowering Hcy concentrations by 3 μmol/L (achievable by increasing folic acid intake) would reduce the risk of ischemic heart disease by 16%, deep vein thrombosis by 25% and stroke by 24% [1]. Combined with our results, it can be concluded that the higher prevalence of thrombotic vascular diseases in male population may be in large part due to the higher Hcy levels in males, and that increasing folic acid and vitamin B12 intake may reduce the prevalence of such diseases in males. Further studies are needed to confirm this conclusion.

The above results further strengthen the phenomenon that male patients with the eHcy associated diseases had higher Hcy levels than female patients. The unveiling of the mechanism behind this difference promisingly provides new therapeutic regimens for the reduction of the plasmatic Hcy concentration and the prevalence of eHcy-related diseases. It is also indicated that different Hcy control targets can be expected among genders. The recognized range of Hcy levels 5 ~ 15 μmol/L may be not suitable for male and female patients.