A pituitary adenoma is a rare and benign pituitary tumor observed in early childhood. Prolactinoma is the most common subtype of pituitary adenomas in older children and adolescents. Patients usually present with oligomenorrhea/amenorrhea. Laboratory investigations and radiological imaging are important in confirming the diagnosis of pituitary adenomas. Administration of cabergoline is recommended as first-line therapy, although refractory cases require surgical treatment. We report the case of a female adolescent with galactorrhea and an atypical presentation of a pituitary adenoma.

The pituitary gland is located inferior to the hypothalamus [1]. A pituitary adenoma is a rare and benign pituitary tumor comprising <3% of all intracranial tumors in early childhood [2]. Prolactinoma is the most common subtype of pituitary adenomas in older children and adolescents comprising 46-68% of all pediatric pituitary adenomas [2]. Based on size, pituitary adenomas can be categorized as microadenomas (<10 mm) or macroadenomas (≥ 10 mm) and are more common in children and adolescents [1,3]. Patients frequently present with oligomenorrhea/ amenorrhea, galactorrhea or visual disturbances [2]. Galactorrhea is defined as the secretion of breast milk that could occur in either gender, unrelated to pregnancy or breastfeeding a newborn [4]. Galactorrhea is common in adults and rare in children [4]. Early diagnosis is important for a better clinical outcome [5].

We present the case of a female adolescent with galactorrhea and an atypical presentation secondary to a macroadenoma of the pituitary gland.

A 15 year old adolescent female with a known history of mild mental impairment and depression (for which she was treated with risperidone for 3 years) presented to an endocrinologist at age 10 because of bilateral breast pain and heaviness unrelated to infection. These complaints were followed by intermittent spontaneous discharge of milk (not manually expressed) from both breasts for 2-3 months. No history of excessive breast stimulation, manipulation, or prolonged friction from clothing was reported. The milky white discharge was profuse and stained her shirt (Figure 1); however, no bloody discharge or foul smell was present. She reported menarche at age 11. Her menstrual pattern progressed to heavy and irregular menses lasting >10 days and required the use of 7-8 sanitary pads/day. No associated headache, visual disturbances, or symptoms suggestive of hypothyroidism were noted. The patient was known to have mild mental impairment since birth secondary to birth asphyxia. No history of chest or spinal cord surgeries, injuries, burns, or tumors was reported. She had no known drug allergy. Her current treatment included cabergoline, risperidone and Ferotonic for menorrhagia. Her symptoms were getting worse overtime despite good drug compliance. A history of mental retardation was reported in family members; however, none had received any antipsychotic therapy and none reported galactorrhea. Her uncle had been diagnosed with schizophrenia; however, her 3 sisters and a brother were mentally normal and active. 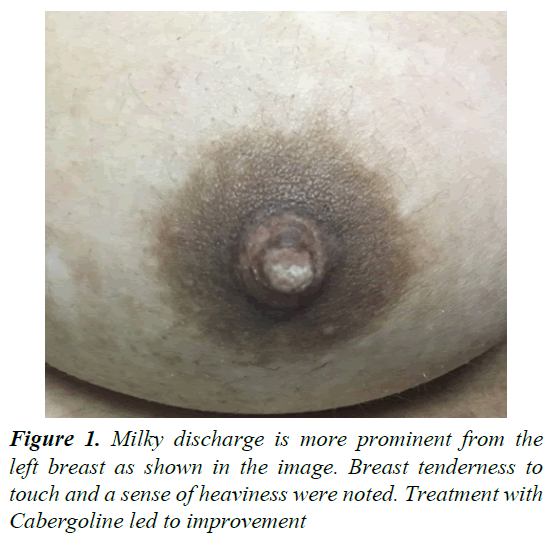 Figure 1:Milky discharge is more prominent from the left breast as shown in the image. Breast tenderness to touch and a sense of heaviness were noted. Treatment with Cabergoline led to improvement.

Physical examination revealed a cooperative girl with normal vital signs. She weighed 42.9 kg (10th percentile) and was 155 cm tall (10th percentile). Milky discharge was observed from both breasts-more from the left side with severe tenderness to touch; however, no breast masses could be palpated. No goiter or signs of hypothyroidism were noted. The results of examination of other systems were unremarkable.

Laboratory investigations (Table 1) and radiological imaging were performed for further assessment. Elevation of serum prolactin was the primary cause of galactorrhea. Decreased milky discharge was noted after 1 month of oral cabergoline. Based on the laboratory test results, further radiological investigation was required to evaluate her condition. Magnetic resonance imaging (MRI) of the brain revealed a right anterior pituitary nodule that was described as a macroadenoma based on its size (Figure 2).

Table 1. All biochemical findings are observed to be within the reference range, except findings indicating hyperprolactinemia.

As this led as to the conclusion that the patient’s symptoms were mainly due to the pituitary macroadenoma. 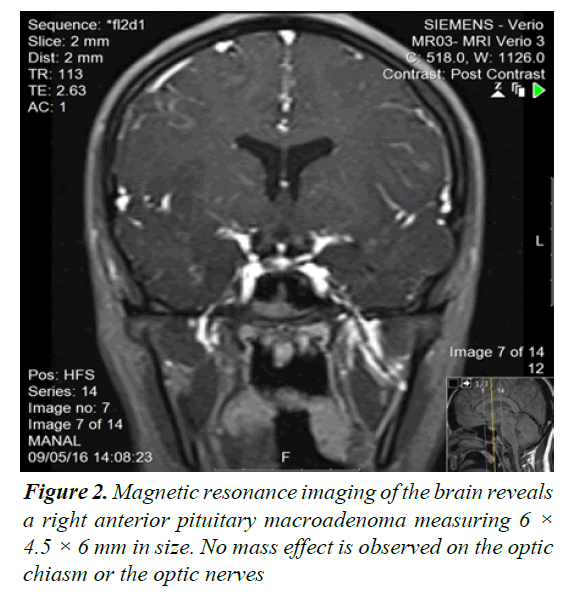 Figure 2:Magnetic resonance imaging of the brain reveals a right anterior pituitary macroadenoma measuring 6 ◊ 4.5 ◊ 6 mm in size. No mass effect is observed on the optic chiasm or the optic nerves.

Pituitary tumors are considered rare in both children and adolescents [6]. Symptoms of pituitary tumors are attributable either due to excessive levels of prolactin in the blood or secondary to a mass effect on the brain [3]. Prolactinomas are considered the most common subtype and are diagnosed based on serum prolactin levels and radiological tests such as MRI to further assess their morphology [3]. In peripubertal patients, most prolactinomas are observed primarily in older children and female adolescents [6]. Patients typically show galactorrhea and amenorrhea [7]. Our patient reported menorrhagia, although it is not a typical symptom associated with a macroadenoma. Physiological causes of galactorrhea include lactation or pregnancy, and pathological causes include trauma or tumors of the hypothalamic-pituitary axis, such as macroadenomas, prolactinomas or primary hypothyroidism; drug-induced causes are related to the use of oral contraceptive pills or antipsychotic drugs [4,8]. In this patient, the most likely etiological contributors to galactorrhea were a macroadenoma and risperidone use. A prolactin level of >500 μg/l confirms the diagnosis of a macroadenoma [8], whereas drug-induced hyperprolactinemia is associated with prolactin levels of <200 μg/l [7]. In this patient, the prolactin level was >500 μg/l, leading to a high index of suspicion for a pituitary macroadenoma rather than druginduced hyperprolactinemia.

Non-tumor-related hyperprolactinemia is most commonly attributable to drugs-antipsychotics being the most common contributory drugs [8]. Antipsychotics act by blocking dopamine (D2) receptors, leading to hyperprolactinemia [9]. Risperidone (an antipsychotic drug) is known to elevate serum prolactin levels, although not to the extent as a macroadenoma [8,9]. The median duration between administration of antipsychotic medications and development of galactorrhea is 20 days (range 7-75 days) and prolactin levels are observed to return to baseline 3 days after discontinuation of the drug [8,9]. Galactorrhea, a common adverse effect of antipsychotic drugs is more commonly observed in female adolescents [9]. Galactorrhea develops in 50-100% of patients using risperidone [8]. Other adverse effects associated with this medication are abnormal breast development and amenorrhea [10]. A pituitary MRI is useful for differentiation between druginduced and pituitary adenoma-induced symptomatic hyperprolactinemia [8]. An MRI in this patient revealed a right anterior pituitary macroadenoma (Figure 2). Although imaging confirmed the presence of the pituitary adenoma, drug-induced hyperprolactinemia was considered a secondary contributory factor as symptoms of galactorrhea were getting worse. D2 receptor agonists such as cabergoline are considered first-line therapy for prolactinomas [6]. These are effective in 80-90% of patients with microadenomas and 70% of those with macroadenomas through reduction in tumor size, lowering of prolactin levels, and normalization of pituitary function [6]. Cabergoline is considered more effective and is better tolerated by patients than other dopamine agonists and is thus the preferred initial drug of choice [6,8]. Drug compliance is important because patients usually receive treatment for 2-4 years, and discontinuation of treatment could lead to recurrence of hyperprolactinemia and re-expansion of the tumor [4,6]. This patient received therapy for about 18 months with good compliance and had marked clinical and biochemical improvement. Surgical intervention is required in those who are resistant to dopamine agonists and for those who present with emergencies such as acute visual disturbances [6]. Long-term follow-up is important in patients with hyperprolactinemia to determine the prognosis and clinical outcome [11].

Galactorrhea can result from a pituitary macroadenoma; however, secondary causes such as drug-induced hyperprolactinemia have been reported, particularly with the use of antipsychotic drugs such as risperidone. Pediatricians should be aware of the adverse effects when prescribing antipsychotics to children and adolescents.

A written consent was taken and approved by the patient’s guardian.