Objective: The aim of the present study was to evaluate the effects of frostbite on feet using Cell Alive System (CAS) freezer with an oscillating magnetic field. We recently reported the application of the CAS freezer to the cryopreservation of various tissues, but did not evaluate the effects of frostbite after freezing. In order to characterize how a freezer with a magnetic field affects frostbite, we observed changes using laser Doppler blood flow measurements, X-ray imaging, and tissue specimens from mouse feet.

Conclusions: These results suggest that the CAS freezer prevented frostbite associated with tissue freezing. These rose it’s may potentially lead to the development of novel methods for cryopreservation.

In recent years, ABI has succeeded in developing an innovative freezing technology that prevents the crystallization of water molecules by freezing under a magnetic field [1,2]. This freezing technology was developed through the exploration of methods for the storage of frozen foods, and is characterized the by vibration of water molecules using a magnetic field, which prevents the generation of ice crystals and enables cryopreservation of an item in an amorphous state. This freezing technology, called the Cells Alive System (CAS), does not deteriorate the freshness of foods.

When cells are frozen, the formation of ice crystals damages cell membranes and the cytoskeleton. When these cells are thawed, apoptosis or necrosis occurs, which induces frostbite. Furthermore, since the destruction of blood vessel walls disrupts the circulatory system in animal tissues, severe frostbite leads to causes tissue necrosis, ultimately resulting in gangrene [3].

In an effort to freeze cells for preservation without damaging them, the formation of ice crystals needs to be prevented by making the environment inside cells amorphous through the use of cryoprotective agents or adjusting the rate of freezing.

Techniques for cryopreservation have a wide range of applications, and previous studies reported the cryopreservation of not only cells, but also tissues and organs, including arterial valves and ovaries. However, bodily fluids that are in contact with cells must theoretically be replaced with cryoprotective agents in order to preserve organs in a frozen state, and many cryoprotective agents, such as dimethyl sulfoxide (DMSO), are known to be cytotoxic. Thus, there is currently no established technology for the cryopreservation of organs [4].

The CAS has been implemented for the cryopreservation of cells and tissues with satisfactory results. We herein investigated the effects of the CAS freezer on the onset of frostbite after freezing in the feet of mice, without replacing of blood and tissue fluids with cryoprotective agents.

We used male C57BL/6 mice aged 8 weeks (Nihon SLC, Shizuoka, Japan) in the experiments reported here. The animals were housed in Plexiglas cages measuring 40 × 25 × 15 cm and were kept in a room with controlled temperature (22 ± 3°C) and lighting (lights on from 8:00 AM to 8:00 PM). The bedding of the cages consisted of wood shavings. Food and water were freely available. This study was approved by the Animal Care and Use Committee of Hiroshima University and conformed to the Guide for the Care and Use of Laboratory Animals from the National Institutes of Health. 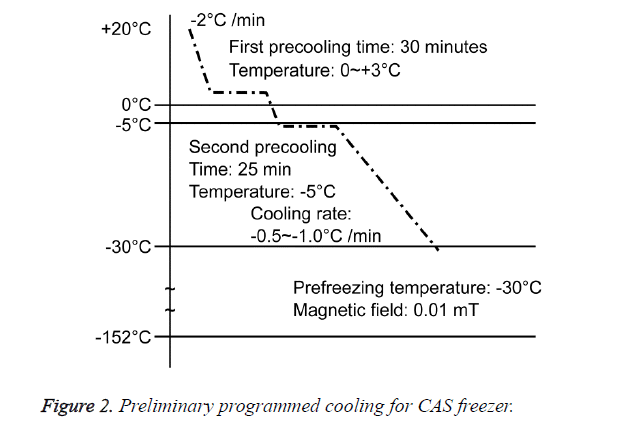 A general anesthetic with pentobarbital sodium (Wako Pure Chemical Industries, Ltd., Osaka, Japan) was given to the mice in the CF and DF groups prior to the experiment, and the right hind foot, from the heel back, was fixed in an extended state using a 5-mm plastic tube before it was frozen (Figure 3). The foot of a mouse was defrosted naturally after freezing for 10 min. Mice were then reared in a cage under normal conditions for 10 days (Figure 4). Laser doppler blood flow measurements (PerifluxPF3, Perimed Co., Fukuoka, Japan) were conducted just after freezing with the CAS or dry ice and 5 days later in order to evaluate the circulation (Figure 5). The frozen sections were subjected to X-ray exposure in a micro-FX1000 system (Fuji Film Inc., Tokyo, Japan) after 10 days in order to evaluate the bone tissue (Figures 6A-6C). Perfusion fixation was subsequently performed and, for histological examination, the tissue specimens from the frozen sections were embedded in paraffin and sectioned with hematoxylin and eosin (H&E) staining (Figures 7A-7C). 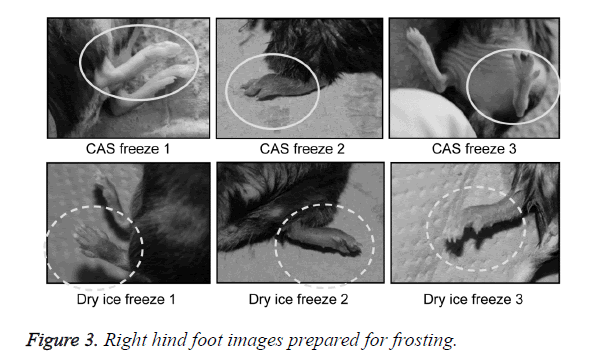 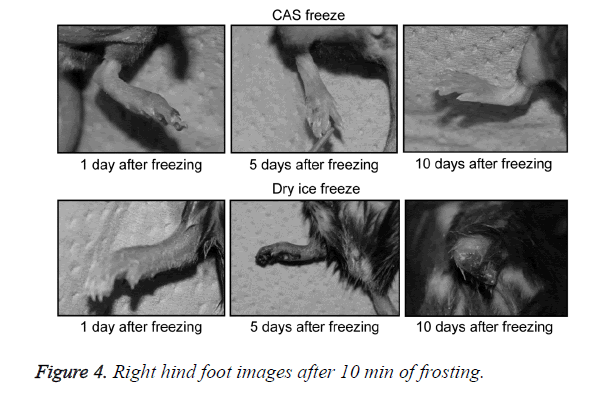 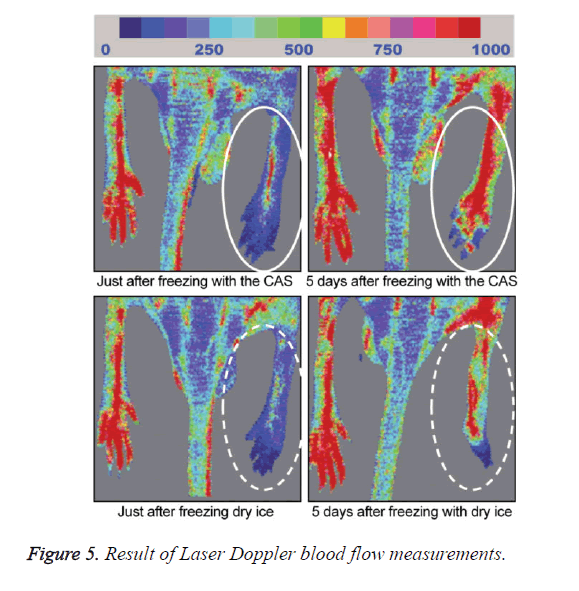 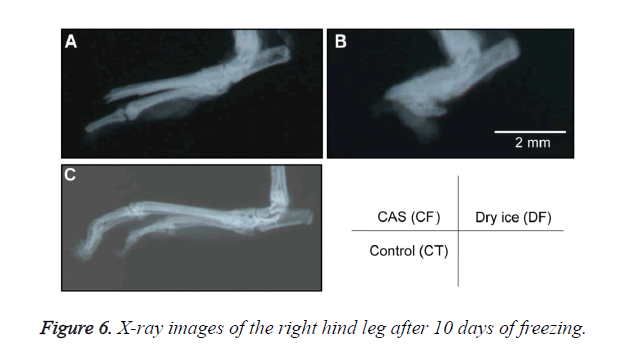 Figure 6. X-ray images of the right hind leg after 10 days of freezing. 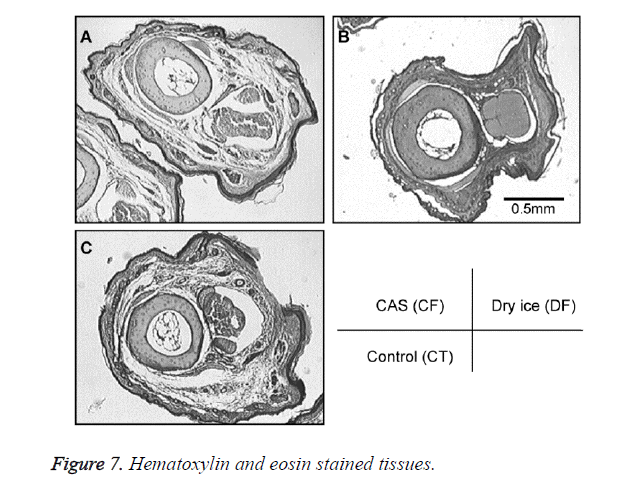