Forecast of difficult Laparoscopic cholecystectomy by Sonography: An added advantage

Forecast of a difficult operation can help the surgeon as well as the patient to prepare better for any intra-operative risk and its effective management. This was a prospective study conducted from June 2008 to july 2011 that included 298 patients who underwent elective laparoscopic cholecystectomy for uncomplicated gallstone disease. Our entire series consisted of 298 patients, in whom 270 patients were operated laparoscopically, with 28 patients converted to open cholecystectomy. Patient data were analysed by univariate and multivariate analysis, using conversion to open cholecystectomy (OC) as a dependent variable. In 28 of 298 patients (9.4%), LC was converted to OC. In the univariate analysis, contracted gallbladder (< 5cm; Odds Ratio [OR] 0.776 95% confidence intervals [CI] 0.25 – 2.44), stone impaction (OR 2.6: 95% CI 1.12 – 5.1), thickened gall bladder wall (OR 3.81: 95% CI 1.11 – 13.11), and cholecystitis (OR 4.4: 95% CI 1.2 – 15.9) were able to predict pre-operatively the need for conversion. Logistic regression analysis defined only the sonographic sign of gall bladder thickness greater than 3 mm as a predictor of conversion. Ninty eight, out of total 298 patients, had gallbladder wall thickness of greater than 3 mm by preoperative ultrasonography and of these 46 (46.9%) had difficulty in dissection per-operatively and 20 (20.4%) underwent conversion to an open cholecystectomy. A preoperative ultrasonographic evaluation for symptomatic cholelithiasis, which shows a thick gallbladder wall (≥3 mm) with calculi, is a sign of caution clinically for likely a difficult laparoscopic cholecystectomy procedure which may require conversion to an open cholecystectomy procedure. These results revealed that conversion to open cholecystectomy can be predicted preoperatively. Laparoscopic conversion to open cholecystectomy also depends upon multiple factors like who have acute cholecystitis, multiple adhesion ; however, the correlation between its clinical and pathologic diagnosis is poor. Radiological excellance in ability to determine the risk for conversion have paramount importance and implications for surgical care.

cholecystectomy (LC) is the standard procedure for the treatment of symptomatic gallbladder stones. Although few requires conversion to open cholecystectomy [7-10]. On the basis of radiological findings, surgeons can select the cases appropriate for their skills aiming at reducing operative complications and minimizing the waste of operating time available. Patients with long-standing disease and previous bouts of cholecystitis or pancreatitis are at higher risk of experiencing a difficult procedure or conversion and may be at increased risk of bile duct injury or injury to the adjoining viscera. Preoperative information of possible intra-operative complications such as uncontrollable bleeding or unclear anatomy, conversion to open surgery will give an extra benefits. It can be helpful to raise level of cautiousness and establish a criterion that could assess the risk for conversion preoperatively. It would be helpful to accurately identify an individual patient’s risk for conversion based on preoperative information can result in more meaningful and accurate preoperative counseling, improved operating room scheduling and efficiency, stratification of risk for technical difficulty, and appropriate assignment of resident assistance, may improve patient safety by minimizing time to conversion, and better mental preparation of surgeons and patients also.

Detection of gallstone on basis of ultrasonography, has been able to reach reliably in greater than 90% of symptomatic patients. Measurement of the thickness of the gallbladder wall by ultrasound is accurate to within 1 mm in 93% of patients.[11-14] Gallbladder wall thickness greater than 3mm is suggestive of cholecystitis in some, but not all literature reports [15-17]. There are several clinical reports in the literature where relationship between preoperative ultrasound gallbladder wall thickness and the technical difficulty of a LC is well established [2,19-21]. The purpose to undertake this study was to evaluate preoperative ultrasound data predicting or forecasting a difficult cholecystectomy and how this would be beneficial in term of better management of patients.

The study was conducted in the Department of Surgery and Department of Radio diagnosis, Jawaharlal Nehru Medical College and hospital, Aligarh, UP. This was a prospective study, 298 patients who underwent LC between june 2008 and july 2011 were included. All the patients had symptomatic cholelithiasis, normal liver function tests (LFT), and n on-dilated bile ducts. Exclusion criteria included patients with concomitant common bile duct (CBD) stones and patients with suspected malignancy, uncontrolled hypertension, diabetics were excluded.

All Patients underwent normal routine detailed clinical history and investigation like Complete hemogram, LFT, Chest X-ray and other preanaesthetic investigations were carried out. Abdominal ultrasonography was performed 1- 2 days prior to the operation. Surgeons who had experience of more than 500 cases of laparoscopic surgery performed the LC. Therefore, the learning curve statistics do not apply to this study

Different intraoperative variables (outcomes) included operative parameters: total time duration of operation (in minutes), bleeding, access to peritoneal cavity, GB bed dissection, intraoperative GB wall thickness, anatomical aberrations, GB wall injury, stone spillage inside peritoneum, difficult extraction, extension of incision for extraction, and conversion to OC. Bleeding during surgery was graded as minimal, moderate or severe. Duration of surgery included the time from the insertion of the Veress’ needle to closure of the trocar site [5] and was evaluated as a dichotomous variable (≤60 minutes versus ≥60 minutes). The operating surgeon described the access to peritoneal cavity as ‘easy’ or ‘difficult’.

Univariate analysis was performed using the chi squared test to determine the associated factors with difficult LC, and odds ratios and their 95% confidence intervals were calculated and correlation matrix was developed to evaluate correlation between individual predictors. A multiple stepwise logistic regression analysis was then performed using all significant predictors from the univariate analysis and relevant interactions.

Of the 298 consecutive patients who underwent cholecystectomy for symptomatic gallbladder disease, 270 (90.6%) were removed laparoscopically for calculus disease. Twenty eight (9.4%) required conversion to an open cholecystectomy. Gallstones were found in all patients whose preoperative ultrasound demonstrated gallstones. 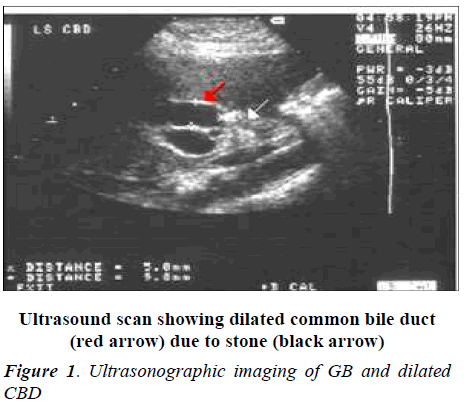 Table 1: Relationship of conversion to open cholecystectomy (n=298) with gender 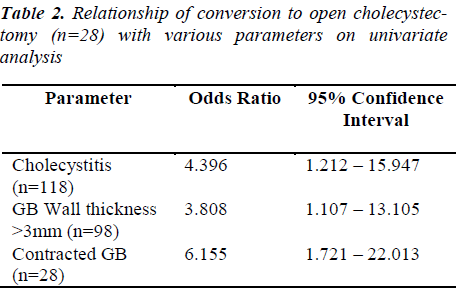 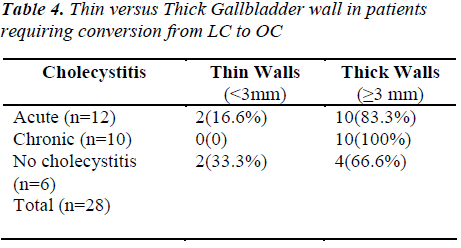 Now-a-days Laparoscopic cholecystectomy considered as a gold standard for the treatment of symptomatic gallstones, but the procedure is technically more demanding than the classical OC especially in difficult cholecystectomy [10,18,22]. The main aim of this study was to evaluate some preoperative factors, which can reliably predict the chances of conversion to the open procedure and the complications during laparoscopic cholecystectomy. On the part of patients benefit, they can be informed of possibility of complications and conversion to the open procedure. The patient can be mentally prepared better and can adjust his or her expectations accordingly. In addition, the surgeon can directly perform the classical open cholecystectomy in the patients with presumed difficult surgery thus saving operating time and the conversion rate.

In our study, ultrasonography has proven to be a reliable and accurate diagnostic examination for biliary tract disease. In our study, we found a good correlation between gallbladder wall thickness with conversion to the open procedure and adhesions in accord with reports in other studies. In addition, information related to contracted GB or distention, presence of pericholecystic fluid, a sonolucent intraluminal layer, and the diameter of the common duct were also good predictor of difficulties peroperatively. Conversion from a LC to an OC is an intraoperative decision by the laparoscopic surgeon when visualization and identification of the operative anatomy is impaired by increased vascularity from the inflammatory response [23] dense adhesions, edema, fibrosis, or abnormal anatomy, such as short cystic duct or an intrahepatic

In our study, conversion rate from LC to OC was high (9.4%) was high, which could be attributed to the multiple attacks of acute cholecystitis suffered by our group of patients before reporting to the hospital, and negligence of initial symptoms. patient pop, we noted that the majority (90.6%) of patients with gallstones had an LC. There is a low threshold to convert the laparoscopic approach to open surgery even by experienced hands to take patient safety first. These indications include inability to obtain adequate exposure of calot’s triangle, bleeding that cannot be controlled laparoscopically and extensive intraperitoneal adhesions. In results, no common bile duct injury was occurred or detected during our studied period. GB.

Authors found a good correlation between gallbladder wall thickness with conversion to the open procedure and adhesions in accord with reports in other studies. Of all the 28 patients in this series who required conversion to an OC, 20 patients (71.4%) had a preoperative ultrasound gallbladder thickness of 3 mm and more. Several other studies have reported oppositely that a thickened GB wall thickness was of little or no benefit in predicting operative technical difficulty or conversion to an OC [20-26].

Surgical per-operative difficulties like stone impaction at the gall bladder neck and certain other complications are a good predictor of conversion to the open procedure, which are contrary to the findings in other studies in which stone impaction is shown to have a moderate correlation. Stone impaction at the neck or Hartman’s pouch results hindrance in holding of the gallbladder during dissection. The thickened and contracted gallbladder was difficult to dissect because it had dense adhesions with the surrounding structures and in Calot’s triangle. Removal of a difficult thick-walled inflammatory GB using the fundus first technique was found to be very useful and helpful to clearly and safely expose the anatomy of the cystic duct, cystic artery, and CBD [23,24].

From our study, we demonstrated that preoperative ultrasound examination of the GB is a good predictor of difficult cholecystectomy in majority of cases and should be used pre-operatively as a forecasting tool. The presence of complicated gallbladder, GB wall which is more than 3 mm, can give an idea of the potential difficulty to be faced in that particular patient and surgeon should be well prepared to encounter accordingly. The most valuable assessment that ultrasound can provide is gallbladder wall thickness, gall bladder size, common bile duct diameter, common bile duct stones, and any abnormal anatomy of the biliary tract, if present..