Coronary artery fistulae are rare anatomic anomalies that may be congenital or acquired. The most commonly affected vessel is the right coronary artery while origination from the left circumflex is rare. A coronary fistula creates a left-to-right shunt eventually leading to ventricular overload and congestive heart failure. Due to the low incidence of coronary fistulae, data is limited with regards to treatment strategies. We report the successful treatment of a large fistulous communication between the circumflex artery and the right atrium by proximal and distal ligation of the circumflex artery and selective revascularization of the excluded marginal branch.

A coronary artery fistula (CAF) is an aberrant connection between a coronary artery and heart chamber or major thoracic vessel that bypasses capillary beds and results in a left-to-right shunt. CAFs commonly result from congenital abnormalities but may be acquired via iatrogenic mechanisms, affecting approximately 0.002% of the general population and accounting for only 0.1% of coronary anomalies [1]. While the origin and termination sites of CAFs vary, those that arise from the left circumflex artery (LCX) are the rarest [1,2]. Treatment of CAFs is controversial. Current strategies include medical management, trans-catheter approaches, and surgical correction. The following case study discusses a symptomatic patient who was diagnosed with a fistula between the LCX and the right atrium, through the coronary sinus. A surgical approach that included proximal and distal ligation of the fistula with selective revascularization of the excluded obtuse marginal branch (OM) was chosen.

A 32-year-old otherwise healthy white male presented with a one-year history of left-sided chest discomfort occurring at exertion and, occasionally, at rest. He also experienced recurrent syncope during the previous six months. A full cardiac workup was performed. Transthoracic echocardiography revealed moderate enlargement of the right ventricle and right atrium with preserved left ventricular function. A myocardial perfusion study suggested the possibility of inferior reversible ischemia; therefore the patient underwent cardiac catheterization. The LCX appeared tortuous, dilated and gave origin to a moderate sized OM. The course of the LCX, along the atrio-ventricular groove, terminated with a large opening in the right atrium (Figure 1). 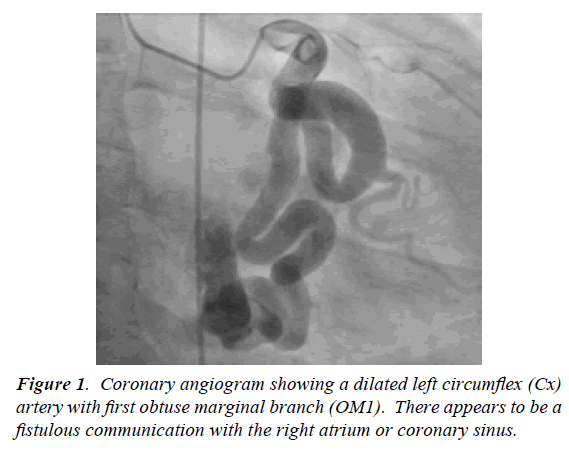 Figure 1. Coronary angiogram showing a dilated left circumflex (Cx) artery with first obtuse marginal branch (OM1). There appears to be a fistulous communication with the right atrium or coronary sinus.

A cardiac multi-slice CT scan was obtained; Sagittal and coronal images confirmed the communication of the LCX with the right atrium via the coronary sinus (Figures 2A and B). 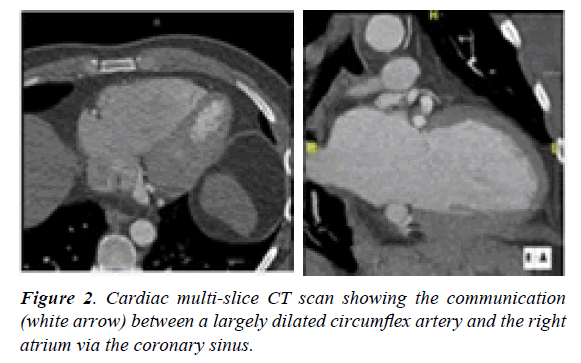 Based on the progression of patient’s symptoms and the available diagnostic findings, decision was taken to electively perform a surgical correction of the fistula. An intraoperative TEE showed a markedly dilated coronary sinus with brisk arterial flow (Figure 3). 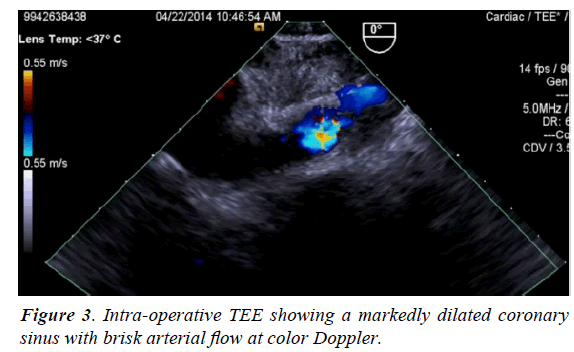 Intra-operative inspection of the tortuous circumflex artery confirmed the presence of a sizeable OM. The originating LCX was dissected and encircled with silk ties proximally and distally to the origin of the OM. Patient’s tolerance to both complete exclusion of the OM and obliteration of the fistula was tested by ligating the LCX. Within seconds, the EKG showed significant changes in correspondence of the lateral leads. We therefore elected to harvest a short segment of saphenous vein and revascularized, on-pump, the excluded OM branch (Figure 4).

Figure 4. (A) Intra-operative exposure and ligation of the dilated circumflex artery and (B) vein bypass graft to the excluded OM branch.

There were no complications peri-operatively. The patient’s postoperative recovery was unremarkable and he was discharged home within few days. At one and six months follow-up he remained symptom free.

Coronary artery fistulae (CAFs) although very rare, are among the most hemodynamically significant anomalies affecting the cardiovascular system. CAFs are due to persistence of intramyocardial primitive sinusoids or poor development of collateral branches from the involved arteries [3]. Large fistulas, under light physical exertion, may directly lead to a steal syndrome by deviating a significant fraction of the coronary flow, thus causing myocardial ischemia [4]. More commonly, however, the mechanism behind the ischemic process is represented by a decrease in flow distal to the fistula site as a result of a diastolic pressure gradient and run-off from coronary vessels to a lower pressure system. Consequently, the diameter of the involved coronary vessel expands to compensate, and eventually, the myocardium beyond the fistula becomes ischemic, resulting in dyspnea on exertion and angina. Progressive dilation may even result in aneurysm formation, thrombosis, and in some cases, rupture [4,5].

The diagnostic evaluation of CAFs varies. Transthoracic echocardiography is often used, but it is unable to delineate the anatomy of the fistula [6]. Trans-esophageal echocardiography is preferred over transthoracic echocardiography because it more accurately visualizes the origin, course, and termination sites of CAFs. However, the fact that most anomalies occur on the right side of the heart limits its diagnostic value1. The gold standard for diagnosis is coronary angiography, but ultimately lacks the ability to decipher the relation between CAFs to other structures, and the course of the fistula may not be apparent. [6] In addition, a multislice cardiac CT scan can provide a 3D image of these lesions and better delineate the communication site between cavities. Therefore, a multi-diagnostic approach is frequently suggested for patients who present with a suspected CAF.

The management of CAFs is controversial and depends on the extent of the process. In some cases, spontaneous closure may occur secondary to thrombosis. When symptoms progress, however, medical therapy alone may be insufficient. Available options include catheter based closure or surgical correction. The choice to repair the shunt depends on size of shunt, age of patient, and severity of symptoms [7]. The transcatheter approach has recently become more popular; however, success rates are variable. In approximately 7-20% of cases persistence of flow has been reported following embolization and inadequate or maldeployment has been reported in approximately 3-23% of cases [8-11]. Nevertheless, several case series have demonstrated that transcatheter embolization is an effective and reliable means of CAF treatment. The wide anatomic variability of CAFs makes it necessary that multiple embolization techniques be available. Whereas the rarity of this diagnosis, and the relatively wide variability in successful outcomes, mandates that embolization attempts are made only by those with true 11].

The goal of surgical correction of CAFs is obliteration of the fistulous communication and preservation of normal flow of the coronary vasculature. This is achieved in several ways. Common surgical techniques include external ligation of fistulous vessel, arteriotomy and suture closure of fistula, and intra-cardiac suture closure of the ostium [7]. The choice of technique depends on the origin and termination site of the fistula, presence of an associated aneurysm or involvement of a critical peripheral arterial branch [7].

We elected to use a surgical approach based on the progression of patient’s symptoms with recurrence of syncope and congestive heart failure. The size of the shunt appeared to be a critical decision factor. Moreover, we elected to test intra-operatively the coronary reserve of the obtuse margin by temporarily excluding the coronary branch depending on the largely dilated LCX. The ischemic changes observed with proximal and distal ligation of the fistula lead to the need to re-perfuse the excluded myocardium with a single vessel bypass and excellent recovery of the patient. 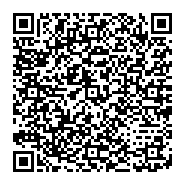