Introduction: Desmoid tumors occur rarely in the general population, approximately 0.03% of all neoplasms and less than 3% of all soft tissue tumors. It is estimated that there is an incidence of spontaneous formation of 2 to 4 per million per year. Clinical case: A 21-year-old female patient referred to the outpatient clinic for a left-sided iliac fossa tumor for a year of slow-growing progression and currently causes pain on the middle and deep palpation. The physical examination shows a spindle-shaped tumor in the left iliac fossa, painful to the deep palpation and above the iliac bone. Ultrasound is obtained, which reports tumor in soft tissues of the abdominal wall in the right hypogastrium. Laboratory tests are requested which are normal and is involved for excision of the tumor which is preperitoneal located in the posterior abdominal aponeurosis which is completely removed. The histopathology report diagnoses fibromatosis. The patient is discharged without complications. Discussion: Musculoskeletal fibromatosis comprises a wide range of lesions with a common appearance. These can be divided into two main groups: superficial and deep. Surface fibromatosis is typically small, slow-growing and includes palmar fibromatosis, plantar fibromatosis, juvenile aponeurotic fibroma, and the infant digital fibroma. Deep fibromatosis is generally large, rapidly developing, and more aggressive. These include infantile miofibromatosis, colli fibromatosis, extra abdominal Desmoid tumor and aggressive childhood fibromatosis.

Desmoid tumors (DsT) occur rarely in the general population, approximately 0.03% of all neoplasms and less than 3% of all soft tissue tumors. It is estimated that there is an incidence of spontaneous formation of 2 to 4 per million per year [1].

These are a rare type of aggressive local fibrous tumors with a tendency to recur, they can also be found intra abdominally, in the abdominal wall or extra-abdominal, which can cause complications by compression or invasion to neighboring structures and can even abscess So that its management can range from simple observation to local treatment such as surgery, radiation therapy or with conventional management with chemotherapy and/or agents with molecular direction [2]. They are slow growing and with low potential for recurrence [3].

These tumors have a very high risk of being present in patients with familial adenomatous polyposis and can develop in these from 10 to 25%. They are also known as true neoplasms but with a normal telomeric length (ends of chromosomes) and with telomerase activity (a ribozyme that carries an RNA template to synthesize telomeric DNA in the chromosome). Surgery is a reasonable treatment as a first line of treatment in abdominal wall tumors, similar management in our patient, although there is a risk in the intra-abdominal tumors that will require another type of surgical management [4].

A 21-year-old female patient attending the outpatient general surgery clinic who referred left iliac fossa tumor for a year of slow-growing evolution and currently causes middle and deep palpation pain. Physical examination shows a spindle-shaped tumor in the left iliac fossa, painful to the deep palpation and above the iliac bone. Ultrasound is recorded, which reports a tumor in soft abdominal wall tumors in the right hypogastrium. Preoperative laboratory tests are requested, which are normal and surgically for excision of the tumor, which is preperitoneally located in the posterior abdominal aponeurosis, which is completely removed. The histopathology report reports a 6 × 5 × 5 cm tumor, gray, irregular brown surface intermixed with skeletal striated muscle. The cut is smoked and granular with a diagnosis of fibromatosis. The patient is discharged without complications. The patient is asked to perform colonoscopy to rule out colon polypoid disease (Figures 1-5). 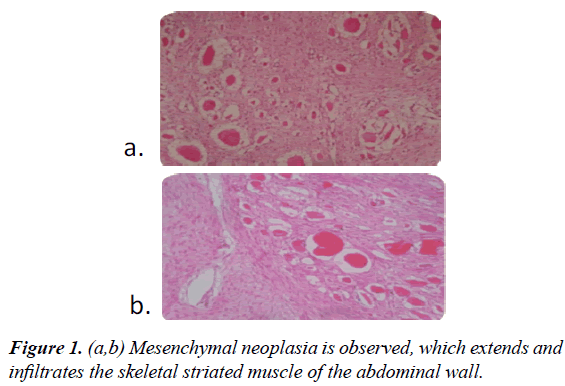 Figure 1: (a,b) Mesenchymal neoplasia is observed, which extends and infiltrates the skeletal striated muscle of the abdominal wall. 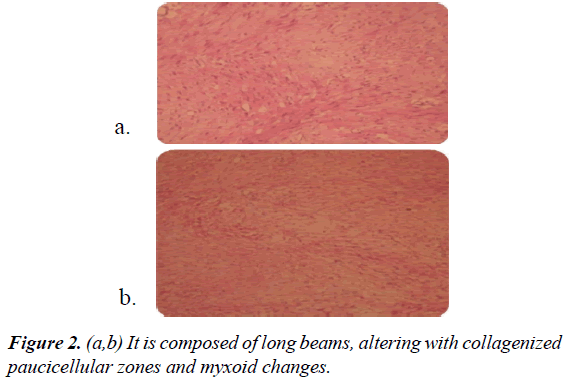 Figure 2: (a,b) It is composed of long beams, altering with collagenized paucicellular zones and myxoid changes. 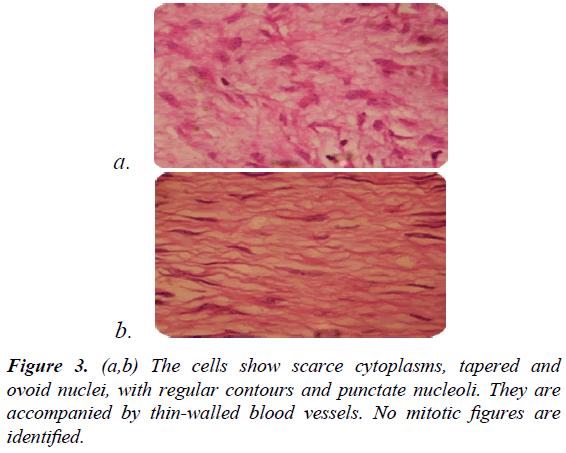 Figure 3: (a,b) The cells show scarce cytoplasms, tapered and ovoid nuclei, with regular contours and punctate nucleoli. They are accompanied by thin-walled blood vessels. No mitotic figures are identified. 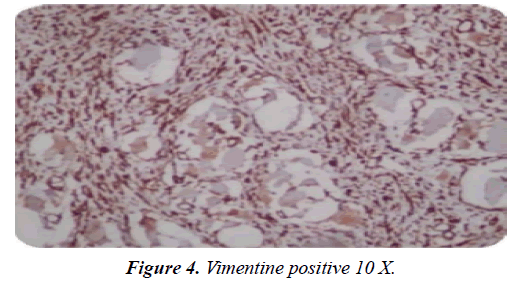 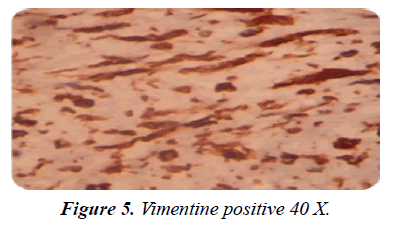 X-rays may reveal a nonspecific mass of soft tissues and calcifications are common only in juvenile aponeurotic fibroma. US, CT scan and MRI can demonstrate the extent of the lesion. Involvement of adjacent structures is common, reflecting the pattern of frequent infiltrating growth in this type of lesion.

MRI can show low to intermediate characteristic signals and low intensity bands representing highly collagenized tissue. However, fibromatoses with less collagen and greater cellularity may not be specific in T2-weighted images [5].

On the other hand, Ds T are frequent in patients with familial adenomatous polyposis with an incidence of 3.5 to 32% and an incidence up to 29% in the original Gardner syndrome. This syndrome is a subtype of familial adenomatous polyposis characterized by a high presentation of Ds T, colonic polyps and extra abdominal tumors, including cranial osteomas, thyroid cancer epidermoid cysts, fibroids and sebaceous cysts.

Ds T can develop anywhere in the body and usually occur in both intra-abdominal and extra abdominal locations. The most frequent localization is in the extremities, the abdominal wall (as in our case) and intraabdominal and mesenteric. Depending on the localization, these tumors tend to infiltrate adjacent organs extending through the fascial planes and may compromise the vascular and neural packages causing severe symptoms such as intestinal obstruction and/or intestinal ischemia. The biological behavior of DsT, as well as their growth and rates of recurrence, age and sex are unpredictable. Local recurrence rates for intra-abdominal tumors are higher than reported extra intestinal tumors which are from 57% to 86% of cases. The natural history of DsT remains poorly understood [5].

As for the symptomatology patients can usually complain of pain somewhere in their body and even when the tumors are extra intestinal they can be palpated and when they are performed diagnostic ultrasound this can reveal a spindle form especially in the intramuscular DsT besides Hyperechoic areas and a fibrillar pattern within the DsT that are characteristic of an ultrasound [6].

In MRI, homogeneous isointensity or mild hyperintensity can be observed in T1-weighted images and heterogeneous high signal in T2-weighted images or STIR. In that study all lesions were improved after gadolinium IV, usually avidly there. In contrast to previous reports, 38% of the cases did not show a low signal in all pulse sequences and no abnormalities were observed in local bone structures. Histology showed bundles of soft spindle cells in dense collagen. Patients referred for recurrent disease were more likely to have recurrence after surgery. MRI and pathological findings did not predict recurrence [7].

Aggressive fibromatosis (AF) or DsT is a rare condition, characterized by deep invasion of tissue by a monoclonal tumor or fibroblast neoplasm, developed from aponeurotic muscle structures and surgery is the treatment of choice, but the negative margins can hardly be achieved in large tumors, and can lead to greater functional disability. Medical therapy for AF includes non-steroidal anti-inflammatory drugs and tamoxifen, with inconsistent results. Several reports on the efficacy of imatinib in AF appear in the literature [8].

Although extra abdominal fibromatosis does not express alpha estrogen receptors, there appears to be almost uniform expression of beta estrogen receptors. This finding clarifies discrepancies in the literature on the expression of estrogens in fibromatosis, and provides a biological mechanism for the action of antiestrogenic compounds in their treatment. Thus, estrogen antagonists may play a role in the treatment of refractory or recurrent intraabdominal fibromatosis [9].

On the other hand, imatinib mesylate has also been reported to have activity against DsT. The relative novelty of this agent and the lack of long-term toxicity data should encourage its use only in the rescue phase in which established local and systemic approaches do not control the disease. In addition, the use of imatinib mesylate in the treatment of this neoplasm should be in the context of a formal prospective clinical trial [10].

It is known that surgery has historically been the standard treatment but has local recurrences and poor functional results, which has been proposed medical treatment including NSAIDs, hormone therapy, cytotoxic chemotherapy and agents directed against the tumor [11].

As for the nuclear expression of ß-catenin can predict the efficacy of treatment with meloxicam in patients with sporadic Desmoid tumors [12].

Regarding percutaneous cryoablation for extra abdominal TD, this seems to be safe and effective in the management of these patients [13].

Regarding the recurrence of these tumors after having been surgically operated, in one study this was 35% with an average time of 17 months. When the disease recurs, age is important especially in the >40 years and with tumor-free surgical margins for better results. And finally, immunohistochemical markers are a valuable tool for the diagnosis of TD, although they have limited potential for the prediction of final results [14].

In our case, no genetic or endoscopic study was performed because it is a public hospital that lacks these services to support the diagnosis and treatment or oncology service. On the other hand, the evolution of the patient has been satisfactory and has regular follow-up in the general surgery service by the attending physician.