Method: A total of 45 cases operated on for Non-Small Cell Lung Cancer invading the chest wall (NSCLC) were followed-up for five years. The effects of factors such as depth of tumor invasion of the chest wall (parietal pleura, extra pleural fatty tissue, intercostal muscles, and rib involvement), perinodal involvement, “N” involvement, surgical margin of the resection, and adjuvant chemotherapy on prognosis and survival were evaluated.

Results and Discussion: The number of males and females among the cases was 38 (84%) and seven (16%), respectively, with a mean age of 55 ± 8 years (42-74). Chest wall resection and extra-pleural resection was performed in 36 (80%) and nine (20%) cases, respectively. In the multivariate analysis, factors positively affecting survival were depth of invasion, tumor dimension less than 5 cm, N0 lymph node status, complete resection, and complete adjuvant chemotherapy. Full-thickness resection of the chest wall was an important prognostic factor for long-term survival in all patients with NSCLC invading the chest wall.

Conclusion: The stage of the tumor and histopathological factors such as lymphatic involvement, extrapleural invasion, and rib invasion have been shown to gain importance in improvement of survival, in addition to advancements in surgical techniques. Although there is no consensus on the surgical approach in presence of chest wall invasion, we suggest that “en bloc” resection should be preferred to extra-pleural resection.

Invasion of the parietal pleura or chest wall is detected in 5-8% of patients operated on for lung cancer [1]. Chest wall invasion was regarded as a criterion of inoperability before 1947, while Coleman reported in that year that performing chest wall resection in addition to lung resection is possible and may result in a better survival [2]. Surgery is an important part of the multimodal treatment most of the time. However, the type of resection is debatable in presence of chest wall invasion. Even limited invasion of the parietal pleura constitutes an indication for en bloc thoracic wall resection for many surgeons, while according to others; pleural striping is adequate against the possibility of increased local recurrence. The main factor determining the prognosis is distant metastasis rather than local recurrence [3]. The current study evaluated the prognostic factors following lung and chest wall resections in cases with Non-Small Cell Lung Cancer (NSCLC) with chest wall invasion.

A total of 45 patients were operated on for NSCLC with chest wall or parietal pleura invasion between January 2005 and July 2010 at the chest surgery divisions of our clinics. No surgical treatment was performed in cases with severe pulmonary failure, unstable angina pectoris, or congestive heart failure. Patients with abnormal pulmonary function tests (FEV1<60%, DLCO<60%) were evaluated with lung perfusion scan and cardiopulmonary tests and the patients who were found suitable were operated on.

All patients were evaluated using thoracic Computed Tomography (CT), fiber optic bronchoscopy, respiratory function tests, and Positron Emission Tomography (PET-CT). Mediastinoscopy was performed in the presence of a suspicious lymphadenopathy according to PET-CT or a mediastinal lymphadenopathy with a short diameter of more than 1 cm according to the thoracic CT. Induction chemotherapy was started in two patients.

All patients underwent posterolateral thoracotomy. Extra-pleural resection was performed in nine cases (20%) according to the intraoperative finding of limited invasion up to parietal pleura, confirmed by frozen section examination. Chest wall resection was performed in 36 cases (80%) due to the finding of presence of extended invasion through the parietal pleura and up to the chest wall. Chest wall resection was performed so that a tumor free tissue of 4 cm was included in the resection and the resection included one healthy rib each at the upper and lower margins according to the localization of the invasion. In two cases, healthy tissue measuring approximately 2 cm was included in the rib that was close to the vertebra. It was accepted as complete resection when no macroscopic or microscopic tumor was present at the resection margins and incomplete resection when macroscopic or microscopic tumor was present at the margins.

Patients who died up to 30 days after the operation were included in the operative mortality group. Cases were followed-up at the outpatient clinic every three months in the first year after the operation, every six months during the second year, and annually starting from the third year postoperatively. Patients were evaluated with physical examination, routine biochemical tests, PA chest x-ray, and thoracic CT at follow-up visits. Related organs were examined in cases with the suspicion of a metastasis. Follow-up of the cases was terminated in June 2015.

For statistical analysis, postoperative survival was calculated using the SPSS 7.5 program and Kaplan-Meier and log-rank tests. Cox regression analysis was used to calculate the effects of the variables on survival and p<0.05 was accepted as significant.

Among the cases, 38 were males (84%) and seven were females (16%) with a mean age of 55 ± 8 years (range: 42-74). Localization of the tumor was the right lung in 28 (62%) cases and the left lung in 17 (38%) cases. Chest wall resection (en bloc) (80%) and extra-pleural resection was performed in 36 and nine cases (20%), respectively. Local recurrence was found in four of all cases, two of them had undergone extra-pleural resection. The cases in which recurrence in the chest wall was detected underwent reoperation (incomplete resection=2). One of those cases was N2 positive. The remaining two patients were those with resection, including approximately 2 cm of healthy tissue in the rib close to the vertebrae. Local recurrence was found in those two cases. They were directed to chemoradiotherapy since a simultaneous brain metastasis was found in one of them and the other was pathological stage IIIA with N2.

Pneumonectomy and lobectomy were performed in 13 (29%) and 32 (71%) patients, respectively. According to the cell type, 26 cases had epidermoid carcinoma (59%), 13 cases had adenocarcinoma, three had large cell carcinoma (6.5%), and three had undifferentiated carcinoma (6.5%). Pathological stages of the operated cases were Stage IIB in 27 cases, Stage IIIA in 14 and N2 Stage IIIA in four cases. Survival by stage was as follows: five-year survival was 38%, 27%, and 0% in Stage IIB, IIIA, and IIIA N2, respectively (Table 1). Except for the four cases with N2, survival was statistically similar in the groups with stages IIB and IIIA (p=0.72).

Table 1: Average survival and 5-year survival rates according to pneumonectomy and lobectomy. 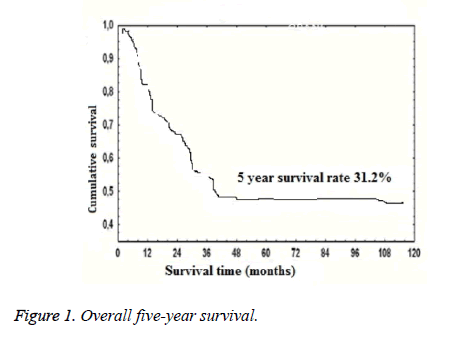 Tumor histology, differentiation, neoadjuvant therapy, type of neoadjuvant therapy, and diameter of resection did not have an effect on survival. Survival was statistically significantly better in cases that received adjuvant RT and/or chemotherapy compared to the cases who did not receive those therapies.

Chest wall invasion is associated with a high morbidity and mortality in en bloc resections and chest wall reconstructions; therefore, preoperative detection of the condition is important. Kawaguchi et al. reported that mean survival was 46 months in 532 patients with chest wall invasion among 11,663 patients with lung cancer [4]. The most important CT findings of pleural involvement are bone destruction or presence of a mass in the chest wall [5]. However, since it does not demonstrate invasion directly, it is difficult to predict pleural involvement by CT [6]. Three-dimensional thoracic CT was used in the preoperative evaluation of the chest wall invasion in the present study. Thoracic wall invasion was detected correctly in all but two patients by the imaging method. In the remaining two patients, invasion was considered to be positive since the tumor was found to adhere the chest wall tightly.

Chest wall invasion in NSCLC, once considered as a contraindication for surgery, is currently considered to carry a good survival with an acceptable operative mortality [7]. Nevertheless, various factors affect long term survival in such cases. These factors are completeness of the resection, lymph node status, histopathological stage, and the extent of resection [8].

In the 45 cases in this present study, local recurrence was found in four patients, although the surgical margins were negative. Two cases underwent extra-pleural resection and reoperations were performed on these two cases with detection of recurrence in the chest wall (incomplete resection=2). N2 was positive in one of those cases and they were referred for chemotherapy. In the remaining two patients, approximately 2 cm of healthy tissue was resected in the rib close to the vertebrae. Local recurrence was found in the two of the cases. They underwent chemoradiotherapy since one of them had simultaneous brain metastasis and the other was pathological Stage III A with N2.

When performing a chest wall resection, a healthy tissue in the lateral side should be resected as much as possible, in addition to one upper and one lower rib together with the invaded rib [10]. A tight adherence to the chest wall suggests intrathoracic fascia is passed and chest was invaded and requires a chest wall resection. Santos et al. in their patients with lung cancer and endothoracic facia invasion reported that “bird cage resection” was less aggressive and resulted in similar morbidity and mortality when compared to en bloc resection and that it did not negatively affect the patients in terms of curative results [11]. Treatment in tumors adhered to the parietal pleura is debatable. Malignant invasion of the parietal pleura is clinically difficult to differentiate from fibrosis due to inflammation. Some authors demonstrated that the long-term patient survival following extra-pleural excision was similar to the survival following chest wall excision in tumors involving only the parietal pleura [7-12]. However some other authors [13-15] observed a high incidence of positive histological margin following extra-pleural excision and reported that survival following en bloc resection was significantly better compared to extra-pleural excision of these lesions.

In the present study, survival was better in rib involvement compared to other levels of invasion. No tumor remnants could be seen in the intercostal muscles with frozen section in any of the nine cases received extra-pleural dissections with the suspicion of parietal pleural involvement. In the present study, rib involvement was found to result in better survival rates compared to parietal pleural involvement; however, it was not statistically significant (p=0.150).

There is no consensus on the administration of adjuvant radio-chemotherapy in cases with chest wall resection. Postoperative adjuvant Radiotherapy (RT) has been suggested in “N” involvement or in cases of R1, while chemotherapy (ChT) has been suggested in “N2” cases [24]. In many studies, RT was reported to have no effect of survival [7,8], while Patterson [25] and Facciolo [24] reported that survival was better in cases with the administration of postoperative adjuvant RT, though not significant. The five-year survival rate in patients who completed the adjuvant chemotherapy was higher in cases who did not receive it [20]. Similarly, in the present study, a significant difference was found in survival in patients who received and did not receive adjuvant RT and/or ChT (p<0.004).

Operative morbidity developed due to pneumonia in one case in which a pneumonectomy was performed (n=1; 2.2%). Voltolini et al. reported a 30 day mortality rate of 4% [3]. In that study, causes of mortality were detected as bronchopleural fistula and myocardial infarct.

Nodal state, depth of invasion, and adjuvant chemotherapy are prognostic factors for long-term survival in patients with NSCLC with chest wall invasion. Although there is no consensus on the type of resection to be performed in non-small cell lung cancer, “en bloc” resection should be preferred over extra-pleural resection.

The authors declared no conflicts of interest with respect to the authorship and/or publication of this article.

The authors received no financial support for the research and/or authorship of this article.