Objective: To discover the role of MCPH1 in the DNA double-strand damage induced by ionizing radiation and the relationship with H2AX in esophageal cancer cell ECA109.

Results: 1. Successfully constructed the ECA109 cell line with silence H2AX gene. 2. Ionizing radiation could cause r-H2AX and MCPH1 protein expression increase, as the same as nuclear focus increase of r- H2AX and MCPH1. 3. The protein level and nucleus focus of r-H2AX and MCPH1 are significantly reduced in ECA109 after silence H2AX.

Esophageal cancer cell line ECA109 was bought from Genechem (Shanghai). Cells were cultured in RPMI-1640 medium plus 10% FBS, 100 U/ml penicillin and 100 μg/ml streptomycin in a glass flask. Cells were maintained in humidified 5% CO2/95% air at 37ºC and subcultured every 2 to 3 d.

Lentivirus-mediated H2AX RNAi vector containing shRNA sequence was from Genechem. After transfection with viral vector or control vector, 5 μg/ml puromycin was added to the medium for 72 h for cell selection. Then transfection efficiency was observed by fluorescence microscopy. Cells were subcultured, and RNA and protein were extracted at the 1st, 5th, and 10th generation, respectively. Then RT-PCR and Western blot were used to measure the H2AX silencing efficiency. The primers are as follows: upstream primers: 5' CAGTGCTGGAGTACCTCAC 3'; downstream primers: 5' CTGGATGTTGGGCAGGAC 3'.

6MV-X Siemens linear accelerator at a dose rate of 2 Gy/min was used. Compensation film was put at 5 cm underneath the flask, and cells with or without H2AX silencing were exposed to 8 Gy at a field of 20 × 20 cm size and 100 cm source-skin distance at room temperature. After 1 hour of radiation, total protein was extracted and stored at -20°C. Coomassie brilliant blue assay was used for quantification of proteins.

Sample preparation: 20 μg protein from ECA109 cells after radiation was mixed with 4X loading buffer at 3:1. Then samples were centrifuged, boiled at 100°C for 5 min, and cooled down for use.

20 μg protein samples were separated by 12% or 10% separating gel and wet-transferred to a PVDF membrane. After being blocked with 5% fat-free milk in TBST for 1 hour at 37°C, the membrane was incubated with primary antibody (anti-γ-H2AX 1:1000, anti-MCPH1 1:200, anti-GAPDH 1:500) at 4°C overnight. Then the membrane was washed 4 times for 10 min each in TBST buffer and incubated with fluorescence labeled secondary antibody at 37°C for 1 h, avoiding exposure to light. After 4 times’ washing for 10 min each in TBST buffer, the membrane was scanned by infrared imaging system. The protein expression level was measured by quantification of Optical Density (OD) of each band.

Cells kept in log phase were digested with trypsin and resuspended at 1 × 106/ml, and then 100 μL cell suspension was seeded into a new dish, with another 2 ml of fresh medium. Cells were maintained in an incubator at 37°C for 24 h and exposed to the ionizing radiation for 1 h. After washing 3 times with PBS, cells were fixed with 4% PFA for 15 min. Then the fixative was discarded and cells were washed with PBS 3 times for 10 min each with gentle shaking. Cells were permeabilized with 0.5% Triton X-100 3 times for 5 min each and washed in PBS 3 times for 10 min each, again with gentle shaking. Then the samples were blocked with goat serum for 1 hour and further incubated with primary antibody (anti-γ- H2AX 1:100, anti-MCPH1 1:100) at 37°C for 2 h. After washing 3 times in PBS with gentle shaking, cells were exposed to Cy-3 labeled goat anti-rabbit secondary antibody (1:100) containing DAPI (1:2000) for 2 h at 37°C in a wet box. Then the unbound secondary antibody was removed by washing 3 times for 10 min each with PBS with gentle shaking, and slides were mounted with mounting medium and visualized in a Nikon ECLIPSE E800 microscope.

ECA109 cells with or without H2AX silencing were exposed to 8 Gy for 1 h, and total protein was extracted. 80 μg protein was incubated with 3 μL anti-γ-H2AX, anti-MCPH1, anti- H2AX rabbit antibody or rabbit IgG negative control, 2.5 μL PMSF, and enough IPH to bring the total volume to 250 μL. After 1 hour of incubation at 4°C, 20 μL protein A beads were added into the protein-antibody reaction system and incubated overnight at 4°C. After centrifugation at 12000 rpm for 3 min at 4°C, supernatants were discarded and 400 μL IPH was added into the IP reaction system; the tube then was rotated for 20 min at 4°C. This washing step was repeated 4 times. Then centrifugation was performed at 12000 rpm for 3 min at 4°C, and supernatants were discarded as much as possible. 10-15 μL 2X buffer was added into the beads and mixed gently. Then the beads were boiled for 5 min and centrifuged at 12000 rpm for 1 min at room temperature. The supernatant was subjected to Western blot, and expression levels of γ-H2AX, MCPH1, and H2AX were detected.

The statistical analysis was performed using SPSS17.0 software. The results were shown as mean ± SD (x̄ ± SD). One-way ANOVA was used to compare the difference between groups. 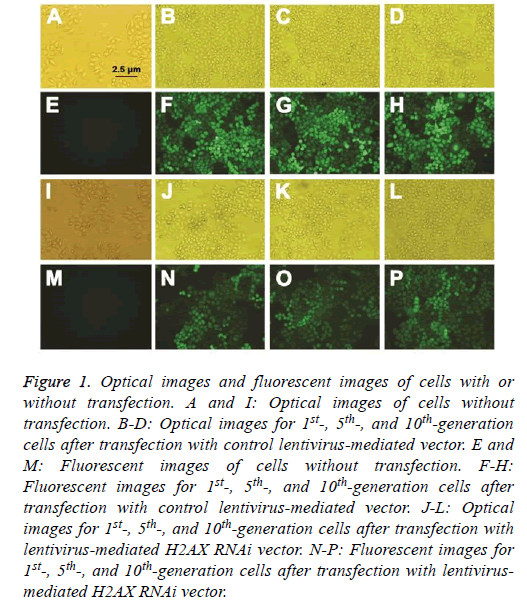 As shown in Figure 2, stable low-level expression of H2AX could be maintained for up to 10 cell generations after transfection. 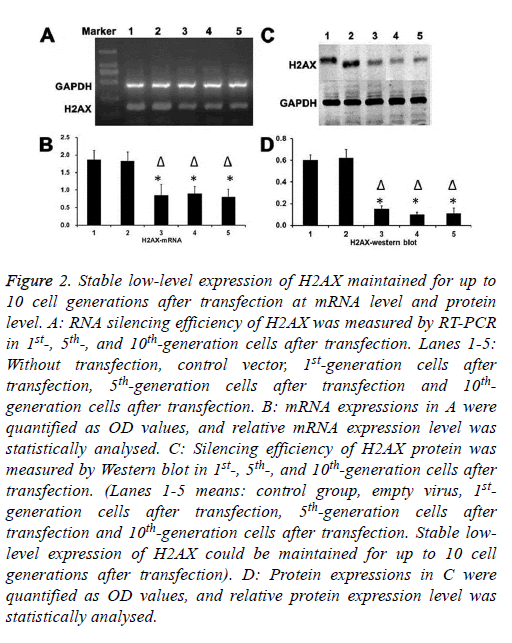 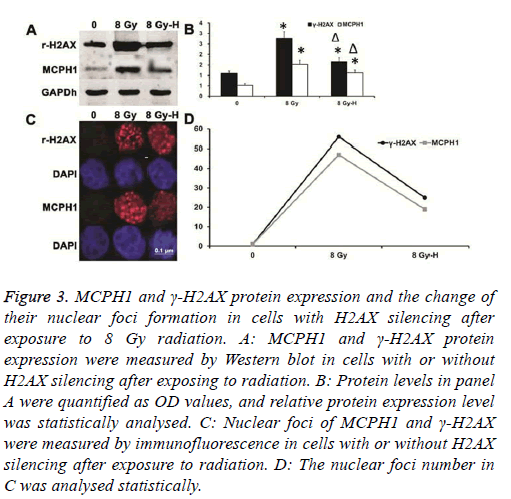 Interaction of H2AX, γ-H2AX and MCPH1 was analysed by co-immunoprecipitation

As shown in Figure 4, when cells were not exposed to radiation, there was no interaction between H2AX, γ-H2AX, and MCPH1. After ionizing radiation, the MCPH1 interacted with γ-H2AX but not H2AX. Moreover, this interaction was attenuated after silencing H2AX.

Figure 4: The interaction of H2AX, γ-H2AX, and MCPH1 was analysed by co-immunoprecipitation.

The consequences when MCPH1 was knocked out with RNAi have been described in some reports [9-12]. In our study, there was no interaction between MCPH1 and phosphorylated H2AX (γ-H2AX) without ionizing radiation treatment, while after radiation, MCPH1 interacted closely with γ-H2AX. When silencing H2AX, the interaction weakened. Moreover, both the γ-H2AX foci formation in nuclei and the up-regulation of its expression induced by ionizing radiation decreased when silencing H2AX. Accompanying it, the number of MCPH1 foci decreased and protein expression declined. All these results suggested that MCPH1 was located in the damage response downstream and regulated by H2AX.

MCPH1 is very important to brain development and tumor suppression. One of the recent studies showed that MCPH1 was not heterozygous and was abnormally expressed in breast cancer [11]. More research on MCPH1 knockout mice will help in identifying whether MCPH1 is a tumor suppressor. If MCPH1 could be gradually applied to clinical trials as a tumor suppressor in the future, it may provide relief for patients and help reduce the incidence of the disease. Thus, as a potential tumor suppressor, there is great significance in continuing research on MCPH1.

This study was supported by Province Natural Science Foundation of Hebei (H201501143) and Hebei University Medical Discipline special fund construction projects (2014B1001) and Key Research Fund in Affiliated Hospital of Hebei University (2015Z001) and the key laboratory project of tumor radiotherapy and chemotherapy mechanism and regulation in Hebei province.