Evaluation of solid pseudopapillary tumor of the pancreas: one tertiary center experience

Solid Pseudo-Papillary Neoplasia (SPN) is the rare tumors of the pancreas. The aim of the current study is documentation of the data of the patients. The data of patients with pancreatic neoplasm were presented to Gastroenterology Department between 2010 and 2014 were evaluated retrospectively. A database of the characteristics of these patients was developed, including demographic, laboratory, radiological, surgical and pathological features and the immuno-histochemical staining of tumor specimens. Analysis of 323 patients diagnosed with pancreas malignancies in our hospital between 2010 and 2014 demonstrated that 5 patients (1.5%) were diagnosed with SPN. Of these five patients, four were females and one was male. Their average age was 27 (range: 16-50). CA 19-9 levels were normal in four patients while slightly increase in one (60 U/mL (0-33)) and there were the other tumor markers under a normal range 5-10.3 cm diameter in size, mean: 7.6 cm. Immunohistochemical analysis demonstrated that CD10, CD56, Ki-67 and β-catenine was positive for all patients while other markers were variable. Progesteron and estrogen receptors were positive in histo-pathologic specimens of four patients. SPN is a rare tumor that develops principally in young women and has a good prognosis. Immunohistochemical staining is important in the differential diagnosis of SPN and estrogen positivity may have a role in pathogenesis of a limited patients.

Solid Pseudopapillary Neoplasia (SPN) of the pancreas is a neoplasm with a low malignant potential, usually affecting young women in the second or third decade of life [1]. First reported by Frantz in 1959, it is an uncommon but distinct pancreatic neoplasm, constitutes only about 5% of cystic pancreatic tumors and about 1 to 2% of exocrine pancreatic neoplasms [2-5]. There is an increase of incidence of the disease with widely availability of imaging systems and better understanding of its pathology.

Data in regard with the disease were scarce. We aimed in the current study is to analyze the data of the patients diagnosed with SPN, to evaluate them in connection with other cases previously reported in the literature and to discuss the management of SPN as a rare entity.

Five patients who were diagnosed and treated for SPN at the Gastroenterology Department of Bezmialem Vakif University between 2010 and 2014 were evaluated retrospectively. A database of the characteristics of these patients was developed, including age, gender, symptoms, duration of symptoms, tumor location (data were from radiological investigations or surgical record) and size (data were from radiological investigations or surgical record and finally confirmed by pathology), metastasis or invasion of adjacent tissues (data were from radiological investigations or surgical exploration, and finally was confirmed by pathology), histopathological and immunohistochemical features, treatment (data were from the record of therapy, including the types of surgery) and followup. In addition, comorbidities, hepatic function test, amylase, lipase values, tumor markers (α-Fetoprotein (AFP), Carcino- Embryonic Antigen (CEA), Carbohydrate Antigen (CA) 19-9, CA-125) was also documented. Imaging results of all patients (Ultrasonography (USG), Computed tomography (CT), Magnetic Resonance (MR)) and preoperative Endoscopic Ultrasonography (EUS)-Fine Needle Aspiration (FNA) were evaluated.

The retrospective analysis of 323 patients diagnosed with pancreas malignancies in our hospital between 2010 and 2014 demonstrated that 5 patients (1.5%) were diagnosed with SPN. Of these five patients, four were females and one was male. Their average age was 27 ± 14/y, (range: 16-50). All patients had abdominal pain and discomfort while three patients had only nausea/vomiting and one had palpable abdominal mass. One patient had varicosele and one had hypertension as concomitant conditions while others had none. All patients’ hepatic function tests and amylase/lipase measurements were normal.

Likewise, all patients CEA, CA 125, AFP values were normal. CA 19-9 levels were normal in four patients while slightly increased in one (60 U/mL (0-33)). Tumors of three patients were localized at the pancreas tail and at the head in two patients (Figure 1a). Extrahepatic involvement was not observed for any of the patients. Tumor diameters ranged between 5 cm and 10.3 cm, with an average diameter of 7.6 cm (Table 1). 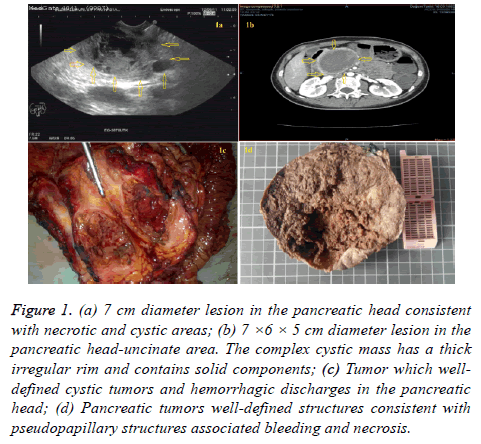 Abdominal CT and MR demonstrated typical features of SPN for only two patients (Figure 1b). Four patients underwent EUS-FNA while one patient had no EUS. Two of the four patients who had undergone EUS-FNA were diagnosed with SPN, one patient was misdiagnosed (ependymoma) and one patient did not receive any diagnosis. Of the patients who had undergone surgical intervention, one received distal pancreatectomy, two received Whipple surgery and two received distal pancreatectomy and splenectomy (Table 1).

Macroscopically, there was diffuse hemorrhage between solid and cystic areas in all patients. At histopathological examination, tumor mass was separated from pancreas with a fibrous capsula. Pseudopapillary, cystic and solid growth patterns were seen in the tumor mass. 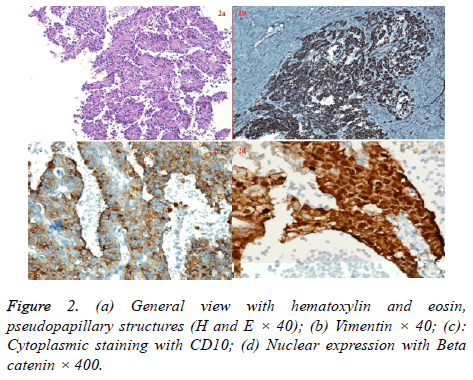 Immunohistochemical analysis demonstrated that vimentin (Figure 2b), CD10 (Figure 2c), CD56, Ki-67 and B-catenin (Figure 2d) was positive for all patients while other markers were variable.

Progesteron and estrogen receptors were positive in histopathologic specimens of four patients (Table 3). Although the average follow-up duration was 8.8 months (range: 2-21 months), all patients are being followed up without complications.

Table 3. Immunohistochemical findings of the pathologic specimens of SPN’s of 5 cases.

SPN of the pancreas is a neoplasm with a low malignant potential, usually affecting young women in the second or third decade of life [1]. SPN is very rare; in fact, it only constitutes about 5% of cystic pancreatic tumors and about 1 to 2% of exocrine pancreatic neoplasms [4,5]. The five patients in our study age between 16 and 50 y, with a mean age of 27 y, consistent with the literature [4,6,7].

The clinical presentation of SPN is usually unspecific. Most patients have unclear clinical features including abdominal pain or discomfort, poor appetite and nausea, which are related to tumor compression on adjacent organs. Pain is the most pronounced complaint in these patients [1]. In our study, all patients had abdominal pain and abdominal discomfort while two patients had additional complaints of nausea/vomiting and one had palpable mass in the abdomen. Usually there is no evidence of pancreatic insufficiency, abnormal liver function tests, cholestasis, elevated pancreatic enzymes or an endocrine syndrome. Tumor markers are also generally unremarkable [4-8]. Hepatic function tests and pancreatic enzymes were normal in all patients consistent with previous reports. One patient had moderately high levels of CA19-9, while tumor markers were of normal levels in others.

Today’s imaging techniques are helpful for differentiation of SPN from other cystic neoplasms such as serous cystadenomas, mucin-producing tumors and islet cell tumors. A well demarcated encapsulated lesion including solid and cystic components and hemorrhagic degenerations are seen by CT [9]. Following contrast material administration, enhancing solid areas are typically noted peripherally, whereas cystic spaces are usually more centrally located [10]. Cystic mass may have peripheral curvilinear calcification and solid mass have necrotic areas in it [11]. As reflecting complex nature of SPN, MRI imaging demonstrates a well-defined lesion with heterogeneous signal intensity on T1 and T2-weighted images. Blood product in the SPNs that caused by internal hemorrhage can be diagnosed by increase in signal attenuation in the T1 weighted and decrease in T2-weighted images [9]. MRI may also help in differentiation between SPNs and islet cell tumors; cystic components have moderately increased signal intensity on T1-weighted images and increased signal intensity on T2- weighted images in islet cell tumors. Increased peripheral hypervascularity is seen in the islet cell tumors but not in SPNs [10]. EUS-guided fine-needle aspiration (or percutaneous) may play an important role in distinguishing SPNs from other lesions and preoperative planning [12]. Preoperative diagnosis, however, is still a challenge despite technological advances. Combined assessment of imaging results and EUS-FNA with consideration to age and gender will facilitate establishing the diagnosis.

The origin of solid pseudopapillary tumors still remains unclear. Absence of communication with the pancreatic duct and mucinous or serous epithelium usually supported by an “ovarian” stroma are the easier differentiation elements of SPNs from cystic neoplasms, such as mucinous or serous cystic neoplasm [13]. SPNs might originate from the genital ridge–related cells that were incorporated into the pancreas during organogenesis. Morales et al. showed fast growth of SPN during pregnancy and they also demonstrated the presence of a progesterone receptor in the tumor tissue [14,15]. The growth rate of the SPN of the pancreas seemed to be enhanced by the concurrence of pregnancy. The predilection for solid-pseudo papillary neoplasm in the young woman suggests a role for sex hormones in the histogenesis or progression of this tumor; however, the anti-estrogen receptor (ER) and anti-progesterone receptor (PR) expression was not consistent in the literature. Using a binding assay, Ladanyi et al. demonstrated the expression of ER (Kd=2.82 ± 0.86 nM) in solid-pseudo papillary neoplasm and proposed that this tumor is hormone sensitive (15). However, Carbone et al. reported expression of a type of ER with a Kd=15 nM (but not the expression of the high affinity type of ER (Kd=0.1nM)) in solid-pseudo papillary neoplasms [16]. In the same report, the authors demonstrated the lack of ER expression by immunohistochemical staining and suggested that the anti-ER antibodies used in immunohistochemical studies were only specific for high affinity type ER. This assumption may explain the reported lack of ER expression in solidpseudopapillary neoplasm stained with immunohistochemistry in the literature. In our study 80% of our cases have had estrogen positivity. We suggest that positivity of estrogen may play a role in the pathogenesis of SPN although positivity and the role of estrogen controversial.

A new immunohistochemical feature of SPNs was found recently, a nuclear type of β-catenin, which were present in more than 90% of them [17]. It has been shown that, abnormal nuclear labeling of β-catenin supports the diagnosis [18]. β- catenin and Wnt signaling pathway play an important role in the tumorigenesis of SPNs [18]. By blocking the degradation of β-catenin with gene mutations (CTNNB1), the β-catenin- Tcf/Lef complex activates the transcription of several oncogenic genes, including c-myc and cyclin D1 in the nucleus [13]. It has been shown that, β-catenin activation in mice induces large pancreatic tumor resembling human SPN [13]. Aggressivity may be decided by presence of extensive necrosis, nuclear atypia and high mitotic rate, immunohistochemistry findings of expression of Ki-67 and sarcomatoid areas in SPNs and about 15% of the SPNs metastases mostly to the liver, regional lymph nodes, mesentery, omentum and peritoneum as well as adjacent organs [4,19]. There was no metastatic lesion in our patients.

Radical resection is the treatment of choice for SPNs even with metastasis or local recurrence. Distal pancreatectomy combined with or without splenectomy can be performed for pancreatic body and/or tail tumor, and pancreatoduodenectomy for pancreatic head tumor. Martin et al. reported that four patients underwent resection of liver metastasis and primary tumor, and two of them survived for at least 6 and 11 years, respectively [3]. Other treatment modalities for liver metastasis, such as alcohol injection, transarterial chemoembolization, γ-radiation therapy and even liver transplantation, have been reported [21]. The role of chemotherapy and radiotherapy in treatment of SPN is poorly defined at present, since only few reports are available on them [4]. The prognosis of SPN patients even with local recurrence and metastasis or invasion is good. SPN is limited to the pancreas in over 95% of its patients and can be radically resected [7]. Its local recurrence rate is less than 10% and usually occurs within 4 years after surgery [22]. Recurrence, local invasion, and limited metastasis are not contraindications for resection, and some patients with “unresectable” SPN may also have a long survival time [23]. It has been reported that the overall 5-y survival rate of SPN patients is about 95% [20].

SPN is a rare tumor that develops principally in young women and has a good prognosis. There is an increase in the rate of diagnosis parallel to technological advances. Surgical intervention should be undertaken as the first choice because it is considerably curative.