Tuberculosis is an ancient human scourge that continues to be an important public health problem world wide. The risk of increasing spread of tuberculosis and development of drug resistance make early diagnosis a matter of utmost concern. The significance of serum ADA levels in the diagnosis of tuberculosis is known. However there is hardly any study literature that compares the serum ADA level during the treatment of the disease. Te objective of the study was to evaluate the effectiveness of Serum ADA in prognosis of pulmonary tuberculosis at different durations of the therapy in relation with other diagnostic tests of pulmonary tuberculosis. Serum ADA was measured along with other diagnostic markers during the course of treatment. The serum ADA values in the study group was (mean ± SD) 41.48 ± 8.02 U/L and in controls (mean ± SD) of 17.60 ± 5.17 U/L. After the 1st month of treatment there was no significant change(p>0.05) in serum ADA levels 39.60 ± 0.79U/L,however significant difference was recorded after the second month of treatment in serum ADA level 29.66 ± 0.83U/L and similarly at sixth month of treatment 22.12 ± 0.51U/L difference in serum ADA was significantly high. The difference in serum ADA levels between the first month and second month & first month and sixth month were statistically significant. (p<0.001, p<0.001 respectively). The measurement of serum ADA could be of significant help to evaluate the response to the therapy, particularly during second and sixth month. This may have an association with lymphocytic activation.

India is the highest TB burden country accounting for one fifth of the global incidence (Global annual incidence estimate is 9.4 million cases out of which it is estimated that 1.98 million cases are from India) [1]. India is 17th among 22 High Burden Countries in terms of TB incidence rate. [2] In diagnosis of tuberculosis, microbiologic, genetic, immunologic and biochemical methods are used [3]. The measurement of adenosine deaminase (ADA) activity is one of the biochemical methods. ADA is an enzyme that converts adenosine to inosine, and deoxyadenosine to deoxyinosine in the pathway of purine catabolism, and by this way catalyses irreversible deamination [4]. ADA acts in proliferation and differentiation of lymphocyte and especially T lymphocyte [5].However there is no study literature that compares the serum ADA level with tuberculosis categories or investigates the relation of the serum ADA levels with response to antituberculosis therapy. Therefore, this study was aimed to examine the level of serum ADA in patients undergoing anti tubercular treatment at different intervals.

Locus of the study

A total of 44 clinically and laboratory diagnosed pulmonary tuberculosis patients, who have consented to participate in the study during treatment were selected. The study and data collection were carried out with the approval from institutional ethical committee and informed consent were taken from all the study subjects. Of 44 cases 32 were males (72.72%) and 12 were female (27.27%) cases, the mean age group was 42.96 ± 15.29.

A total of fifteen normal healthy individuals (paramedical and medical staff of Navodaya medical college) aged between 20 years - 50 years [11 Males (73.3%) and 4 females (26.66%)] were selected as controls after getting their consent for participation.

Inclusion and exclusion criteria followed in the present study are as follows:

Only those freshly diagnosed pulmonary tuberculosis cases, who were willing to participate during treatment were included in the study group.

Patients with extra pulmonary TB and /or patients requiring surgical intervention, Chronic pulmonary TB (receiving at least two courses of anti-TB treatment for more than six months), and dropouts were excluded from the study group.

* p<0.05, **p<0.01, Bonferroni Multiple Comparisons Test, If the value of t is greater than 2.419 then the P value is less than 0.05.
SEM: Standard error of mean
Table 1: Serum ADA and CRP levels, ESR & peripheral blood leukocyte and lymphocyte counts at before treatment and at one, two and six months after treatment (Mean ± SEM)

There was a significant decrease in erythrocyte sedimentation rates and C-reactive protein values after the 2nd and 6th month of treatment corresponding with the serum ADA levels as shown in Figure 2. 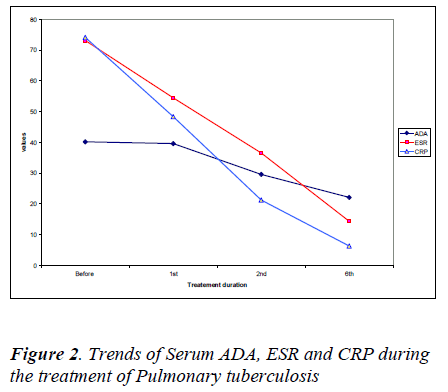 Figure 2: Trends of Serum ADA, ESR and CRP during the treatment of Pulmonary tuberculosis 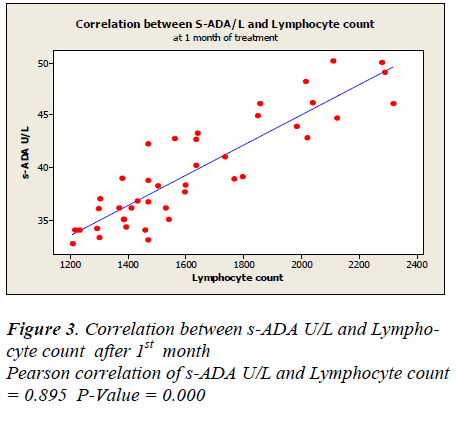 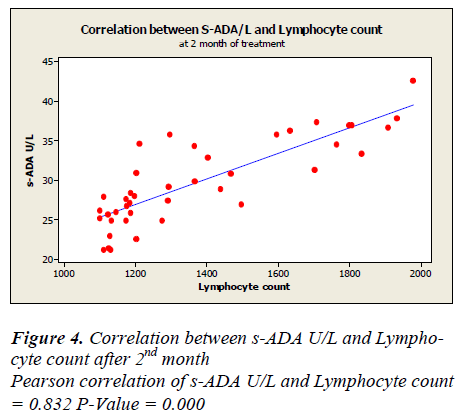 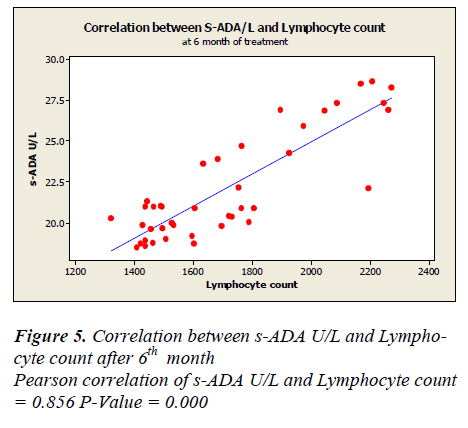 The highest level of serum adenosine deaminase in patients with pulmonary tuberculosis corresponds to the severity of the disease, high bacterial isolation, the extent of destructive and infiltrative changes in lung tissue, and endotoxemia. This indicates that ADA measurement is an additional criterion for assessing the health status in pulmonary tuberculosis patients and the magnitude of destructive processes. Moreover, the measurement is of prognostic value as it provides an objective assessment of the course of an acute progressive process and the efficiency of chemotherapy used [12].

Suzuki K et al [15] reported that the serum acute phase reactants decreased to normal levels within three to five weeks after negative results for tubercle bacilli were obtained in the sputum cultures. In addition, hematological abnormalities were observed in patients, such as normocytic normochromic anemia, leukopenia, neutropenia, and lymphcytopenia. These abnormalities reverted to normal with antituberculosis treatment [16]. Studies on lymphocyte subgroups reported that especially CD4+ T cells showed an increase after the beginning of treatment [17,18]. Callazos et al [19] was observed that a decrease in both the leukocyte and the lymphocyte counts paralleled the decrease in s-ADA levels after the first month of treatment. In our study the lymphocyte count and s-ADA levels showed a parallel course for two months. After the second month the lymphocyte count increased, while s- ADA levels continued to decrease. The levels of s-ADA showed no significant change (p>0.05) in the first month of the treatment and decreased after the second month. Perhaps this pattern is related to lymphocytic activation and/or a complex cytokine network regulating the lymphocytes. It is known that the course of the ADA level is associated not only with lymphocytes, but also some chemical mediators secreted by these cells [21]. The disease is under control after the second month, and the lymphocytes and cytokines normalize. Although lymphocyte numbers increased at the sixth month, s-ADA levels decreased. It could be thought that the patients who had lymphopenia in the beginning showed increase in lymphocyte count after the treatment and influences the change in s-ADA level. The lymphocyte counts and serum ADA levels demonstrated a parallel course in the first two months and then they had different course. CRP & ESR reduced quickly after first month of treatment. The levels of serum ADA showed decrease after first month of treatment. This decrease in s-ADA after the first month might reflect the normalization of the altered lymphocyte turnover induced by tuberculosis. Therefore measurement of serum ADA could be of significant help to evaluate the response to therapy, particularly in those patients with increased value of the enzyme.