Dental caries is a common disease and a worldwide public health concern. It affects a huge population including several rural and urban communities [1]. One of the currently available review on epidemiological data of various countries evidently showed marked rise in the prevalence of dental caries [2]. The initial indications of early carious lesion is the chalky ‘white spot ’ appearance on the tooth surface. This appearance indicates an area of demineralization of enamel and referred as an incipient carious lesion or an early carious lesion [3]. The prevalence of dental caries in developing countries affects both the adults and children in the primary or permanent teeth, and root as well as coronal surfaces. Several strategies were adopted worldwide for the prevention of dental caries such as topical fluoride application, water fluoridation, a return to school oral health educational programs, proper diet and regular dental office visits, the use of fluoride rinses, focus on proper brushing with fluoride dentifrice, and also flossing [4].

One such method of remineralization is calcium phosphate based remineralizing technique. This technique is more effective in remineralizing the early carious lesions when compared to the use of fluoride alone. Many products with calcium and phosphate are being evaluated or are available in the market for reversing or inhibiting caries. One such product is the CPP-ACP (casein phosphopeptide with amorphous calcium phosphate) complex [7]. The casein present in bovine milk is the predominant phosphoprotein, which makes 80% of the total protein. It primarily acts as a phosphate-calcium stabilized micellular complexes [8]. The sequence cluster of from casein, –Ser (P)-Ser (P)-Ser (P)-Glu-Glu, makes up the casein phosphopeptides (CPP) [2,8]. In the alkaline conditions, the phosphate-calcium exists in an alkaline amorphous state complexed with CPP and referred as CPP-ACP [9]. The CPPACP readily binds to the tooth surface and the bacteria in present plaque. The main function of CPP-ACPF (CPP-ACP fluoride) cream is stabilization of high concentrations of phosphate and calcium ions at surface of tooth by binding at plaque and pellicle. It provides a very effective mode to elevate the amount of calcium in fluid of dental plaque, which is desirable for increasing the remineralization [10].

Study design and of reagents preparation

The present in-vitro study was planned for evaluating the remineralization potential of the remineralizing agent, CPPACPF, on artificially demineralized enamel surfaces.

The artificial saliva [Wet Mouth] [ICPA] and buffered demineralisation solution was prepared from the analyticalgrade chemicals and distilled water. The artificial saliva consists of sodium carboxy methyl cellulose 0.5% w/v, glycerin 30% w/v, water, paraben and pleasantly flavored base without any essential calcium and phosphate ions. The prepared demineralisation solution consists of 2.2 mM Mono Potassium dihydrogen Phosphate (KH2PO4), 2.2 mM Calcium Chloride (CaCl2) and 0.0 5 M Acetic acid. The 1 M Potassium hydroxide (KOH) was used to adjust the pH to 4.4. Also, Rhodamine B dye (0.01 mM) was prepared by adding 23.95 mg of Rhodamine-B into 500 ml of distilled water. The remineralizing agent used for the evaluation was CPP-ACPF (0.2% or 900 ppm of fluoride concentration) [GC Tooth Mousse Plus®]. The teeth with sound enamel and dentin without any structural defects and carious lesions were included for the study. Teeth with white spot lesions, initial cavitated lesions, cracks and other external structural defects were excluded from this study.

Sample preparation and demineralization of enamel

Fifteen maxillary premolars designated for orthodontic extraction were selected for the study. The teeth were cleaned thoroughly, and any type of debris were removed. It was then stored in normal saline until further use. Next, the roots of the teeth samples were dissected using a diamond disc and hand motor. The crown part of the teeth was sectioned mesio-distally into buccal and lingual halves to obtain 30 sectioned teeth samples. A window of “4 × 4 mm” was created by sticking the sticker of same size on the centre of enamel surfaces of sectioned samples. The remaining surfaces were coated with an acid resistant nail varnish and were allowed to dry for 6 hours. After drying, the stickers were removed, and the samples were subjected to demineralization procedure by placing each tooth sample in separate vials containing 4 ml of demineralization solution for four days.

Remineralization of the demineralized samples

Each tooth sample from the study groups were sectioned labiolingually via the center of window in 2 equal halves. The first half served as the control group, the second half received the application of remineralizing agent and served as the experimental group. The experimental group received CPPACPF applications with the help of an applicator tip once daily for 4 minutes, followed by rinsing in distilled water and were stored in individual container with artificial saliva for 24 hours. This process was continued for 14 days (4, 10). After 14 days, these experimental group was stored in an individual container with artificial saliva for 1 week, 2 weeks and 4 weeks respectively. The artificial saliva was replaced every day (4, 17). At the end of Ist week (10 samples), IInd week (next 10 samples) and IVrth week (remaining 10 samples), the samples were subjected to CLSM evaluation to determine the remineralization potential.

The control and experimental group were subjected to Confocal Laser Scanning Microscopic (CLSM) evaluation to measure the baseline data of demineralization. The teeth samples from the control and experimental groups were kept in Rhodamine B dye for 24 hours. The stained sections then were placed on the microscopic glass slide with 10X objective, at 50% intensity of Argon laser illumination at 488 nM excitation wavelength. With a 515 nm long-pass filter, the confocal slits were set at 25 μm. The cross-sectional analysis of enamel lesions and the remineralized samples with CLSM is based on the digital images taken at certain controlled settings. Analysis of all samples was done with a Carl-Zeiss CLSM. The accompanied software (Image J program) calculates imagebased parameters of selected lesion zones. The data obtained were subjected to statistical analysis. The statistical tests used in this study were mean, standard deviation and one-way ANOVA test.

Remineralization potential after one, two and four weeks 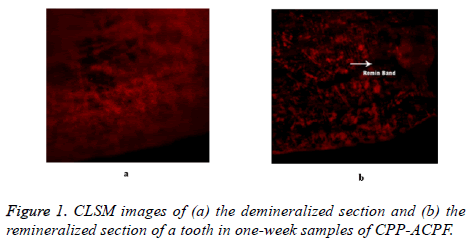 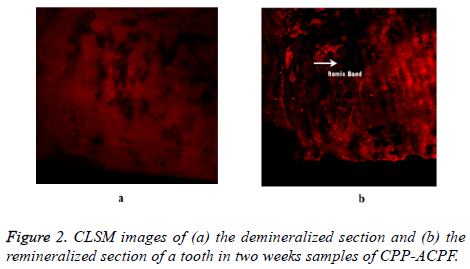 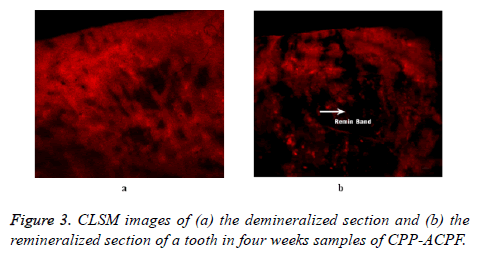 It measured the mean gray value scores of the images and was numerically interpreted. The remineralization potential of each tooth sample was measured by calculating the difference between its baseline data (demineralized value) with its counterpart remineralized value. That is;

The analysis by CLSM for the untreated sample records a near zero fluorescence with grayscale value approximately zero and is pitch black. The demineralized sample or lesions slightly auto fluoresce but the imbibition of the 0.1 mM Rhodamine dye allowed the porous demineralized layer (higher gray values) to fill and appear with significant contrast. The remineralized samples showed a reduced fluorescence (smaller gray values), which indicates less porosity and dye penetration or more mineral concentration [1,11].

The remineralization potential mean gray value scores for oneweek samples ranged from 32.644 to 71.462 with mean score of 59.1064. In two weeks samples it ranged from 47.42 to 74.145 with mean score 58.96. In four weeks samples it ranges from 11.006 to 71.721 with mean 56.95. The mean gray value scores were almost similar for one, two- and four-week samples i.e., the remineralization potential does not increase or decrease significantly with increasing time (Tables 1 and 2).

Comparison of remineralization potential within the group

The one-way ANOVA used for statistical analysis, was tested to determine whether any of the differences among the means are statistically significant. The calculated p-value, 0.915, was found to be greater than significance level (0.05) (Table 3). The analysis revealed that there is no statistically significant difference between the mean gray value response of the one, two- and four-weeks of CPP-ACPF remineralized sample. Thus indicating that there is no significant difference in the remineralization potential of one, two- and four-weeks samples.

Table 3. Comparison of remineralization potential within the CPPACPF remineralized samples

Remineralization is described as a process in which phosphate and calcium ions are supplied to the tooth via an external source. It promotes deposition of ion in the crystal voids in demineralized enamel for creating net gain of minerals. The word ‘void’ is defined as any available area in a crystal created by loss of ion from demineralization. Thus, remineralization can also be defined as crystal repair for creating net mineral gain on an enamel subsurface lesion. But it does not extend for precipitation of solid phases on enamel surfaces [12]. Many studies attempted to investigate several calcifying solutions as remineralizing agent on demineralized tooth surface or structure [13-18].

The fundamental issue in the clinical applications of phosphate and calcium remineralization system is the less solubility of calcium-phosphates, especially in the presence of fluoride ions. The single, low-concentration calcium-phosphate based remineralization system is not effective in localization of ions on the surface of tooth in substantial amount for promoting remineralization of enamel subsurface. This leads to the development or advancement of novel delivery systems based on calcium-phosphate, having high concentrations of phosphate and calcium. One such new product applying this type of delivery system is now commercially available as stabilized amorphous tooth cream known as CPP-ACPF. The manufacturer of these products claims that they provide a new avenue for remineralizing the non-cavitated caries lesions.5 This initiated the present in-vitro study for evaluating the remineralization potential of new commercially available calcium-phosphate-based remineralizing agent, CPP-ACPF, on demineralised enamel surfaces after storing in artificial saliva for periods of one, two and four weeks.

In the present study CPP-ACPF showed remineralization potential against the artificially demineralized enamel. The result was in agreement with the other previous studies on CPP-ACPF showing their remineralization potential on artificially induced initial enamel carious lesions [1,4,5,7,8,11,13-15,17,19-24]. Bhatt et al., showed in his study that CPP-ACPF exhibited significant amount of remineralization potential which was statistically significant at 21 days.4 In our study the remineralization potential of CPPACPF, decreased gradually from one-week samples to four weeks samples and the difference or decrease in this potential was not statistically significant. The possible reasons for this result may be the action of CPP-ACPF molecules which binds at the position inside the lesion of enamel subsurface and at the surface of lesion. Once it is inside the enamel subsurface lesion, CPP-ACPF releases weakly bound fluoride, phosphate, and calcium ions, which then deposits in the crystal voids. The phosphate and calcium ions release is thermodynamically driven. The CPPs with high binding affinity for apatite; upon entering the lesion, may bind to more thermodynamically favorable surface of appetite crystal face. Henceforth, once the CPPs binds to an appetite crystal in the enamel subsurface lesion, it may play a significant role in regulating anisotropic crystal growth and also inhibition of crystal demineralization [5].

When low concentration of fluoride is provided to CPP-ACP, the formation of mineral in lesion is consistent with fluorhydroxyapatite or fluorapatite [5]. With low fluoride concentration use, as in CPP-ACPF, there is a complex localization of free fluoride, phosphate and calcium ion activities. It helps to maintain a state of supersaturation, by suppressing the demineralization process [13]. Therefore, in our study we can assume that the release of the calcium, phosphate and fluoride ions was maximum in the 1st week which then slightly decreases in the subsequent 2nd and 4th week samples. Thus, we can conclude that CPP-ACPF can act as an excellent local slow-delivery system to treat the white spot lesion in tooth.

In conclusion, the remineralization potential of CPP-ACPF was found to be maximum in the first week after the artificial demineralization process. It then slightly decreases in the subsequent weeks therefore it is not time dependent. Thus CPP-ACPF can be used as a local slow-delivery system efficiently to treat the white spot lesion in enamel.