Introduction: Tuberculosis (TBC) is one of the most common forms of pleurisy, pleural effusion and extra pulmonary TBC. Tube thoracostomy is the primary treatment method in massive TBC pleurisy. On the other hand, video-Assisted Thoracoscopic Surgery (VATS) has come to the fore in the diagnosis and treatment of undiagnosed patients. In this study, our aim is to share the results of surgeries in patients with pleural effusion due to TBC or diagnosed with TBC later.

Materials and Methods: Files of patients were analysed retrospectively. Age, gender, symptoms, vital signs, laboratory finding, location of disease, diagnosis, surgical procedure, complications, length of stay, mortality and morbidity were examined. The effects of gender, location of the disease, fluid properties, and surgical procedures on TBC pleurisy were evaluated. The patients treated with surgery were enrolled in the study. Patients who were performed anti-TBC treatment even if they had pleural effusion, underwent relaxing thoracentesis, and did not undergo surgery were excluded from the study. The treatment method which yielded favorable results in surgery was taken into consideration. Tube thoracostomies performed before VATS applications were excluded. Results were analysed using Mann- Whitney U test, Fisher exact test and Multivariate linear regression analysis. P<0.05 was considered significant.

Findings: Sixty-four patients with TBC diagnosed through VATS or thoracotomy and treated with tube thoracostomy were examined. Male gender, right localization and exudative pleural effusion were found to have a significant effect on the development of TBC pleurisy (P<0.05). Furthermore, it was found that tube thoracotomy were more effective in the treatment of TBC pleurisy (P<0.05).

Results: The primary treatment method for TBC pleurisy is tube thoracostomy. Additionally, VATS, which is successful in diagnosis and treatment of undiagnosed TBC, is safe, effective and minimally invasive procedure.

Tuberculosis (TBC) is one of the most common forms of pleurisy [1]. It may occur soon after primary TBC or in 6-12 weeks after primary TBC infections. Delayed type hypersensitivity reaction caused by bacilli that reaches the pleural cavity through lymphatic or haematogenous ways is the main reason of TBC [2]. The incidence is 4-20% in patients with TBC [3]. The main symptoms are fever, chest pain and cough. Other symptoms are fatigue, night sweats, weight loss and dyspnoea. The degree of dyspnoea depends on the amount of accumulated fluid [4]. Diagnosis is made through laboratory examinations, radiological and surgical procedures [1,2,5]. Medical procedures are the primary treatment methods in patients with TBC pleurisy. Even if the patients are not treated, patients may recover spontaneously within a few weeks or months. However, the likelihood of having active tuberculosis in 5 years is high in those patients. Furthermore, residual pleural thickening rate is around 55% [2]. The primary method to relieve breathing in patients diagnosed with massive tuberculosis pleurisy is tube thoracostomy. On the other hand, a number of applications are insufficient for diagnosis and treatment in undiagnosed patients. In these cases, videoassisted thoracoscopic surgery (VATS), which provides the opportunity to receive comprehensive pleural imaging and a sufficient amount of biopsy, has come to the fore. VATS is a highly effective surgical method in the diagnosis and treatment of lung parenchyma, pleura, mediastinum, the main vascular structures and diaphragmatic pathologies [5]. In patients with pulmonary collapse and loculations, thoracotomy is another option. But it is not very preferred due to high complication rates [5]. In this study, we aimed to share the demographic characteristics and surgical methods of patients with TBC pleurisy.

Sixty-four patients suspected or diagnosed with pleurisy and treated with surgical methods in our clinic from 2004-2015 participated in the study.

The patients treated with surgery (therapeutic tube thoracostomy, therapeutic or diagnostic thoracotomy or VATS) were enrolled in the study. Patients who were performed anti- TBC treatment even if they had pleural effusion, underwent relaxing thoracentesis, and did not undergo surgery were excluded from the study. The treatment method which yielded favourable results in surgery was taken into consideration. Tube thoracostomies performed before VATS applications were excluded as they changed the number and rate. Flowchart is shown in graphic 1. 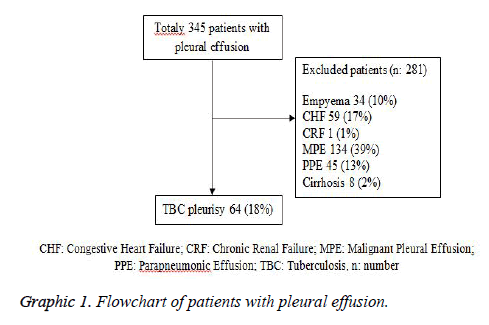 Data were analysed by Statistical Package for the Social Sciences (SPSS 21, Chicago, IL, USA). Kolmogorov-Smirnov and Shapiro-Wilk tests were used as tests of normality for continuous variables. Parametric data, non-parametric data and categorical data were expressed as mean ± standard deviation and n (%) respectively. Mann-Whitney U test was used for pairwise comparison of data without normal distribution. Fisher exact test was used for non-parametric and categorical data. Additionally, Multivariate linear regression analysis was used to determine the relationship between variables. P<0.05 was considered significant.

Table 2: Comparison of patients who underwent tube thoracostomy and vats or thoracotomy.

The first diagnostic method used in patients was chest radiography. The second method preferred was computed thoracic tomography. It was observed that ultrasonography (USG) was used less than the other two methods. The most common concomitant diseases were diabetes and diseases related to mental retardation. In treatment, it was found that 46 patients with tuberculosis pleurisy (72%) underwent tube thoracostomy, 14 (22%) underwent VATS, and 4 (6%) were applied thoracotomy. It was seen that tube thoracostomy was primary and the most effective treatment method in TBC pleurisy (P=0.0001). When VATS and thoracotomy are compared, It was seen that VATS was the most effective diagnosis and treatment in TBC pleurisy according to thoracotomy (P=0.031). In patients who cannot diagnose by other methods, VATS was accepted as prior surgical method for both diagnosis and treatment (Table 1).

Tuberculosis pleurisy is one of the most common forms of pleural effusion and extra pulmonary tuberculosis in many countries [1]. It was reported in various studies that the incidence was higher than prevalence of tuberculosis and reported to develop around 4-20% in patients with tuberculosis [3,6]. In this study, the rate of patients with TBC pleurisy was 18.55% and the rate was found as 5.39. The incidence of tuberculosis pleurisy varies according to geographic region and immunity. The status of the immune system is an effective factor as hypersensitivity reaction is one of the main hypotheses regarding to disease. The reaction is seen 2-3% in the United States, 20-25% in Africa, 11% in patients with suppressed immune system, and about 20-38% in HIV-positive patients [7]. In the present study, the most common associated diseases were diabetes and mental retardation.

Tuberculosis pleurisy is clinically acute and sub-acute. Additionally fever, chest pain, cough are seen in more than half of patients. Fatigue, night sweats, weight loss, haemoptysis, and dyspnoea are the other symptoms [8,9]. The most common symptoms of our patients were cough (n=48), chest pain (n=45), fever (n=39), and dyspnoea (n=22). Other symptoms were fatigue (n=15), palpitations (n=14), nausea and vomiting (n=8). Acute disease is more common in young patients having high immunity. Symptoms imitate pneumonia. However, leukocytosis is not seen. The fluid is usually one-sided, moderate or less and loculated. Long-term symptoms are encountered in the elderly. Even if the disease is not treated, patients heal spontaneously within a few weeks or months. However, the likelihood of having active tuberculosis in 5 years is high. Pleural thickening rate is around 55% [2].

In the diagnosis of effusions, chest radiography, computed tomography, thoracic ultrasound and magnetic resonance imaging are the main methods. At standard chest x-ray, fluid is usually unilateral and moderate. Massive fluid is rare. Effusion may be accompanied by nodules, fibrosis at the apex, hilar, and paratracheal and mediastinal lymphadenopathy. Computed tomography is very use for demonstrating pleural effusion, thickening, parenchymal nodules, lymphadenopathy and parenchymal tuberculosis. On the other hand, magnetic resonance imaging is useful in the distinction between malignancy and infection [2]. The main diagnostic methods used in our patients were lung X-rays and computed tomography.

In the diagnosis of tuberculosis pleurisy, the first procedure to be applied is to take samples from fluid and examine biochemically and microbiologically, and search for ARB (acid-fast bacilli) in sputum and fluid. ADA from fluid must be studied. When the cut-off value of ADA is accepted as 40 U/L, specificity becomes 90% and sensitivity becomes 92% for the diagnosis of tuberculosis pleurisy. It was reported that TBC did not develop in patients with effusion having low ADA level and high lymphocytes during the 5-year follow-up. If ADA level is 70 U/L and above, and lymphocyte/neutrophil level is over 0.75, there is a high possibility of developing TBC pleurisy. Additionally, if lymphocyte/neutrophil ratio is>0.75 while ADA level is 40-70 U/L, there is the likelihood of TBC pleurisy. Also high number of ADA, and low C - reactive protein levels have a diagnostic value over 90%. In TBC pleurisy the amount of protein may be 5 g/dL, lactate dehydrogenase levels may be more than serum levels, lower than glucose levels, and may be around pH 7.30 or less. In cytological examination, lymphocyte predominance existed about 50-90% [1,4,10,11]. In our study, the mean WBC was 8879.69 ± 3254.55, HB was 11.7 ± 1.34, HTC was 37.07 ± 3.44, sedim was 40.11 ± 14.16, TP was 7.65 ± 2.14, ALB was 4.05 ± 1.24, and ADA was 58.26 ± 7.54.

In some patients, sputum, cytological study of the pleural fluid, laboratory tests such as culture seeding and ADA level, or pathological examination of materials obtained through closed pleural biopsy may be inadequate for diagnosis. This group of patients who cannot be diagnosed constitutes 20-40% of patients with pleural effusion [5]. The causes of this situation may be the small number bacilli in sputum or pleural fluid, or pleural biopsy which cannot point to infected nodules. In most of these cases which cannot diagnosed and treated, serious parenchymal disease may develop in the near future. The most extensive area of VATS application is pleural effusion. VATS is a surgical method which allows thoracic manipulation with a few small skin incisions, accompanied by video imaging, performed with specially designed endoscopic instruments. Additionally, it is safe and minimally invasive surgical procedure that increases the postoperative patient comfort [5]. Undiagnosed patients with TBC pleurisy should be evaluated through VATS. Moreover, VATS will provide detailed information about lung parenchyma, mediastinal structures, main vascular formations and diaphragmatic [5]. In this study, fourteen patients were diagnosed and treated with VATS.

In the treatment of tuberculosis pleurisy, the main objective is to prevent the emergence of active tuberculosis, eliminating symptoms, and preventing the development fibrothorax. Pleural thickening is seen in 50% of patients despite the treatment. Loculations the pleural fluid, low glucose and high LDH are the risk factors for active tuberculosis [12]. Draining the fluid without diagnosis does not benefit in the long term. However, therapeutic drainage is recommended in patients with severe dyspnoea. In 1/4 of patients, thickening more than 1 cm occurs after treatment. There are some studies showing that fibrinolytic application reduces pleural thickening [13,14].

Recently, VATS and medical thoracoscopy have been compared. Medical thoracoscopy can be performed without general anaesthesia and outside the operating room and often provides enough information for the diagnosis. On the other hand, despite its risk of general anaesthesia, VATS allows therapeutic intervention in addition to the diagnostic usage. This aspect is superior to medical thoracoscopy [15]. Although surgical methods have a limited importance for the treatment of active pulmonary tuberculosis, they are able to play an integral role in the loculated fluid and some cases. VATS is a favourable method in terms of removal of pleural adhesions, performing a partial decortication, the removal of the pouch, ensuring the lung expansion, minimal morbidity, pain control and patients' stress [16]. Thoracotomy should be preferred if intense localization, lung trapping, and pleural fistulas are present. In our study, tube thoracostomy was sufficient for drainage of fluid inpatients diagnosed TBC pleurisy, whereas VATS and thoracotomy contributed 28% in undiagnosed patients developing loculations, experiencing expansion difficulties due to adhesions and requiring decortication.

The retrospective nature of the work constitutes a fundamental limitation. Other limiting factors were the absence of patient control information, the absence of medical treatment periods, Lack of sociocultural features, No family story and some patients do not have laboratory tests.