Evaluation of chemerin and leptin in serum of chronic hepatitis C patients.

Chronic hepatitis C (CHC) is considered a metabolic liver disease. Several non-invasive biomarkers that mirror liver injury progression have been proposed. Child pugh score including: Albumin, bilirubin and prothrombin time (INR) is used to assess prognosis in CHC. The aim of this study was to find out if the novel adipokines, leptin and chemerin, could be considered as additional tools for assessment of prognosis of CHC. The study was performed on 20 male patients with CHC, aged between 40 and 60 (mean value 47.5 ? 11.1). Exclusion criteria included: hepatitis B, human immunodeficiency virus (HIV) co-infection, hepatocellular carcinoma, diabetes mellitus, obesity and renal or heart failure. All patients and controls underwent the following laboratory investigations: Chemerin and leptin, alphafetoprotein, liver function tests, polymerase chain reaction (PCR), blood glucose level, fasting insulin and insulin resistance. A significantly higher serum chemerin and leptin concentrations were recorded in CHC patients compared to the control. The significant negative correlation recorded between chemerin and albumin, as well as between leptin and albumin demonstrates that a significant increase in the level of these adipokines occurs as liver function worsens. Moreover, a significant positive correlation between chemerin and prothrombin time (INR) indicates that cardiovascular risk was higher in CHC patients compared to controls. It could be concluded that chemerin and leptin may be considered of prognostic significance in CHC which might prevent the need to liver biopsy

There are approximately 170-200 million people in the world infected with hepatitis C virus (HCV) and 350,000 deaths each year are caused by HCV infection [1]. HCV infection is associated with the development of insulin resistance and hepatic steatosis [2]. Through these metabolic pathways (as well as through other hypothesized mechanisms that involve lipid metabolism, systemic inflammatory signals, and endothelial dysfunction), chronic HCV infection also contributes to significant systemic cardiovascular morbidity and mortality [3]. It is also well recognized that the presence of metabolic disturbance in patients infected with HCV accelerates the development of liver disease [4], hepatocellular carcinoma and the progression to advanced fibrosis [3].

Adipose tissue acts as an active endocrine organ. The cytokines produced by adipose tissue (adipocytokines) have a distinct role in modulating inflammatory response and insulin sensitivity [5]. Some adipocytokines have been said to influence liver fibrosis progression [6]. Thus, adipokines profile, together with insulin resistance, seems to play a distinct role in the pathogenesis of liver disease [7].

Leptin is a 16-kDA protein encoded by the obese (ob) gene. It is produced primarily in the adipocytes of white adipose tissue. One of the major actions of leptin is the control of energy balance by binding to receptors in the hypothalamus, leading to reduction in food intake and elevation in temperature and energy expenditure. In addition, increasing evidence suggests that leptin, may play an important role in cardiovascular and renal regulation [8]. Leptin receptors (ObR) are expressed in a broad range of peripheral tissues, including the liver, and have isoforms as a result of alternative splicing. The level of secretion of leptin is associated with the fat mass and provides anti-obesity signals, regulating food intake, sympathetic tone and energy expenditure in conditions of energy excess. Leptin promotes fibrogenesis both by direct and indirect mechanisms. The direct effect is by activation of hepatic stellate cells (HSCs) [9,10]. However, the indirect mechanism is by activation of Kupffer cells, macrophages and sinusoidal endothelial cells through upregulation of transforming growth factor beta-1(TGFβ1) production. Leptin increases the expression of procollagen I, TGFβ1 and α-smooth muscle actin in the activated HSCs [11]. Moreover, leptin promotes fibrogenesis by stimulation of tissue inhibitors of metalloproteinases (TIMPs) and inhibition of matrix metalloproteinase-1(MMP-1) [12].

The family of adipokines is still growing and novel adipokines such as chemerin, visfatin, and vaspin were recently described in association with different diseases [13-15].

Chemerin is a new adipokine, which expression has been found in a number of tissues including those of the liver, pancreas and lungs, as well as in adipose tissue. The liver is one of the main chemerin-secreting organs [16], although adipose tissue produces more. It has been shown to be associated with body mass index (BMI), plasma triglycerides (TG), blood pressure and insulin resistance [17]. Chemerin is a chemoattractant protein and it has a role in adipogenesis, angiogenesis and glucose homeostasis. Chemerin receptors are expressed in the liver suggesting that chemerin may be relevant in liver physiology and pathophysiology [18]. It reveals chimeric nature; being both pro-inflammatory and anti-inflammatory. The pro-inflammatory action is exerted by activating and recruiting natural killers (NK) cells and macrophages into inflamed tissue [19], however the anti-inflammatory action occurs by inhibiting synthesis of pro-inflammatory mediators and stimulating adiponectin expression [20]. Kukla et al. confirmed a marked expression of chemerin in the liver of CHC patients [21]. In the same line Imai et al. recorded that platelet counts and total bilirubinlevels are associated with serum chemerin levels in patients with hepatocellular carcinoma [22].

The frequency of hepatic infection in males was reported to be higher than females with a male to female ratio of 3:8:1 [23]. Furthermore, the rates of fibrosis progression in chronic hepatitis C are significantly higher in males than females [24,25], probably due to the anti-fibrogenic effect of oestrogen via inhibition of stellate cells [24], and the higher hepatitis C virus clearance rate in women than men [26].

In view of the previous considerations, male patients were selected to investigate if the novel adipokines, leptin and chemerin, could be considered additional tools for assessment of prognosis of CHC in male patients.

The present study was performed on 20 male patients with Chronic hepatitis C viral infection (CHC), from those attending The Tropical Medicine Department- Cairo University and categorized as CHC patients with persistently elevated alanine aminotransferase (ALT) activity for at least 6 months, aged between 40 and 60 with a mean value of 47.5 ± 11.1, and BMI mean value26.94 ± 0.94 kg/m2. Exclusion criteria included: hepatitis B or HIV co-infection, hepatocellular carcinoma, diabetes mellitus, obesity and renal or heart failure.

Fasting blood samples were collected from all subjects in blank vacutainers (left to clot, centrifuged and sera separated and stored at -20 till assay date). Moreover, 2ml were collected for assay of prothrombin time on aqueous trisodium citrate dehydrate to obtain plasma samples for testing INR within 2 hours as the preferred schedule. The diagnosis of CHC was confirmed by the presence of serum HCV-RNA assayed with the reverse transcription polymerase chain reaction (RT-PCR) method. All patients were native for the antiviral treatment. The control group consisted of 20 healthy male volunteers without anti-HCV antibodies, hepatitis B surface (HBs) antigen negative and HIV negative, with normal ALT, age mean value 45.9 ± 11.8 years and BMI mean value 25.53 ± 2.21 kg/m2). All the healthy volunteers had normal fasting glucose levels.

All procedures performed were according to the ethical standards of the institutional and national research committee given in the Declaration of Helsinki1964, as revised in 2013. The authors declare no conflicts of interest. Informed consent was obtained from all participants in the study.

The results were expressed as mean ± standard deviation. The statistical difference between groups was analyzed using Student's t-test. Pearson's correlation analysis was performed to determine the relationships between variables. The results were considered significant at p<0.05. The Statistical Package for the Social Sciences, Version 15 software was used, and the presentations performed using Microsoft Excel 2007. 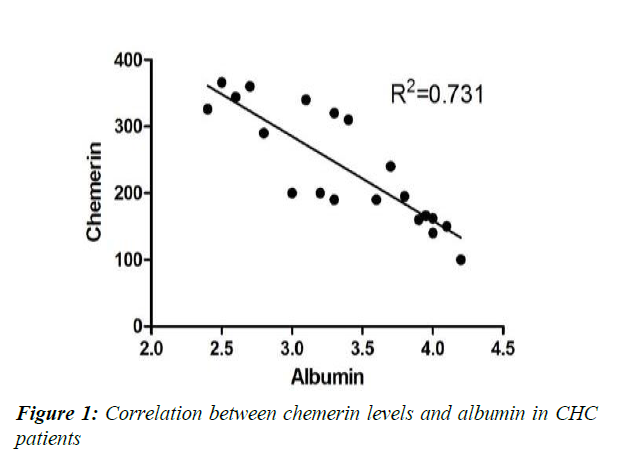 Figure 1: Correlation between chemerin levels and albumin in CHC patients 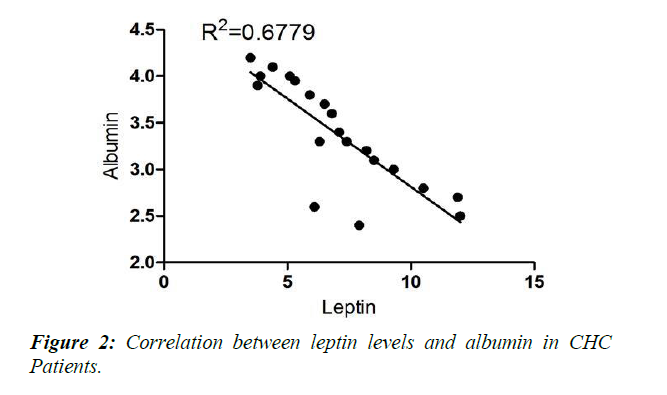 Figure 2: Correlation between leptin levels and albumin in CHC Patients. 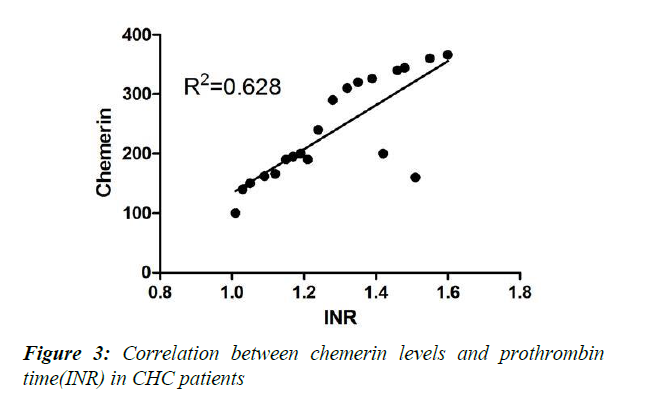 CHC viral infection causes liver inflammation by complex molecular pathways including direct viral effects and indirect mechanisms involving cytokine pathways and oxidative stress induction [31]. Multiple studies reported the contribution of different adipocytokines to the development of metabolic abnormality in CHC and their role in fibrogenesis yet some results seem to be contradictory and confusing [32].

In the current study, the goal was to concentrate on CHC as a virally derived metabolic abnormality. Therefore, the study was performed on only normal weight and overweight but not obese, and on normoglycaemic CHC patients, to avoid the possible influence of obesity or diabetes as metabolic abnormalities with direct effect on adipokine profile. Several studies tried to explain the reasons of high prevalence of diabetes mellitus in chronic hepatitis C patients. Explanations proposed included HCV induced steatosis, hepatic insulin resistance or immune mediated extrahepatic diabetogenic effect [33]. High serum levels of chemerin were reported in humans with both type one and type two diabetes, or impaired glucose tolerance [34].

Hepatocellular carcinoma (HCC) is one of the most frequently occurring cancers worldwide. The conventional risk factors include persistent infection with hepatitis viruses and alcohol consumption [35]. Chemerin was reported to play an important role in the development and progression of HCC [36]. Thus, to avoid the interference of chemerin alterations, AFP which is still the best available screening serological test for HCC [37], was performed to exclude co-exsistent HCC. The results obtained showed that the level of AFP in CHC patients, although higher than in the control group it was still lower than 200 ng/ml the best specificity level for the determination of HCC in CHC patients [38].

In the present study, significantly higher serum leptin concentrations were found in CHC patients compared to the control. These results are in agreement with the previous findings of Sell et al. and Tiftikci et al. [40,41], and could be attributed to the role of leptin in promoting fibro genesis [10]. Significantly increased chemerin levels were recorded also in CHC patients, which is in line with the findings obtained by Kukla et al. However, chemerin levels were negatively correlated with necro-inflammatory grade [42]. The results could be interpreted by the fact that chemerin is a chimeric protein synthesized mainly in hepatocytes and fat tissue with both pro-inflammatory and anti-inflammatory effects. It acts as a chemoattractant for macrophages, dendritic cells (DC), and NK cells and stimulates macrophage adhesion to vascular cell adhesion molecule 1 (VCAM1) and fibronectin [43]. It was claimed as an important element in the pathogenesis of CHC especially in the inflammatory mechanism although further investigations are required to clarify its role [32].

Chemerin is known to be responsible for coronary artery disease development together with many other factors because it is highly associated with inflammation and adipogenesis. The results of the present study showed a significant positive correlation between chemerin and prothrombin time (INR) (r2=0=628) as shown in Figure 3 indicating that cardiovascular risk is higher in CHC patients compared to controls.

The results obtained in the current study demonstrate that the serum chemerin and leptin levels increased in parallel with the worsening liver functional reserves in CHC patients and chemerin may help in the detection of increased cardiovascular risk in CHC patients. It could be concluded that chemerin and leptin may be considered as additional tools for assessment of prognosis of CHC and monitoring the virally derived metabolic abnormality.