Evaluation of awareness, attitude and smoking rates among youngsters in central India

Introduction: It is a well-known fact that cigarette smoking is hazardous to health & is the leading cause of preventable diseases & responsible for more than 5 million deaths every year. Smoking increase the risk of cardiovascular diseases, respiratory diseases, and 10 different forms of cancer. Recent data suggest that the current prevalence rate of youngsters smoking in India is 28.6%. A survey- based questionnaire was developed in Google Form to monitor tobacco use, elicit attitudes about tobacco, and obtain information on exposure to tobacco smoke among youth.
Methodology: A questionnaire survey consisting of 20 open-ended questions was conducted among the age group 18-25 years over a period of 3 months from July – September 2019 in the outpatient department of Oral Medicine & Radiology, Rungta College of Dental Sciences and Research Bhilai (CG).
Result: A total of 300 subjects participated out of which 80.3% male, 19.7% female, and the overall smoking rate were found to be 64%. A majority of the participants stated that they adapted to smoking because of peer pressure (87.7%) with believing that smoking is a sign of maturity.
Conclusion: A high percentage of youngsters admitting to smoking cigarettes as demonstrated from our survey highlights a poor indicator of National Health Status. The need to formulate stringent policies to guide youngsters to understand the deleterious effects of tobacco, through advertisements, banners, setting up of de addiction and counseling centers

A cigarette is a major problem in developing countries. It is a well-known fact that cigarette smoking is hazardous to health & is the leading cause of diseases & responsible for more than 10 million deaths every year. Smoking continues to rise in low and middle-income people as well as high-income people [1]. According to WHO, the prevalence of smoking among young people in India is 12% [2]. Men are more commonly affected as compared to their female counterparts. It is predicted that tobacco deaths in India may exceed 1.5 million annually by 2020 [1]. Attitude, behavior, knowledge about smoking is a very important factor to motivate a smoker to quit habits. Apart from causing pain, functional and aesthetic problems, cancer also leads to a loss of working man-hours and hence, in the long run, it can have a significant impact on the Indian economy. If they quit habits at an early stage the reduced risk of stroke, cardiovascular disease, and smoking- related cancers and increases the health benefits [3]. As the impact of smoking is hazardous with the serious side effect. So the present study was conducted to evaluate the awareness, attitude and smoking rates among youngsters visiting dental hospital Bhilai (CG). This study was conducted to assess the awareness, knowledge and smoking rate among youngsters.

A questionnaire survey consisting of 20 open-ended questions was conducted over 3 months from July-September 2019 in the outpatient Department of Oral Medicine & Radiology, Rungta College of Dental Sciences and Research Bhilai (CG). The questionnaire was formed for an online survey using Google form. Each patient from age 18-25 year visiting the department was provided with the questionnaire using an iPad. A total of 300 patients participated in this survey with their consent. The questionnaire was distributed randomly without knowing about the patient smoking habits. The questionnaire was divided into 5 sections; regarding smoking rates, knowledge & awareness, the impact of smoking, evaluate reasons for smoking, & discontinue habit each patient was allowed to fill the form only once.

The result was analyzed using the statistical package for social sciences (SPSS) responses were coded as “yes”=1, No=2, Not sure=3 “passive smoking is injurious “the score were “agree=1, Disagree=2, Don’t know=3 Quitting intentions was assessed by the question “Have you tried to quit smoking in past “yes “given a score of 1”, “No” given a score of 2. The data were described using frequency distribution. A Chi-square test was used to measure the association between awareness and attitude. The value of p<0.05 confidence interval 95% was considered significant (Table 1).

Table 1. Response of the study group towards smoking.

Table 2. Sociodemographic characteristics of the sample.

Response towards attitude, behavior, and perception about smoking

Table 3. Response of the study group to attitude, behavior. 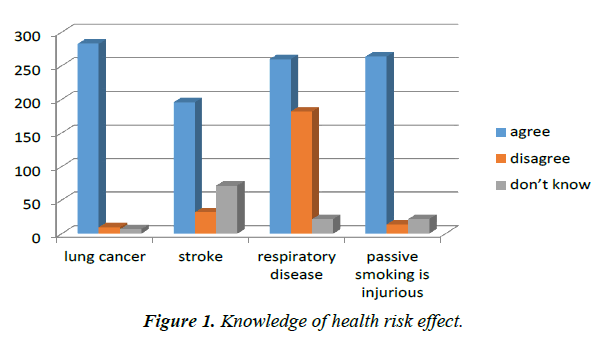 According to the World Health Organization, India is home to 12% of the world’s smokers. This study was done to analyze the awareness, attitude and smoking rate among youngsters visiting dental hospital Bhilai (CG). A similar study conducted by Garg et. al. in 2013 explored the attitude, behavior, knowledge and smoking rates among youngsters from Southern India [1]. It revealed that 41.03% of its participants admitted to smoking. Another study conducted by Dawood et al in 2016 showed 52.6% were smokers among the Iraqi population [2]. Moodie et. al., in 2017 analyzed that 49% smoker found to be among the UK population. The results of the study survey demonstrated 64% of the participating youngsters admitting to smoking cigarettes [4].

A similar study in Iraq (2016) indicated that the majority of Iraqi smokers have a moderate level of awareness toward the health risk effects of smoking. Results indicated that there was low awareness of other health effects of smoking. For example, smoking is a risk factor for stroke, stained teeth, causes impotence in male smokers, and lung cancer for non‑smokers from secondhand smoking [2].

A study in China reported that only half of the smokers were aware of the harm of secondhand smoking. This finding is similar to the other studies in the Western countries, where smokers reported their personal risk from smoking, most probably to minimize cognitive dissonance from smoking and protect themselves from worry.

Attitude of smokers and non-smokers

The study revealed an alarming number of youngsters involved in smoking tobacco from an early age, most of them considering it a fashionable act. Efforts should be made to dissipate the casual outlook of youngsters regarding smoking and to make them perceive the deleterious effects it has on health outcomes [1].

Behavioral perception of the smokers

The findings of this study demonstrated that the teenage population was more prone to adopting smoking and a substantial percentage of the participants agreed that peer pressure was the most important factor that led to the initiation of smoking. Hence, focus on counseling and educating these young smokers might disseminate these ideas in their peer circle [4,5,6].

Knowledge on the effects of smoking

The study done in Iraq shows smokers who had a high score of knowledge were more likely to have plans to quit smoking. The same results were found in China that there was a relation between the knowledge of health risk effects of smoking [10,11,12].

A considerable number of respondents agreed that celebrities play an important role in smoking practices among youngsters and most respondents disagreed to the fact that hookah helps to quit smoking [1,4,10].

Similar to other studies revealed that quit intention was positively associated with the awareness of the health risk of smoking [13,14]

A high percentage of youngsters admitting to smoking cigarettes as demonstrated from our survey highlights a poor indicator of national health status. The need to formulate stringent policies to guide youngsters to understand the deleterious effects of tobacco, advertisements, banners, setting up of de‑addiction and counseling centers, should be conducted. This study would be helpful for health policymakers and health care professionals to understand the current knowledge & perception of smoking health effects.