Erythrocyte antioxidant enzymes and their correlation with malon-dialdehyde in malaria.

Invasion of human erythrocytes by malaria parasites causes alterations in antioxidant po-tential of the red cells. The present study was undertaken to investigate the erythrocyte an-tioxidant enzymes like superoxide dismutase(SOD), catalase(CAT) in malaria patients. Oxi-dative stress was estimated by measuring malondialdehyde(MDA) which is a marker for lipid peroxidation. 30 malaria patients were enrolled in this study. They were divided into 2 groups of 15 each with Plasmodium vivax malaria and Plasmodium falciparum malaria. Re-sults were compared with 20 healthy control subjects. Significant decrease(p<0.001) in SOD and CAT and increase in MDA (p<0.001) indicates that there is reduction in antioxidant en-zymes and increased vulnerability to free radical damage in erythrocytes. This study there-fore emphasizes the need for early treatment of malaria patients to reduce the red cell dam-age.

Plasmodium infected human erythrocytes are under in-creased oxidative stress exerted by the malarial parasite [1,2]. Malarial parasite is capable of generating reactive oxygen species ( ROS ) within the erythrocytes and the ROS resulting from immune activation can further dam-age the uninfected erythrocytes [3]. It is also known that erythrocytes are equipped with antioxidant enzymes that could protect them against damage [4]. In the present study attempt has been made to assess the changes in an-tioxidants enzymes like superoxide dismutase (SOD) and catalase (CAT) in human erythrocytes infected with Plasmodium falciparum and Plasmodium vivax. The cor-relation between antioxidant enzymes and malodialde-hyde (MDA) is also included under this study.

The study group consisted of 30 untreated malaria pa-tients between the age group of 18 to 60 years of both sexes. These patients attended “Malaria Clinic” OPD at Wenlock District Hospital, Mangalore, with the symp-toms of fever and rigor, headache, vomiting. Signs in-clude splenomegaly, hepatomegaly and anemia. The control group included 20 healthy individuals of both sexes of the same age group.

A finger prick blood sample was taken to prepare thick and thin blood films to determine the presence or absence of malaria parasites. Patients with malaria were enrolled in the study after informed consent was obtained from the patients. This study was approved by Institutional Ethical Committee of Kasturba Medical College, Manga-lore. Of the total 30 malaria patients, 15 patients had Plasmodium vivax and 15 patients had Plasmodium falci-parum malaria.

5ml of venous blood samples were collected randomly in EDTA bottles from malaria patients and normal healthy subjects. Blood samples were centrifuged at 3000g for 10 minutes. Plasma was discarded. The cells were washed three times in cold saline. The RBC’s were then suspended in an equal volume of 0.9℅ saline and used for the estimation of malondialdehyde(MDA), superox-ide dismutase(SOD) and catalase(CAT).

Lipid peroxidation( MDA) : The method of Stocks et al was followed [5]. Malondialdehyde a secondary product of lipid peroxidation, reacts with thiobarbituric acid(TBA) in acidic medium to give a pink coloured pigment. The pink colour is extracted with butanol and the absorbance read at 535 nm. Values were expressed as nanomoles per deciliter.

SOD activity was measured using the method of Beauchamp and Fridovich [6]. The principle of SOD ac-tivity was based on the inhibition of nitroblue tetra-zolium(NBT) reduction. The blue coloured formazan was measured at 560nm.

CAT activity was estimated by the method of Brunnan et al [7]. The assay is based on the disappearance of H2O2 in the presence of enzyme.

Values were expressed as Units/gm Hb. The hemoglobin content of the erythrocytes was determined by the cyan-methemoglobin method [8].

Statistical analysis was done by using Kruskal-Wallis test. The p-value <0.05 was taken as significant. Correlations between the variables were estimated by Pearson’s correlation coefficients.

The catalase activity was also significantly decreased in P.vivax and P.falciparum patients when compared to normal subjects(p<0.001). Maximum decline in CAT ac-tivity was seen in P.vivax patients (Table 1).

A negative correlation was obtained between MDA and antioxidant enzymes SOD and CAT (Table 2). 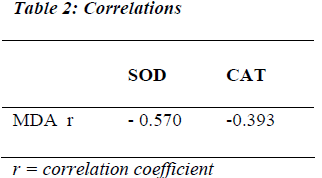 Highly increased MDA found in our study in malaria pa-tients indicates that there is increased production of reac-tive oxygen species(ROS) in these patients. The malaria parasite itself generates large quantities of ROS and also through its interaction with phagocytic cell system [9]. Some of these radicals attack the plasma membranes and hemoglobin. Erythrocytes are rich in polyunsaturated fatty acids which makes them very vulnerable towards oxidative stress. The ROS generated in host-parasite in-teractions can cause several biochemical changes like lysis of erythrocytes and alteration in major antioxidants of erythrocytes[10,11,12]. In line with these authors we have found in our study that there is highly significant increase in lipid peroxides in malaria patients and the in-crease in MDA is much more in P. falciparum patients compared to P.vivax patients which indicates the severity of falcipa-rum malaria.

During their intra erythrocytic development the parasites are able to increase in some cases and decrease in others the levels of some antioxidant defenses of the host eryth-rocytes. Pabon A. et al have reported increase in SOD and glutathione peroxidase activity in patients with non-complicated malaria [13]. Higher concentration of antioxi-dants may be involved in clearance of malaria parasite. Amy M et al have reported increase in α –carotene in acute malaria in children [4,10]. In contrast ,we have found in our study highly significant decrease in erythro-cyte antioxidants SOD and CAT activities in both P.falciparum and P.vivax patients. Since the malaria para-site itself utilizes erythrocyte proteins for its metabolic requirements, the concentration of enzymic antioxidants are decreased with parasite maturation. [12,14]. There is a decreased utilization of the reduction potential in detoxification of reactive oxygen species. Oxidative stress is therefore aggravated by reduced effec-tiveness of the antioxidant defence system. The negative correlation between MDA and SOD and CAT further support this finding.

The increased vulnerability of erythrocytes to damage and decreased antioxidant system emphasizes the need for early treatment of P.falciparum and P.vivax malaria pa-tients to minimize the red cell destruction and resulting anemia.