#These authors contribute equally to this work

Spinal Cord Injury (SCI) is the result of an extremely serious physical trauma to the spinal cord. The lasting and significant impact including paralysis, gatism, hyperalgesia, hyperthermoesthesia and chronic pain, severely reduce the patients’ quality of life. The epidemiological study suggested the annual incidence of SCI reached 23.7 cases per million people in China [1].

Spinal cord swelling was reported to be correlated with worst outcome [2]. Spinal cord swelling develops during the first 72 h post SCI, with the combination of spinal cord haemorrhage and oedema [3,4]. Decompression by laminectomy, which creates more spaces for the swollen spinal cord, is accepted to be beneficial for patients’ long-term functional recovery [5-7]. During the acute period, a great number of SCI patients underwent laminectomy and/or fusion (lam/fusion) [7]. Hardto- treat symptoms, especially pain still exist post-laminectomy. Based on the latest report from Swiss, pain was reported by 68.9% and chronic pain by 73.5% among all the participating SCI patients. The most frequently reported pain location, as reported by 54.6% patients, was the back/spine [8]. Neuropathic pain post SCI remains poorly understood, some researchers attributed it to the nerve lesions [9,10].

Our previous clinical and experimental studies showed evidence of laminectomy leading to failed back surgery syndrome. The failure has been widely accepted to be caused by Epidural Fibrosis (EF). The formatted epidural scar can squeeze the spinal cord and/or nerve root, resulting in radicular pain post laminectomy [11-16]. MRI scans done during our stem cells transplantation studies proved EF in the animal spinal cord injury model post laminectomy [17-19]. We proposed the hypothesis that neuropathic pain can be exacerbated by EF post laminectomy in SCI, because EF can stimulate a repeat occurrence of spine cord compression after surgical repair through the formation of epidural scar tissue. An epidural scar can be readily formed due to the high level of inflammatory activity in the SCI area.

In the present research with SCI rats, we performed macroscopic evaluation, histology, and MR scans. The evidence highly suggested that EF is the unappreciated cause of spinal cord compression post laminectomy in rats with induced SCI. Meanwhile, EF is more easily formed in SCI rats.

All animal experiments should comply with the ARRIVE guidelines and should be carried out in accordance with the U.K. Animals (Scientific Procedures) Act, 1986 and associated guidelines, EU Directive 2010/63/EU for animal experiments, and were approved by the Ethics Committee of Pirogov Russian National Research Medical University.

The rat model was created as previously reported [13,14,18]. Ketamine (50 mg/kg) was intraperitoneally employed, for satisfactory anesthetization. A warm pad was used to maintain the animal’s body temperature during surgery (Braintree Scientific INC, USA). All rats were placed in the prone position and the dorsal fur was shaved. Iodophor (KMN3, Kazan Medical Instruments, Plant Joint Stock Co) was used to sterilize the surgical area. The standard laminectomy was performed at the level of thoracic 9-10 segment (T9-T10).

For the rats in injury groups, the force of 100 kilodynes or 200 kilodynes induced an impact injury to the spinal cord using the PSI-IH Impactor (Precision Systems and Instrumentation LLC, Fairfax, VA). Then the wound was flushed with ice saline, and the wound site was surgically sutured. For the rats in control group, hemostasis with ice saline and surgical suture was performed after standard laminectomy.

In order to prove the successful creation of the animal SCI model, Basso, Beattie, and Bresnahan (BBB) locomotor test was performed to evaluate the hindlimb motor behavior in all groups, in a double-blind fashion before injury and weekly post injury [20].

Based on our previous reports, H and E staining was performed to evaluate epidural scar formation [12-14]. Rats were deeply anesthetized, then saline and 4% paraformaldehyde (SIGMAALDRICH, USA) in 0.1 M phosphate (SIGMA-ALDRICH, USA) buffer was used for perfusing. The entire T9 and T10 vertebral columns, including the paraspinal muscles and epidural scar tissue, were resected en bloc. The collected samples were then decalcified and dehydrated with Cal-Ex II solution (Thermo Fisher Scientific, USA) for 2 days. After paraffin embedding, 5-μm axial sections of the prepared samples were stained with hematoxylin and eosin. The light microscope (Leica DM500-TR, Germany) was used to evaluate epidural scar adhesion three areas were selected from the center and the margins of each section for the fibroblasts and inflammatory cell count.

All statistical analyses were performed by SPSS 17.0 software package (SPSS Inc., Chicago, USA). Results were considered to be statistically significant with p<0.05. All data are presented as mean ± Standard Error of the Mean (SEM), and one-way Analysis of Variance (ANOVA) was employed. 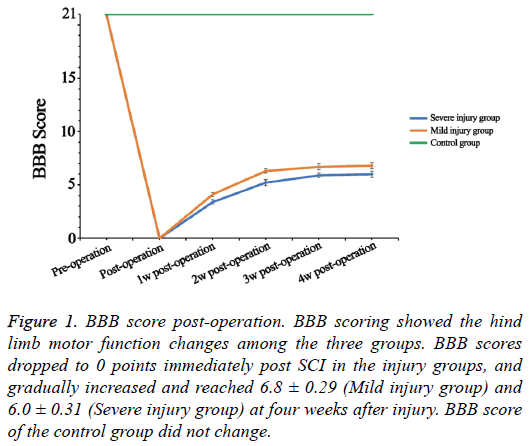 MRI scans suggested the expected spinal cord injury in the experimental groups (Figure 2), while no evidence of SCI was noted, EF was seen in the control group. MRI scans suggested all rats showed the sign of epidural scar formation. Based on the sagittal scans, compared with injury groups which showed severe epidural scar adhesion, control group showed mild epidural scar adhesion. The Epidural Scar (ES) in injury groups was observed to cause severe the spinal cord compression. 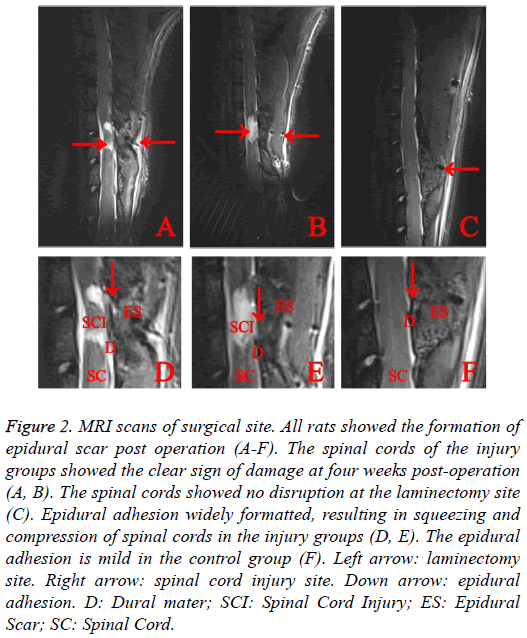 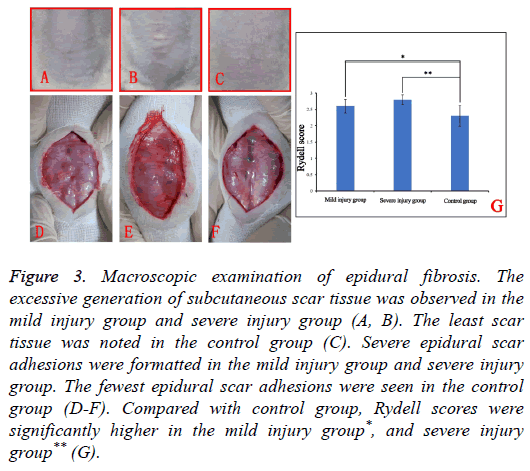 Upon reopening the surgical sites of the mild injury group and severe injury groups dense, difficult to dissect adhesions were noted. Attempts to dissect these adhesions often caused disruptions of the dura mater with hemorrhages (Figures 3D and 3E). 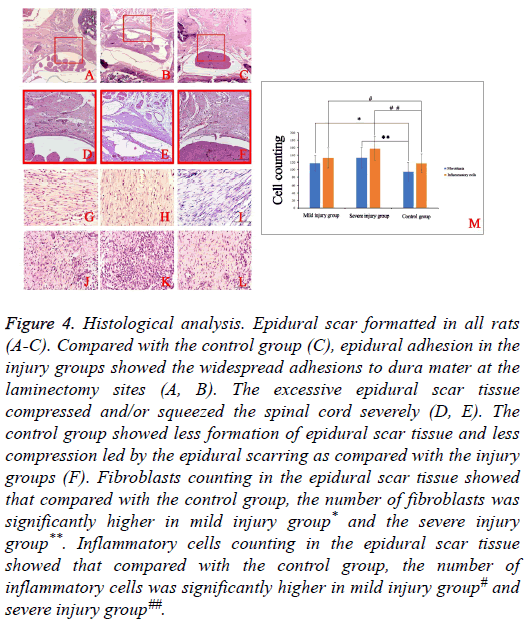 Epidural fibrosis is the development of the deposition of epidural scar tissue adjacent to the spinal cord and/or nerve roots. Failed Back Surgery Syndrome (FBSS) is characterized by continued pain in the lower posterior trunk and/or lower extremities following laminectomy. It was reported that EF formation contributes to up to 24% of FBSS cases [22]. EF severely limited the efficacy of surgery. Thus, global researchers and physicians have been focusing on the development of an effective strategy to treat the formatted EF and to prevent EF formation.

Although the detailed mechanism of EF formation has not yet been understood, the present study gave one hint. Based on the previous report, chronic SCI results in accelerated atherogenesis through maintaining a low-degree chronic inflammatory state [23]. As our previous reports suggested, aggravating EF led to the increasing expression of some proinflammatory cytokines, such as including interleukin 6, Tumor Necrosis Factor (TNF)-α [11,13,14]. These proinflammatory cytokines can further activate the signaling pathways which are involved in regulating inflammation, such as NF-κB signaling pathway [13]. The low-degree chronic inflammatory state led by SCI, amplified the signaling pathway activation. Fibroblasts proliferation and migration in the surgical site was activated by a number of inflammatory cells.

Based on the previous report, how severe the degree of resulting fibrosis as a sequelae of migration largely depends on the intensity and duration of inflammation [24]. Fibroblasts as the major epidural scar cell source played the central role in epidural scar formation. The formatted epidural scar is capable of compressing and the squeezing of spinal cord/nerve root. We hypothesized to patients with a low-degree chronic inflammatory state pre-laminectomy are at greater risk for EF formation.

Neuropathic pain is accepted to be one of the most troubling adverse sequelae post SCI, which was accompanied by several factors, such as anger, negative thinking, and low mood [25]. Pain is able to completely overwhelm the patients’ existence [26]. The detailed mechanism leading to neuropathic pain remains poorly understood. For a certain proportion of SCI patients spinal cord compression is one of the factors leading to neuropathic pain [6]. Laminectomy is the widely accepted strategy for the decompression of an injured, swollen spinal cord [5]. However, the spinal cord compression may reoccur post laminectomy with EF formation in the chronic SCI patients. Neuropathic pain can be aggravated for the formation of EF in the chronic stage of SCI.

The present study is the first study looking into the correlation between EF and SCI. With laminectomy rats with/without SCI, we demonstrated that EF development can be aggravated by the existence of SCI post laminectomy. This may well explain part of the factors accelerating EF formation. Based on the MRI scans and histological analysis from the present research, the excessive generation of epidural scar caused severe spinal cord/nerve root compression. The spinal cord/nerve root compression could exacerbate neuropathic pain post SCI. With laminectomy rats with mild and severe SCI, the present study revealed that the higher grades of SCI were accompanied by more widespread epidural adhesion, more severe spinal cord compression and the greater neuropathic pain.

We concluded that, in SCI rats, EF is the unappreciated cause of spinal cord compression post laminectomy and epidural scarring can be readily formed. Thus, the present study suggested the necessity of preventing EF for the SCI patients who require surgical intervention in order to diminish the incidence of neuropathic pain post SCI.

More research will be needed to verify our hypothesis that special measures should be taken to prevent EF formation postoperation in patients presenting in an inflammatory state prelaminectomy.