2Provincial Laboratory of Hygiene of the Middle, Delegation of the Ministry of Health, Kenitra, Morocco

4Ministry of Education and Training, Yemen

Malaria is a vector-borne parasitic disease that is still one of the major public health problems in tropical countries, particularly in sub-Saharan Africa. With the mortality and morbidity rates recorded every year, it also represents a huge financial burden for the populations and consequently the disease constitutes an obstacle to the development of the endemic countries. For all these reasons, the fight against malaria together with the fight against AIDS and tuberculosis is one of the Millennium Goals defined by the United Nations and the Global Fund is intended to supply the applicant countries with Drugs. In order to estimate the risk of malaria in Morocco, we carried out a retrospective study of the situation of imported malaria diagnosed in the provincial laboratory of parasitic diseases Kenitra during the period 1987 to 2013. The results show that seventy-eight cases were identified in 1987, 91% of these cases are male, aged over 15 years. The cases recorded are imported from African countries: The Republic of Guinea 25% and Niger 15%. The parasites encountered are Plasmodium falciparum 61%, Plasmodium vivax 29% and Plasmodium ovale 10%.

Despite progress in global malaria control programs, the risk of human infection with parasites of the genus Plasmodium is still present, with five species being identified, the most formidable and the most frequent of which is Plasmodium falciparum, species responsible for severe, unpredictable and responsible forms of most fatal cases in the world. This species is the most widespread on the African continent [1]. Other Plasmodium malariae, Plasmodium ovale, Plasmodium vivax and Plasmodium knowlesi, which was isolated in humans in Southeast Asia [2]. In 2013, the risk of this disease lies in 97 countries and territories; about 82% of the cases reported and 90% of the associated deaths were recorded in the WHO African region. However, due to increased trade with endemic countries, we are witnessing the emergence of a new epidemiological profile: import malaria. A potential factor for the reintroduction of the disease on Moroccan territory, where climatic and ecological conditions remain favorable for its development. Plasmodium is the main cause of fevers on return from a stay in intertropical zones, the prevention of which is often neglected by travelers. A reliable diagnosis and an effective and prompt treatment are therefore the keys to a good case management of malaria (WHO, 2000) hence the interest of studying the epidemic profile of this scourge.

Context of the study

The study was conducted at the provincial laboratory of parasitic diseases Kenitra retrospectively during the period 1987 to 2013.

The data were collected a standardized form with demographic, epidemiological, clinical, biological, prophylactic and therapeutic parameters. All clinical records of patients for whom the provincial malaria laboratory Kenitra performed the search for Plasmodium in the blood have been reviewed. For the missing files, the investigation sheets have been completed or completed as far as possible from the laboratory bench register. The computer data entry was carried out using the Excel Microsoft® 2007 software.

Included are all patients for whom screening Plasmodium in the blood was confirmed positive by the thick film using an optical microscopic. The population examined is heterogeneous, consisting mainly of patients with diverse nationalities with a fever after returning from an endemic area.

Diagnostic methods for the detection of Plasmodium in the blood

Thick drop and blood smear sampling is performed at the third finger of the patient by rapid stitching using sterile vaccinostyle Blood deposited a slide is spread and deformed with the corner of another blade by a circular motion to form a disk about 1 cm in diameter. Allow to dry, hemolysis before fixation and staining with a 3% Giemsa solution in phosphate buffer at pH 7.2 and leave to act for 15 min. Wash with tap water and dry, followed by a microscopic examination (Ministry of Health, Rabat: Elite Printing).

Annual change in positive malaria cases: Of the 27 years of the study period, 78 positive blades of patients were staying in endemic areas were analyzed. All cases diagnosed in the provincial malaria laboratory Kenitra between 1987 and 2013 are illustrated in Figure 1.

Figure 1. Evolution of the annual number of positive malaria cases from 1987 to 2013. 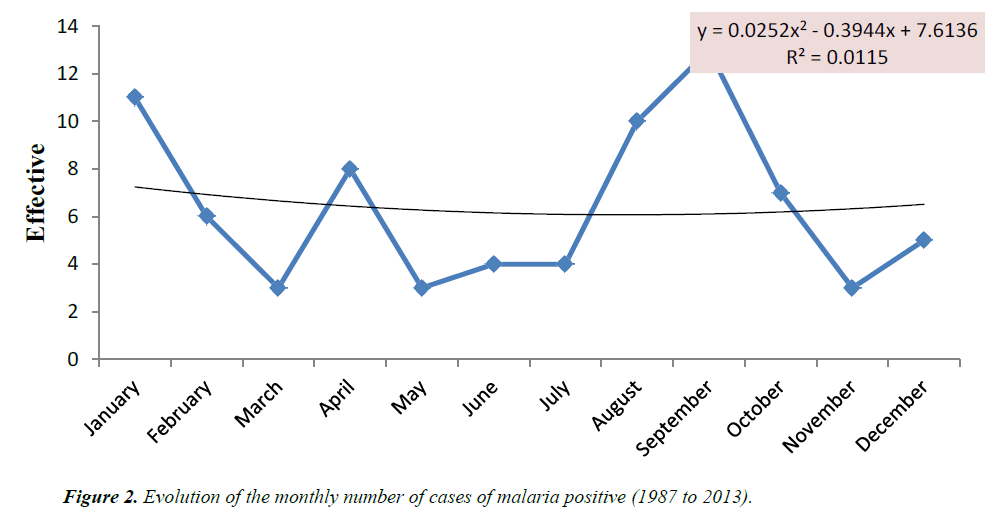 If imported malaria was present throughout the year, there appears to be a consistent seasonal pattern of disease throughout the study period. Frequency peaks (January, April, August and September) correspond to the periods hot and humid (Temperature >18ºC) [3]. It is in January, the summer period of summer when the climatic conditions of temperature and rainfall are favorable to the vector in the endemic zones that the number of recorded cases was in average the most important. For the monthly distribution of imported cases, most authors report that the majority of cases are diagnosed during the period from August to October. They explain this by the departure in endemic areas during school holidays [4,5].

Distribution of malaria cases by country of origin

The African countries from which these cases of malaria are imported in the province of Kenitra are two: the Republic of Guinea, for twelve cases (25%) and the Republic of Niger, for ten (15%), for eighteen cases (23%), for the five countries (Cameroon, Congo, Cote d'Ivoire, Italy), 1% was positive cases during the study period (Figure 3). 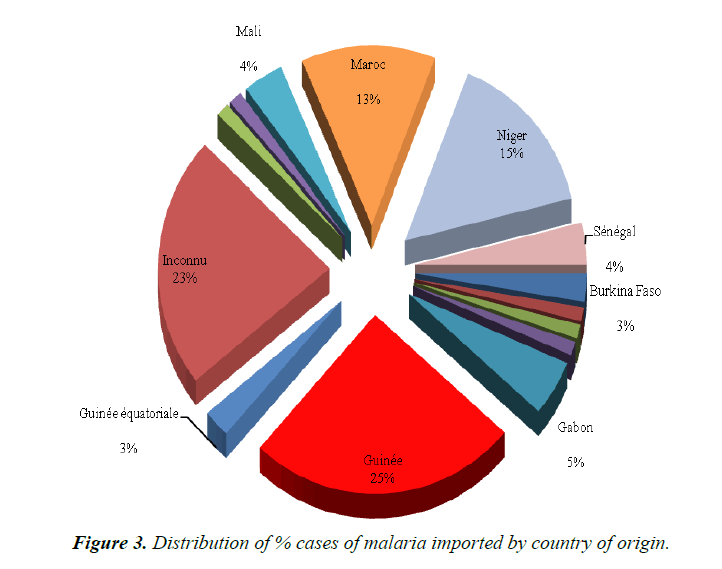 Figure 3. Distribution of % cases of malaria imported by country of origin.

Distribution of total population by sex

The sample studied included 78 patients who were consulted during the period 1987 to 31 December 2013, of which (91%) were male and (9%) were women. Figure 4 shows the distribution of subject by sex.

Indeed, there is statistically significant difference in the frequency of onset of malaria; the study population is composed mainly of male patients (91% with a sex ratio of 9%). These characteristics reflect the nature of the patients in our study; mainly Moroccans brought a mission in an endemic area, or foreigners from endemic areas, trained in Morocco. The latter, when their origin is informed (sometimes incomplete records) come from countries with a strong cooperative relationship with Morocco, namely Mauritania, Equatorial Guinea, Niger, Senegal, Democratic Republic of Congo, Gabon, The Mali.

For all studies, the male-female sex ratio still shows dominance of the male sex during plasmodial lesions [5-8]. This study is consistent with Larhbali's study in the Khémisset region, which found a set of imported male malaria cases over a ten year period, most of which are military personnel mission in Morocco [3].

Distribution of total population by age

In endemic countries, the age group most vulnerable to malaria is less than five years old. In 2013, a rate of 78% of all deaths attributable to malaria involved children less than five years of age. (WHO, 2013) In our study, the distribution of subjects by age showed that (3%) of these patients are aged between 1 and 4 years, and (1%) are between 4 and 5 years of age, whereas (96%) are aged of >15 years (Figures 5 and 6). 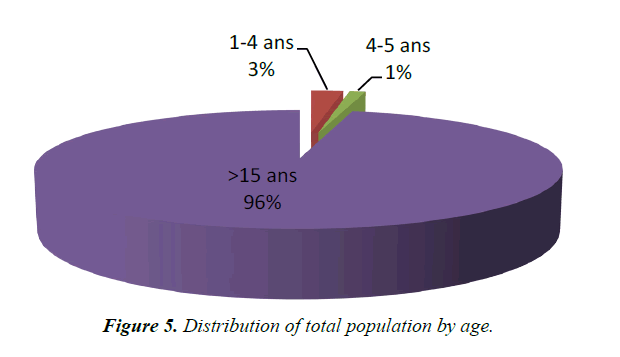 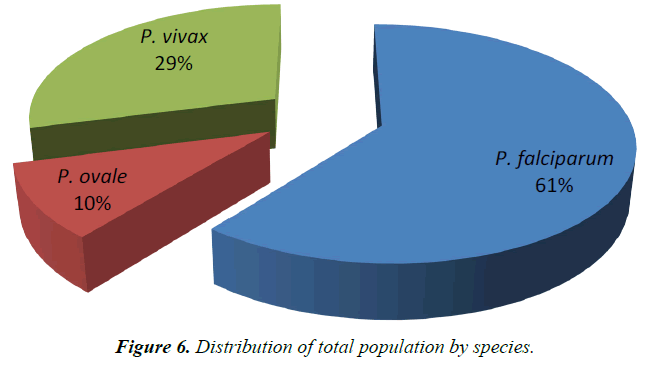 The age of the malarious population is around 30 years, according to most authors, and the comparative study of malarial and a non-malarious traveler in our series shows a statistically significant correlation between young age and plasmodial involvement. A young population is more dynamic, and more exposed to travel, be it for studies, for work or for military service [6-16].

Distribution of total population by species

Imported cases of P. falciparum also mark a peak that is superimposed on the total number of imported cases, as this species is by the most frequent in our series compared to other isolated species (Figure 6). P. falciparum is the most found species in our series, a result similar to that found by Migliani in a study of the French military in Côte d'Ivoire between 1998 and 2006. In their study import malaria in Tunisia concerning 291 cases diagnosed at hospital Rabat Tunis between 1991 and 2006 at the HMMI Rabat (published in 2012) [10].

In Morocco, An. Labranchiae is the main vector of malaria [9,11,12] due to its abundance, density, vectorial capacity and broad geographical distribution. The study of its ecology and its relationship with malaria transmission has been extensively studied in the field [13-15]; however, little data exist its biology particularly in the laboratory. An Labranchiae, a eurygam species whose reproduction can be obtained in captivity only with difficulty and after a period of free flight in a special chamber, hence the difficulty of the stability of the colonies of An. Labranchiae under laboratory conditions to obtain a sufficient number of mosquitoes [16-25].

Through this retrospective study for the period from 1987 to 2013. Our results showed that the number of cases of malaria is high during the years in 1987 and 1988. The presence of malaria cases imported to Morocco due to the presence of immigrants from endemic countries beyond health control due to incubation period of the disease, are also a concern about the introduction of South-Saharan malaria.

In order to ensure regular and more effective surveillance against the reintroduction of this pathology, the objectives of the strategy for maintaining the elimination of indigenous malaria must be applied. With climate change a genetic study of An. Labranchiae is necessary to judge its vectorial capability for Plasmodium falciparum.

We thanks go to all those who have actively contributed to conduct this study in particular: Technicians provincial laboratory of parasitic diseases Kenitra.