The underlying pathology of Isolated Coronary Artery Ectasia (ICAE) still remains unknown; however, endothelial dysfunction (ED) may be responsible for the disease process. The aim of this study was to assess the endothelial functions of patients with ICAE in comparison to patients with normal coronary arteries (NCA) by using flow-mediated dilatation (FMD) in the brachial artery. Thirty patients with ICAE, and 30 control subjects with angiographically NCA were included in this study. The FMD was measured in all patients using a high-resolution ultrasonographic system. The results showed that the baseline brachial artery diameters in patients with ICAE were not statistically different from those in patients with NCA (4.3 ± 0.3 vs.4.2 ± 0.3 mm, respectively, p = 0.265). However, the forearm FMD of the patients with ICAE was significantly lower than the values in the control group (8.5 ± 4.0 vs. 13.7 ± 3.0%, p <0.001). In addition, patients with ICAE have significantly higher levels of low-density lipoprotein (LDL) cholesterol compared to the control group (114.5 ± 28.8 vs. 97.9 ± 31.5 mg/dL, p = 0.03). Therefore, we conclude that patients with ICAE have more severe ED than patients with NCA, which supports the hypothesis that atherosclerosis may be involved in the pathogenesis of coronary ectasia. Hyperlipidemia may have a key role in the disease process.

Coronary Artery Ectasia (CAE) is defined as localized or diffuse dilations of the coronary arteries, which exceed the 1.5-fold adjacent normal coronary segment [1]. Isolated CAE (ICAE) occurs without significant stenosis or occlusion of the coronary artery [2]. The prevalence of ICAE is approximately 0.12% to 1.3% in diagnostic cardiac catheterizations [3,4]. Although the exact pathophysiologic mechanism remains unclear, coronary artery disease (CAD) is the coexisting pathology in more than 50.0% of cases and is generally responsible for coronary ectasia [3,5]. Due to the high coexistence rate of the two pathologies, ICAE is thought to represent a different form of atherosclerosis and vascular remodeling [6,7].

In this study, we aimed to assess the endothelial function of patients with ICAE in comparison to patients with normal coronary arteries (NCA) by using FMD in the brachial artery.

This cross-sectional study consisted of 60 patients who underwent coronary angiography at the Faculty of Medicine of Afyon Kocatepe University between January 1, 2007 and January 1, 2009. Out of the total, 30 patients (mean age 47.3 ± 6.9 years; 17 men) had ICAE while 30 age- and sex-matched patients (mean age 48.4 ± 6.2 years; 19 men) with normal coronary angiograms were used for the control group.

Coronary angiography was performed using a Siemens Axiom Artis angiography device with a standard Seldinger’s technique. In order to evaluate each coronary artery, at least four views from left and two views from right system were taken. Angiographic images were evaluated by two independent researchers.

All patients were evaluated clinically using ECG and routine biochemical tests. Written informed consent was obtained from all participants and the study protocol was approved by the local ethics committee.

All measurements were performed in a quiet and temperature controlled room (25°C) by a single cardiologist without the knowledge of the angiographic data of the patients. Patients fasted for at least 12 hours before the measurements. Subjects had to rest for at least 10 minutes before the first scan was recorded. A pneumatic cuff placed around the forearm was inflated to at least 50 mm Hg above systolic pressure for 5 minutes. The second scan was recorded 30 seconds before and 90 seconds after cuff deflation. Electrocardiography was monitored continuously throughout the study. All measurements were made at the end diastole incident on the R wave on a continuously recorded electrocardiogram. Cardiac cycles were analyzed for each scan and the measurements were averaged. FMD was calculated by the formula: [FMD (%) = (Brachial artery diameter at 90 s after hyperemia – basal brachial artery diameter) /(basal brachial artery diameter X 100)].

The baseline demographic and clinical characteristics of the patients with CAE and NCA are presented in Table 1. The groups did not differ in terms of age, sex, and body mass index (all p > 0.05). In addition, the risk factors for CAD such as hypertension and diabetes mellitus did not significantly differ between the two groups. The groups were also similar in terms of serum levels of fasting blood glucose, creatinine, total cholesterol, high-density lipoprotein (HDL) cholesterol, and triglyceride. However serum levels of LDL cholesterol was higher in patients with CAE. 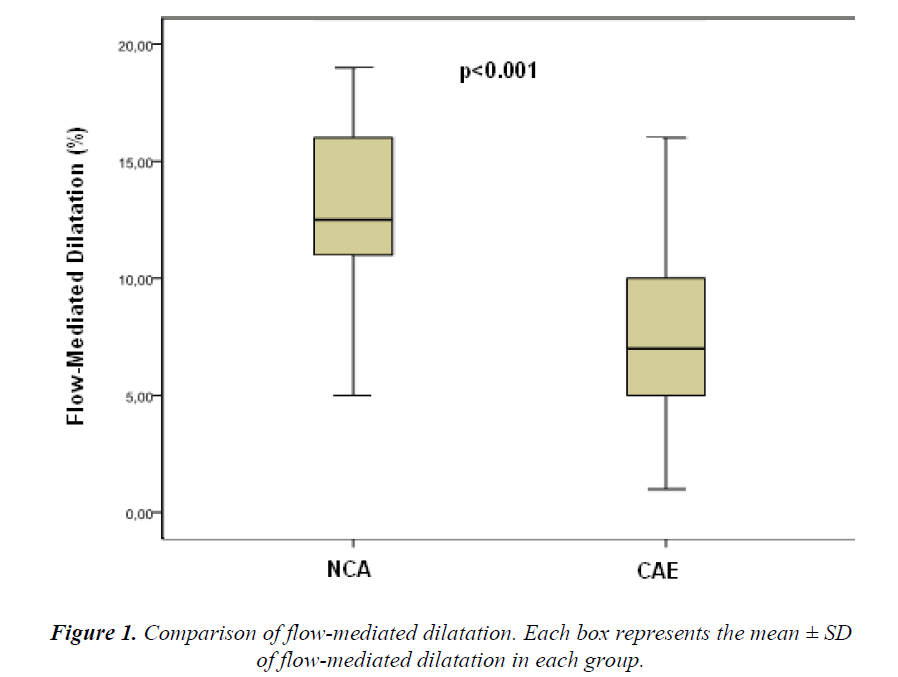 CAE has been suggested commonly as a variant of CAD. Although in several cases, it has been considered congenital or associated with inflammatory or connective tissue diseases, in about half of the cases, the disease coexists with atherosclerotic CAD [15-17]. The clinical presentation of CAE is also similar to CAD. A retrospective study demonstrated that the incidence of angina pectoris in patients with CAE was not different from that in patients with significant coronary artery stenosis [18]. Additionally, the presence of ectatic segments produces slowmoving or chaotic blood flow that causes exerciseinduced angina and myocardial infarction [19].

The cardiovascular risk factors, especially hyperlipidemia, have been shown to play a role in CAE. Sudhir et al. [20] demonstrated increased prevalence of coronary ectasia in familial hypercholesterolemia related to higher levels of LDL cholesterol, lower levels of HDL cholesterol, and hence, a higher LDL/HDL ratio. Similarly, we found significantly higher levels of LDL cholesterol and, to a lesser extent, a higher total cholesterol level in patients with ICAE. It has been hypothesized that structural weakening of the connective tissue elements in the artery wall of ectatic segments may result from interaction of LDL with collagen and elastin, increasing endocytosis by macrophages and smooth muscle cells [21]. Thus CAE is considered to be an original form of vascular remodeling in response to atherosclerosis.

However, it is not clear why only a few of these patients develop CAE, while others do not [11,20]. According to histopathological reports, there is still controversy about which layer of the artery is mostly affected. Several studies suggest destruction of the media layer of the artery [16,22], while others revealed that the underlying histopathological alterations share similar characteristics with coronary atherosclerotic lesions (diffuse hyalinization as well as intimal and medial damage) [15,16].

In this study, we tested the hypothesis that ICAE is a similar disease entity as CAD, which involves the intima of the arterial wall and results in ED. The endothelial functions have been studied before in patients with CAE. Erden et al. [23] compared patients with ICAE and patients with NCA according to their Asymmetric dimethylarginine (ADMA) levels. ADMA is the principal endogenous inhibitor of nitric oxide synthase and is considered to be a marker of endothelial function. They found significantly higher levels of ADMA in patients with ICAE, suggesting ED may be an important factor in the pathogenesis of CAE. Similarly Celik et al. [24] showed increased carotid intima-media thickness (IMT) in patients with ICAE and concluded that atherosclerosis may be involved in the pathogenesis of ICAE. However, another ultrasonographic study demonstrated that carotid IMT was significantly less in patients who had ICAE and cardiac sydrome X compared with the CAD patients, indicating that the mechanism underlying CAE might differ from the ones observed in atherosclerosis [12]

We have investigated endothelial function in the brachial artery using high resolution vascular ultrasound with FMD technique, an accurate and reproducible test that relates mainly to endothelial nitric oxide release in response to shear stress [25,26]. Endothelial function in the brachial artery correlates significantly with that in the coronary vasculature [27], as well as with the extent of coronary disease assessed angiographically [28].

We have detected that the ICAE group had lower values of FMD showing ED. Our findings support the hypothesis of atherosclerotic involvement in the disease process. FMD of patients with ICAE has been investigated previously. Aksoy et al. [10] studied FMD, and nitratemediated dilatation (NMD) in patients with CAE in combination with CAD (CAE + CAD) and patients with CAE alone. They found that FMD of the patients with CAE +CAD did not differ from that of patients with CAD alone, indicating that the destruction of intima layer was similar. However, NMD was significantly lower in CAE+CAD group, suggesting the main region of destruction was the media layer in CAE group. On the other hand, Kim et al. [12] found that FMD of ICAE group was significantly higher than CAD and cardiac syndrome X groups. They thought endothelial function was normal in ICAE and the reason of ectasia was not atherosclerosis. Interestingly, the NMD of the 3 groups were similar in that study.

The main limitation of this study was the absence of the evaluation of endothelium-independent dilatation with NMD test. The NMD evaluates the underlying smooth muscle function of medial layer. Despite the conflicting findings of CAE studies using NMD, we already knew about the histopathological destruction of the medial layer to some extent. However, the aim of this study was to assess the endothelial functions by FMD to determine if atherosclerosis affected the intima layer during the disease process. The small sample size and lack of the inflammatory markers were the other limitations of this study.

Our results suggest that the pathogenesis of ICAE might be associated with atherosclerotic involvement, which is consistent with previous reports. Hyperlipidemia may have a special role in the disease process; however, further clinical and experimental investigations are required to uncover the exact molecular mechanisms involved in ectasia.