Efficacy of posterior-only decompression, focal clearance, and internal fixation in treatment of thoracic and lumbar tuberculosis

Introduction: Thoracic and lumbar tuberculosis significantly affect the health of people and there is controversy on the therapeutic method.

Aims: Our objective is to investigate the clinical efficacy of posterior-only decompression, focal clearance, and internal fixation in treatment of thoracic and lumbar tuberculosis.

Methods: Totally 53 eligible patients with thoracic and lumbar tuberculosis were selected and divided into group A (27 patients) and group B (26 patients) according to the admission order. In group A, posterior-only focal clearance, pedicle screw fixation, and fusion of titanium web and the grafted bone were applied; while in group B, combined posterior and anterior surgery, namely posterior internal fixation with nail-stick system in the pedicle of vertebral arch to correct abnormalities first and then focal clearance, were applied. The operative time, intra-operative blood losses, drainage time, drainage volumes, and postoperative lengths of stay were compared between the two groups, and the time to fusion of the grafted bone, degree and rate of correction of kyphotic abnormality, and ASIA impairment scale of neurologic function were followed up.

Conclusions: Posterior-only decompression, focal clearance, and internal fixation in treatment of thoracic and lumbar tuberculosis have small operation wound and has definite effects of spinal reshaping and fusion.

Inclusion criteria: Patients with thoracic and lumbar spinal tuberculosis and aged 18-70 years old; the involved vertebral body is mainly at single level; the continuous involved vertebral bodies in the skipped spinal tuberculosis is within 1 motor unit; there is big sequestrum or cavity in the damaged vertebral body; spine malformation, instability and dislocation are progressively aggravated; there are obvious clinical symptoms and neurologic function injury; the patients agree to participate in this study and sign the informed consent.

Exclusion criteria: Patients with dysfunction of important organs such as heart, liver and kidney who cannot tolerate the surgery; patients with multi-segmental large paraspinal abscess or flowing abscess; Patients complicated with lung tuberculosis received standard chemotherapy for 2 w and the toxic symptoms are not alleviated; Patients with multi-segment vertebral involvement or severe collapse; Patients with thoracic and lumbar vertebral body trauma or surgical history; Some diseases that can affect the evaluation such as congenital vertebral deformities. This study is approved by the Ethics Committee in our hospital.

53 patients with thoracic and lumbar tuberculosis who met the criteria were selected, including 29 male patients and 24 female patients. The age was 27-69 (45.90 ± 12.71 y old); the disease course was 1-3 (1.42 ± 0.37 y). The tuberculosis location: at thoracic vertebra (T9, T10) in 13 cases, at thoracic and lumbar vertebra (T11-L2) in 16 cases and at lumbar vertebra (L3, L4) in 24 cases. The American Spinal Injury Association (ASIA) impairment scale [12,13]: 6 cases of grade B, 30 cases of grade C, 13 cases of grade D, and 4 cases of grade E. 16 cases had no obvious paraspinal abscess and 37 cases had slight paraspinal abscess; the main manifestation by imaging examination: there was damage or collapse of vertebral body, sequestrum formation, epidural or paraspinal abscess, kyphotic abnormality or spinal cord compression. 53 patients were divided into group A (posterior-only focal clearance, pedicle screw fixation, and fusion of titanium web and the grafted bone) and B (combined posterior and anterior surgery, namely, posterior internal fixation with nail-stick system in the pedicle of vertebral arch to correct abnormalities first, and then focal clearance) according to the admission order. The preoperative baseline data of two groups were not statistically different (p>0.05).

The patients received standard anti-tuberculosis medicine treatment, the Erythrocyte Sedimentation Rate (ESR) decreased to 30 mm/1 h, the tuberculosis was effectively controlled, the hypoalbuminemia was corrected and the nutrition supply was sufficient.

Group A: The patients received tracheal intubation and anesthesia. The patients were at prone position. The diseased segment was located by C arm X-ray machine, the diseased vertebral bodies and upper and lower 2-3 vertebral bodies were exposed layer by layer, and the transverse processes were exposed at both sides. The diseased vertebral body and the transverse process of its upper vertebral body were removed for decompression, and then the pedicle screws were screwed in the upper and lower adjacent normal vertebral bodies. The zygapophysial joints at the severely damaged side of vertebral body were removed to clean the focus, the damaged lesion at anterior vertebral body was cleaned along with the vertebral edge. Curet and Tian’s spinal osteotome were used to remove the diseased vertebral body and intervertebral disc. In the patients with paraspinal abscess, the abscess was cleaned forward from intertransverse space, the excised transverse process or ribs based on CT localization. After the lesion was cleaned, hydrogen peroxide and 0.9% sodium chloride injection were used to repeatedly flush the surgical field. The bone graft bed was reconditioned, a proper amount of iliac bone was made into small bone pieces, and mixed with streptomycin and isoniazid for intervertebral bone grafting; or titanium mesh with a certain length and diameter was taken to be filled with autogenous bone. The fixing rod was reinstalled at the target side, after the kyphotic abnormality correction, vertebral body restoration and internal fixation position were confirmed by X-ray, the surgical field was flushed again. After confirming that there was no spinal cord or nerve root compression, the vertebral plate, zygapophysis and transverse process of diseased segment were fused by bone graft, the drainage tube was place and the incision was sutured.

Group B: The patients received tracheal intubation and anesthesia. The patients were at prone position. First the patients received posterior internal fixation with nail-stick system in the pedicle of vertebral arch to correct abnormalities and then the incision was sutured. After that the patients were at the lateral position, and focal clearance was completed through extra pleuroperitoneal approach by repeatedly flushed by hydrogen peroxide and 0.9% sodium chloride injection. The bone bed was reconditioned for bone graft, and drainage tubes were placed through anterior and posterior approaches, and then the incision was sutured.

The drainage tube was kept for 24-72 h. Infection prevention, nutrition support, and immunity improvement was applied. Triple or quadruple anti-tuberculosis medicine treatment was given. The patients were allowed to start ground activity with thoracic and lumbar support after bed rest for 3 w. Neurotrophy and rehabilitation therapy were given to promote neurologic function recovery.

The comparison of surgical related indexes between two groups

As shown in Table 1, the operative time, intra-operative blood loss, drainage time, drainage volume, and postoperative length of stay in the group A were better than the group B, which were statistically significant (all p<0.05).

Table 1. The comparison of surgical related indexes between two groups.

As shown in Table 2, after 1 year the correction degree and rate of Cobb angle in the group A were better than the group B, which were statistically significant (both p<0.05).

Table 2. The comparison of Cobb angle before and after surgery between two groups (͞x ± s).

Table 3. Comparison of neurologic function ASIA scale before and after surgery between two groups (case).

The classical cases are shown in Figures 1-3. 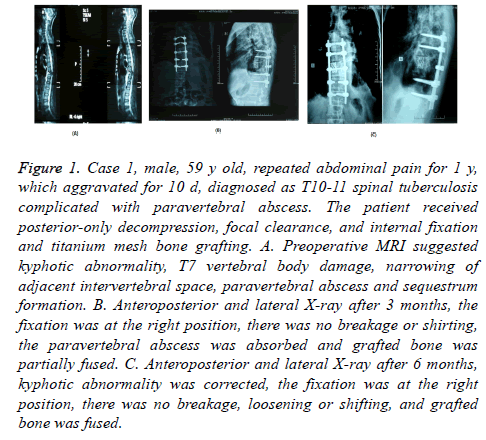 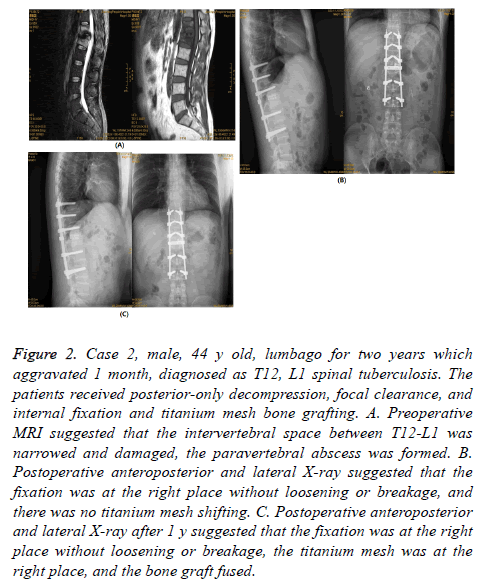 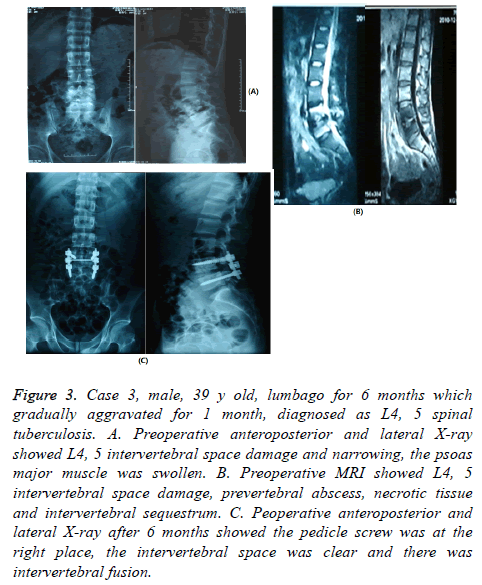 The therapeutic regimen of spinal tuberculosis

In the recent years, the resurgence of tuberculosis is obvious and the morbidity is increasing year by year due to the increase of floating population, increase of immunosuppressant administration and immunodeficiency patients and the emerging of drug-resisted tubercle bacillus [14-16]. The therapeutic principle of spinal tuberculosis includes thoroughly focal clearance, spinal decompression and recovery, and the reestablishment of spinal column sequence and stability [13,17,18]. Anterior-only surgery can more directly clear the lesion, however there are risks such as vessel and ureter injury, and thoracoabdominal cavity infection. Furthermore, in the clinical practice it is found that it tends to cause fixation loosening, collapse, malformation correction failure and nerve compression [19,20]. In anterior and posterior surgery, the therapeutic effect is definite due to the anterior focal clearance and bone graft and posterior internal fixation. However, the surgical injury is big and the occurrence rate of kyphotic abnormality is high, which have limited the application. In posterior-only surgery, pedicle screw was used for 3 column fixation, the fixation strength is strong and the spine is fused at 360º, which had obvious advantage in restoring the spinal stability and correcting the kyphotic abnormality [21-23]. Some researchers have reported that in the patients received anterior or posterior internal fixation to treat thoracic and lumbar tuberculosis respectively, the results showed that posterior surgery has more advantages in correcting kyphotic abnormality and maintaining spinal stability [5,24,25]. Some other researchers have shown that a large number of patients with spinal tuberculosis treated by conservative therapy can be self-cured. That is because the control of tuberculosis depends on the anti-tuberculosis drug and improvement of the immune function, and in posterior surgery the lesion can be cleared extensively and the tubercle bacillus focus can be damaged to transfer the tubercle bacillus from resting stage to proliferative stage, which is beneficial to postoperative anti-tuberculosis treatment [10,26]. At present, there is controversy about the surgical regimen of thoracic and lumbar tuberculosis [10,27,28].

In this study, the patients with thoracic and lumbar tuberculosis received posterior-only surgery and anterior and posteriors surgery respectively, the results showed that the operative time, intra-operative blood loss, drainage time, drainage volume, and postoperative length of stay in the former one were better than the latter one, suggesting that posterior-only surgery causes smaller injury. During 1 y follow up, the time to fusion of the grafted bone was similar, the degree and rate of correction of Cobb angle and ASIA scale were not different between two groups, suggesting that although posterior-only surgery can only relatively thoroughly clear the lesion, it doesn’t affect the clinical therapeutic effect. Further results showed that after 1 year, the degree and rate of correction of Cobb angle in group A were better than group B, suggesting that posterior-only surgery is better in correcting malformation and maintaining the stability of spinal mechanic stability. The reason may be that the modified bone fragment, the bone graft implanted between vertebral plates, facet joints and spinous processes through posterior approach reestablished the three-column structure of spine. The subhealthy bone tissue kept during the surgery can transform to normal bone tissue after standard antituberculosis treatment, which provides a basis for spinal stability [29-32].

The advantages and implementation notes

In this study, the results showed that posterior-only surgery in thoracic and lumbar tuberculosis have the following advantages: focal clearance, intervertebral bone grafting, kyphotic abnormality correction and pedicle screw fixation were all competed in one-stage surgery, it was not necessary to change patient position, the surgical injury was small, the postperative recovery was fast, the length of stay in hospital was shortened and the would infection rate was decreased; the bone graft can be implanted between vertebral bodies, vertebral plates or spinous processes, which can fuse the spinal in 270º range; The bone grafting was completed under a direct vision, the spinal compression was thorough, the protective effect to spine cord was better and it can also effectively avoid the vessel injury caused bleeding; Pedicle screw system is throughout the whole 3 column spine and the reestablishment stability was good which was beneficial to correct kyphotic abnormality; less contact between internal fixation and tuberculous focus can decrease internal fixation infection and increase the operative successful rate; exposed posterior structure is beneficial for postoperative drainage and promoting recovery; during posterior-only surgery the following points should be paid attention to: the posterior column structure was damaged during the surgery which possibly increased the instability; if the lesion is extensive and the surgical field is limited, surgeons can only operate with surgical equipment and hand feel, thus the lesion cannot be thoroughly cleaned; Posterior decompression can expose the spinal cord, thus the spine cord should be protected during the surgery; the abscess at the surface of psoas major muscle is difficult to be cleared, thus needle puncture aspiration or tube drainage are needed.

In conclusion, posterior-only decompression, focal clearance, bone grafting, internal fixation and kyphotic abnormality correction in the treatment of thoracic and lumbar tuberculosis have small surgical injury and definite effects of spinal reshaping and fusion, and the postoperative recover is fast. However, a large-scale follow up and longer therapeutic effect are needed.