Background: To explore the effect of Oxymatrine (OM) on cell-matrix adhesion of human hepatoma cell line QGY-7703 and the expression of integrin β1.

Methods: The effect of OM on cell-matrix adhesion of human hepatoma cell line QGY-7703 was determined with cell adhesion assay and the effect on the mRNA and protein expression of integrin β1 in QGY-7703 cells was detected by quantitative PCR and Western blot.

Results: Compared with the control group, QGY-7703 cell-matrix adhesion in the group treated with 1 mg.mL-1 OM was not inhibited, while the groups treated with 2.5 mg.mL-1 and 5 mg.mL-1 OM treated cells (P<0.05) was significantly inhibited (p<0.05), accompanied by the decreased mRNA and protein expression of integrin β1 (P <0.05).

Conclusion: In vitro OM can inhibit the cell-matrix adhesion and mRNA and protein expression of integrin β1 of human hepatoma cell line QGY-7703.

Oxymatrine (OM) is the main component of alkaloids in Sophora japonica, Sophora flavescens and Sophora alopecuroides and its molecular formula is C15H24N2O. Some studies have shown that oxymatrine has anti-virus, anti-liver fibrosis, antiarrhythmic, anti-inflammatory effect [1-4]. Not only that, OM was also found to have an effect on anti-tumor. For example, OM can inhibit proliferation and migration of human glioblastoma cells by induction of apoptosis [5]. It is now demonstrated that oxymatrine has a significant inhibitory effect on hepatocellular carcinoma cells, which may be achieved by inhibiting cancer cell division and reducing cytotoxicity [6,7]. However, it has also been found that OM, at the dose of 320 mg/kg, has a damaging effect on liver [8]. Integrin β1, a member of the β sub-family, forms dimers with eight different α subunits in vertebrates [9]. Some researchers suggested that β1-null cells from various types of cancer became sensitive to chemotherapy and radiotherapy, because integrin β1 regulates viability and proliferation [10-12]. Cellextracellular matrix adhesion is a fundamental process that is important in multiple hallmarks of breast cancer, including conferring a proliferative advantage, inducing pro-survival pathways and driving cell migration and invasion [13,14]. Both integrin β1 and cell-extracellular matrix adhesion are related to the onset of human cancers [12,14]. It has not yet been clearly reported that OM plays a role in the migration and invasion of liver cancer cells. Therefore, the aim of this study is to investigate the effect of different concentration OM on the cell adhesion of human hepatocellular carcinoma cell line QGY-7703 and integrin β1 expression, and related possible molecular mechanism.

The Matrigel gel was coated on each well of a 96-well plate and the extracellular matrix was imitated with Matrigel. The cells were then digested with trypsin for 48 h to adjust the cell density to 2.5 × 10 mL-1, and the 100 μL cell suspension was added to the 96-well plate. The plates were incubated for 3 h at 37°C, the supernatant was removed, washed twice with 1 × PBS and 100 μL bovine serum albumin (0.5%) was added to each well at 37°C to block for 2 h, again remove the supernatant, wash with 1 × PBS twice. Five wells were set in each group, and placed in 37°C incubator for continue culture. The supernatant were removed at 30, 60 and 90 min after culturing, and the cells were washed three times with PBS to wash off cells that did not adhere. Then, 100 μL RPMI 1640 complete culture medium and 100 μL MTT were added to each well, and placed in 37°C incubator to continue culture for 4 h. Then, take the culture plate and, centrifuge at room temperature for 5 min at the speed of 3000 r.min-1. Afterwards, the supernatant was discarded and 100 μL DMSO was added to dissolve the granules. The plates were placed on a shaker and shaken at room temperature for 20 min. The absorbance values (A570 nm) at wavelength of 570 nm were measured with a microplate spectrophotometer.

The cells in logarithmic growth phase were seeded in 24-well plate (2 × 104/well), 1 mL per well. After cell adherence, OM was added and the cells were incubated for 48 hours. Then RIPA lysis buffer was added to prepare cell protein samples. 6% SDS-PAGE was used for electrophoresis, which was then electro transferred to the nitrocellulose membrane, and placed in blotto buffer at room temperature for 2 h. After that, the membrane placed in the corresponding antibody (anti-integrin β1 antibody or rabbit anti-actin antibody, 1:100 or 1:500 dilution) blotto, shaken overnight at 4°C, washed with TBST for 3 times (5 min/time). The membrane was placed in blotto containing the corresponding secondary antibody (HRPlabelled goat anti-mouse or goat anti-rabbit IgG antibody), shaken at room temperature for 1.5 h at room temperature, washed with TBST for 5 times (5 min/time). ECL was used for luminescence and the relative density of integrin β1 was analyzed by using image analysis and processing system software for exposure, development and image acquisition. The optical density of each protein band was scanned. In order to calculate the ratio of the optical density of the integrin βl band to the optical density of the corresponding GAPDH (internal reference) band, the corrected integrin β1 expression intensity value was calculated. The expression of integrin β1 in the experimental groups was compared. The expression of the control group was considered as 1, the expression of integrin β1 in the experimental groups was calculated and the histogram was obtained.

Effect of OM on matrix adhesion of QGY-7703 cell 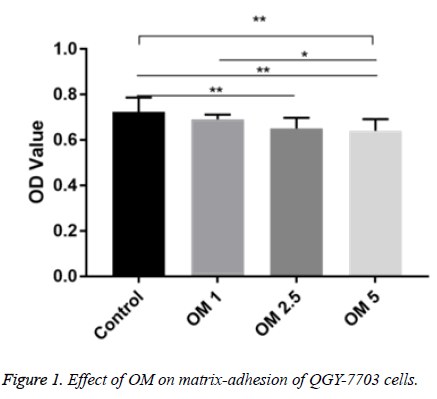 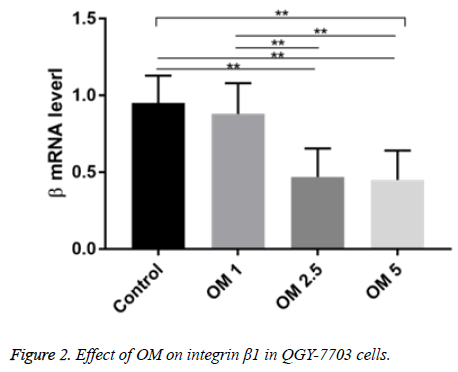 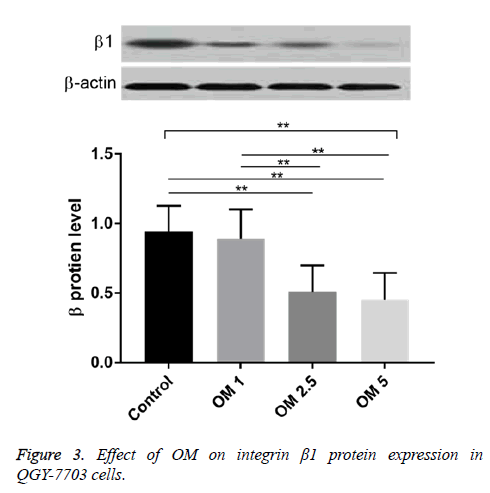 Hepatocellular carcinoma is the fifth most common type of cancer in the world and is the third leading cause of cancerrelated mortality worldwide [15]. The high mortality of liver cancer is mainly due to high recurrence and metastasis. Liver cancer metastasis is an extremely complex “multi-step” process, liver cancer cells leave the primary tumor and invaded into blood vessels and lymphatic vessels through the extracellular matrix (extracellular matrix, ECM), then the metastases was formed [16]. In this process, the combination of hepatoma cells and ECM is the initial step of invasive growth and distant metastasis of hepatocarcinoma cells [17]. A recent study showed that OM inhibits hepatocyte apoptosis by suppressing the TLR4/PI3K/Akt/GSK-3β signalling pathway [18]. OM has a variety of pharmacological actions. It has a protective effect on ischemic and reperfusion injury in liver, and the intestines and heart via its anti-apoptotic and antiinflammatory activity [19-21]. As a result, this study first used the cell adhesion test to detect the effect of OM on matrix adhesion ability of liver cancer cells. The results showed that OM at higher concentrations (2.5 and 5 mg.mL-1) could inhibit the adhesion of hepatocarcinoma cells to matrix. Cell adhesion molecules are one of the important factors of tumor metastasis, tumor metastasis in the various steps involved in the number of cell adhesion molecules or functional changes. Cell adhesion molecules (CAMs) are a class of transmembrane glycoproteins present on the cell surface or ECM that mediate cell-cell or cell-ECM contact with each other by binding to the corresponding ligand on the cell or ECM surface combination. The results suggested that OM at higher concentrations (2.5 and 5 mg.mL-1) can inhibit the expression of integrin β1 mRNA and protein. The integrin family is a large group of cell adhesion molecules, widely expressed in a variety of tissue cells, which is a heterologous dimer composing of theα and β subunits of transmembrane protein through non-covalent bond and plays an important role in mediating cell ECM adhesion. Some studies have shown that in tumor cells, expression and function of integrin often have significant changes that have promoting effect on the adherence, migration and invasion and angiogenesis of tumor cells. In hepatocarcinoma cells, the expression of integrin β1 was significantly enhanced, playing a key role in the invasion and metastasis. Therefore, after confirmation the inhibitory effect of OM on matrix adhesion in QGY-7703 cells, the integrin β1 expression after OM treatment was determined.

The results demonstrated that the mRNA and protein expression of integrin β1 in QGY-7703 cells in OM treatment groups were significantly lower than that in the control group (P<0.05). However, whether there is a direct causal relationship between the two still need to be further verified in subsequent studies.