We investigate the effects of Hypericum perforatum (HP) and Hippophae rhamnoides (HR) extracts on indomethacin-induced gastric injury. Rats were divided into five groups each containing 10 animals. The first group received HP extract, the second group received HR, and the third group received a combination of HP:HR extract at a ratio of 60:40. Fourth group had indomethacin (control group). Fifth group was untreated healthy group. First four groups of animals were gavaged indomethacin and the degree of gastric injury was recorded. Glutathione (GSH), malondialdehyde (MDA) and DNA injury products from the gastric tissue were measured. In the indomethacin-treated control group, the ulcer area was 78.8±2.5/mm2 and was significantly larger than the animals of HP, HR, HP+HR groups. When the groups were compared with the indomethacin-treated control group for GSH, MDA and DNA injury, the differences between all the groups were statistically significant. The mixture of HP and HR extracts showed maximum protective effects on indomethacin-induced gastric injury.

Gastric ulcers are multifactorial and recurrent disorders that are frequently seen today. Gastric lesion results as a consequence of impaired balance between gastroprotective factors such as mucus, bicarbonate and prostaglandins, and gastro-destructive substances [1]. Nonsteroidal anti-inflammatory drugs (NSAIDs) damage the structure of these protective factors and result in negative effects on the stomach [2]. In gastric injury, it has been shown that NSAIDs cause oxidative injury by the effect of reactive oxygen products on the gastric mucosa [3, 4]. Many drugs and plants have been investigated for their healing effects on gastric ulcer [5]. In spite of many studies performed, there is no definitive treatment for gastric ulcer. In this study, centaury oil extracts known as Hypericum perforatum (HP), investigated for its effects on gastric ulcer, is obtained from the St John’s wort plant. HP, which belongs to the Clusiaceae family, is found in the natural vegetation of Europe and Asia. This plant contains flavonoid, tannin, carotenoid, choline and various amino acids [6, 7]. There are studies investigating the effects of plant extracts on oxidative stress [8, 9]. As a part of conventional treatment, they have been used in the management of different diseases in many different cultures. Although its most widely known effect is that on mild or moderate depression, the antipyretic, antispasmodic, analgesic and antimicrobial effects have also been reported. Its therapeutic effect has been demonstrated in neurological disorders such as migraine, bronchial and urogenital system inflammations, some skin diseases and ulcer [10-13].

Another oil extract investigated in the study was sea buckthorn oil, obtained from the Hippophae rhamnoides plant. Hippophae rhamnoides L. (HR) is a member of the Eleagnaceae family [14]. This plant comprises carotenoid (α,β,γ), riboflavin, Vitamin C, tocopherole, tocotrienol, folic acid and tannin [15, 16]. The antioxidant, antiulcerogenic, radioprotective, antitoxic, anticoagulant and antimicrobial effects of HR has been demonstrated [17]. Many experimental studies showing its antioxidant effects have been performed [18-20].

Fifty Wistar albino male rats weighing between 225 and 235 grams were used in this study. The animals were obtained from Atatürk University Medical Experimental Research and Practice Center. The animals were kept and fed ad libitum in groups before the experiments. They were divided into five groups with 10 rats in each.

The HP and HR plants extracts were provided by Biota Lab. (Bioxcin), Istanbul and Indomethacin was obtained from Deva Holding A.S., Istanbul.

In this experiment, the anti-ulcer activities of HP and HR extracts were investigated in the indomethacin-induced gastric ulcer model in rats [21]. After 24 hours of starvation, the groups of rats received HP oil of 1 ml/kg BW (HP group), HR oil of 1 mg/kg BW (HR group), HP+HR oil of a mixture at a ratio of 60/40 [0.6/0.4 ml/kg BW] (HP+HR group) by gavaging. The control group received distilled water of equal volume as solvent (Indomethacin group). Five minutes following administration of medications, all the groups of rats were gavaged indomethacin at a dose of 25 mg/kg BW. The healthy group did not receive any medications. Six hours following administration of indomethacin, the animals were sacrificed by decapitation. Stomachs of the animals were extracted and the ulcer foci on the gastric surface were assessed macroscopically. The width of the ulcer area on the gastric surface was measured on a paper with mm2 scale. The anti-ulcer activities of sea buckthorn and centaury oil were assessed by comparing with the control group. Glutathione (GSH), malondialdehyde (MDA) and the degree of cellular DNA damage were measured in gastric tissue samples.

From each of the stomach, 0.2 mg of whole gastric tissue was weighed, homogenized in ice with 2-mL buffers (consisting of 0.5% HDTMAB [0.5% hexa desil tri methyl ammonium bromide] at pH: 6 potassium phosphate buffer for myeloperoxidase analyze, consisting of 1.15% potassium chloride solution for thio barbituric acid reactions (TBARS) analysis and at pH: 10.5 phosphate buffer for the superoxide dismutase, total glutathione analysis. The preparation was then centrifuged at 4 °C, 10.000 rpm for 15 minutes. The supernatant part was used for analysis.

The amount of GSH in the total homogenate was measured according to the method of Sedlak and Lindsay with some modifications [22].

The concentrations of gastric tissue lipid peroxidation were determined by using the TBARS, a modified version of the method used by Nabavi [23].

Isolation of DNA from gastric tissue

Approximately 50 mg of DNA was hydrolyzed with 0.5 mL of formic acid (60%, vol/vol) for 45 minutes at 150 °C [25]. The tubes were allowed to cool. The contents were then transferred to Pierce microvials (Sigma Co. Munich, Germany), covered with Kleenex tissues (Kimberly-Clark, USA) cut to size (secured in place using a rubber band), and cooled in liquid nitrogen. Formic acid was then removed by freeze-drying. Before analysis by high-performance liquid chromatography (HPLC), they were redissolved in the eluent (final volume 200 μL) [26, 27].

The amount of 8-OH gua and guanine (Gua) was measured by using a HPLC system equipped with an electrochemical detector (HP Agilent 1100 module series, E.C.D. HP 1049 A), as described previously by Kaur and Floyd [25, 28]. The 8-OH gua levels were expressed as the number of 8-OH gua molecules/105 Gua molecules [29].

The experiment results were expressed as "mean ± standart error of the mean " (X±SEM). The significance of the difference between the groups was determined using the one-way ANOVA test. The Fisher’s post-hoc Scheffe test was performed afterwards. All of the statistical processes were carried out using the “Statistical Package for Social Sciences 18.0 (Armonk, NY, USA) software” and p value of ≤ 0.001 was accepted as significant. 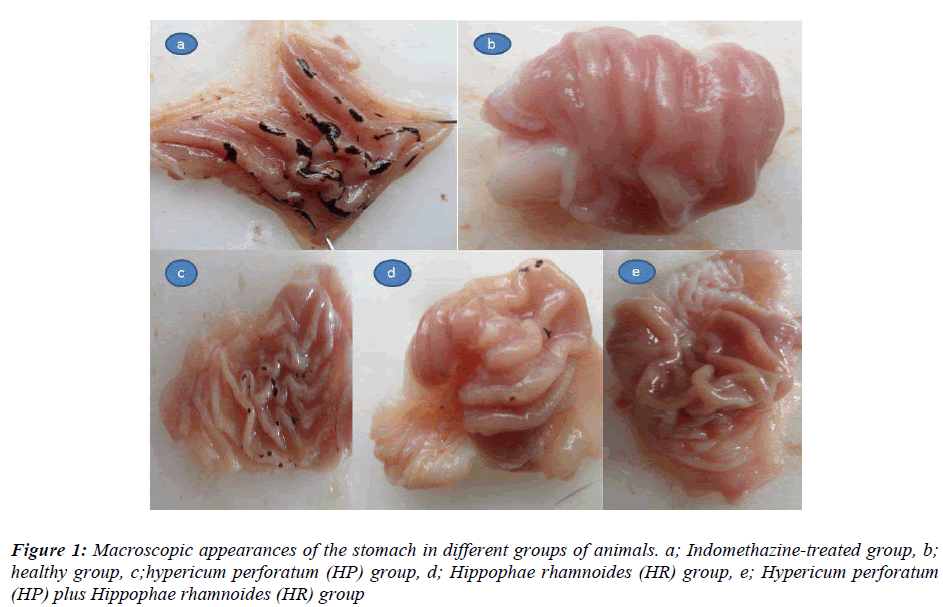 Table 1: Comparison of groups with the indomethacin-treated control group with regard to the ulcer area, tGSH, MDA and DNA injury.

In this study, the effects of HP, HR and a mixture of HP and HR extracts at a ratio of 60:40 were investigated on indomethacin-induced gastric injury and oxidative stress. Experimental studies showed that indomethacin causes gastric injury [30]. In the present study, indomethacininduced gastric injury was found to be protected best by the mixture of HP+HR extract. Present finding confirms the findings of others [11, 17]. In indomethacin-induced gastric injury, it has been shown that the levels of ROS exceed the concentration of antioxidant [31]. In this study, increased tissue MDA suggests an increase in free oxygen radicals. The most important and harmful effect that free radicals initiate in the cell is lipid peroxidation [32, 33]. MDA causes further destruction in the cells [34]. tGSH is involved in cell protection against oxidative injury and metabolic processes of many endogenous compounds such as estrogen, prostaglandins and leukotrienes [35]. As an antioxidant, tGSH reacts with peroxides and free radicals and converts them into harmless products. tGSH protects the cell from the oxidative injury that the free radicals may cause [36]. tGSH also prevents –SH groups in proteins from oxidation by keeping them in the reduced form [37, 38] . It has been shown that in the injured tissues, amount of MDA increases compared to the levels of tGSH [39].

When compared with the control group, the closest results to those of the healthy group with respect to GSH, MDA and DNA damage products were obtained with the HP+HR-treated group. Results obtained with the HRtreated group were more or less similar to that of the healthy subjects than the HP-treated group, which means that the antioxidant effect of HR extract was higher than that of the HP. In spite of the fact that the HP plant possesses hypericin and its derivatives, hyperforin, flavonoids (hyperoside, rutin, quercetin vs), catechin, epicatechin, procyanidin B2, amino acid derivatives (melatonin, GABA), and fatty acids, the antioxidant effects of molecules like carotenoid (α,β,γ), riboflavin, vitamin C, tocopherol, folic acid and tannin in the HR plant seem to be more potent as anti-oxidant [15, 42, 43].

In conclusion, combined extracts of HP and HR compared to an individual extract of HP or HR was found to provide best protective effect on indomethacin-induced gastric injury. However, further research on the molecular basis of action of these herbal extracts in protecting gastric ulceration is very much needed before proposing these herbal mixture as an alternative therapy.