Autotransplantation of teeth with a long dental care history and some influential advantages such as maintaining bone volume, PDL regeneration ability, and allowing dentofacial development has always been a treatment modality for substituting missing teeth [1, 2]. However, in situations where extracted healthy tooth immediate transplantation could not be attained, autotransplantation with the use of a teeth bank adds a new dimension to treatment planning. In this aspect, it is compulsory to preserve living cells and tissues in a structurally-intact status and, more importantly, to prevent intracellular ice formation. The establishment of a newly-developed freezer using a magnetic field called “Cells Alive System” (CAS) has been used for cryopreserving food, for achieving the goal of proper freezing and maintaining original fresh tastes, and more recently for teeth, where cell damage caused by intracellular ice formation could be prevented. The magnetic field vibration function prohibits water molecules from creating clusters during the freezing process [3]. It is generally known that appropriate PDL regeneration after autotransplantation can have a direct affect on enhancing the transplantation success rate and improving prognosis [4-6]. Moreover, based on the above-mentioned clinical findings, a CAS freezer may also be helpful in the survival of PDL cells after cryopreservation. In our previous study, the optimal conditions (15 minutes hold-time at - 5℃ followed by -30℃ plunging temperature and 0.01 mT magnetic field intensity) needed for survival and viability of PDL cells using CAS freezers were determined [7]. After the program freezing procedure, teeth were transferred to a -150℃ deep freezer (MDF-11561; Snyo, Osaka, Japan) for three months. Other studies regarding the effects of cryopreservation with normal freezers on PDL tissue have been performed [8, 9, 10]; however, cryopreservation of teeth with the use of CAS freezers has never been investigated. The revascularization capability of transplanted teeth with incomplete root formation (immature teeth), which is related to pulp viability, is of the utmost importance. Although a few studies have been conducted to examine pulp reactions following cryopreservation [11, 12], consistent conclusions could not be achieved and some indistinct points still remain. According to previous statements, this clinical study was performed with the main purpose of examining the effects of cryopreservation on human periodontal ligament cells using a magnetic field freezer and evaluating the clinical influences of cryopreservation on pulp tissues of immature and mature human teeth.

In this clinical study, we report a 20-year-old patient who came to our dental clinic. After initial dental radiographs (Fig. 1A) and computed tomography imaging (Fig. 1B) had been taken, caries as a result of second molar mesial inclination malposition was observed in the maxilla right first molar. It was decided to extract the first molar and transplant the third molar to the first molar area (Fig. 2A). This case had to be performed with distal movement of the second molar (Fig.1A and B). For this reason, the wisdom tooth was extracted (Fig. 2B), frozen in the CAS freezer, and cryopreserved (Fig. 3A and B) in the deep freezer for 3 months (Fig. 3C) until proper bone regenera tion had occurred, enabling transplantation. One month after donor tooth extraction, orthodontic brackets were bonded correct the tipped back second molar (Fig. 4 A and B). The hole of the reception side was prepared just before donor tooth transplantation by tooth extraction of the first molar (Fig. 5A). On the day of oral surgery, the cryopreserved tooth was thawed in tap water in a bottle (Fig. 5B) and washed several times in sterile saline (Fig. 5C). Transplantation was performed under local anesthesia by a maxillofacial surgeon (Fig. 6A and B). The transplanted tooth was placed slightly below the occlusal plane and splinted with sutures (Fig. 6A). Dental radiograph was taken right after the transplantation for recording and confirming position of the tooth (Fig. 6B). Sutures were removed 7 days postoperatively. The patient was called for a follow-up on the first month after transplantation and every 3-6 months after that for one year. On each visit, primary tests such as mobility and precaution, pocket depth, and tooth vitality with electrical pulp testing were examined and periapical or dental X-rays were taken (Fig. 7A and B). 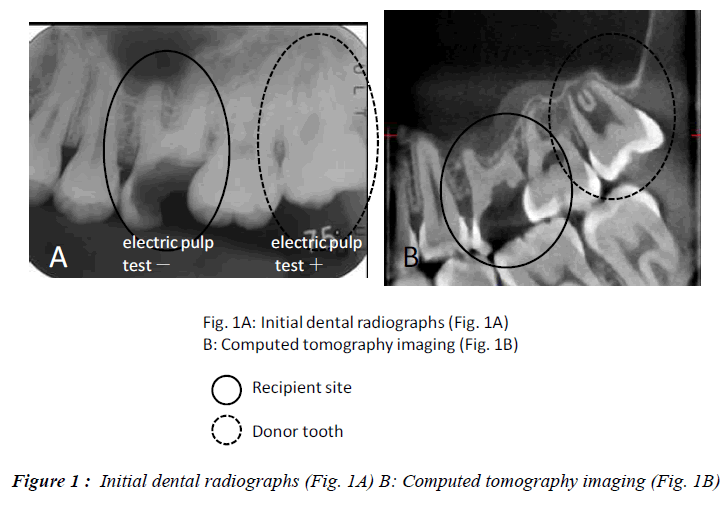 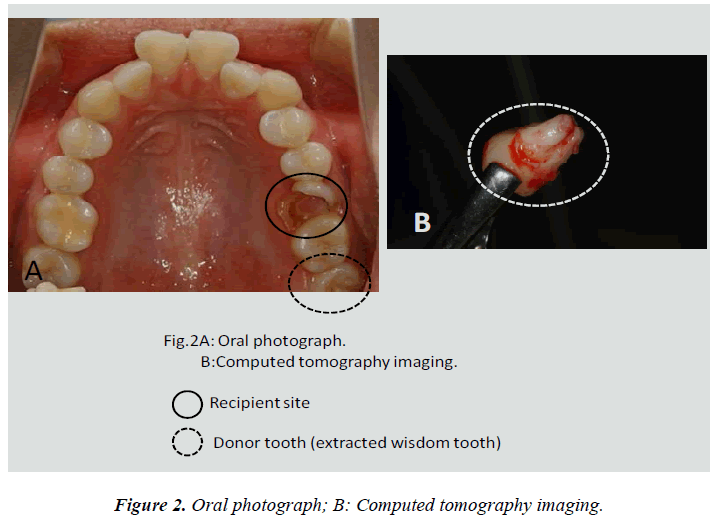 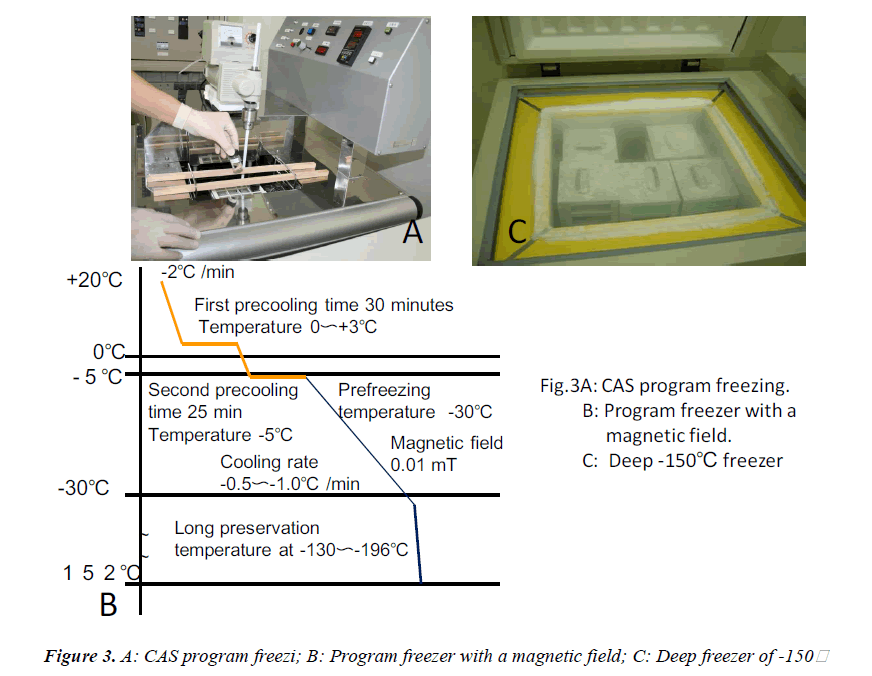 Figure 3: A: CAS program freezi; B: Program freezer with a magnetic field; C: Deep freezer of -150 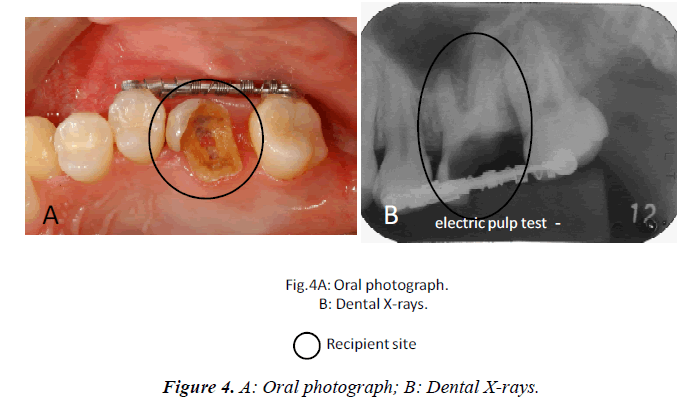 Figure 5: A: Oral photograph of an extracted tooth socket; B: Thawing of the donor tooth; C: Defrosted donor tooth. 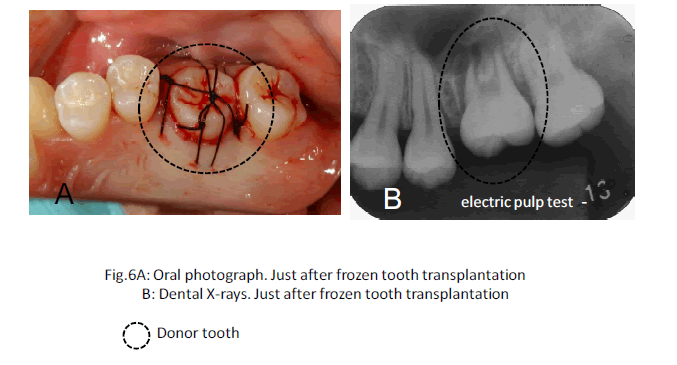 After the first trial of third molar transplantation was performed by Apfel [13] and Miller [14] in the 1950s, several molar transplantations were reported by Nordenram [15], and Walker & Shaeffer [16]. Later, the concept of cryopreservation for storage of human teeth before transplantation, where immediate replantation was not possible or indicated, was created and followed by several investigations [17, 20]. After the development of an innovative programmed freezer with a magnetic field, an influential evolution occurred in the field of tooth banking [7, 21]. In our previous study [7], the importance of applying a magnetic field to cryopreservation of cells was confirmed. The survival rate of cells cryopreserved in the CAS freezer group was significantly higher than that of a normal freezer without a magnetic field. Although a high survival rate of PDL cells after short-term cryopreservation with a CAS freezer was confirmed, whether the pulp of the incomplete root of short-period cryopreserved periodontal ligament cells was included which is the key to success in tooth autotransplantation, was an issue that remained unanswered. In this study, PDL and pulp tissue cryopreserved for three months in the CAS freezer showed no differences in immediate autotransplantation. We performed CAS frozen teeth transplantation in humans [22- 24]. Immediately after transplantation, no response to thermal or electrical stimulation could be found in the cryopreserved immature tooth. This delay (three months after transplantation) was also perceived after transplantation of non-cryopreserved immature teeth [25]. However, transplanted teeth, regardless of being cryopreserved or not, will subsequently respond to electrical pulp testing. The probable reason is that regeneration of nerve fibers after transplantation, in general, takes a longer time than revascularization [26, 27]. Although reinnervation of damaged nerves in cryopreserved teeth with immature root formation needs a longer time than freshly extracted and transplanted teeth with immature root formation, it should be considered that nerve regeneration will only be deferred not eliminated. In addition, root formation after transplanting teeth also depends on the presence in the root apex of a healthy Hertwig’s epithelial root sheath (HERS). HERS plays an important role in root development and if damaged, normal root development will be interrupted [28]. Hence, further investigations regarding the characteristics of HERS cells after magnetic cryopreservation should be performed.