Method: A total of 68 patients who underwent radical mastectomy from February 2015 to January 2017 participated in the study. They were divided into the control group (trachea cannula combined with traditional intravenous anesthesia) and observation group (laryngeal mask inhalation anesthesia combined with epidural anesthesia) according to the type of surgical anesthesia used. Peripheral venous blood cortisol and T-lymphocyte subpopulation (CD3+, CD4+, and CD8+) were tested before anesthesia administration (T1), immediately after anesthesia administration (T2), immediately after radical mastectomy (T3), and 3 days after radical mastectomy (T4). Differences in the stress hormones and immune factors of the patients were evaluated on the basis of the differences in cortisol concentrations and numerical changes in the CD3+% and CD4+/CD8+ values.

Breast cancer is characterized by malignant lesions in breast epithelial tissues and one of the common malignant diseases affecting females [1,2]. Breast cancer patients suffer from damages from radical mastectomy and their bodies often exhibit substantial stress reaction before the operation and after anesthesia administration [3]. These effects increase the risks of postoperative complications, such as septicopyemia and infection and influence operative treatment effects and postoperative rehabilitation [4,5]. Thus considerable attention must be given to the different effects of different anesthesia modes on immunity and stress hormone of patients in clinics. In this study, the effects of simultaneously administering laryngeal mask inhalation anesthesia and epidural anesthesia and performing trachea cannula with traditional intravenous anesthesia on stress hormones and immune factors of patients treated with radical mastectomy were observed clinically during the perioperative periods.

The study included 68 patients who underwent radical mastectomy under general anesthesia from February 2015 to January 2017. The patients were all females and aged 27-63 years (average of 40.83 ± 12.71 years). The disease courses ranged from four months to four years, (1.64 ± 3.27 years in average). The diagnoses performed conformed to the ASA classification (level I-II) and TNM staging (stage I-II). Pathological details are shown in Figures 1 and 2. The clinical manifestations of the patients were as follows: orange peel of skin, nipple lump, hollow and polyrrhea, accompanied with axillary lymph node metastasis. The patients were divided into the control group (trachea cannula combined with traditional intravenous anesthesia) and observation group (laryngeal mask inhalation anesthesia combined with epidural anesthesia) according to the type of surgical anesthesia used. The groups had 34 patients each. No statistically significant difference was observed between the groups in terms of age, course of disease, patient condition, and educational background (P>0.05), and the groups were comparable. All the respondents or their family members provided their informed consents. 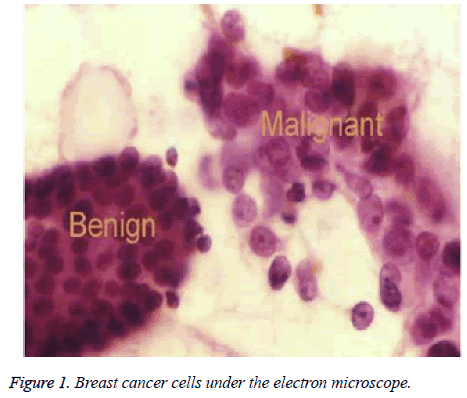 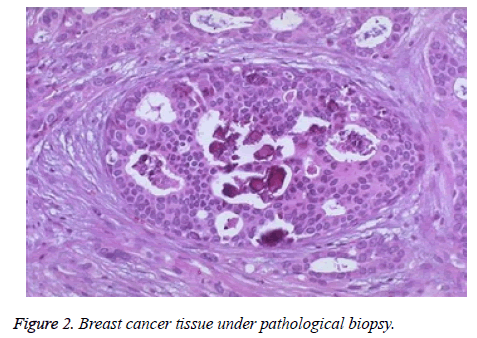 The inclusion criteria in the study were as follows: the patients underwent clinical diagnosis of breast cancer and suggestion on radical mastectomy; had no of cancerous metastasis and other complications, such as cardiac failure, incomplete hepatorenal functions, dysneuria, and diabetes; signed the informed consent form; and provided complete patient data.

Meanwhile, the following were the exclusion criteria: the patients had no surgical indication and underwent conservative therapy; were suffering from fundamental emotional dysfunction, organ failure, or organ dysfunction; pregnant or lactating; had low clinical treatment compliance; and discontinued the program halfway during the research; did not sign the informed consent form; and refused to provide their medical history.

The vein channels of the patients were opened upon entry in the operating room, and their blood pressures, heart rates, blood oxygen levels, and other life indexes were routinely monitored. The index changes of respiratory functions were also monitored with breathing flow sensor. Intravenous drip with 10 mg of diazepam and 0.5 mg of atropin and anesthesia containing 0.2 mg/kg of diazepam and 4 μg/kg of fentanyl were simultaneously administered to each patient 30 min before the operation. The patients were injected intravenously with 1.5 mg/kg of succinylcholine when they were unconscious.

The patients in the control group underwent trachea cannula coupled with traditional intravenous anesthesia when their jaws were completely relaxed. This treatment includes endotracheal intubation and external connection with breathing machine to monitor and control breath. During surgery, the vein was injected with 0.3-0.4 mg/kg diprivan every 30-40 min through a micropump. Meanwhile, the patients in the observation group were treated through laryngeal mask inhalation anesthesia coupled with epidural anesthesia. The size of the laryngeal mask depended on the weight of the patient. Breathing was monitored and controlled in the same manner. The patients underwent a continuous dose of isoflurane through inhalation and received epidural bolus injection with 0.25% 6 ml bupivacaine every 1 h.

Anesthesia administration was stopped immediately at the start of suturing, and the postoperative rehabilitation was observed. The patients left the operating room after the level of oxyhemoglobin saturation and electrolyte normalizes.

From each patient, 4 ml of peripheral venous blood was collected before the anesthesia administration (T1), immediately after anesthesia administration (T2), immediately after radical mastectomy, and 3 days after the radical mastectomy (T4). This procedure was performed on patients with empty stomachs in the morning. The obtained blood samples were placed in anti-freezing test tubes and stored in static under room temperature for 15 min. The samples were then centrifuged at 3000 r/min for 5 min. The serum and plasma of each blood sample were separated and kept under -15°C. The blood samples were collected 3 days after the operation and analysed uniformly. Cortisol concentration was tested through high-performance liquid chromatography to detect the changes in body stress factors. T-lymphocyte subpopulations (CD3+, CD4+, and CD8+) were then tested through ELISA chemical immunization method coupled with flow cytometry to detect the immune index. The CD3+% and CD4+/CD8+ values were calculated and used to express the variations in the immunities of the patients.

Breast cancer is characterized by malignant lesions of breast epithelial tissues and is one of the common malignant diseases among females. Radical operation for such disease must be implemented after diagnosis to prevent metastasis [6]. Otherwise, treatment failure and mistreatment can promote cancer cell proliferation and diffusion to other tissues and organs through blood circulation and lymphatic return. These effects threaten the safety and physical and psychological health of women. Patients with malignant tumors have weak immunity. Thus, damages resulting from radical operations and substantial stress reactions after anesthesia and before the operation can increase the risk of septicopyemia or infection [7,8]. These complications can greatly influence therapy and postoperative rehabilitation. Surgical treatment for breast cancer has been improving gradually in recent years. However, most current surgical technologies remain invasive and sometimes results in secondary cancer metastasis, which is caused by cancer cell diffusion to other tissues and organs through blood circulation and lymphatic return, when the tumor is not eliminated completely [9]. Among the surgical treatments for breast cancer, radical mastectomy remains the most widely applied in clinics. However, these treatment compromises the immunity of patients. Different anesthesia modes have varied effects on immunity and stress hormones. Considering the development in anesthesia technology, this paper mainly discusses whether or not epidural anesthesia and laryngeal mask inhalation technique facilitate the reduction of stress reaction and profound effects on the immunity functions of patients during the intraoperative period.

Laryngeal mask inhalation anesthesia coupled with epidural anesthesia can reduce the profound effects of radical mastectomy on patients. This treatment method is better than complete trachea cannula combined with traditional intravenous anesthesia in terms of reducing stress damages, improving postoperative rehabilitation, and lowering the risk of secondary infection and injuries. In addition, laryngeal masks facilitate ventilation during operation and can be operate easily without the risk of injuring the vocal cords and trachea. Laryngeal masks are safe for patients with cardiovascular diseases. However, laryngeal masks cannot isolate the respiratory tract and esophagus completely and thus may cause wrong aspiration of secretions in the respiratory tract. Thus, the breathing conditions of patients must be monitored closely during the operation.