Objective: This study aims to investigate the effects of berberine on the expression of nuclear factor erythroid 2-related factor 2 (Nrf2)/Heme Oxygenase 1 (HO-1) in retinal cells of diabetic rats.

Methods: The diabetic rat models were established through intraperitoneal injection of streptozotocin. Different concentration (50 mg/kg/d, 100 mg/kg/d, 200 mg/kg/d) of berberine was orally administered to the rats for 4 weeks. After 4 weeks, changes of body weight, blood lipid and glucose were detected, and the expression levels of Nrf2 and HO-1 in retinal tissues were evaluated by immunohistochemistry and Western blot.

Results: Four weeks of berberine intervention decreased blood glucose to below 16 mmol/L. Total Cholesterol (TC), Triglyceride (TG), and Low-Density Lipoprotein cholesterol (LDL) was decreased significantly, while High-Density Lipoprotein cholesterol (HDL) was increased significantly than that in the model group (P<0.05). The expressions of Nrf2 and HO-1 were also decreased in retinal cells after berberine treatment compared with those in the model group.

Conclusion: Berberine can reduce blood glucose level in diabetic rats, improve blood lipid and decrease retinal vascular injury, suggesting it may be associated with the reduced expressions of Nrf2/HO-1.

Diabetic vascular disease is one of the major complications contributing to disabilities and deaths of Diabetes Mellitus (DM), leading to 60%-70% of all deaths caused by diabetics [1,2]. These complications including: retinopathy, coronary heart disease, cerebral infarction, cerebral haemorrhage, lowers extremity atherosclerosis, and plaque [3].

Nuclear factor E2-related factor (Nrf2) plays an important protective role in the oxidative stress in diabetic vascular disease [4]. Through interacting with the Antioxidant Response Element (ARE) on genes, Nrf2 activates the expressions of downstream phase II detoxification enzymes, which plays effects of anti-ROS [5].

Heme Oxygenase 1 (HO-1) is involved in processes like antioxidant, anti-inflammation, apoptosis inhibition, and anti- ROS in cells. The anti-oxidative stress of HO-1 has a protective effect for diabetic microangiopathy [6,7].

Studies [8,9] have shown that the oxidative stress injury of kidney was ameliorated after diabetic mice being fed with 1% tert-Butylhydroquinone (tBHQ). And the expressions of Nrf2 factor and HO-1 are significantly increased, which indicates the up-regulated HO-1 expression is positively correlated to the activation of Nrf2 [10].

Berberine can reduce blood glucose in patients with type II diabetes through anti-inflammation and antioxidant [11]. There is no report about whether berberine can regulate diabetic microangiopathy through intervening oxidative regulation. So we postulate that berberine can protect the endothelial damage in diabetes through activating Nrf2/HO-1 expression. Diabetic Retinopathy (DR) is one of the typical diabetic microangiopathy, so we established type II diabetic rat model in this study. Focusing on retinal vascular disease, we observed the expression changes of Nrf2/HO-1 in retinal vessel of diabetic rats after berberine intervention. Our finding provides insight for the prevention and treatment to vascular complications of diabetes by berberine.

The streptozotocin (Sigma, CA, USA) was prepared with 0.1% pH 4.5 citrate buffer, and then was intraperitoneally injected to rat at concentration of 55 mg/kg to induce diabetes in rats. After injection for 72 h, the tail blood glucose was measured for each rat for three consecutive days. If the blood glucose level exceeded 16.7 mmol/L, then diabetic rat models were successfully established.

Four rat eyes were isolated from rats in each group using a 19G stab knife gently puncturing the anterior chamber. Then eyes were fixed with 4% paraformaldehyde solution for more than 24 h. After dehydration and paraffin-embedding, the samples were cut into 4 μm successive sections. After routine dewaxing, 3% hydrogen peroxide (Beyotime Biotechnology, Shanghai, China) was added and incubated at room temperature within 10 min to inactivate endogenous peroxidase and repair antigen. After blocking by 5% BSA for 20 min, 1:500 diluted antibodies of Nrf2 and HO-1 (rabbit anti-rat, Beijing Bioss Company, Beijing, China) were added respectively. After incubation at 4°C overnight, biotinylated secondary antibody (goat anti-rabbit, Beyotime Biotechnology, Shanghai, China) was added for 40 min at room temperature. Strept Avidin-Biotin Complex (SABC) was added for 30 min and PBS washing was replicated for 4 times. DAB was applied for color development and haematoxylin was used to counter stain lightly for around 2 min. After dealt with hydrochloric acid and xylene, the slides were sealed with neutral gum for observation. We applied Leica DM4000B microscope and Image-Pro Plus Image Analysis system to analyse staining result. Brown or tan reaction regions in retinal area were randomly selected, and the average Absorbance (A) of the selected region was measured in each field by IPP software. Then the average was compared among different groups.

After rat retinal tissues lysis, the lysate was centrifuged at 12000 g for 10 min and the supernatant was stored. The BCA assay was used to detect the protein concentration. The isolated protein was loaded into SDS-PAGE and then transferred to PVDF membrane for 120 min. The primary antibody was rabbit anti-rat Nrf2 and HO-1 (Beijing Bioss Company, Beijing, China). After incubation at 4°C overnight with primary antibody, TBST was used to wash membrane for 3 times. The secondary antibody was HRP-conjugated goat antimouse and goat anti-rabbit IgG. After washing, the membrane was developed by enhanced chemiluminescence plus reagent. We used β-actin as internal reference and applied Image proplus software to scan and estimate the absorbance value of protein bands.

All the data were shown as the mean ± SD, and SPSS 17.0 software was used to analyse data. ANOVA or SNK method was performed to compare differences among groups. The non-parametric test was used if variance was heterogeneous. P<0.05 was considered as statistically significant. 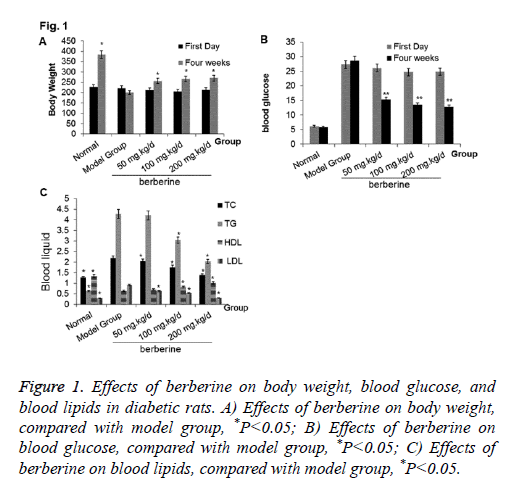 Effect of berberine on Nrf2, HO-1 expression in retina of diabetic rats 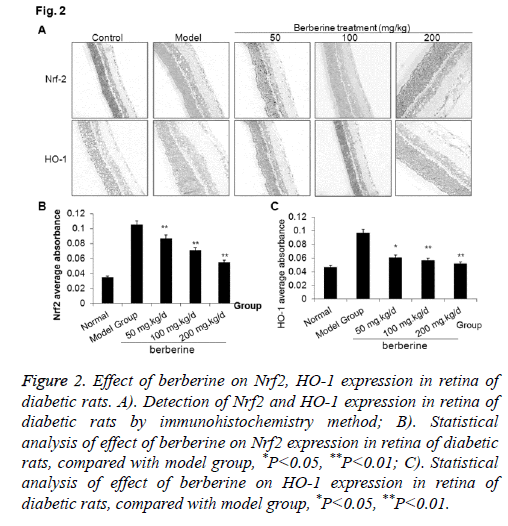 Effect of berberine on Nrf2, HO-1 expression in retina tissues by Western blot 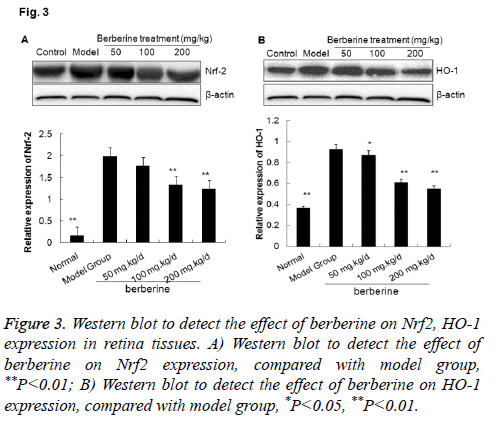 Studies show that high glucose is an important cause for endothelial damages. It induces lipid peroxidation, increases oxygen free radicals, and accumulates oxidized Low-Density Lipoprotein (oxLDL), impairs the tight junctions among endothelial cells and increase permeability [15]. Up-regulated cytokines can induce the reduction of myocardial capillary and the thickness of basement membrane [16]. In this study, body weight was increased and blood glucose was decreased after berberine intervention, indicating that berberine had a certain anti-diabetic effect. Further analysis of the plasma lipid showed that berberine down-regulated TC, TG, LDL and to up-regulated HDL, indicating that berberine can regulate lipid in blood.

As Nrf2 and HO-1 play important roles in the antioxidation in diabetes, we focused on retinal vasculopathy to further analyse whether berberine can reduce diabetic vasculopathy through regulating the expressions of Nrf2 and HO-1.

Under normal condition, the excess of ROS is cleared by antioxidant defense system. But in condition of sustained high glucose in diabetes, large amounts of ROS were produced as mitochondrial dysfunction, and the antioxidant defense system was damaged in this setting. Then ROS damage is induced, which further leads to diabetic vascular complications such as diabetic retinopathy. Nrf2 is a transcription factor and induces self-protection in cells [17]. Nrf2 can activate the expressions of phase II detoxification enzymes and anti-oxidant enzymes to function as anti-ROS [17]. Nrf2 expression is usually increased in diabetes to relieve the injury by ROS stimulus [18,19]. Several studies confirmed that Nrf2 knockout decreased antioxidant genes expression and increased oxidative injury in mouse, indicating that Nrf2/ARE pathway is a key regulator of body’s redox state. Activated Nrf2/ARE signalling pathway can induce up-regulation of antioxidant proteins and antiinflammatory factors. Nrf2 is expressed in a variety of cells in retina, and ROS expression is significantly higher in Nrf2-/- diabetic mouse than in Nrf2+/+diabetic mouse [20].

HO-1 is an antioxidant protein and the rate-limiting enzyme of heme degradation, which participates in antioxidation, antiinflammatory, apoptosis inhibition, and anti-ROS damage. HO-1 expression is significantly higher in type 2 diabetes than in pre-diabetes, which is also positively correlated with large artery disease [21]. The oxidative stress and increased excitotoxicity metabolites in diabetes can induce mitochondrial dysfunction to produce large amounts of free radicals, lipid peroxidation, oxidation reaction vigorously, and apoptosis. When Nrf2 expression is increased, HO-1 is up-regulated significantly, indicating that increased HO-1 expression is mediated by the activation of Nrf2 [22]. Nrf2 is usually localized in the cytoplasm, and enters into nucleus to bind with ARE of genes. Then the down-stream antioxidant genes like HO-1 are induced to express and enhance antioxidant defense [23]. The results showed berberine down-regulated the expressions of Nrf2 and HO-1 in model group, which indicated that the reduction of oxidation reaction by berberine may be associated with the decreased expressions of Nrf2 and HO-1.

In summary, berberine can reduce the level of blood glucose, reduce the expression of Nrf2 and HO-1 in retina of diabetic rats, suggesting inhibition on Nrf2 and HO-1 expression may contribute to the protection mechanism in endothelial injuries in diabetes.