Effects of 1, 25-dihydroxyvitamin D3 on expression of TGF-β1, CD68 and MCP-1 in type 2 diabetic nephropathy rat

Objective: This study aims to investigate the role and mechanism of 1, 25-dihydroxyvitamin D3 in type 2 diabetic nephropathy rats.

Conclusion: Through repressing the expression of TGF-β1, CD68 and MCP-1, 1, 25-dihydroxyvitamin D3 can inhibit invasion of macrophages to protect kidney of T2DN rats.

Diabetic Nephropathy (DN) is one of common and serious chronic complication of Diabetes Mellitus (DM). DN is a severe microvascular complication, which is the common etiology of end-stage renal diseases [1,2]. In recently, a large number of studies [3-6] found that immune inflammatory cells, cytokines, acute phase reactive protein and other inflammatory mediators played important roles in the genesis and development of DN [7]. It is found that Monocyte Chemoattractant Protein-1 (MCP-1) is the main factor for monocyte-macrophage cell aggregation, which directly stimulated mesangial cell to express Transforming Growth Factor beta 1 (TGF-β1) to accelerate renal fibrosis [8]. TGF-β1 is a powerful fibrosis factor, which is involved in glomerular hypertrophy and Extracellular Matrix (ECM) progressive accumulation process through promoting ECM components accumulation, such as synthesis of collagen and fibronectin proteins and inhibition of degradation enzymes for ECM components, and ultimately leads to glomerulosclerosis [9-11].

Recent studies showed that 1, 25-dihydroxyvitamin D3 (1, 25- (OH)2 D3, active vitamin D3, calcitriol) is not only involved in the incidence of type 2 diabetes, but also protects kidney of DN by reducing urinary protein, inhibiting aggregation of ECM, epithelial-mesenchymal, anti-inflammation and Renin Angiotensin Aldosterone System (RAS) [12-18]. In this study, we investigated the protective roles of vitamin D3 in type 2 DN (T2DN) rats and explored the related molecular mechanisms.

The test strip for urinary microproteins was used to measure continuously the morning urine of the T2DN rats after STZ injection at six weeks and seven weeks. If the results were positive, these rats were labeled as T2DN model, and they were continuously measured 24 h proteinuria. The T2DN model rats were given by gavage with 0.03 μg/kg vitamin D3, dissolved in 0.05 ml peanut oil. Meanwhile, the T2DN model group were also treated by equal amount of peanut oil. Three groups of rats were sacrificed after 15 weeks. About 4 to 6 milliliters of venous blood and 24 h-urine prior to sacrifice were collected, and bilateral kidneys were removed and weighted. Renal cortex of 1 mm3 was obtained from the kidney, and then fixed in 2.5% glutaraldehyde. Remaining kidney tissues were fixed in 4% paraformaldehyde.

The light microscope samples were fixed in 4% paraformaldehyde and dehydrated by different concentration of alcohol (70%, 80%, 90%, 95%, and 100%). After hyalinized by xylene, these samples were embedded with paraffin, and then continuously cut into 2 μm sections. Hematoxin Eosin (HE) staining, Periodic Acid Schiff (PAS) reaction, Periodic-Acid-Silver Metheramine (PASM) staining and Masson’s trichrom staining were performed before light microscope examination.

The samples for transmission electron microscope oil were eluted with alcohol. After cutting into 1 mm3 sections, the tissue was immediately fixed with glutaraldehyde liquid and osmic acid at 4°C. After dehydrated by acetone and alcohol, the samples were moved into acetone with epoxy resin, then cut into ultramicrocuts on ultramicrotome with 70-90 nm thickness after epoxy resin embedding, drying, fast repair and location. The sections were stained with uranyl acetate and lead Azusa citric acid, and then subjected to transmission electron microscopy on JEM100CX 2II electron microscope (Image Processing Center of Beihang University, Beijing, China). 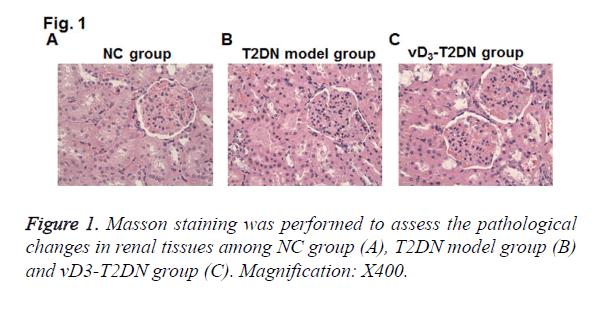 TEM examination of the renal tissues among different groups 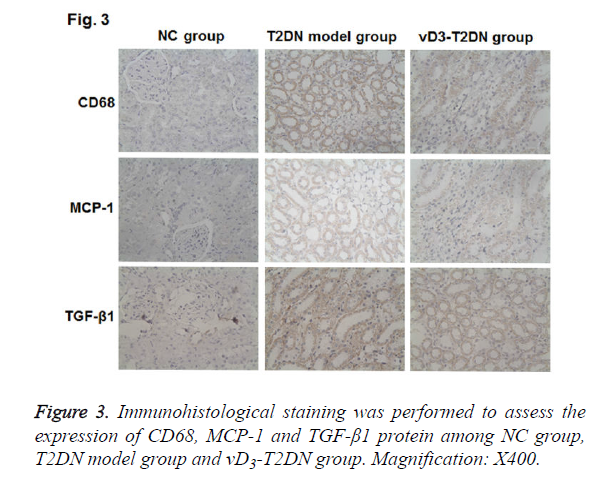 In recent years, several studies revealed that the key factors for the development of DN were inflammation and macrophages infiltration [19]. Moreover, the infiltration of mononuclear macrophages in renal tissues are correlated with accumulation of glomerular Extracellular Matrix (ECM) in glomerular mesangial and renal tubular, which is the characteristic pathological changes of DN [20]. MCP-1 is a cytokine secreted by renal tubular epithelial and mesangial cells, and its main function is to activate mononuclear macrophage, and its expression in renal tissue can serve as a biomarker of inflammation [8,21-23]. Cheng et al. found that MCP-1 could combine with glomerular mesangial cell membrane protein CCR2, which led to activate NK-κB pathway to induce TGF- β1 expression and increase the expression of fibronectin (Fn) in mRNA level and protein level. It was verified that the active TGF-β1 in DN was related to deposition of glomerular ECM [9], expression of type I collagen in mesangial cells [24], increased expression of Fn [25] protein and worsen renal function of DN.

Studies have shown that vitamin D3 plays its biological roles in cells through combining to vitamin specific receptor (VDR) [26-28]. Li et al. found that the diabetic mice with VDR deletion showed strongly active Renin-Angiotensin System (RAS) during their growth and development stage, accompanied with severe renal impairment [29]. However, the kidney injury was significantly alleviated through inhibition of RAS and therapy with vitamin D analogues. Zhang et al. confirmed that vitamin D3 could inhibit the expression of renin and TGF-β1, reduce proteinuria and delay progression of renal failure through giving 1, 25-(OH)2 D3 to VDR knockout mouse model [30].

Furthermore, our results showed that the 24 h urine protein was obviously decreased in vD3-T2DN group, whose kidney injuries were also alleviated, compared with T2DN model group. This result indicated that 1, 25-(OH)2 D3 could protect kidney in T2DN rats. In this study, it was indicated that Vitamin D may reduce proteinuria in diabetic nephropathy, which was consistent with reported clinical trials [32].

We also investigated the protection mechanism of 1, 25-(OH)2 D3 effect on T2DN rats and found that the infiltration of macrophages were significantly decreased in kidney tissues of vD3-T2DN rats, and 1, 25 (OH)2 D3 could reduce the expression of CD68, MCP-1 and TGF-β1 [31]. TGF-β can be induced by angiotensin II, which is a powerful factor for mediating fibrosis [33]. Through stimulating the synthesis of extracellular matrix proteins and reducing the degradation of matrix proteins, TGF-β can promote apoptosis of foot cells, which plays a key role in diabetic glomerulosclerosis [34]. And MCP-1 is monocyte chemoattractant protein-1, which can lead to kidney tissue injury through activating inflammatory cells and prompting the release of soluble medium from inflammatory cells [35]. CD68 is one kind of macrophage marker, and macrophage infiltration plays as an important mediator for renal interstitial fibrosis [36]. In this study, it was indicated that the expressions of TGF-β1, MCP-1 and CD68 were decreased in kidney tissues of DN rat, which further validated that vD3 can alleviate diabetic nephropathy through inhibiting macrophage infiltration in kidney and relieving inflammatory pathways.

Our study suggests that 1, 25-(OH)2 D3 could play protective roles in kidney through reducing the expression of MCP-1 in renal tissues, which inhibits the infiltration of macrophages and down-regulates TGF-β1 expression.

This work was supported by National Natural Science Foundation of China grant (No. 81160116).