Effectiveness of the MAIT® method in patients with Crohn's disease and seronegative arthritis: A preliminary study.

Objective: The objective of this study was to determine if the use of manual manipulative techniques (according to the MAIT® method) in addition to the classical treatment could be effective in the management of enteropathic arthritis of Crohn's patient.

Methods: In the present study, 6 patients with Crohn's disease suffering from IBD (Inflammatory Bowel D isease) relational seronegative arthritis were examined. The subjects were divided into 2 groups; the first group continued the traditional drug treatments, the second group continued the traditional drug treatments and underwent manual manipulative therapies according to the MAIT® method: 2 treatments per week for 4 weeks. Articular pain intensity was measured with Visual Analogical Scale-VAS (Scott Huskisson, 1976) and quality of life with questionnaires SF-36 Health Survey and Nottingham Health Profile-NHP, administered two months before treatment (T0), the day before treatment (T1), at the end (T2) and after one month (T3).

Results: After 4 weeks of treatment (T2), there was a significant improvement in the group of patients undergoing traditional MAIT® treatment, both in terms of pain reduction and quality of life improvement, compared to the control group. The benefit was maintained one month after the end of the MAIT® treatment (T3).

Discussion: Manipulative treatment according to the MAIT® Method may have beneficial effects in Crohn's patients with seronegative arthritis comorbidity.

Crohn’s Disease (CD) is an Inflammatory Bowel Disease (IBD) characterized by transmural inflammation of the Gastrointestinal (GI) tract. It may involve any part of the GI tract from the mouth to the perianal area and typically manifests a relapsing and remitting course [1]. The etiology remains uncertain, but it is hypothesized that genetic, environmental, endogenous gut bacteria and immunological factors play important roles [2-9]. The Autonomic Nervous System (ANS) modulates GI motility, secretion and mucosal immunity. Psychological stress and anxiety were postulated to possibly trigger IBD activity by inducing changes in motor, sensory and secretory GI function, increasing intestinal permeability, and modulating immune function, possibly through vagus-mediated cholinergic activation inhibiting pro-inflammatory cytokine secretion [4-11]. There is increasing evidence that stress and autonomic abnormalities may be a possible target for intervention in IBD [12-17]. In this context, fluctuations in heart rate beat-to-beat intervals, designated as Heart Rate Variability (HRV) is known to be governed by vagal and sympathetic tone cross-interaction, making HRV a well-recognized parameter reflecting ANS activity and vagal tone [18-20]. Decreased HRV has been associated with elevations in circulating levels of C-Reactive Protein (CRP), interleukin (IL)-6, tumor necrosis factor, and other inflammation markers, known to be associated with CD etiogenesis [7,21].

Control subjects were healthy volunteers recruited from among hospital staff or from individuals accompanying patients to a clinic visit. All subjects were older than 18 years. Individuals with known cardiac disease such as congenital disorders, valvular dysfunction, conduction dysfunction, ischemic heart disease, or congestive heart failures at any degree were excluded. Individuals with endocrine dysfunction including thyroid dysfunction and diabetes mellitus were excluded. Individuals with known neuropathy, diabetic, or other were excluded. The use of medications affecting cardiovascular system and conduction including antiarrhythmic of any group, beta blockers, calcium channels blockers, or any sympathomimetic medication were also an exclusion criterion. Patients younger than 18 years were also excluded. The patients were all suffering from Crohn's disease and had been diagnosed with enteropathic arthritis for at least 1 year. The study was conducted in accordance with the ethical principles originating from the Declaration of Helsinki, in compliance with Good Clinical Practice and according to local regulations. All patients enrolled in the study provided written informed consent. The study was conducted from November 2017 to April 2018.

Subsequently, values were collected again after one month (T2) and after two months (T3).

VAS: The visual analogue scale or Visual Analog Scale (VAS) is a psychometric response scale which can be used in questionnaires. It is a measurement instrument for subjective characteristics or attitudes that cannot be directly measured. When responding to a VAS item, respondents specify their level of agreement to a statement by indicating a position along a continuous line between two end-points.

A review came to the conclusion that VAS was one of the best adapted pain scales for pain measurement in visceral pain [22]. Visual Analogue Scale (VAS) is a measurement instrument that tries to measure a characteristic or attitude that is believed to range across a continuum of values and cannot easily be directly measured [23]. It is often used in epidemiologic and clinical research to measure the intensity or frequency of various symptoms [24]. For example, the amount of pain that a patient feels ranges across a continuum from none to an extreme amount of pain. From the patient's perspective, this spectrum appears continuous ± their pain does not take discrete jumps, as a categorization of none, mild, moderate and severe would suggest. It was to capture this idea of an underlying continuum that the VAS was devised [23].

Questionnaires for the evaluation of the QOL

Many of the most widely used international tools, both generic and specific, are now available, translated into Italian and suitably validated. Some of these instruments have already been or are currently applied in gastroenterological studies and are therefore available for evaluation within outcomes research studies, controlled clinical trials or simply for one's own clinical practice. The questionnaires we have chosen to use in this study are described here.

SF-36: The SF-36 Health Survey is the most widely used questionnaire in the world, having been applied in many diseases, including Crohn's disease. The questionnaire consists of 36 questions that combine to form 8 scales: physical function, role limitations due to physical problems, physical pain, general health, and vitality, role limitations due to emotional problems, social activities, and mental health. For each scale the score ranges from 0 to 100 and higher scores correspond to a better quality of life. It is also possible to calculate two summary scores, one concerning physical functionality, the other mental functionality, standardized with respect to a normal value of 50 ± 10 for this tool are available the regulatory data relating to the Italian population, divided by age group and gender [25].

MAIT® method: The MAIT® method is a manipulative medicine that acts on the mechanisms that regulate inflammation [27].

Among the population, the use of drugs is constantly increasing, with an ever-increasing expense for the citizen and for the public purse [28]. Among the most consumed drugs, we find anti- inflammatory drugs, and this fact is not surprising if we consider that many pathologies that afflict people have at their base an inflammatory process. Moreover, about 40% of Italians suffer from one or more chronic diseases, an alarming increase compared to last year [29].

The most common diseases or chronic conditions are: hypertension, arthrosis, arthritis, allergic diseases, osteoporosis, chronic bronchitis and bronchial asthma, type 2 diabetes [29]. Numerous studies have shown that at the base of all these diseases there is an important component of inflammation [30-34].

With manipulative techniques according to the MAIT® method, the well-known neurovegetative reflex pathways of inflammation control are triggered, thus positively influencing the patient's symptoms [35-38].

The MAIT® Manual Anti Inflammatory Technique® is a method of manipulative medicine that aims to trigger the body's antiinflammatory processes. A session consists of three phases: the first one is diagnostic, the second one unlocks the vascular fulcrum and the third one is an anti-inflammatory technique.

In the first phase of diagnosis, after the anamnesis, postural evaluations and orthopedic and osteopathic tests are carried out to highlight any lesions and/or mobility restrictions. The history is collected during the first visit, but evaluations and tests are repeated at each session.

In the second phase, the vasculonervous fulcrums that are positive for the tests, i.e. the muscular, fascial or tendon structures that have physiologically relevant anatomical relationships with the vessels and nerves are treated with manual techniques. A maximum of 6 of the following techniques could be applied to the patients in the study: thoracolumbar fascia, iliopsoas muscle, pyriform muscle, diaphragm, inguinal ligament, abductor muscle, pectoral muscle, biceps femoral muscle, quadriceps femoral muscle, popliteal muscle, gastrocnemius muscle, soleo muscle, subclavian muscle, pectoralis minor muscle, scalenus anterior muscle, scalenus medialis muscle, corachobrachialis muscle, biceps brachial muscle, triceps brachial muscle, teres maior muscle, supinator muscle, pronator teres muscle, In the third phase the anti-inflammatory technique is performed, the stimulation through nerve manipulations. The manipulations are carried out in direct technique (with action on the nerve), in reflex technique (sensory stimulation), indirect (with direct contact on structures in anatomical-physiological relationship with the nervous tissue).

The main clinical characteristics of the patients at entry are given in Table 1.

NHP: Please note that the value obtained will be between 0=very good situation and 100=critical situation.

The values relative to the NHP test of the control group have remained substantially unchanged from T0 to T3 (Table 3 and Figure 2).

The mean values for the MAIT® group have been generally reduced ( Table 4 and Figure 3).

VAS: The average values of the VAS-Pain have remained unchanged in the control group, while there has been a slight reduction in the values in the group undergoing the trial (Figure 4). 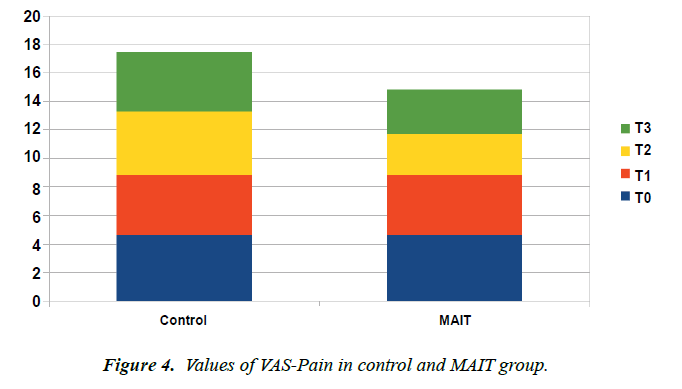 Figure 4. Values of VAS-Pain in control and MAIT group.

Being a preliminary study we have chosen to use scales that examine quality of life and level of perceived pain, so as to verify the effectiveness of the MAIT® method by observing any changes in the perception of the quality of physical and mental life of people.

Analyzing the NHP test data we can see that the averages of the individual values analyzed have undergone a significant reduction in patients undergoing manipulative treatments according to the MAIT® method (Figure 5).

Figure 5. Mean values NHP test in Control and MAIT groups. Please note that the value obtained will be between 0 = very good situation and 100 = critical situation.

Analyzing the SP-36 test data we can see that the averages of the individual values analyzed have undergone a significant growth in patients undergoing manipulative treatments according to the MAIT® method (Figure 6).

The VAS mean values remained s in the control group, while a decrease was observed in the group that also underwent manipulative treatments according to the MAIT® m ethod (Figure 7). 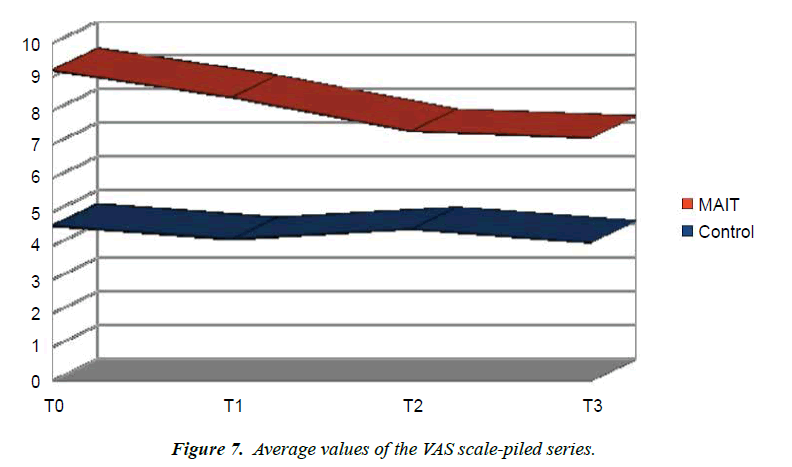 This experiment served to verify whether the MAIT® method in addition to standard drug therapy was effective in managing symptoms and increasing the quality of life of patients with Crohn's disease and IBD-related seronegative arthritis.

We chose to include only chronic patients with s symptoms in the study, so as to identify the reason for the variations in the MAIT® technique.

Analyzing the data, it is clear that subjecting Crohn's patients to manipulative therapy sessions according to the MAIT® method may change the clinical conditions of patients for the better, in addition to the standard pharmacological treatment. However, due to the small sample number, further experiments would be necessary to better analyze the situation.