Aim: The present study aimed to evaluate the effect of Twelve Meridian Cordyceps Correlated Compounds (M12CCC), a new functional food, on glycemic control in patients with Type 2 Diabetes Mellitus (T2DM). Methods: The subjects recruited 30 patients with T2DM aged 30-75 years from Outpatients completing 90d trial. The 30 cases received M12CCC 4.5g/d for orally three times a day (1.5g/bag in 100 mL hot water before 30 min of each meal) for consecutive 90 d. Their base-line value including fasting plasma glucose (FPG), glycated hemoglobin (HbA1c) and oral glucose tolerance test 2-hour plasma glucose (OGTT2hPG) and these indexes value after intervention for 30 d,60 d and 90 d was measured. Results: Excluded the base-line value of HbA1c <6.5% cases because of blood glucose are controlled stably generally. The base-line value of HbA1c is more than 6.5% in 23 cases which compared with that value after treatment for 90 d showed that HbA1c declined 0.5% (P=0.001). FPG of treatment for 30 d, 60 d and 90 d differently compared with the base-line value indicated that there were no significant differences (P =0.603, P =0.233 and P=0.783). However, OGTT2hPG of treatment for 30 d, 60 d and 90 d was markedly decreased compared with the baseline value (P=0.000, P =0.000 and P=0.005) with no time-dependent manner. Body composition including body weight, BMI, TG, TC, UA, Muscle mass, fat mass, bone mass, body fat percentage, waist-hip ratio and visceral fat were no significant differences between baseline and 90 days. Conclusion: M12CCC has a strong regulating effect on decreasing HbA1c and OGTT2hPG to poor glycemic control patients.

Type 2 Diabetes Mellitus (T2DM) is a metabolic disorder mainly among adults from multi-factorial mechanisms, which commonly occurs from 20 to 79 years especially 35 to 40 years old [1]. T2DM has been a major global health problem after cardiovascular diseases and cancer for its serious complications and heavy financial burden of longterm. According to the number of T2DM approximately 8.8% among adults in 2017 (20-79 years). It is predicted that incidence will be 48% of adults by 2045 all over the world and 59.3 million cases in China by 2025 [2].

Up to days the etiology and pathogenesis of T2DM are still unclear. Over-weight is widely regarded as a direct relevant risk factor which mainly linked to an unhealthy diet including more sugar, higher fat and lower fiber at ordinary times than recommended intake. T2DM patients produce less insulin or more inefficient insulin than normal which leads to glucose metabolism disorder rooting in a somewhat degree of increasing insulin resistance and β-cell dysfunction [3].

At present, the main treatment of T2DM in clinical is to control diet, exercise, oral medicine and insulin injection. Nevertheless, oral medicine and insulin injection easily form long-term dependence and increase health care costs. Diet and exercise are fully implemented by self-management. However, the efficiency of self-management more depends on the patient’s age, knowledge, economic factor, education and social supports. In reality, many patients fail to carry out diet control and exercise followed doctor's advice [4]. Many clinical study results showed that T2DM and its associated complications can be prevented or delayed through regular intake of functional foods which can help glycemic control and insulin resistance.

As a new resource and functional food, Twelve Meridian Cordyceps Correlated Compounds Cordyceps militaris is a kind of edible fungus and traditional medicine in China to be widely used in clinical for invigorating the lung, benefiting the kidney and strengthening [5]. Biological active compounds of Cordyceps militaris mainly include cordyceptic acid, Cordycepin (3-deoxyadenosine) and cordyceptic polysaccharide which are a benefit for insulin resistance, immune system, anti-inflammatory, antibacterial, antioxidant even antitumor (M12CCC) was developed by Chinese National Engineering Research Center for industrial microbial fermentation technology and approved by Chinese Food and Drug Administration in 2014 (No.sc106350020500414) in which cordycepin content exceeded 21000μg/g from a screened high yielding cordyceps militaris strain for more than 3 years. As acknowledge cordyceps militaris is benefit for glycemic control but there are rare system evaluations and reports. In this report, we evaluate M12CCC effect on glycemic control in patients with T2DM with a before-after self-control study [6].

From July 2018 to July 2019, 30 participants were recruited from outpatients in Guo Yi Tang of Fujian University of Traditional Chinese Medicine. All individuals were diagnosed with type 2 diabetes according to the International Diabetes Federation 2012 global guidelines aged from 30-75 years old (Table 1). All participants were fasting plasma glucose (FPG) ≥7.0 mmol/L (126 mg/dl) or 2h plasma glucose ≥11.1 mmol/L 200 mg/dl) with typical symptoms including drink more, polyuria, polyphagia and weight loss [7]. Moreover, their blood glucose controlled stably by orally hypoglycemic drugs with a long-term daily dosage or diet control. They were all willing to become involved in this clinical trial. Patients were excluded who were type 1 diabetes or can not control their diet to interfere with the study results, pregnant woman or suckling period woman had serious and critical complications or psychosis. Patients with these symptoms were also excluded such as diabetic ketosis, acidosis and acute infection during the past three months or they took drugs including glucocorticoids and others affecting blood glucose metabolism. Patients who were allergic constitution or allergic to edible fungi were excluded. All patients were not requested to signed the informed consent of ethics committee because M12CCC is a functional food not a drug. However, all participants were informed of each item of this study and voluntarily enrolled into the study [8].

A before and after self-control study was used to evaluate the effect of M12CCC on glycemic control in patients with type 2 diabetes. At last 30 eligible cases were screening from 56 patients enrolling for this study. First, the general information of each participant such as blood glucose level, gender, age, course of disease and type of hypoglycemic drugs to take daily were registered by the researcher [9] and then researcher informed them diet precautions according to their daily routine and labor intensity. During the test of 90 days participant took their hypoglycemic drugs as usual and noticed daily diet. If after eating M12CCC blood glucose level decreased sharply, they need to adjust hypoglycemic drugs dosage according to the doctor's advice [10].

Specifications of M12CCC: 1.5 g/bag, 63 packages/kit; Ingredients: Cordyceps militaris Compounds including cordycepin, nucleoside, ergosterol peroxide, Se and superoxide dismutase (SOD), as a new resource and functional food was approved by the Chinese Food and Drug Administration in 2014 (No.sc106350020500414). The research and development department was the Chinese National Engineering Research Center for industrial microbial fermentation technology. M12CCC produced by Xiamen Yuanzun Bioengineering Co., Ltd. A start strain of Cordyceps militaris from Changbai Mountain was mutated by UV and BEI for more than 5 rounds and screened by 96-plate and HPLC for growth rate, yield, and impurity content etc (strain bleeding flow chart in (Figure 1). Administration: one bag dissolved in 100 mL hot water took orally half an hour before meal for three times every day. There were 3 courses that each course included 30 days for taking 20 days then stopping to take 10 days [11]. (Table 2) 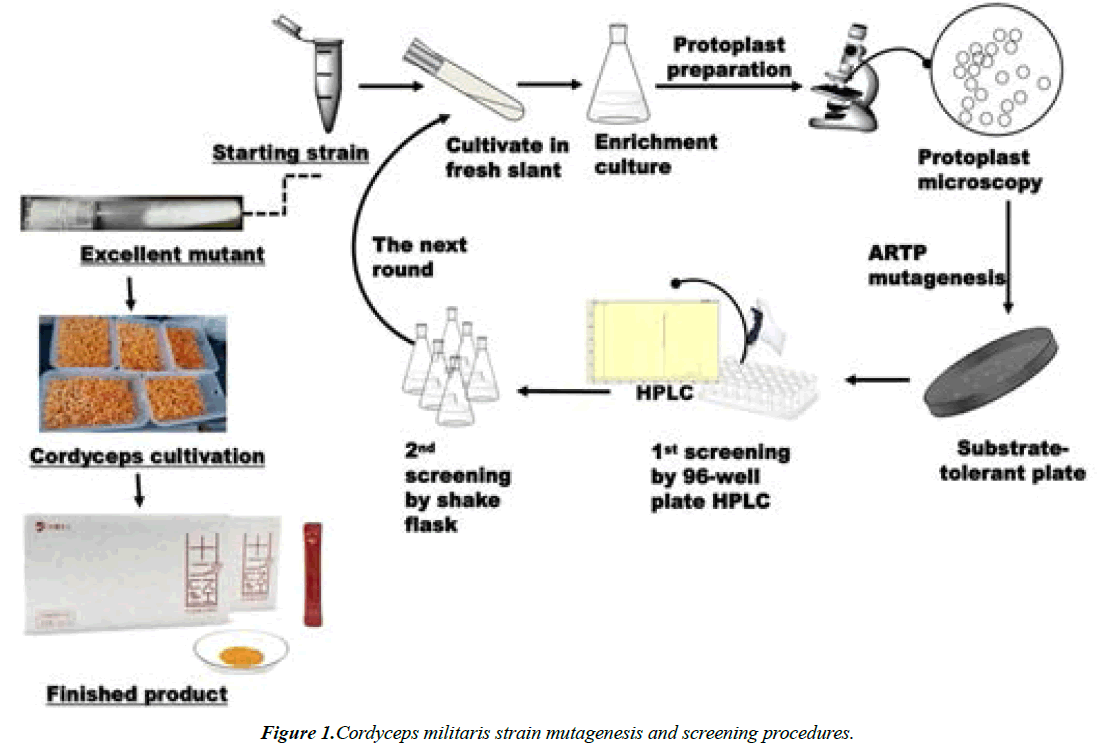 Starting strain was firstly rejuvenated, cultured and protoplasts were prepared by hyphae. Atmospheric and Room Temperature Plasma (ARTP) was used to mutate the starting strain and then mycelium and adenosine content were used as different kinds of marker to screen mutant strain. After five rounds of protoplast ARTP combined with 96 well plates- HPLC as screening assay, FY1421 was obtained. Its yield of adenosine reached 44.5mg/kg mycelium dry weight and the content of cordycepin reached up to 24.4mg/kg. At last, FY1421 was selected to produce functional food of M12CCC [13].

All data related to the participants were analyzed by the SPSS Statistics software 22 (IBMCorp.Armonk,NY,USA). Quantitative data were [14]. Consistent with the normal distribution analyzed by Paired Student’s t-test. But it did not meet the normal distribution analyzed by a 2-related sample nonparametric test. Results were shown as means ± SD or median with 1/4 confidence intervals (25% CI, 75% CI). All tests were two-sided and p < 0.05 was considered significant [15].

Table 3. The effect of M12CCC on FPE level of 30 cases in different time.

The effect of M12CCC on FPG level of plasma

According to the results of the FPG level on the baseline in 30 cases, this mean value was about 7.3% and the median was about 6.9%. Normality test for data distribution found that difference value between baseline and 60 days was nonnormal distribution so a 2-related sample non-parametric test was selected to explore significance between baseline level and 60 days level. The results showed that there was no significant differences between the baseline level and 30 days, 60 days and 90 days (P=0.603, P=0.233, P=0.783.

The normality test for data distribution showed that the difference between baseline and 30 days, 60 days and 90 days were all normal distribution. The paired sample t-test found that OGTT2hPG level was the significant difference after taking M12CCC for 30 days, 60 days and 90 days compared with baseline value (P=0.000, P=0.000, P=0.005, (Table 4). Results showed that M12CCC declined OGTT2hPG value at different degrees in no time-dependent manner.

The effect of M12CCC on body composition: Except for HbA1c, FPG and OGTT2hPG, we also detected body composition items including body weight, BMI, TG, TC, UA, Muscle mass, fat mass, bone mass, body fat percentage, waist-hip ratio and visceral fat on the baseline and 90 days. However, there was no significant difference between baseline and 90 days of all the above indexes.

Cordyceps militaris is the majority among more than 400 species Cordyceps which centrally distributed in northern and western China. In China, Cordyceps militaris is a kind of edible fungus as well as traditional Chinese medicine according to the Modern research and clinic used of common Chinese medicine. It was reported that Cordyceps militaris contained many kinds of pharmaceutical components such as cordycepin, Cordyceps polysaccharide, nucleosides, oxalic acid, ergosterol, cyclopeptide, multiglobulin, organic selenium, SOD enzyme and vitamins. Among this cordycepin and Cordyceps polysaccharides are the most important active compounds accounting for its anti-tumor, anti-inflammatory, improving body immunity, preventing aging, anti-oxidation and glycemic control.

Besides the high content of cordycepin, M12CCC also contained higher content cordyceptic polysaccharide, SOD and Se than wild strain production. Animal experiment results showed that Cordyceps militaris exhibited hypoglycemic effect through scavenging free radicals, improving the antioxidant ability and repairing dysfunction islet β-cells In this study, we found that M12CCC decreased HbA1c level of 23 cases T2DM with HbA1c > 6.5% but no effect on including HbA1c < 6.5% after 90 days intake compared the baseline value which suggested that M12CCC helped poor glycemic control patients. And if it is possible we will recruit more patients of T2DM patients to avoid bias and deficiency of small samples. It is worth noting that in this study two patients who frequently had hypoglycemia never showed that symptom while they took M12CCC.

The results showed that M12CCC has no obvious effect on reducing FPG and has a significant effect on controlling OGTT2hPG for taking 30 days, 60 days and 90 days. It is probably that M12CCC effect on helping hypoglycemic drugs keeps blood glucose stable after a meal which needs more cases to observe in the future.

Moreover, the results showed that M12CCC has no significant effect on body composition items which perhaps caused by recruited case conditions. Among 30 cases, Most of them have no abnormal TG, TC and UA which probably leads to a bias. Such as weight, BMI, muscle mass, percentage of body fat, fat mass; bone mass and waist-hip ratio, etc. were no significant differences before and after taking M12CCC 90 days just because treatment time is relatively short. As a functional food not medicine M12CCC maybe need a long-term intake to produce an accumulation effect.

M12CCC showed some certain hypoglycemic or synergistic hypoglycemic effect in T2MD for 90 days of intake. And these results supplied a puece of basic evidence for a randomized controlled trial with more cases and longer time to evaluate the definite effect of M12CCC on glycemic control.

Supplement Table The effect of M12CCC(a) on body composition for 90 days.