Two-spotted cricket Gryllus bimaculatus (Orthoptera: Gryllidae), an hemimetabolous insect species, is one of the most economically significant cricket species in the world. It is used as feed for poultry and fish [1]. It can be easily bred outdoors. Recently, it has been used as a model insect for tissue regeneration, neurophysiology, and behavioral research in biomedical field [2].

Muscles in the body are divided into three major types: skeletal, cardiac, and smooth. Among them, skeletal muscles are the most abundant tissues. They mainly function by muscle contraction-relaxation activation. As part of the endocrine system, skeletal muscles produce various myokines associated with metabolism, growth, and disease [3,4]. Histologically, skeletal muscles contain a network of sarcoplasmic reticulum (the endoplasmic reticulum, ER) that plays a significant role in maintaining homeostasis [5]. Globular actin monomers can polymerize to filamentous actin to form a double-helical structure that is longitudinally oriented with tropomyosin (Tm) [6]. One troponin complex binds to every seventh actin monomer. The complex has three regulatory proteins: troponin C, troponin C, and troponin T. Troponin C (TnC) binds to a calcium molecule [7]. Troponin I (TnI) is the inhibitory subunit while troponin T (TnT) binds to Tm [8,9].

Starvation is one of the most common stresses that insects encounter. It especially has serious effects on small-bodied insects. Thus, it is essential for insects to adapt to starvation by metabolism through various mechanisms, including gene regulation and enzyme (protein) modification. It is known that starvation influences expression levels of several genes such as allatotropin in the oriental armyworm, Mythimna separata, different mitochondrial genes in the mosquito, Aedes aegypti, and tissue-specific genes in the wood ant, Formica exsecta [15-17]. Starved insects are more susceptible to pathogens due to their compromised immune systems (e.g., Colorado potato beetle, Leptinotarsa decemlineata) [18]. During starvation, differential gene expression in skeletal muscles has been reported in vertebrates, with ER-stress associated gene as a potential mediator of anabolic resistance [19].

Normal cricket rearing basically followed Dr. Nagata’s method [20]. Fifth-instar larvae of the two-spotted cricket G. bimaculatus used in this study were obtained from the Rural Development Administration of Korea (Jeonju, South Korea). Only male adults were reared at 28-30°C with humidity of 70% under a 10 h/14 h light/dark photoperiod in transparent plastic cylinders (diameter of 9 cm and height of 10 cm). Crickets were fed a commercial feed suited for rats and rabbits (1:6) with unlimited water supply. Crickets with synchronous growth from the fifth instar to adult emergence were selected. Only males were used in the following experiments. Due to cannibalism, each vial contained only a male cricket. For starvation classification, crickets were allowed free access to water. However, they were not fed for three to five days. Five crickets were anesthetized by exposure to CO2 gas for dissection. To observe muscle tissues, specimens were processed for hematoxylin and eosin (H&E) staining according to standard protocols [21] and analyzed by virtual microscopy (Nikon Eclipse E600). Insects of the control group were reared under normal breeding conditions as described above until the following experiments.

When ventral aspect was observed under a light microscope, two milk-tinted DLMs in an elongated triangular shape with the apex attached to a keel-like phragma protruding from the anterior margin of the pterothorax were found (Figure 1A). Major tracheal trunks were located at the ventral margin of DLMs. Whitish columnar shaped DVMs ran vertically against DLMs to generate power for wings’ upstroke by contraction. DWMs were pinkish compared to the other two types of muscles (DLMs and DVMs). They ran parallel directly above DLMs. Histological features of muscle groups were observed after H&E staining. Skeletal muscle fibers were cut longitudinally and transversely (Figures 1B-1D). Three types of muscles exhibited commonly typical skeletal features histologically, with peripheral nuclei lying just under the sarcolemma. Among them, DVM had a specific empty space between dense muscle bundles to reduce total weight of the muscle for flight. 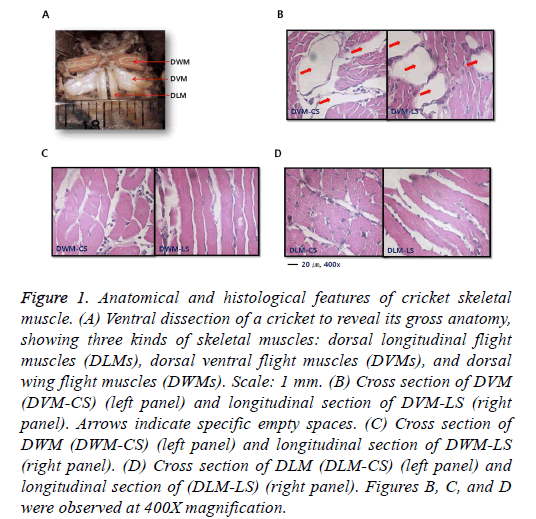 Animals respond to starvation by searching for new food resources or by reducing energy consumption. Although animals do not die initially at the onset of starvation, they undergo physiological changes until mortality. To overcome starvation, insects have developed a mechanism to convert fat decomposition into energy source through muscle proteolysis [22]. Proteolysis is primarily responsible for increased skeletal muscle protein breakdown during starvation and the resulting amino acids can be used to synthesize new proteins required for survival to maintain normal several pathways [23-25]. Insects that are relatively small in body size are sensitive to environmental changes. They have developed unique survival mechanisms.

To understand changes of gene expression in skeletal muscles induced by starvation, expression levels of troponin complexes genes (TnI, TnC and TnT) and Tmp in G. bimaculatus skeletal muscles (DLM, DVM, and DWM) were determined. During starvation, there were no significant changes in gene expression in DLM or DWM (Figures 2B-2C). However, there were significant changes in gene expression in the DVM (Figure 2A). Levels of gene expression were gradually increased more than two-fold after five days of starvation compared to those in the control group. It was unclear why high levels of gene expression induced by starvation only occurred in the DVM. Based on anatomical position, the DLM is not exposed or sensitive to environmental changes because it functions like a skeleton that maintains body form. The DWM is directly attached to the wings and its function is flight related. DVM is a specialized muscle that responds conservatively to metabolic changes to maintain energy reserves and avoid predators by flight. 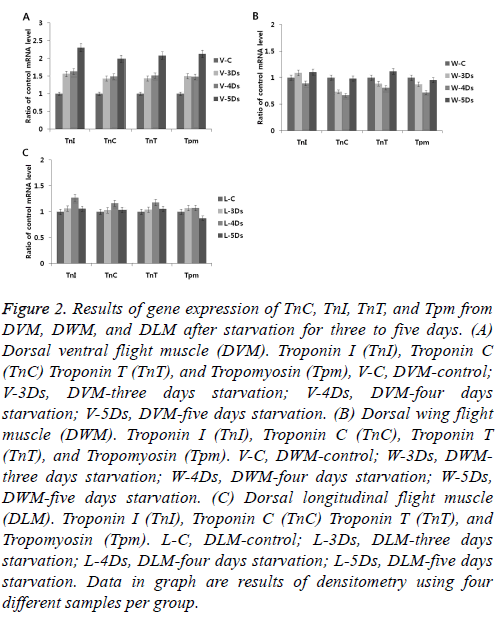 Glucose in the feed is the most significant substrate for ATP biosynthesis and glycosylation of proteins through posttranslational modification in the ER. To maintain ER homeostasis, UPR as one of specific pathways is commonly developed in eukaryotic cells. It involves three distinct ER transmembrane sensors (IRE1, PERK, and ATF6) that are downstream components of ER lumen chaperones [26,27]. Activation of IRE1 (autophosphorylation and dimerization) that regulates cleavage of X-box DNA-binding protein (XBP) mRNA will produce an activated form of XBP1 and activate PERK. Activation of PERK then induces phosphorylation of the α sub-unit of eukaryotic translation initiation factor 2 (eIF2α) and ATF6 that is cleaved by ER stress. This action results in N-terminal cytoplasmic domain binding to ER stressresponse element (ERSE) and ATF6 sites to enhance the expression of ER molecular chaperone genes.

Starvation induces activation of UPR. It is interesting to know how different skeletal muscles (DLM, DVM, and DWM) respond to ER stress in relation to starvation. After starvation for five days, skeletal muscles were tested for gene expression of ER chaperones (BiP, calreticulin, PDI) and an ER stress sensor of ATF6. As shown in Figures 3A-3C, significant gene expressions (at approximately two-fold higher) of ER chaperone and ATF6 were only observed in the DVM at three to five days after starvation compared to those in the control. This result is similar to results of gene expression of troponin complex and Tpm induced by starvation as described above in Figure 2. It is known that gene expression is up-regulated in the skeletal muscle under starvation conditions through concomitant expression of ARF4 and decorin which promotes proliferation of myoblast through an ER stress-related pathway [28]. Up-regulation of ATF4 mRNA is controlled by phosphorylation of eIF2α induced by simulation of ER stress [29]. Short-term starvation stress (but not severe) has beneficial effects on various positive contributions of longevity, fungal resistance and climbing activity [30]. Therefore, we also examined gene expression of decorin, one of proteoglycan type myokines produced and released by skeletal muscle cells (Figure 3D). Starvation for five days (12 percent of cricket's life span of 42 days) induced ER stress, but not a strong stimulus to induce apoptosis. This suggests that relatively short-term starvation does not interfere with normal muscle physiology, including normal production of myokines such as decorin. However, if strong starvation persists, ER stress responder will induce abnormal muscle physiology through apoptosis. 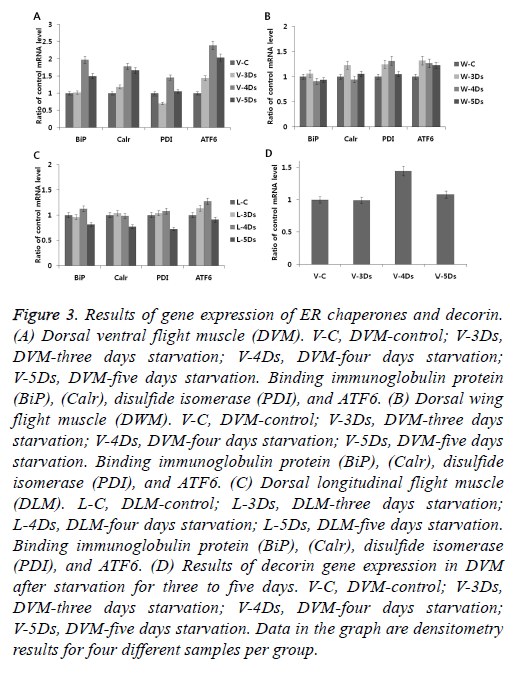 In summary, three kinds of muscles (DLM, DVM, and DWM) in a cricket of G. bimaculatus were commonly characterized by a typical skeletal muscle. Starvation only induced upregulation of gene expressions of ER chaperones (BiP, calreticulin, and PDI), ER transmembrane sensor of ATF6, troponin complex (TnC, TnI, and TnT), and tropomyosin (Tpm) in DVM, but not in DLM or DWM. DVM is affected by ER stress due to starvation. It produces decorin that is essential for skeletal muscle physiology. The precise mechanism of this result is unclear. Further experiments are needed. When studying gene expression affected by starvation, comparing three different skeletal muscles of the same physiological state within one individual is very important.

This study was supported by a grant from the Agenda program (PJ010864), Rural Development Administration, Republic of Korea.