The current study was to assess the influence of a different type storage conditions and preservative seed vigor and temperature storage method in retaining the viability of seeds of Acacia species had been successfully prophesying germination demand in several threat categories and seeds were limited store-controlled conditions due to early damage. Seeds of four A. species were stored at room temperature stored, cold stored, Arial and underground stored for a period of 0, 4, 8, 12, 16, 20 and 24 months. The results revealed that the degree of dormancy variation among the species, they were 81% for A nilotica, 74% for A. seyal, 15% for A. mellifera and 5% for A. senegal. Further, the studies were exhibited germination affected by storage time. Room storage temperature presented significantly declined in germ inability. Even more, the cold, aerial and underground storage conditions indicated effective method for preservation of A. seeds and maintenance of seed viability and storability for 24 months of storage. However, there were very few differences in response to break dormancy treatments before and after 24 months storage. As the storage period advances, A. seyal, A. mellifera and A. senegal there were progressively reduction in hard seed percentage from the beginning of the 4 months of cold, aerial and underground storage. The different responses may be reasonable by the reduction of the seed degradation in breaking dormancy and germination behavior into the room, cold, aerial and underground storage conditions can be utilized how these species might respond to environmental change, and also, used for the formation of artificial seed banks of A. species. Therefore, the aerial seed storage affects germination behavior of small seeded halophytes, further, aerial seed storage may protect seeds from detrimental salinity effects, insects and fungal are the major causes for quantitative and qualitative losses.

Acacia species are growing natively in Savannah regions, there are more important sources recorded to be useful for timber, forage, gum, food, fuel, firewood, fiber, tannins, medicine, ornamentals, shade, shelter, domestic utensils, handicrafts, nitrogen fixing, soil stabilization, Agroforestry system, as well as environmental protection. Acacia seeds storage perhaps advantageous for good quality seed as well as can be harmful if the seed is of less quality, seeds will probably store for longer periods without deterioration if saved at low temperatures. The main objective of natural condition seed storage is to secure the support of good quality seed for planting and restoration programmers whenever requested. Several species produce seeds at long intervals, limiting from a few years to many years. To assure seed supply among the period between two good seed crops, a seed stock must be established [1]. Moisture content and temperature are particularly more important factors affecting the longevity of seeds and influencing the rate of deterioration [2]. The literature pertaining to the studies on effect of seed storage of Acacias is reviewed. There seems to be an association between plant ecology and seed storage behavior, it is evident that species that show recalcitrant seed storage behavior do not occur naturally in habitats that are deserted and savanna.

In some species, part of the seed with physical stored at room temperatures for several months or years becomes permeable [3,4]. Shields held at 20°C retain viability and remain soft for up to five years [5]. The evidence suggests that cold storage of 5°C is necessary to arrest the set of seed coat dormancy [6]. Long-term dry storage at room temperatures may promote the breaking of physical dormancy [7]. In these environments, the most of plant species indicated orthodox seed storage behavior, while a few indicated intermediate seed storage behavior [4]. The advantages of treating seeds before to storage it seems that, little to indicate the long period consequences of storing seeds for the non-dormant mean [8,9]. Seed conservation is ordinarily classified into two groups: ex situ and in situ [10]. Ex situ protection preserves the vegetal material exterior on the natural environment. Ex situ conservation way consists seed banks, in vivo banks and in vitro banks [11], ensuring its preservation in viable condition also saving it genetically completely for long term [12]. On the other hand, in situ method conserve the biological diversity when the management and preservation of species in the natural environment [13]. However, aerial 16seed storage are potentially the most important source of propagules for sexual regeneration in woody wetland plants, given that the seeds of woody wetland plants are often under-represented in the seed storage of wetland sediments [14,15] and that aerial seed storage have been demonstrated to play a critical role in sexual recruitment of many taxa of woody plants in terrestrial forests [16,17]. Therefore, the role of seed storage in maintaining floristic diversity in freshwater wetlands has been examined in a very large number of studies [18,19]. Further, the undergroundstorage in perennials might be important for seed development [20]. Besides, there is an urgent need to explore and develop a use for deep-underground space due to the predicted exhaustion of resources in the shallow depths of the Earth’s surface [21,22] , When the seeds deteriorate during storage, they loss their vigor and become more susceptible to environmental stresses during germination and finally are not able to germinate. The aging speed is affected by genetic and environmental factors such as temperature, seed’s moisture content and quality [23]. In other hand, the seed vigor reduces during maturity, harvesting and storage depending on temperature and moisture and gradually deteriorates [24]. The current paper describes and evaluates the impact of different types of storage condition and temperature for germination of selected Acacia seeds, in order to identify the longevity and storability in retaining the viability of seeds of Acacia species.

Seeds of Acacia seyal, A. nilotica, A. senegal and A. mellifera, were collected from Western Sudan and imported to the laboratory of the College of Pastoral Agricultural Sciences and Technology, Lanzhou University, China. During September 2016, Seeds were selected by sorting out the healthy, uninfected seeds of almost uniform size.

Influence of temperature on germination

Germination was carried out before and after the final of the storage experiment incubated at 20°C in incubator lighting for 12 hours a period. Samples of four replicates of 50 seeds were used for each treatment in the experiment and placed on top of 2 layers of filter paper in 90 mm Petri dishes. A seed was considered to have germinated when the radical extension was at least 0.5cm. Seeds were evaluated according to the ISTA Rules. The experiments were laid out in a completely randomized design. Comparisons in germination performance across different seed pre-treatment methods. Were made using one-way ANOVA in SPSS version 19.0.

Table 2. Effect of room, cold, aerial and underground storage condition on seed germination of A. nilotica during 24 months.

Table 1. Effect of room, cold, aerial and underground storage condition on seed germination of A. seyal, during 24 months.

Table 3. Effect of room, cold, aerial and underground storage condition on seed germination of A. mellifera during 24 months.

Table 4. Effect of room, cold, aerial and underground storage condition on seed germination of A. senegal during 24 months. 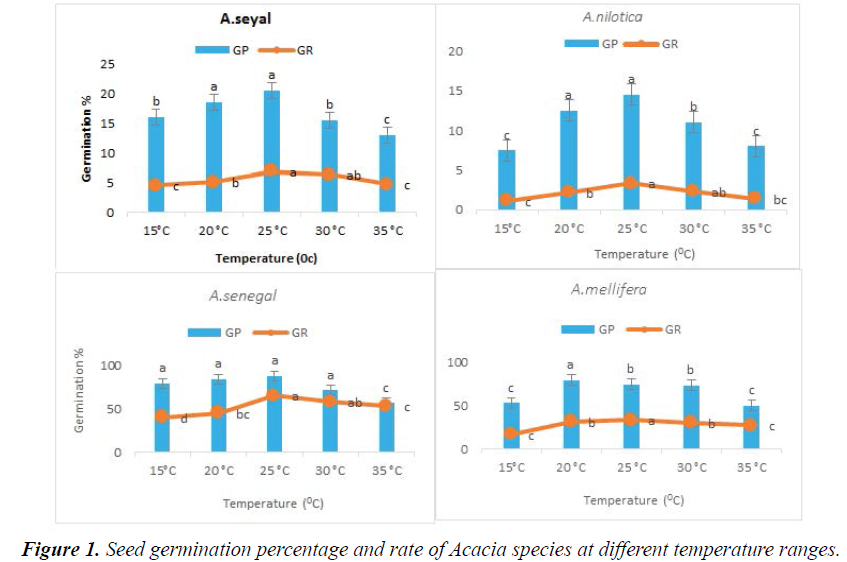 germination under the different condition’s storage tested, and germination after 24 months storage. The recorded, evidently performance the existence of room, cold, aerial and underground storage condition correlated variation in the seed germination behavior of those A. species and a significant influence of period of room, cold, aerial and underground storage on germination. Dormancy has broken within the room; cold, aerial and underground storage exposed two main groups of species, indicating contrasting germination behavior in decreased or increased germ inability. In the whole two comparisons depicted the storage condition may strongly influence seed germination. The distribution of seed germination percentages revealed that the cold, aerial and underground storage is the more effective condition for dormancy broken compared to the room storage condition duration of seed storage. Seeds by deep and no deep physical dormancy was stored below room, cold, aerial and underground store conditions, timing of sowing, there were three stages to consider. Firstly, dormancy loss can exist room and cold storage, but it can not to be complete, some of the seeds can change non-dormant and remain dormant. Secondly, the rate of dormancy broken becomes different between the species. Thirdly, several seeds can lose viability within the room and cool storage, also again we had shown that can vary among the species and collection area. Furthermore, the moisture content of the seeds is one of the most important factors determining seed longevity during storage [25,26,1]. Seed survival during the period of longevity varies greatly within species. It can also vary between accessions among a species due to differences in genotype and location. Affected by the area in potential longevity recorded from the environment during seed harvesting, maturation, duration of drying, time of seed harvest, pre-storage environment and the period of seed storage [27- 30]. Besides, studies about the long-term viability are requested for the storability of those Acacia seeds in the gene bank. The different storage conditions response may have affected by many factors, including seeds structure, intrinsic physiological characters of each species and environmental factors such as temperature, moisture content and humidity [31,32]. Therefore, the temperature responses of the plants to view the environments which they are adaptable. Even more, differences within the species have substantial ecological significance [33]. Species from tropical regions ordinarily require high-level temperature for germination in temperate species. The optimal temperature for germination of four Banksia species has been positively correlated together with mean annual temperature in the area of seed originates [34]. For the current study the seed germination of Acacia species completely more tolerant of low temperature. In conclusion, the cold, aerial and underground conditions of seed storage for A. nilotica, A. senegal, A. mellifera and A. seyal remained completely viable among 24 months of storage. However, the room, storage condition gradually declined seed viability during 24 months of storage and did not maintain seed viability. The variation within cold, room, aerial and underground storage may be due to differences in the storage conditions, temperature and moisture content. There were very few differences in response to break dormancy treatments before and after 24 months storage. According to these findings, storing seeds of a permeable seed’s dormancy of A. senegal and A. mellifera, revealed does not change germination and this fascinates significant interest to the current seed-based restoration programs and promoted seed use effectiveness. The potential of dormancy broken to find among cold, room, aerial and underground storage must be considered when examined on initial seed dormancy were conducted maybe when seeds from different locations were stored before to propagating plants. It is to suggest that fresh seeds must be used after collection before proceeding for experimentation. Although, the aerial seed storage protects seeds against granivores, help seed dispersal over time and maintain seeds in a favorable microhabitat.